At this 2021 online edition of CES, AMD won an Award and the CEO gave a keynote speech. It’s a big year for the company.

AMD’s “Ryzen™ 5000 Series desktop processors” won one of this year’s CES “Best of Innovation” Awards. The Innovation Awards are part of an annual competition “honoring outstanding design and engineering in consumer technology products.” The processor is “built on cutting edge ‘Zen 3’ technology, providing unmatched compute power and exceptional performance-per-watt thanks to its ground-breaking 7nm architecture,” according to their CES Innovation Award Profile.

Dr. Lisa Su, President and Chief Executive Officer of AMD (Advanced Micro Devices), showed up to give the keynote speech. She spoke about how technology has been changed by the pandemic, as well as AMD’s newest projects and some of their collaborations with other companies. 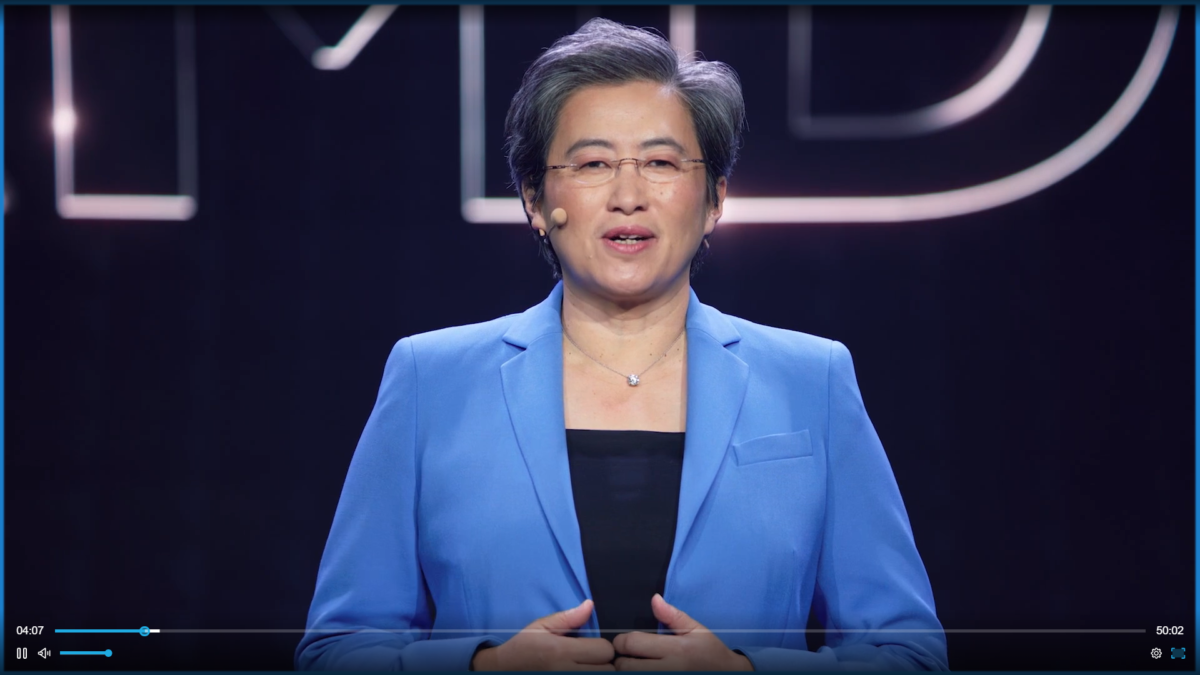 Her intro touches base with the current state of the world. She says that “2020 was perhaps one of our most productive years.” The increased dependence on technology in a socially-distant world accelerated “the pace of our digital transformation.” We have “transitioned to the new normal.”

One example she presents is the rise in video collaboration. She explains that “Zoom users are approaching three and a half trillion minutes of meetings per year. Cisco Webex meeting participants recently hit 600 million per month and Microsoft Teams is now supporting 115 million daily users.” This is only one example of many, but it showcases how “the pandemic has elevated technology to become an essential part of how we live, work, play and communicate.”

Naturally, this transformation has placed “significantly higher demands on our digital infrastructure.” She explains that “at the center of all this technology is high-performance computing”

She brings up a live video of Panos Panay, chief product officer of Microsoft. She mentions that they have been collaborating over Microsoft Teams and so he seems very familiar to her, despite having not met in “real life” during this time. Panay talks about how he has been “learning to work differently” in a world where a meeting might include the sound of his dogs “barking in the background.”

He believes that “PC is becoming more essential.” It has expanded beyond “a productivity tool” into something that is used “to connect with other humans and people in general.” He aspires to “help tech disappear into the background,” as they move forward and “continue to push the boundaries.” 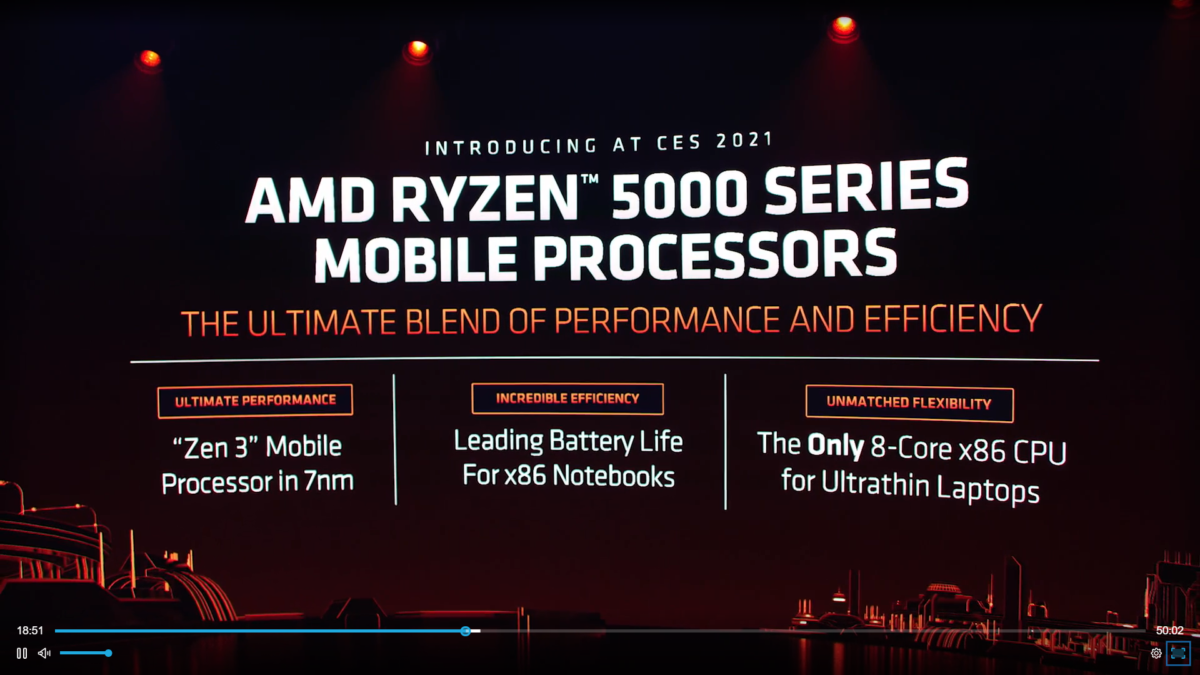 They also discuss Microsoft’s gaming partnership with AMD. Panay states that “AMD’s momentum right now is incredible” and he describes their partnership as “two teams coming together.” AMD has created “high-performace CPUS and GPUs for the x box series x and series S.”

Another AMD innovation that will be helpful to gaming is the “AMD ryzen 5000 series mobile processors powered by our new zen 3 core.” AMD Zen 3 Ryzen 5000 “increases our lead in overall performance and energy efficiency and also delivers the best single threaded performance,” according to Su. This should lead to more powerful laptop gaming or any other creative uses.

AMD expects “more than 150 ultrathin gaming and professional notebooks powered by Ryzen 5000 series to launch this year.” The first are anticipated to go on sale in February. As a result, AMD will have “ultrathin notebooks all the way up to super computers” with extremely high levels of performance.

The next guest to appear on a video screen is Francois Chardavoine, VP of Technology at Lucasfilm. Su explains that that Industrial Light & Magic (ILM), Lucasfilm and AMD have worked together “for more than a decade” and that they were “an early adopter of AMD EPYC ThreadRipper.”

Chardavoine says that, recently, demand has been on the rise for video entertainment so “content creation is through the roof.” They have “built an entirely new studio from scratch in Sydney, Australia.” One very important part of the facility is “the render farm.” The render farm is where they have the computing “firepower that creates all of the images that you see on screen.”

The pandemic has elevated technology to become an essential part of how we live, work, play and communicate Click To Tweet 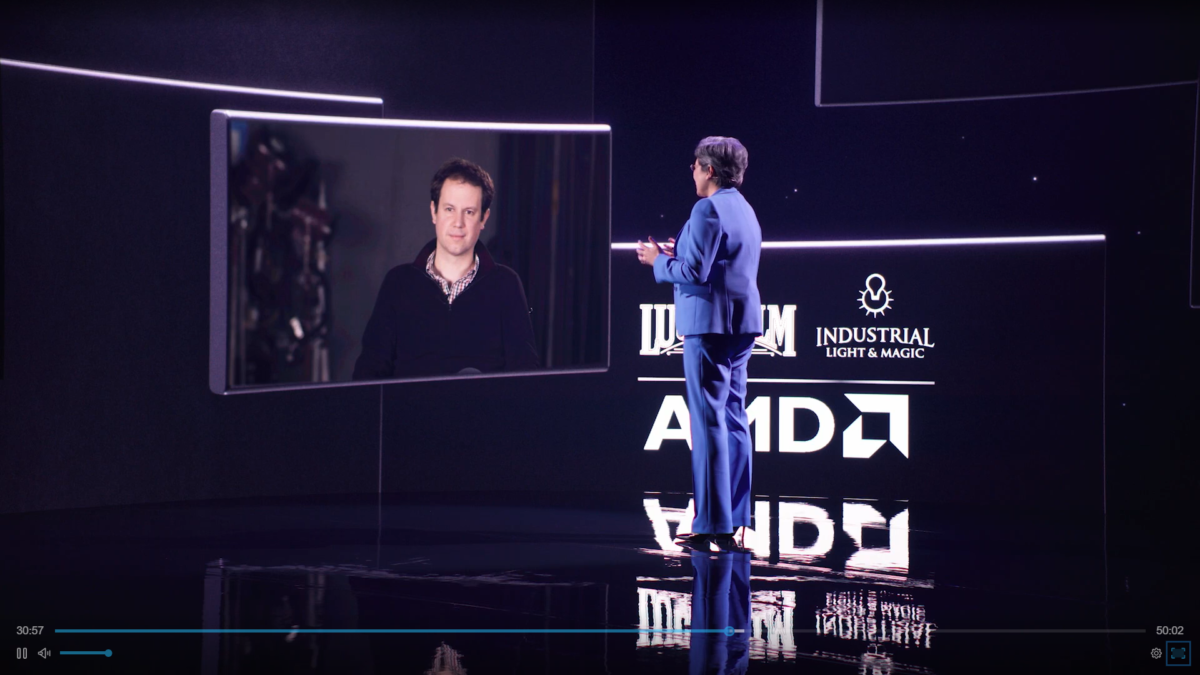 The Sydney, facility will be exclusively AMD. Chardavoine explains that they chose AMD because “we just need as much firepower as possible” and “the amount of threads and cores that you have available is unprecedented and this really helps us deliver the content that we have.” He explains that current software is being designed to take full advantage of that “firepower” “in a way that software never has before.” The artists can make changes and see immediate results leading to a more “intuitive sense of what they are working on.

Overall, there’s a lot happening for this company. People are increasingly dependent on their home computer setup and that benefits companies like this. Their Innovation Award and partnerships may be good signs for their immediate future. It seems like they have an interesting year coming up and it should be exciting to see how that works out for them and what they bring to the table next year.

Flexispot Adjustable Standing Desk Pro Series Standing desks are all the rage now and I...

A Q&A with Rich Carlton, President and CRO of Aunalytics, a data platform company that...

How do we bridge the distance that screens put between us and make remote interactions...

How greentech can help companies to decarbonise By Kevin Chin, CEO and Founder of VivoPower...

Lush gives its app a fresh new look and some innovative functionalities to welcome customers...

Camo is an app that makes you look your best in your video calls without...

This year is bringing some exciting technology trends that will help designers create more engaging...