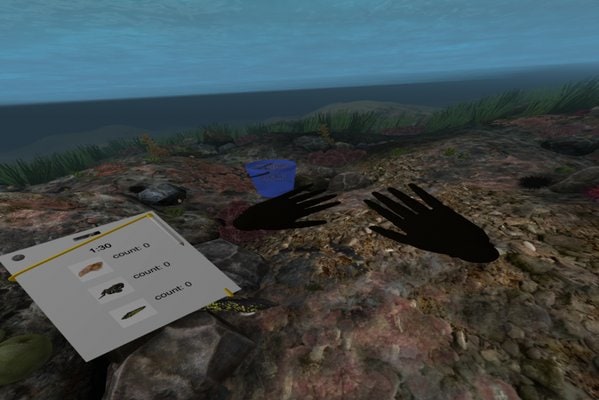 Might seem far-fetched, but VR has been proven to increase feelings of empathy. Researchers at Stanford’s Virtual Human Interaction Lab are now using this immersive technology to make people connect with the impact they are having on the environment.

“This is the most exciting thing we’ve ever done in VR.” High praise indeed coming from Jeremy Bailenson. As the founding director of Stanford University’s Virtual Human Interaction Lab (VHIL), he has conducted hundreds of experiments over the past 20 years on how virtual reality shapes human interaction, regularly collaborating with Silicon Valley companies and consulting with government agencies. When the U.S. Supreme Court recently debated the effects of immersive media, it was his book Infinite Reality they quoted. It’s probably safe to assume, then, that professor Bailenson really knows what he’s talking about.

We arrived at the sunny Stanford campus on a Thursday afternoon, the entire team was scrambling to finish The Crystal Reef, a VR film project being premiered at the Tribeca Film Festival that weekend and all demos had been canceled. But since we’d traveled all the way from England, we got a private tour instead, so all’s well that ends well.

Having previously tried various experiences on the Samsung GearVR and Google Cardboard, I wasn’t exactly a “ViRgin,” but the souped-up HTC Vive setup at the lab still blew me away. Over the next half an hour, I “walked the plank” over a simulated pit—surprisingly scary in spite of the fact you KNOW there’s no drop—experienced an earthquake, danced with Elmo from Sesame Street, and flew around a simulated city, just like Superman. Up until I smashed head-first into a concrete building, that was possibly the most fun I ever had.

Watching nature’s greatest wonders fade before your eyes, and knowing that you’re at least partially to blame, might not be most people’s idea of fun, but the overall experience is hopeful Click To Tweet

But the lab’s work is not just about fun. Its mission is finding out how these immersive experiences can be applied to improve everyday life in all sorts of areas such as conservation, communications systems and empathy. And the power of VR to generate empathy is exactly what the Crystal Reef project explores.

The Crystal Reef demo is in two parts: a 360 video followed by an interactive experience. The video starts with an aerial view of the rocky reefs of the Italian coastline of Ischia. Then suddenly I’m on a boat listening to marine scientist Fio Micheli. At first I can’t see her, and it takes me a little while to realize that I’m facing the wrong way and she’s behind me. That’s actually one of the things I love most about VR video: Just like in real life, you have to look around, interact with your environment and make sense of things for yourself. But it’s when the demo moves underwater with the HTC Vive that the interactivity really kicks up a notch.

Cody Karutz is the Stanford graduate student who created the reef project, a collaboration between the VHIL and Hopkins Marine Station. It’s effectively the cinematic rendering of his thesis research, designed to study how virtual reality can be used to communicate climate change in an immersive and scientifically valid way. He hopes it will help bring awareness and behavior change to the topic of ocean acidification—the process by which the ocean becomes more acidic as it soaks up carbon dioxide released into the atmosphere.

Karutz’s previous projects included tagging live fish in the kelp forests of California’s Monterey Bay and transferring their movement data to create avatars—digital representations linked to real-world creatures—in virtual reality. Studies showed that people engage more with those avatars than pre-programmed agents, so they wanted to see whether this applied to animals as well. (It did: People felt much more upset as the fish disappeared when they thought they represented real-world fish.) The goal was to eventually let people adopt those fish, creating a more personal connection with the ecosystem. He believes that virtual reality has definite advantages in the type of conservation experiences it can create.

“We put users in places they wouldn’t normally have access to, so it does away with that sense of psychological distance. We can also speed up the effects so that the process of a reef disappearing can be experienced in a few minutes rather than 100 years,” Karutz says.

When experienced in—excuse the pun—full immersion this is pretty powerful stuff. The navigation with hand movements is part of what Karutz calls “embodied cognition.” “When you use full body motions with all limbs you create higher engagement and learning,” he explains.

In the video Micheli explains that the hardest part of a conservationist’s job is making people care. The whole Crystal Reef simulation is designed to make you do just that, and it works. I was left with a palpable sense of loss as the reefs disappeared and morphed into what scientists call an “ocean moonscape.” No wonder filmmaker Chris Milk called virtual reality the “ultimate empathy machine” in his recent TED Talk. We’re much more likely to care about something if we feel like we’re more than mere spectators.

Linden Lab CEO Ebbe Altberg knows a thing or two about that. His company has been managing open-world virtual platform Second Life (SL) for over a decade. The fact that SL is profitable and still attracts around a million users a month in spite of its age and technical limitations is a testament to the enduring appeal of those virtual environments. Second Life ’s success is now funding Linden Lab’s new VR venture named Sansar.  Altberg plans for Sansar users to be able to easily create and share their own VR experiences, and he’s enthused about bringing fully immersive content to the masses:

“In VR, I’m now inhabiting that avatar, because it’s my hands moving, it’s my face moving. Now you’re not seeing dolls, you’re seeing humans. Having that experience is a whole different thing. It’s exciting, it’s scary, and it could even be traumatic.”

VHIL researchers have also found that virtual reality is much more powerful than traditional media in changing behavior, even getting people recycle more or eat less meat. In one experiment, participants took a “virtual shower” and were given visual feedback (such as images of burning coal) based on the amount of energy they used to heat and transport that virtual water. When washing their hands in the physical world afterward, participants exposed to this vivid imagery consistently reduced their hot water consumption.

Bailenson and the Crystal Reef team are hopeful this will make a real difference to marine conservation, specially now that virtual reality is attracting such interest, and the popularization of the technology will allow these messages to be delivered to a mass audience:

“If you show someone the consequences of their actions in virtual reality, it makes them rethink their physical behavior,” says Bailenson. “With concepts like climate change, or deforestation, or even pollution, we can use virtual reality to make the relationship between human behavior and their consequences less abstract and more concrete.”

Watching nature’s greatest wonders fade before your eyes, and knowing that you’re at least partially to blame, might not be most people’s idea of fun, but the overall experience is hopeful: It’s in our power to do something about it. And that is what VR is all about, turning us from passive spectators to active agents in a changing world shaped by our actions.

VR developers want you to feel something when you hear reefs are dying https://t.co/Lamn0nDT59 pic.twitter.com/qkq6T5mf2P