It’s easy to look at the state of affairs in the world today and despair that we’ll ever live to see a world of gender equality, or even one where girls don’t grow up feeling like fear, abuse and mockery are their rightful lot in life.

Yet in today’s business climate, companies need a dynamic and diverse workforce more than ever. Those who do not champion equal representation are missing out on a big opportunity to maintain their competitive edge and outperform their peers.

Which makes this year’s International Day of the Girl Child theme – “With Her: A Skilled Girlforce” – so appropriate. It is based on the paradox between the need for educated and skilled workers in the future and the number of young women in employment, training or education, drawing attention and investment for girls to gain those skills, experience and employment.

Women are consistently underrepresented in the science and technology fields, making up only 15 per cent of the workforce in research. Factors such as implicit and explicit biases, lack of role models and quality mentoring all have an impact on the number of women applying for roles in STEM. The growth in the number of female graduates was just 3.1 per cent between 2015/2016 and 2016/2017, whereas the growth in male graduates was 9 per cent.

“Across STEM, the gender imbalance remains intolerably high. Women are being overlooked for appointment to senior positions and this is having a detrimental impact on the next generation of talent to lead technological innovation. The absence of appropriate role models for girls leads to a lack of confidence in their ability, and inevitably, causes bright and talented individuals to turn their backs on promising careers in technology,” says Lindsey Kneuven, Head of Social Impact at Pluralsight.

Now is the time for women to use this momentum to press for equal footing across science and technology, she adds. “It’s the twenty-first century and barriers to employment — whether it’s gender identity, ethnicity, sexual orientation, age or physical ability — should not exist.”

Kneuven believes that girls have the power to create freedom, equality and opportunity around the globe. But in order to get there, we must open up the technology skills learning that will deliver significant, lasting social impact.

“Women and girls of all ages and all circumstances have the right to thrive through equal access to education. And in today’s digital world, this means learning how to harness technology to deliver the progress that will create a better future for us all.”

On some levels there do appear to be encouraging signs: According to the latest findings from UCAS, women in the UK are 35% more likely to go to university; there are 66,840 more women now on degree courses than men, compared with 34,035 in 2007. Women attending uni outnumber men in 112 of a total of 180 subjects including psychology (81.7%), social work (88.3%) and academic studies (88.7%). Nursing remains the most female-dominated subject with 90.5% female students in 2017.

Women are consistently underrepresented in the science and technology fields, making up only 15 per cent of the workforce in research Click To Tweet

Yet there is still a very long way to go. The 2017 WES survey found that only 11% of the engineering workforce is female (although this was up from an even more appalling 9% in 2015). There has also been some progress according to some recent research by  Fresh Student Living which found that women currently make up 47% of employees in some STEM subjects, with a quarter of the jobs in mathematical sciences and 13% in engineering positions, as the infographic below shows.

When Microsoft surveyed 11,500 women between the ages of 11 and 30 in 12 countries across Europe about their attitudes to STEM, it found that although many were interested in the subject early on, they tended to lose interest by the age of 15, highlighting the importance of providing hands-on experience and female role models in primary and high school.

“Unfortunately, there is a self-perpetuating cycle whereby women are put off by a career in technology that is seen to be too male dominated an industry. The resulting impact is a lack of women applying and forging a career in a sector that has so much to offer,” says Laurie Presswood, an intern working in the corporate legal team at Dell Technologies. She believes it is vital that the industry addresses its gender imbalance and puts practices in place to encourage women to develop their careers in technology. 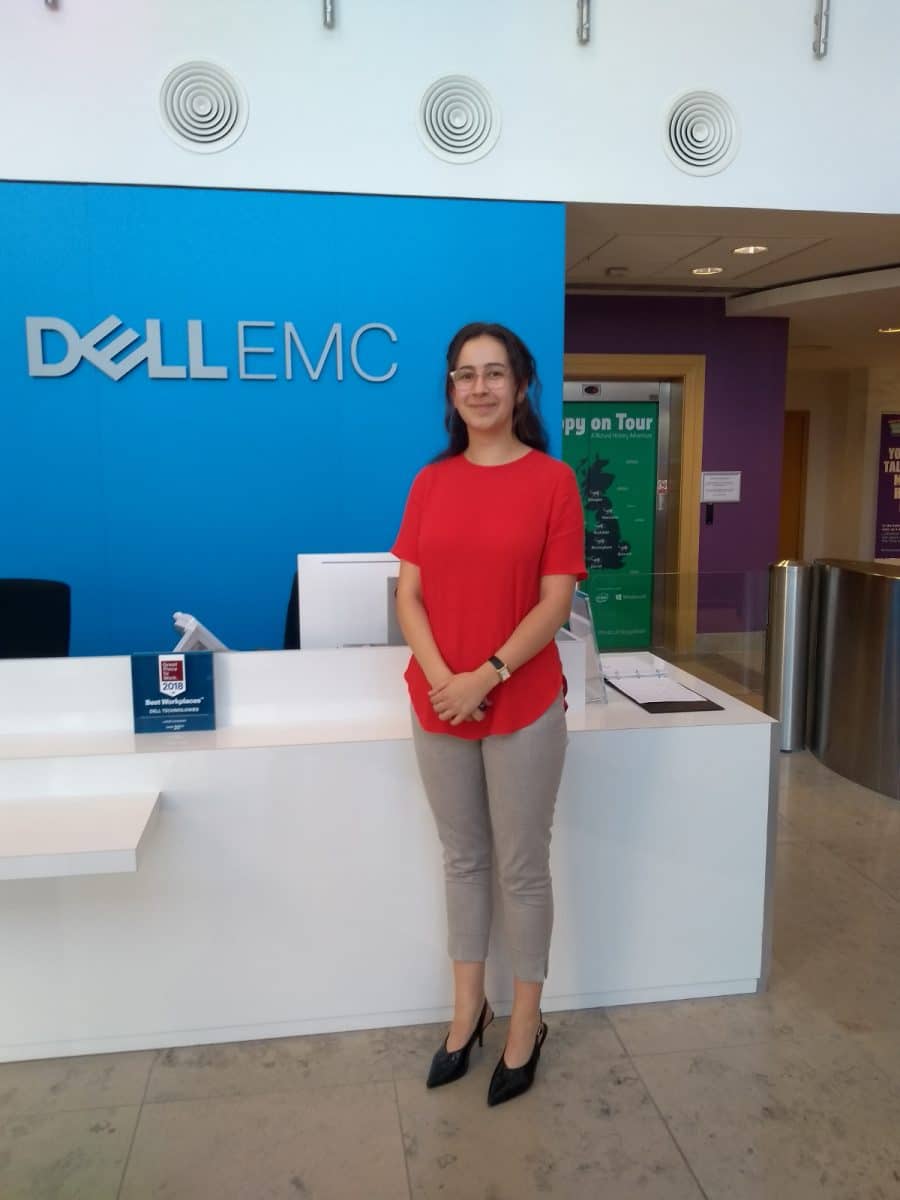 “A huge number of my male friends went into IT jobs after studying computing, but not one of my female friends took the same path. It wasn’t until a family member discussed their experience as a woman working within the technology industry that I started to consider the number of different roles open to me.”

That change, she adds, needs to come from the very top, and she points to the example of her own CEO Michael Dell, who is part of the Catalyst CEO Champions for Change, striving for gender equality and inclusion in the workplace.

“Working for a business like this that truly values its female staff is helping to slowly change the perception of women working in tech,” Presswood believes.

Meanwhile, many other organizations are pioneering programmes specifically aimed at addressing those enduring imbalances for the next generation of girls.

Launched in 2009 by the Clinton Global Initiative, G(irls)20 aims to place young women at the centre of decision- making processes. through programs which make strategic investment in them through education and training, building networks, and access to opportunity both at home and abroad.

G(irls)20 works in partnership with over 50 organizations, selecting applicants who show leadership, analytical skills, and the ability to create innovative solutions to the economic challenges facing the world. It envisions a world in which women and girls are able to participate fully in the economic growth, political stability and social innovations of their countries.

These initiatives include the annual G(irls)20 Global Summit which happens this weekend. Two of the extraordinary group of 20 young women chosen to represent their countries at the global summit are:

Diana, is a Electrical Engineering and Computer Science student. She focuses on the fields of Robotics and Biomedical Engineering and already has achieved her first scientific publication. Diana holds several awards from National and International Robotics Competitions, as well as an Olympic Distinction. Currently, she is working as an Educational Robotics instructor of school teams, participating in national and international robotic contests, which require knowledge of physics, mathematics, and programming principles. In addition, Diana is the founder and general manager of Unique Minds, a non-profit (NPO) whose purpose is to assist students and young adults to identify and follow their ideal academic path. She has been awarded twice as Greek Women of the Year between 18-23 years old.

Zeynep is a Electrical and Electronics student at one of the best university in Turkey. She is passionate about engineering coming from an engineering family, and has been part of global projects for over 10 years. Together with her family, Zeynep’s started with her Comenius project which hosted an Italian and two Indian girls. She has been a volunteer in AIESEC for 6 months and has recently been approved for a volunteer project on marketing and management in Brazil.

A related G(irls)20 Girls initiative is Girls on Boards, which invests in changing the status quo for women at decision-making tables in communities across Canada. And speaking of girls on boards, change is not all about grand global movements. There’s a huge role that grassroots initiatives can play, and every individual has the power to make a difference, as I found when I met the amazing folks at Board of this at a recent event hosted by Skullcandy in London. 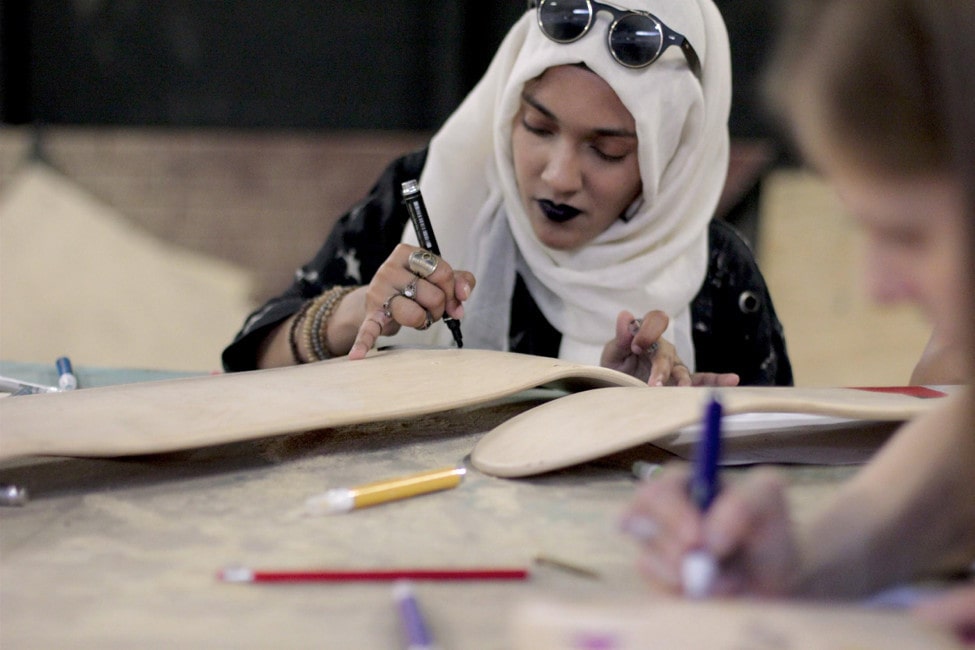 We just have to do what works, and whatever it takes so that our daughters and granddaughters don’t also grow up in a world of #Metoo Click To Tweet

This creative start-up – headed by skateboard engineer and designer/maker Ash Baigent and illustrator/artist Rae Smith – uses creativity and skating as tools for empowerment and unity, shining a light on issues such as female empowerment and mental health.

“Our mission is to bring people together from all walks of life and our workshops provide a platform for discussing issues that often divide people – allowing them to express themselves in new ways, explore their creativity and give themselves permission to communicate within a friendly, supportive and open atmosphere,” Ash and Rae told us. 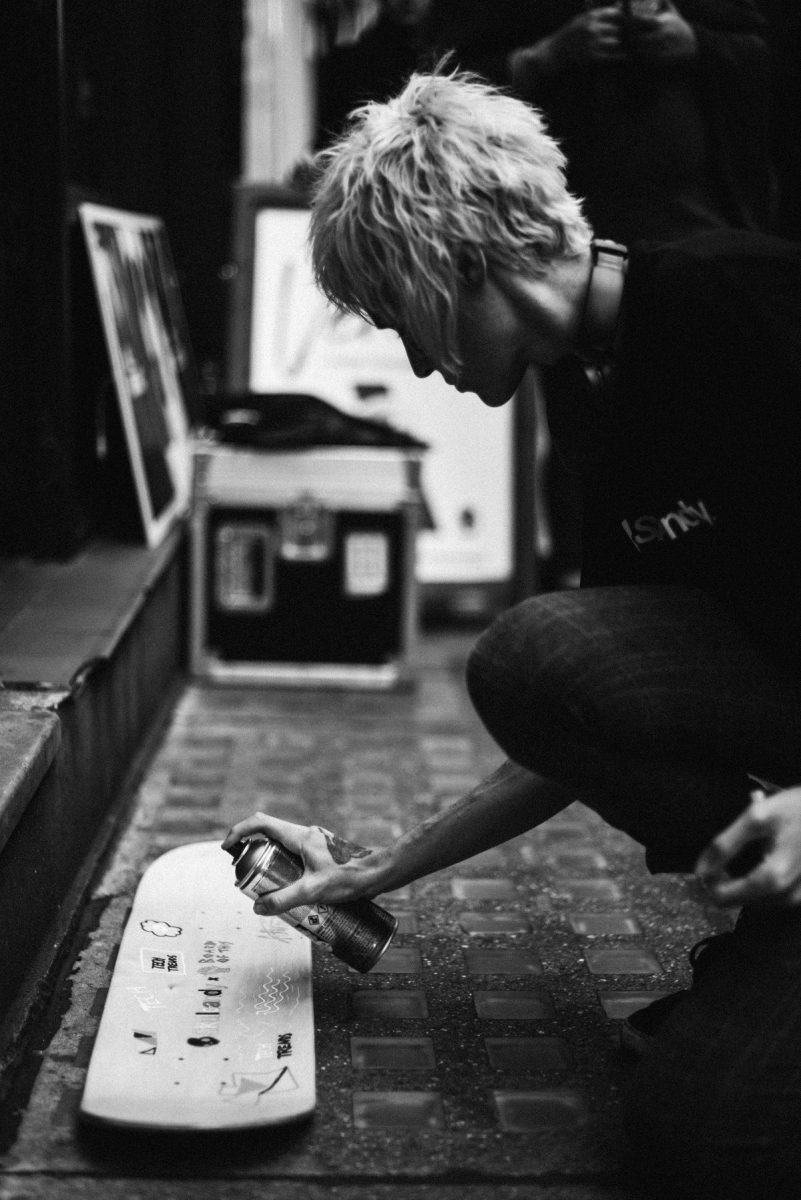 As one of the girls who attended a recent workshop recounts, she loved the concept of ‘reclaiming the skateboard’. 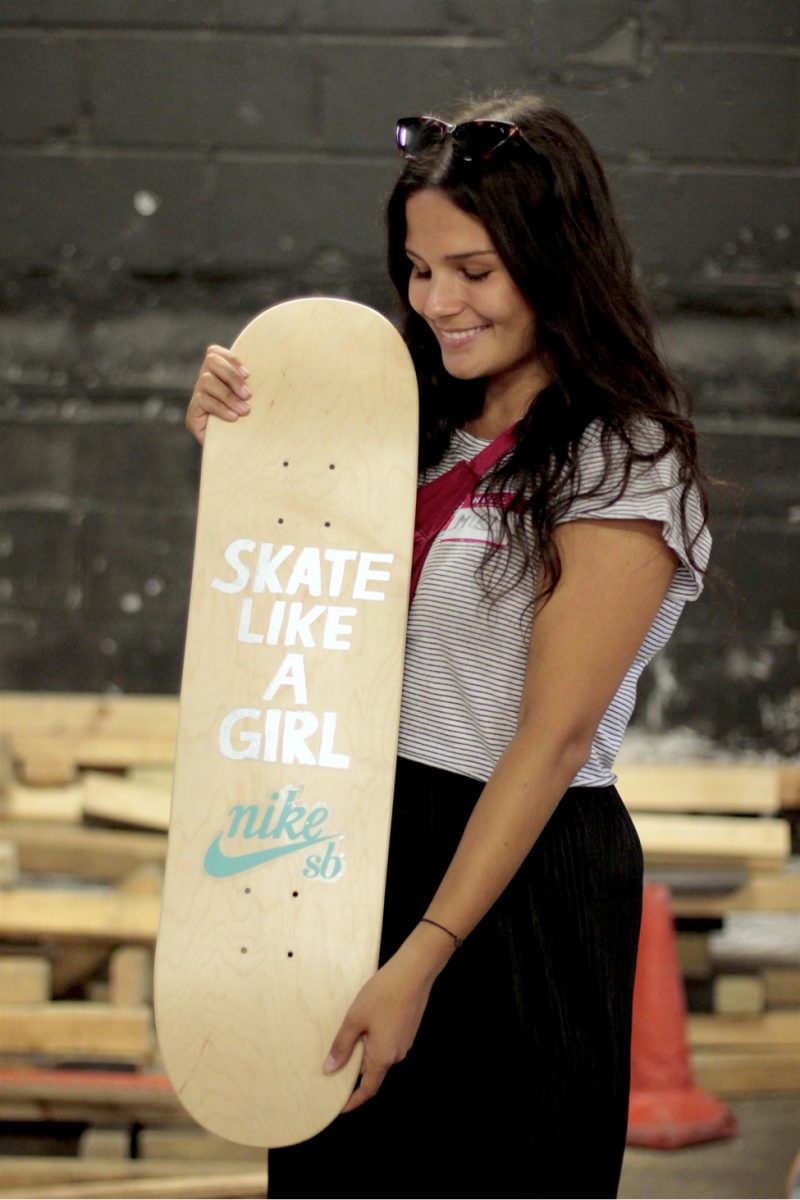 “I now feel more confident to learn skateboarding, and I’m inspired by the growing community of female skaters. The more female skaters can get together, the more empowered we will feel,” she says, proving that there isn’t one magic formula for supporting girls and give them the confidence to achieve their goals and dreams. We just have to do what works, and whatever it takes so that our daughters and granddaughters don’t also grow up in a world of #Metoo 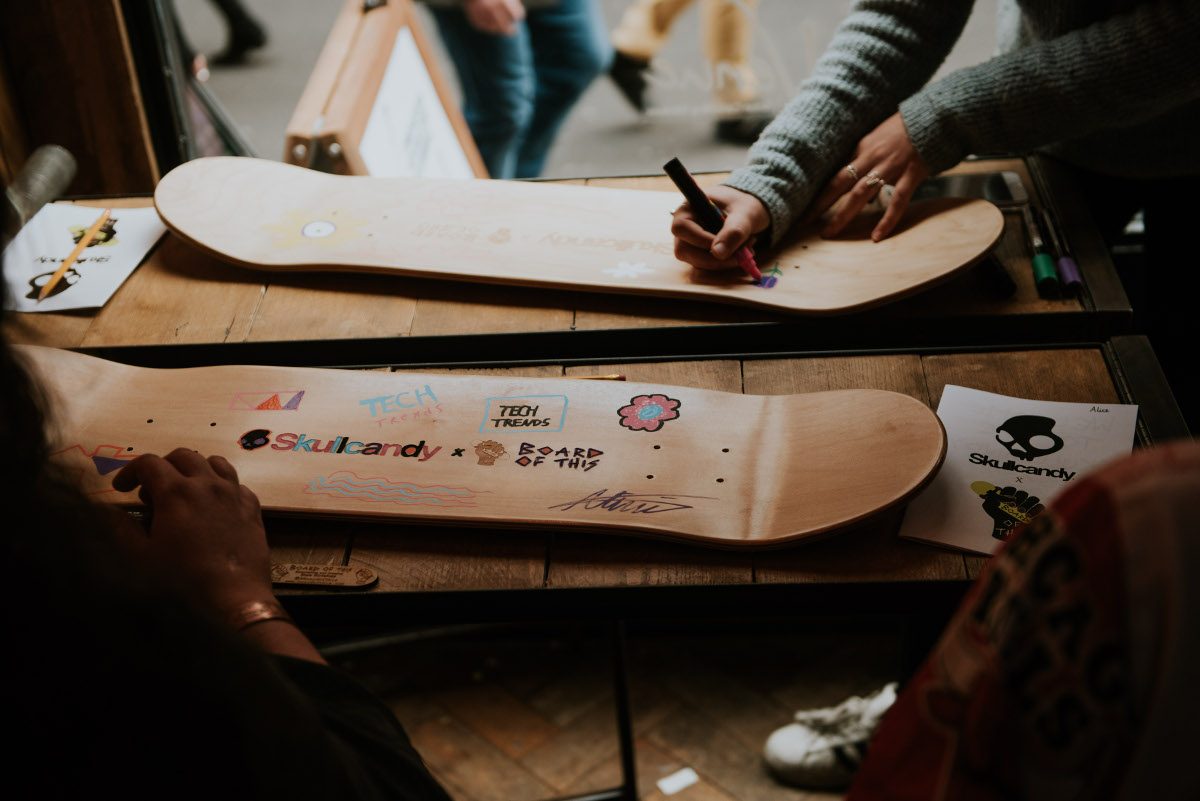 “For this year’s International Day of the Girl, I hope that women around the world will begin to look at STEM careers as an area where their skills and personalities are as appreciated and valued as men’s,” concludes Presswood.

We can only hope. And fight. And VOTE. Because this, is not OK.

2 out of 3 girls in the UK have been sexually harassed in public.

It’s not a compliment. It’s not part of growing up. It’s not ok.