As Donald Trump pulls out of the Paris climate change agreement, China seizes the opportunities of Renewable Energy Technology

There’s are strict etiquette rules around gift giving in China. Traditionally it’s during Chinese New Year when one exchanges generous and often extravagant gifts. It’s not uncommon for people to get large quantities of cash, for example – usually presented in red envelopes for good luck. Choosing the wrong colour gift-wrap or giving “unlucky number” money amounts can cause serious offence. 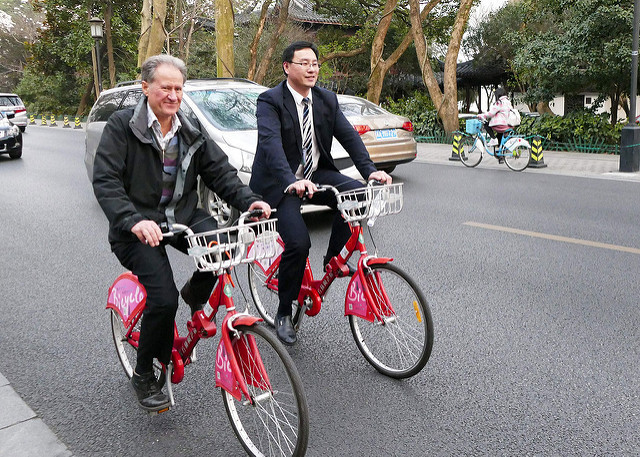 Cultural sensitivity has never been Donald Trump’s forte, however, so it’s hardly surprising he overlooked the fact that these celebrations happen in January/February (depending on the Lunar calendar). Yet considering the size of the red envelope that America just handed President Xi Jinping they’ll probably let that slide.

By pulling out of the Paris agreement, the US President has gifted China with the opportunity of a lifetime: To save the planet from climate change, while making lots and lots of money in the process. And the strangest twist of all isn’t that Trump has done this at the expense of the US economy, but the fact this bizarre turn of events might not turn out to be such bad news for the planet after all.

China might not be the hero Gotham expected, but it’s the hero it needs right now. Because the country which four years ago was burning almost as much coal as the rest of the world combined is now the country which has just overtaken Germany to become the world’s biggest producer of solar energy. If anybody can show us how to meet ultra-ambitious targets and pull off projects on a massive scale, they’re probably it.

By pulling out of the Paris climate agreement, US president Donald Trump has gifted China with the opportunity of a lifetime: to save the planet from climate change—and make lots and lots of money in the process. This bizarre turn of events might not turn out to be such bad news for the planet after all.

The fact that you need to invest in order to get a return is a cornerstone of successful business thinking—and therefore also a concept that Trump should both understand and embrace. Instead, the golden economic opportunity that green energy presents will likely be lost, or at least severely diminished, for America. In the new world order, leaders that don’t understand this will become as much of a fossil as the fuels they so stubbornly peddle.

Trump seems to build his policies on the premise that doing the right thing is diametrically opposed to economic growth. This may have been true in the very early days of green technology, where it was prohibitively expensive and relatively inefficient. But to make that same choice nowadays is a bit like refusing to buy a smartphone now because you once used a Motorola MicroTAC in the early ‘90s and it didn’t really do it for you. We’ve moved on since then.

Achieving true global-warming reduction goals requires significant commitment and investment, both of which China has in spades. And if any country can show us how to meet ultra-ambitious targets and pull off projects on a massive scale, it’d be China. Four years ago, China was burning almost as much coal as the rest of the world combined. But in 2017, it also overtook Germany to become the world’s biggest producer of solar energy. As Simon Chadwick of Salford University in Manchester explains, “China likes to be omnipotent and successful in everything it does”—and that attitude gets results.

Trump dedicated a significant chunk of his Paris-agreement-leaving speech to demonizing developing countries such as China and India for their “unfair advantage” in being allowed to burn coal to their heart’s content while spending the crippling subsidies paid for by industrialized nations. It is ironic, then, that pulling out of the Paris agreement deals such a fatal blow to the very thing his supporters trusted him to safeguard: American jobs.

The golden economic opportunity that green energy presents will likely be lost, or at least severely diminished, for America. In the US, green energy creates jobs 12 times faster than the overall economy, and these are exactly the sort of well-paying, blue-collar construction and manufacturing jobs that those voting for Trump were hoping to “get back.” The president’s decision will likely mean that green-sector jobs that could have been created in the United States may instead go to Chinese workers. Of the 8.1 million renewable-energy jobs that exist globally, 3.5 million are in China, compared to less than 1 million in the US. This latest investment by the Chinese government is expected to create a further 13 million jobs.

Evidence shows that when green-energy initiatives are well-planned and properly supported, they also do well financially Click To Tweet

There’s nothing soft and fuzzy about China’s green-energy strategy; like in everything they do, they mean business. With the cost of building large-scale solar plants dropping by as much as 40% since 2010, it makes economic sense for it to phase out coal burning and increase solar production capacity fivefold, adding another 1,000 major solar-power plants to its infrastructure. This is part of a broader program to invest $360 billion in renewable power by 2020.

Steven Han from securities firm Shenyin Wanguo says that as those costs continue to go down, China may actually exceed those targets. The country is looking on pace to over-deliver on the 2020 carbon-intensity commitments it set out in its last five-year economic plan, and all this without compromising their economic growth—quite the opposite, in fact.

Evidence shows that when green-energy initiatives are well-planned and properly supported, they also do well financially. Take, for example, the bike scheme started back in 2008 in the city of Hangzhou in southern China. In less than a decade, the number of daily hires in the city grew from 5,000 to 315,000. That’s a cumulative 774 million rides, 96% of which were entirely free. By the end of 2010 the scheme was already breaking even, with advertising revenue coming from the posters on the bikes paying not only for the running costs, but also funding expansion. The scheme, which was awarded the Ashden Award for Sustainable Travel, became a blueprint for many of the other 400 cities across China running similar initiatives.

“The Chinese economy is already transitioning from a reliance on manufacturing to prioritizing innovation. This timing means that China can seize opportunities available in spaces like green technology,” says Samantha Deave, corporate services manager at Asia House, an independent center for commercial policy expertise based in London.

A report by the Institute for Energy Economics and Financial Analysis (IEEFA) found that China is cementing its dominance in renewables, rapidly accelerating its foreign investment in renewable energy, and supporting technologies. In 2016, there was a 60% rise in large-scale (over $1 billion) Chinese foreign investments in the sector for a combined total of $32 billion. These projects were spread across the globe and included buying power from wind and solar farms in Australia, spending $1.6 billion on a waste-to-energy development in Germany, and buying a 25% stake (worth $2.5 billion) in a Chilean lithium miner and processor, which will ensure supply of the lithium essential for electric-car batteries, for example. Tim Buckley, director of energy-finance studies at the IEEFA, says US isolationism provides China with the perfect opportunity to establish a long-term political, economic, and strategic leadership globally.