We talk to the first developers to join Microsoft’s HoloLens partner program about what the future of Mixed Reality looks like.

Object Theory are pretty much the oldest Mixed Reality company around, having launched in June 2015, before the HoloLens had even started shipping. In many ways they’re your typical tech company – my demos are delivered in the familiar blueprint of a trendy open-plan office with exposed brick walls, which sits above a sushi restaurant – but it’s got a different vibe from a lot of similar start-ups.

For starters, they’re based in Oregon as opposed to Silicon Valley. And while Portland is by no means a backwater, it’s still not a major tech or immersive content hub like LA or San Francisco either. For another, its founders Raven Zachary and Michael Hoffman (who left Microsoft to start the company) operate a very profitable business (employing about a dozen people between full timers and contractors) with no investment capital. In spite of the fact we’re joking around and playing Angry Birds on Magic Leap, the whole thing feels very grown up, in the sense that these guys are in this for the long haul, and so, they reckon, is the business of making Mixed Reality.

You haven’t really experienced how much fun @AngryBirds is until you tried it in #mixedreality. Thanks @ObjectTheory for letting me play with your @magicleap! pic.twitter.com/UMhQbxgH1g

A key enabler for Object Theory’s success has been Microsoft’s strategy for marketing, supporting, and developing Mixed Reality content for the HoloLens, which is why Zachary and Hoffman are enthusiastic in their praise for the company, and in particular of the leadership of CEO Satya Nadella. By pivoting towards the enterprise market early on, Microsoft managed to create strong and sustained demand for Mixed Reality tools among companies looking to solve real business needs. That, in turn, allowed their partner developers to secure key contracts as they figured their way around the new technology.

“It’s curious how the HoloLens originated with the Xbox team (its inventor Alex Kipman was also responsible for the Kinect) so there was this idea that it would be mainly a consumer product,” recalls Hoffman. “It was really interesting to see them pivot in that way and go mainstream towards enterprise and I think it was absolutely the right move for them to make.”

The other significant pivot Microsoft made in recent years, adds Zachary, was to move away from being hardware-centered to focusing on the cloud, marketing Azure’s ability to enable what they call ‘The Intelligent Edge’: “Microsoft is the only one of the large players that has actively decided to be a multi-platform company. They are actively embracing everything that’s relevant out there, and that makes sense, because they’re making cloud consumption more valuable if it works with everything that’s out there. Because of that we hope – and it would make sense – if they adopt an OEM for their Mixed Reality technology. Microsoft has this great patent portfolio and it would be great to take that amazing secret sauce of the HoloLens and license it out to their existing OEM partners like Dell or Samsung.”

Object Theory are the oldest Mixed Reality company around, having launched in June 2015, before the HoloLens had even started shipping Click To Tweet

Since the launch of Magic Leap One earlier this year, Object Theory has also started exploring the possibilities that the other platform brings, such as better eye tracking and support for finer and more nuanced gestural controls as well as the much-talked-about additional field of view:

“People tend to focus on the extra field of view, but part of it is just an illusion, because they just don’t let you see what is not there, it’s really a trick because the edges of your vision are restricted by the design of the Magic Leap One HMD,” explains Hoffman. “With that restriction, you never get that cognitive dissonance of having an open FOV and a restrained one at the same time, which is what you get with the HoloLens. But that said, everyone says that after a day or so of using the HoloLens your brain adapts to it and you just don’t notice it any more, so for me this is really not a major issue.”

They muse that Magic Leap probably waited too long to launch, so that by the time they did, people were both less awed by the technology, and had unrealistic expectations fuelled by the company’s infamous cinematic concept videos.

“We in the industry knew that’s what we were going to get, but consumers felt let down because they didn’t realize the whale jumping in the school auditorium was a concept video, so for us the troll throwing a boulder was fine, but consumers – who weren’t going to buy the device anyway – felt let down,” says Zachary.

If we do get a sneak peek at the HoloLens 2.0 in Barcelona on the 24th, it will be over three years after it was first launched, so developers like Object Theory are keen to see an acceleration of that innovation cycle. Zachary and Hoffman believe that bringing competition is one way to achieve this, and that, in a way is where the real value of having Magic Leap enter the arena lies.

People tend to focus on the extra field of view for Magic Leap, but part of it is an illusion, because they just don’t let you see what is not there, it’s restricted by the design of the HMD Click To Tweet

Although they haven’t deployed on Magic Leap yet, they’re hopeful that because every platform out there is investing in enabling Unity compatibility which enables them to develop cross-platform more easily. The challenge going forward, they anticipate, is that major tech companies are very used to owning their developer ecosystems outright,

“The challenge for Microsoft, Apple and Google is that they’re used to owning their developer ecosystems outright,” says Zachary, “so this is the sort of abstraction that I’m not particularly sure Apple and Google will buy into – but Microsoft might because they care about the cloud more than control over the developer ecosystem. I think ultimately for us, when an enterprise customer asks us if we can deploy on Magic Leap – which hasn’t happened so far – we’re ready and open to having that conversation. We’ve been saying all along we want more players, more competition. The more success we have in making this solve real challenges or even desires such as entertainment, the more it becomes meaningful, the pie gets bigger and there’s more opportunities for companies like us.”

The main question they’re asking themselves now is whether CIOs at Fortune 100 companies will want to invest in a start-up’s hardware solution or whether they’re by default going to go with a major player such as Apple or Microsoft.

“I don’t know the answer to that, we’re still leading with the HoloLens, it’s still our platform of choice, but we don’t know where that market is, Zachary says, but Hoffman goes a bit further, outlining how Microsoft’s targeting of enterprise proved to be a genius move in rallying developers like them to the platform in spite of its relatively small install base.”

“No matter how much money the investment in Magic Leap sounds, it’s still small compared to a company like Microsoft. They are a start-up,” says Hoffman, “And if I’m an enterprise I definitely want to take the Microsoft solution because even if they’re not perfect, they’ve been solving my business needs for a very long time,” he says, adding that while Microsoft might not be perfect, they’ve become very good at providing the services their enterprise customers want, and it was unlikely those customers would look elsewhere for them. In other words, Microsoft really isn’t going anywhere, where even a very well-funded start-up like Magic Leap could eventually run out of money and disappear without a trace. Given how risk-adverse large corporations tend to be, it’s clear what an advantage Microsoft has here in continuing to develop that market.

Even after three years, a lot of the R&D behind the HoloLens still stands up well, such as the fact that the HMD allows users to wear their prescription glasses is a huge plus (Magic Leap’s design requires you to order and purchase a special insert for around $200) as is heat dissipation; “Magic Leap makes me sweat within minutes of putting it on,” Zachary says. Another feature where the HoloLens technology scores highly with the developer community is spatial audio, which is something that Microsoft invested heavily in getting just right.

“What I love about the spatial audio feature as a developer is that you literally just have to push a button and it works. The Algorithms fill in all the blanks for you,” Zachary enthuses. “The sense of presence with Prism (the Mixed Reality collaboration and productivity platform that Object Theory developed for the HoloLens) because of the spatial audio is amazing. I want to talk to the silly cartoon avatar because the sound makes it really feel like that person is in the room with me, it’s unbelievable.” 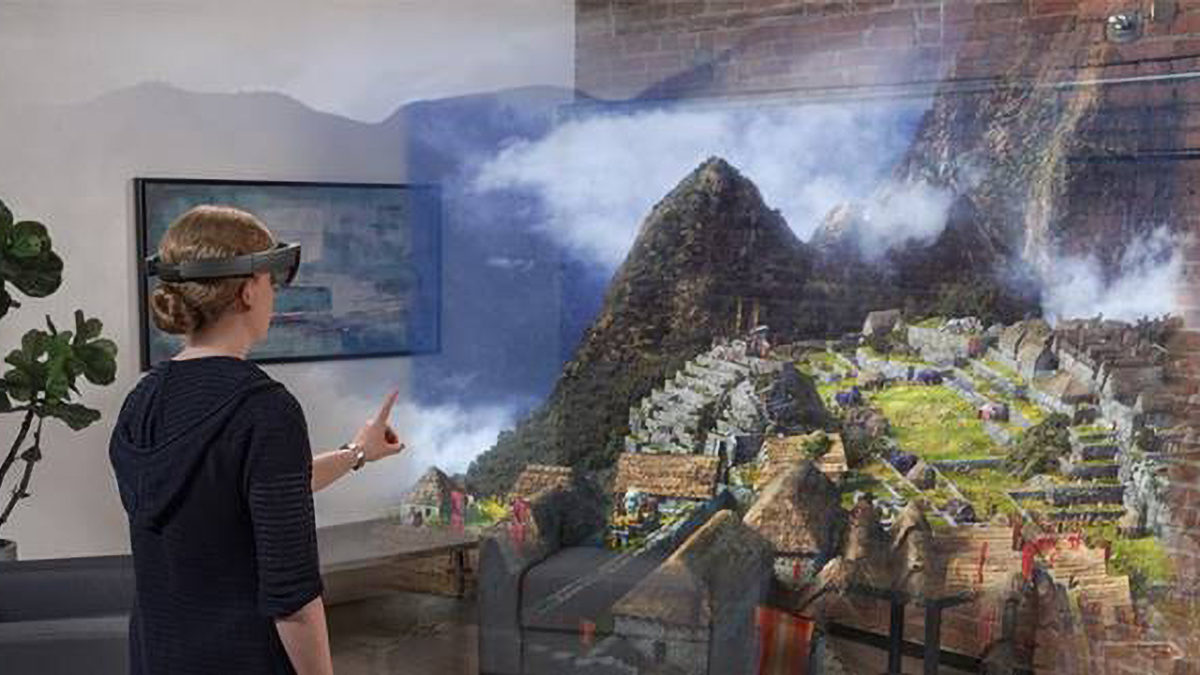 “So overall – and we asked a lot of other people about this too – the sense is that Magic Leap outperforms the HoloLens in a couple of areas, and does worse in others, but there isn’t this sense that the needle has been moved dramatically,” Hoffman adds. “We’re very curious to see how they position Mixed Reality in 2019 and to what extent HoloLens will be a core or ancillary part of that story, and whether we’re going to see OEM devices. The more partners out there building devices, the more this market is going to move forward. We were a bit early, but we’re true believers.”

Between Magic Leap and HoloLens, which is going to win over developers?https://t.co/X6QOjv8BGe pic.twitter.com/R5EyHZQLby