Virtual, augmented and mixed reality are changing everything from training to marketing and storytelling.

By Daniel Fraga, VR/AR Designer at Somewhere Else innovation agency

You don’t only think with your mind. Your notebook is part of your thinking. So is your pen, your smartphone - your whole environment. That’s why Immersive Tech is a powder keg, waiting for a spark Click To Tweet

The Extended Mind Hypothesis – first proposed in 1998 by Andy Clark and David Chalmers – is the idea that objects within the environment function as part of the mind. Take “Otto” and “Inga” for example. They are both travelling to a museum simultaneously. Otto has Alzheimer’s and has written the directions to the museum on his notebook. On the other side, Inga relies on the memory of previous trips to find her way.

From a functional perspective, Otto’s notebook has the same role as Inga’s memory – although one is a physical object and the other a mental property. Otto’s mind has been extended to include the notebook as the source of his own memory. This idea – that our environments are part of our “minds”, resonates with the ideas of Robert Pepperell. In the Post-Human Manifesto , he says that “Human bodies have no boundaries” , and that “Consciousness (mind) and the environment (reality) cannot be separated; they are continuous” .

So in the same way that Otto’s notebook is part of his extended mind, is a smartphone an intimate part of ours. The same can be said of our shoes and clothes. They are extensions of our skin that protect us from heat and cold.

It’s of no surprise to anyone that technology is becoming a vital part of our selves. In fact, as humans, we have always been naturally intimate with technology. Think of fire, the wheel or even speech itself. These “technologies” have been there since the beginning of the human journey.

Today we’re approaching a critical moment, and fast. According to this survey , the average Brit checks their smartphone over 10,000 times per year. According to the UK Office for National Statistics, virtually all of all adults (99%) aged 16 to 34 years used the internet recently . Today, it is clear that new technologies are a fundamental part of our extended minds and influence the way we work. With the advent of virtual, augmented and mixed reality technologies – this will increasingly be the case.

This leads us to a big question: What if immersive tech could also help influence your way of thinking? 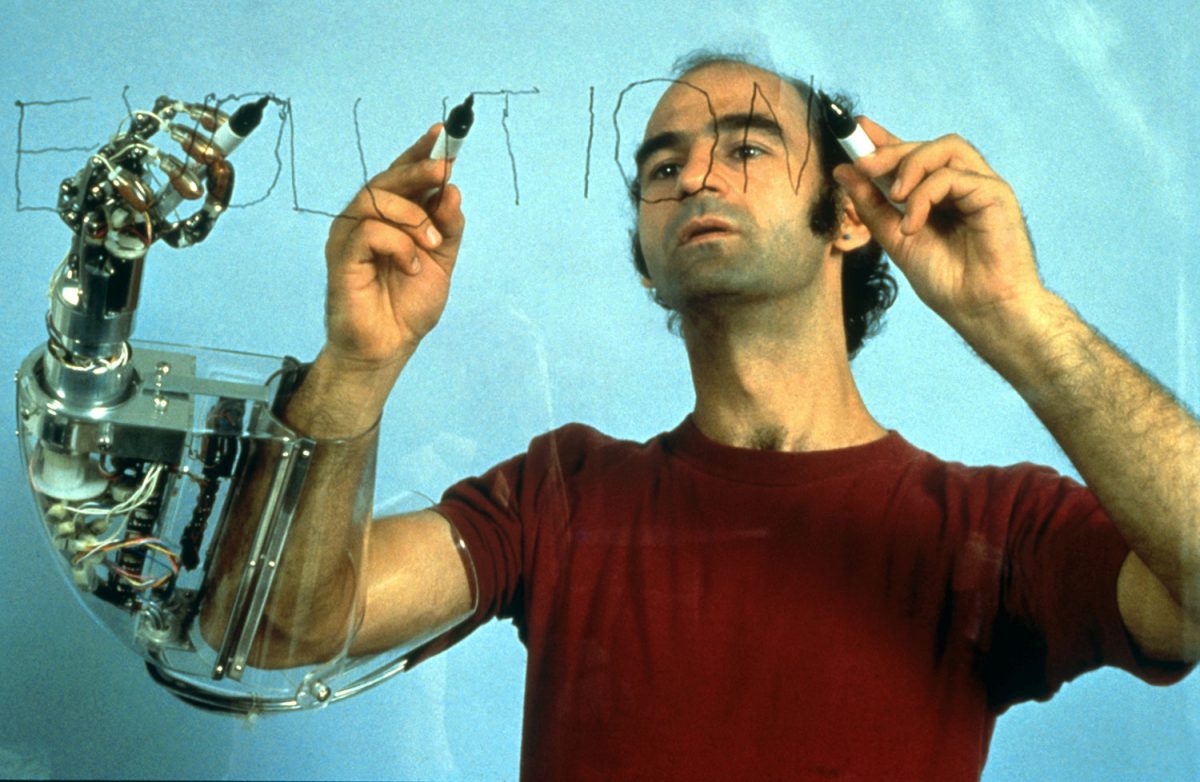 The world we see is quickly becoming an intelligent information display. Interfaces and information displays are multiplying, and immersive technology will only intensify this trend. For example, ZARA is augmenting the shopper experience by helping customers visualize the clothes they’re browsing by putting them on a digital model. Even IKEA is using AR to let people test their furniture in their own homes. 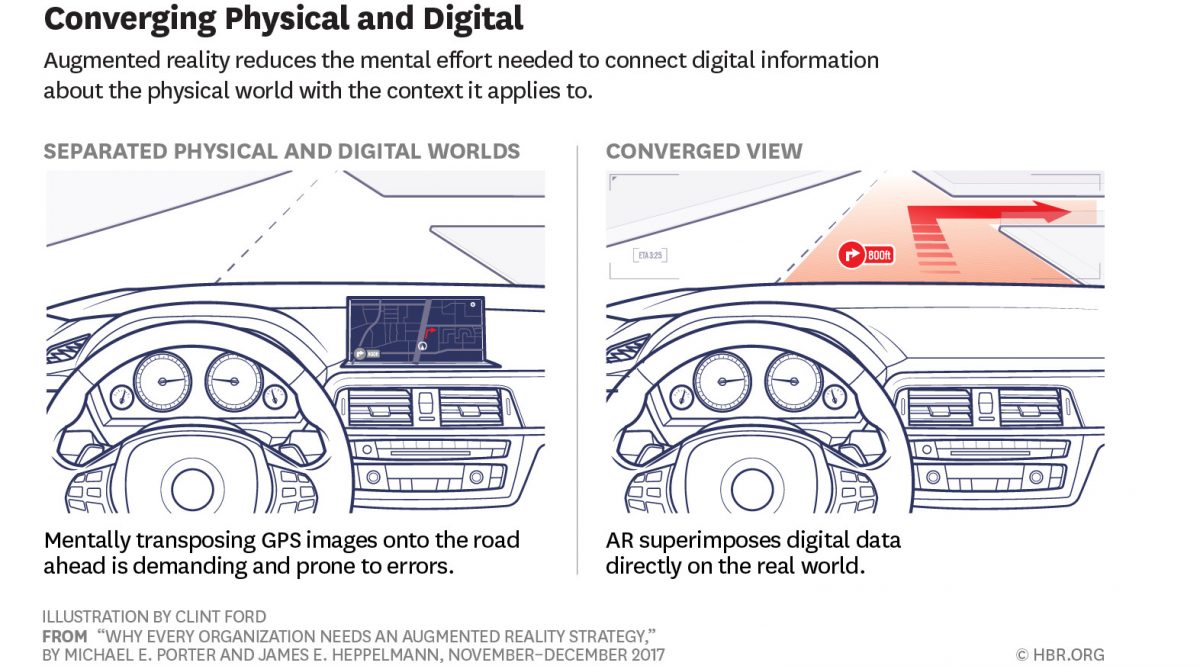 The bottom line is that reality is becoming mixed . The lines between “real” and “virtual” are inching closer and closer together. More importantly, one major consequence is that our minds will extend onto the visible world. We can do what Otto did with his notebook using Immersive Technologies.

PSA Peugeot Citroen have been developing tools to superimpose directions directly on roads to help drivers. In theory, Mixed Reality (MR) lets the user see the real world with realistic virtual objects. It anchors those virtual objects to a point in space, making it possible to interact with them as if they were real. At least from the perspective of the user. 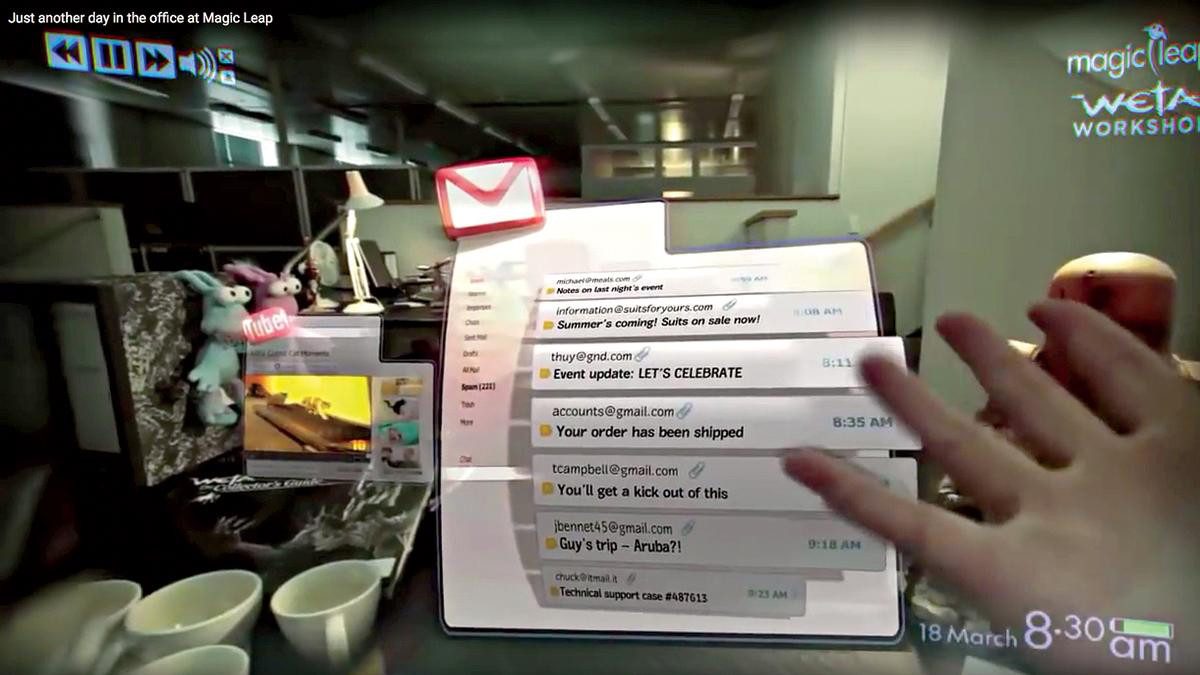 ” The ultimate computer, for me, is this mixed-reality computer, where your field of view becomes an infinite display, where you see the world. And you see virtual objects and holograms. That’s definitely what we are building today with HoloLens” , says Satya Nadella, CEO of Microsoft.

We are in the middle of a technological transformation. In our near future, our digital lives will center on devices that look like common eyeglasses, but that weave together “virtual” and “real”. An extended field of mind – made possible through a very intimate technology. In a curious way, Immersive Tech can even be said to be Psychedelic . This word is based on the Ancient Greek words psychē (ψυχή, “soul”) and dēloun (δηλοῦν, “to make visible, to reveal”). It translates to “soul-revealing” ; it makes the content of our minds visible, as it pours into our spaces.

Immersive Tech invites us to use “space” around us as a medium to interact with technology. The advent of technology like Magic Leap – a game changing mixed reality headset – will trigger a new way of looking at space and content, because we are designing the spaces with which you think: spatial computers .

Maybe in the future we will use Immersive Tech in the same way Otto uses his notebook or Inga uses her memory. As a natural extension of our being – an extension which reveals our worlds back to us in a new way. We will spend our days, weeks and months immersed in curated worlds – with their own rules, contexts, dynamics and interfaces.