An exceptional institution in Hawai is leading the way in how we prepare students to become leaders in a rapidly changing 21st-century workforce.

By Paul Turnbull, President of the Mid-Pacific Institute

While some experts believe Artificial Intelligence and machine learning will ultimately improve our lives, others have declared that AI presents an existential threat to humanity. However, most opinion leaders agree on one thing: Worldwide, Artificial Intelligence has the potential to replace hundreds of millions of jobs by 2030.

In disruptive times like these, many schools face a difficult conundrum: Prepare students to become leaders in a rapidly changing 21st-century workforce, while using insufficient 20th-century methods that reflect lagging resources.

As the President of Mid-Pacific Institute, a PS-12 school in Hawaii, I am both champion and cheerleader for the current generation of students who will lead beyond the fourth industrial revolution and the imagination economy. I believe students can grasp the complexities of our disruptive society if they are given the opportunity, as long as they are simultaneously surrounded by a supportive environment that emphasizes the importance of human relationships and empathic problem-solving. 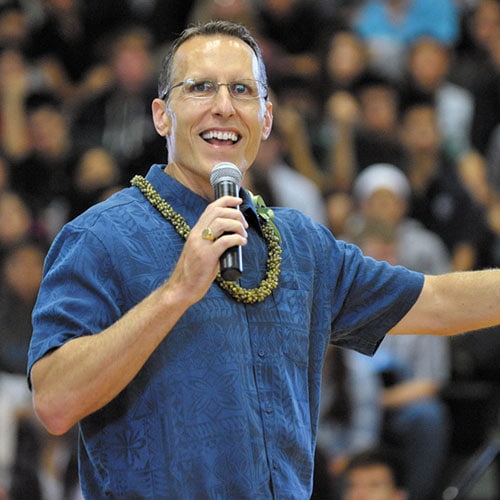 The innovative school community at Mid-Pacific also believes in the power of the next generation, which is why we decided to take an iconoclastic and future-oriented position regarding technology. In order to prepare students for leadership in the imagination economy, our first step was to upend our philosophy of technology in education.

We began with a simple objective: to move students away from content consumption and toward content creation. At the same time, Mid-Pacific adopted a deeply philosophical approach to tools and learning, asking, “How can technology amplify the human experience rather than drive it?”

This approach led to the development of two ground-breaking programs: Our Technology Vision and the Immersive Technology Program (the first of its kind in the United States).

The Mid-Pacific Technology Vision is reflective of the skills and abilities students would need over the next 20 years and more … not just to become productive members of society, but also to be fully actualized human beings. Today, it is assumed that all Mid-Pacific students – no matter their areas of academic, artistic, and athletic interest – will graduate as Computational Thinkers, Engineers, and most importantly –  Digital Storytellers.

As computational thinkers, Mid-Pacific students are computer programming language “agnostic” and possess the ability to quickly learn new languages because they can think programmatically. As engineers, they learn how to use design thinking and similar methodologies to solve real-world problems. As a result, Mid-Pacific students understand the global impact and economic feasibility of their work, and they are inspired to effectively communicate their knowledge to others.

These skills, in combination with the ability to tell compelling stories across digital platforms, place students at the forefront of the imagination economy. By anticipating an ever-evolving tech landscape and emphasizing an integrated approach to the creative process, Mid-Pacific created curricula reaching all the way into the youngest grade levels based on the belief that technology ought not to be a discrete field of learning unto itself; instead, it was decided that different forms of tech should be ubiquitous, as they became available, across campus and across academic disciplines.

The ultimate result of our work led to the creation of the Immersive Technology Program at Mid-Pacific, placing amazing tools into the hands of students and giving them the creative license to tell awe-inspiring stories using 3D digital platforms such as VR, 360-degree video, and LiDAR.

While the Immersive Technology Program featured insanely great tools, the real focus was on the human component: Digital Storytelling. We believe that people build narratives to persuade, entertain, and enlighten. As a result, Mid-Pacific digital storytellers go beyond traditional digital media, leveraging increasingly sophisticated platforms such as computer simulations, game engines, and interactive wearable technology. The result? The use of tech is ubiquitous in Mid-Pacific’s curricular and extracurricular program, and the result is a seamless comingling of art and science.

The Immersive Technology program at Mid-Pacific places industry-grade technologies such as 3D LiDAR scanning and 360-degree video directly into the hands of students. Why? Because the ability to capture, compute, and contextualize objects as small as an extinct beetle and as large as a WWII-era internment camp gives students a new perspective on academic subject material even as these same students practice critical tech skills.

Immersive Technology also offers courses in Animation and Game Design for Virtual Reality. Students with skills and ownership over their own learning in this new arena create compelling immersive digital content in the Humanities, Creative Arts, and Sciences – heralding an important cross-pollination between multiple disciplines and multiple industries.

Students with skills and ownership over their own learning in this new arena create compelling immersive digital content in the Humanities, Creative Arts, and Sciences Click To Tweet

What does cross-pollination look like at Mid-Pacific? Sometimes it is a student working with a professional game designer to integrate motion capture into a VR game engine. Using motion capture suits, students have the ability to translate their actions directly into virtual environments, effectively bringing their stories to life.

Other times, cross-pollination takes the form of students who engage in inter-departmental collaborations. For example, imagine watching a beautiful dance performance that spans the subways and the streets of New York. The performance tells the story of a student’s desire to dance professionally, without the boundaries of traditional studios and theaters. At Mid-Pacific, that story is made possible through the work of a student who is able to pursue advanced certification in dance and technology.

The performance tells the story of a student’s desire to dance professionally, without the boundaries of traditional studios and theaters Click To Tweet A student who wants to explore the intersection of arts and technology has the freedom and the expertise to pursue her dreams Click To Tweet

By working with expert faculty and gifted student peers, a student who wants to explore the intersection of arts and technology has the freedom and the expertise to pursue her dreams. She is able to choreograph dances that account for 6-degrees of freedom within VR and she is able to create the virtual environments meant to engage viewers on an emotional level.


Using motion capture suits, students can translate their actions directly into virtual environments, effectively bringing their stories to life Click To Tweet By putting advanced technology into students’ hands, today’s educators can help the future employees and entrepreneurs of the imagination economy create and thrive in a future of their own creation. Click To Tweet

These are the stories of future leadership in the imagination economy. They were able to begin on a school campus because the Mid-Pacific community put students first and because we asked that simple question that turned the fourth industrial revolution upside-down: “How can technology amplify the human experience rather than drive it?”

New technologies emerge with increasing regularity, and current ones will be used in ways we can’t yet imagine. From digital entertainment to academic studies, 3D game environments to human empathy, potential abounds. By putting advanced technology into students’ hands, offering research-based guidance and instruction, placing human relationship at the core of the student experience, and encouraging learners to take ownership of their learning, today’s educators can help the future employees and entrepreneurs of the imagination economy create and thrive in a future of their own creation.

Paul Turnbull is President of the Mid-Pacific Institute a PK-12 college prep school on the glorious island of Honolulu, Hawai. Follow him on Twitter @MPIPresident