Awbie is a strawberry-loving, super-cute monster that teaches your kids how to code. I met him at the Global Education and Skills Forum (GESF) in Dubai, and lost track of time as I got caught up into playing the Osmo Coding game, which was developed as a partnership between Northwestern University’s TIDAL Lab and Tangible Play.

This seamlessly blends the physical and digital world through a very simple and satisfyingly tactile interface where you combine colourful modular puzzle pieces, turn levers and press various buttons to direct the actions of Awbie on a tablet in his endless quest for more strawberries. 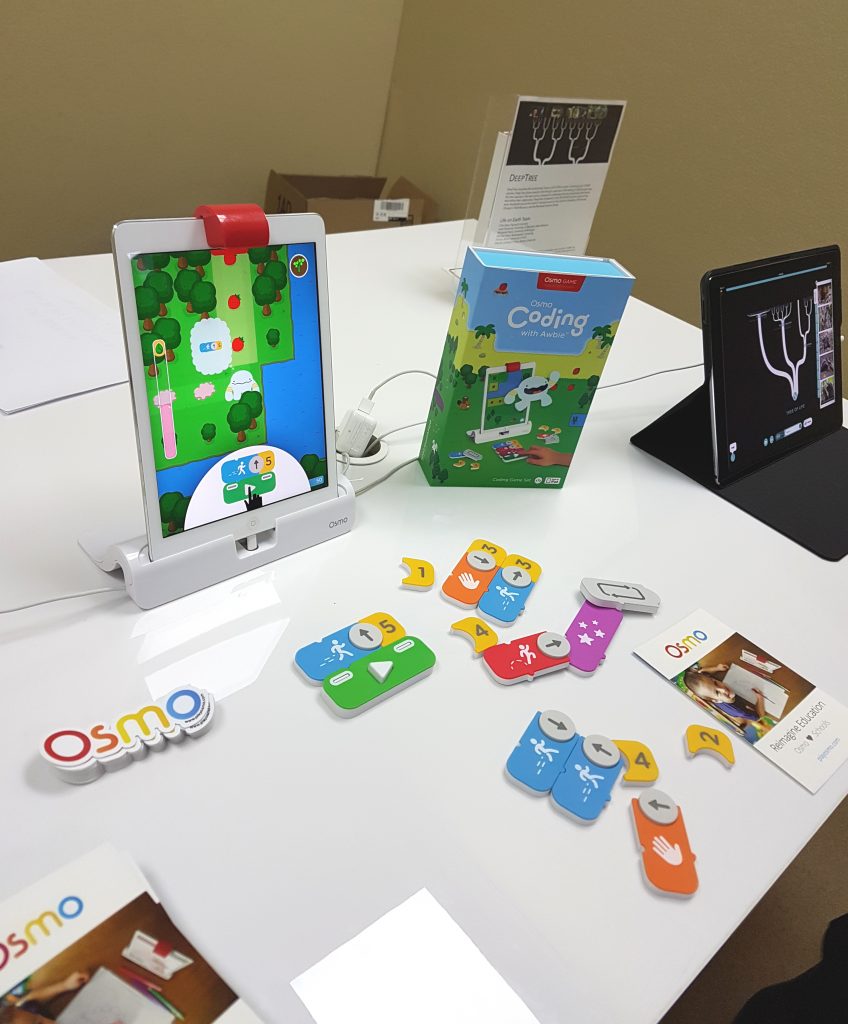 But as adorable as Awbie was, I was curious to see the other offerings from the Northwestern University booth at FutureZone, an area dedicated to cutting-edge EdTech at GESF.

I had heard of the recent collaborative programming exhibit they had made for Silicon Valley’s Computer History Museum called Frog Pond, and was able to demo the smaller “travel” version of it. Like Osmo, it is visually rich and vibrant, and the interface is very smooth. More importantly, however, there is no learning curve. It only takes a few seconds to figure out how it works, which is basically teaching the principle of giving a computer sequential instructions. A lot of people get very intimidated seeing vast incomprehensible lines of code and never move beyond that, but once you get your head around that cornerstone of coding logic (holy Eureka, Batman!) it literally all starts to click into place. 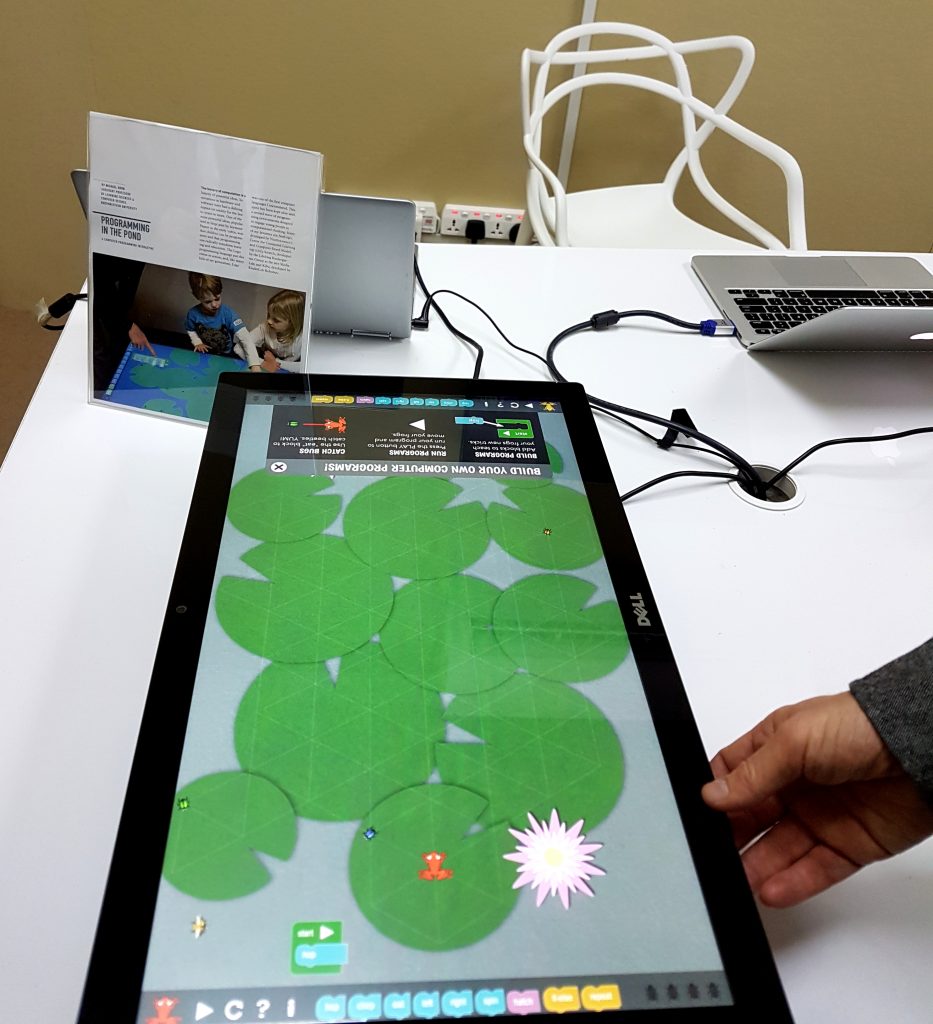 The highlight of the show for me, however, was Deep Tree. This based on Darwin’s original ‘tree of life’ drawing, and is made up of over 70,000 species that visitors can explore using a deep zoom interaction interface which feels much like Google Earth’s interface. Children (and grownups) can literally fly through the vast tree to find out more about any species, and their origins, all the way to 3.5 billion years ago and back to the present day. They can also see how any two species are related, no matter how far-fetched that combination might seem. At which point in the evolution process did frogs and birds go their separate ways, and what was their common ancestor? The tree tells you in an instant. Dr Michael Horn, who led the project at Northwestern University, tells me that visitors get really into trying to find the most unusual combination of species they can possibly think of. 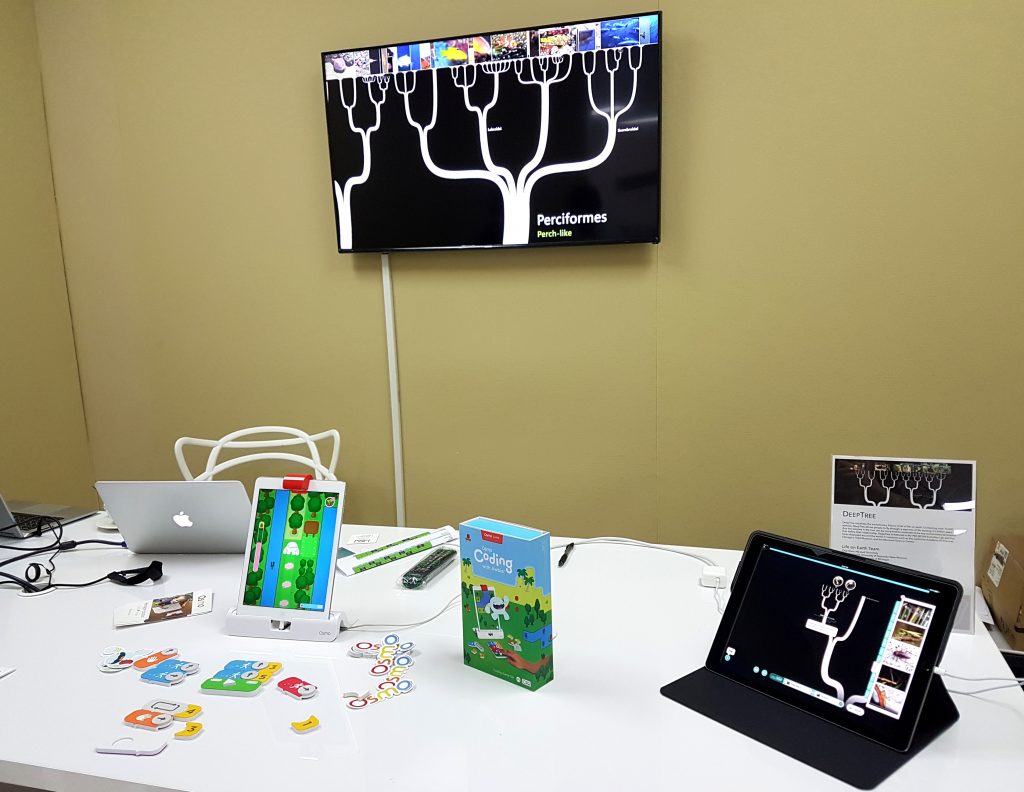 The researchers also developed a companion game called Build-a-Tree which teaches children through game play about relationships between different groups of organisms as well as the traits that help define those relationships. Kids can build their own evolutionary tree and compare it to the scientist’s version. The tech had so far only been piloted in museums, so this was its first international public demo.

A research study showed this interactive tech to have tangible learning benefits. The study, conducted at two natural history museums where visitors collaboratively explored the tree of involved 247 children aged 8–15 years, randomly assigned in pairs to one of four conditions. In two of the conditions, pairs of youth interacted with different versions of the tree of life table top exhibit for a fixed duration of 10minutes. In a third condition, pairs watched a 10minute video on a similar topic. Individual responses on a 53-item exit interview were then compared to responses from a fourth, baseline condition. Contrasting with the baseline condition, visitors who interacted with the table top exhibits were significantly more likely to reason correctly about core evolutionary concepts, particularly common descent and shared ancestry. You can watch Tree of Life in action below.

DeepTree Exhibit at CalAcademy from Michael Horn on Vimeo.