Is this the miracle VR has been waiting for? Tech Trends checked out the world’s first feature length immersive film at its London premiere.

7 Miracles – the first feature-length cinematic VR film premiered at the 26th Raindance Film Festival in London, which is Europe’s leading independent Film Festival and the largest in the UK. It was created using photogrammetry and volumetric video capture, producing images in 8K with additional scenes built in 3D.

The whole film is just over 70 minutes long, divided into 10-minute chapters, each depicting one of Jesus Christ’s famous miracles from the Gospel of John. The chapters can all be watched sequentially, or episodically in whatever order the viewer wishes to go, and that flexibility helped to bridge the gap between the current dominant form of short-form VR content and the longer pieces that they wanted to explore. They opted to making 7 Miracles a seated experience because people’s seated height is much more similar than their standing one, so by placing the action above you as it would be on a movie screen, it felt just as comfortable and familiar as going to the cinema. 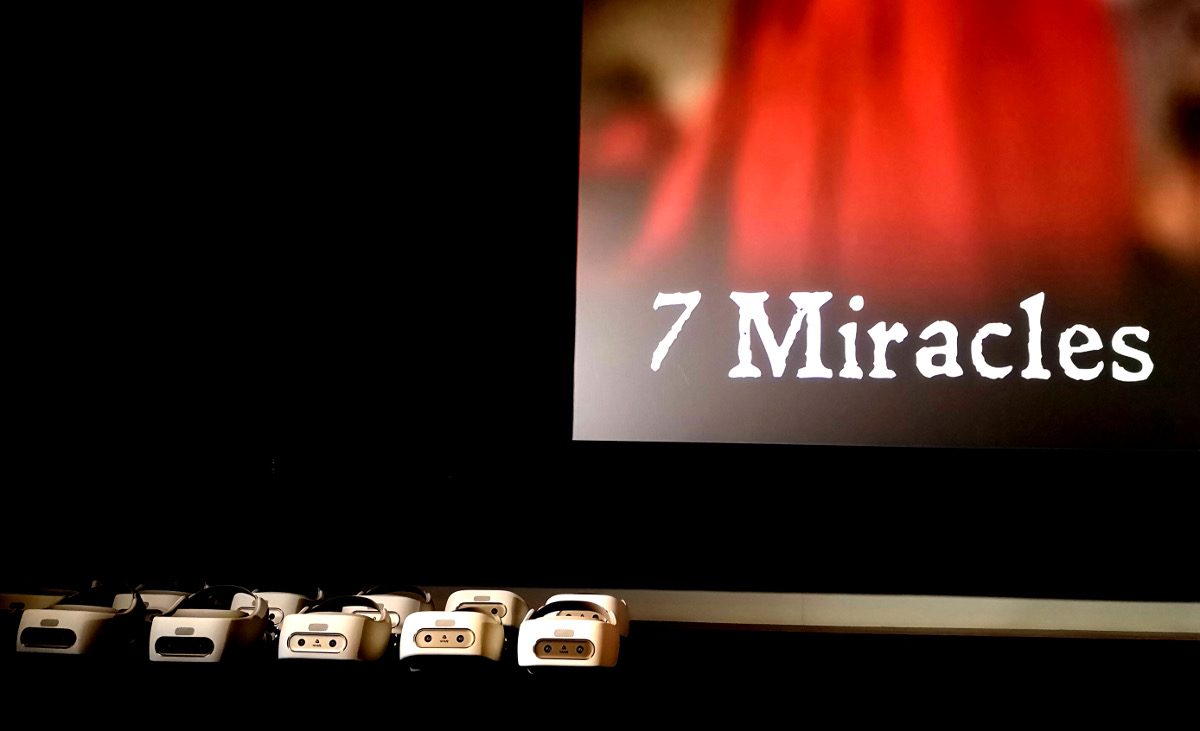 I got the chance to view 3 chapters at a special preview on one of the new VIVE Focus headsets which Joel Breton – VP of Vive Studios and Executive Producer on the film – calls the Ferrari of all-in-one VR. It was a good opportunity to try it out, since they are not due to hit the UK/US markets yet (there are hints that we might be looking at a release around this holiday season, but no official date yet). It had simple yet effective controls that allowed for quick adjustment to tighten or loosen the fit around your head and to match the distance between your eyes – which varies quite a lot from person to person – and calibration of the inside-out sensors. The other feature that I found quite nifty is that at the push of a button you can access the external camera image, saving you constantly lifting up the headset from your eyes, which tends to interrupt the content playing.

Breton told me afterwards that it was interesting for him to see a completely silent theatre full of people immersed in the same experience (you don’t need headphones with the VIVE Focus headsets but as we were relatively close to each other, we wore ear buds so as not to interfere with one another’s experience).

“All-in-one VR is probably what I’m most excited about – getting rid of wires but still being able to have a very rich and colourful experience is certainly the future,” he added.

But in order for people to want to buy those headsets, everyone recognises that there must be compelling content available that they want to experience, which is where VIVE Studios comes in. This is Breton’s project and he’s driving its mission of expanding the content ecosystem and pushing the envelope of what can be achieved through immersive storytelling.

“The main thing that makes VR storytelling so exciting, is that instead of projecting the action in a screen in front of you it puts you right in the middle of the action – You become the hero,” said Breton.

At the discussion after the screening, the cast and crew were asked why they thought now was the right time to try longer-form content for VR. These are all creative and entertainment industry veterans, and it was clear that they are enthused about the potential of VR to create new types of narratives and stories. They’ve been working on 7 miracles for about 2 years, and hearing them talk about it, it’s clear that a lot of effort and work – as well as significant investment in terms of money and technical resources – has been poured into the project. 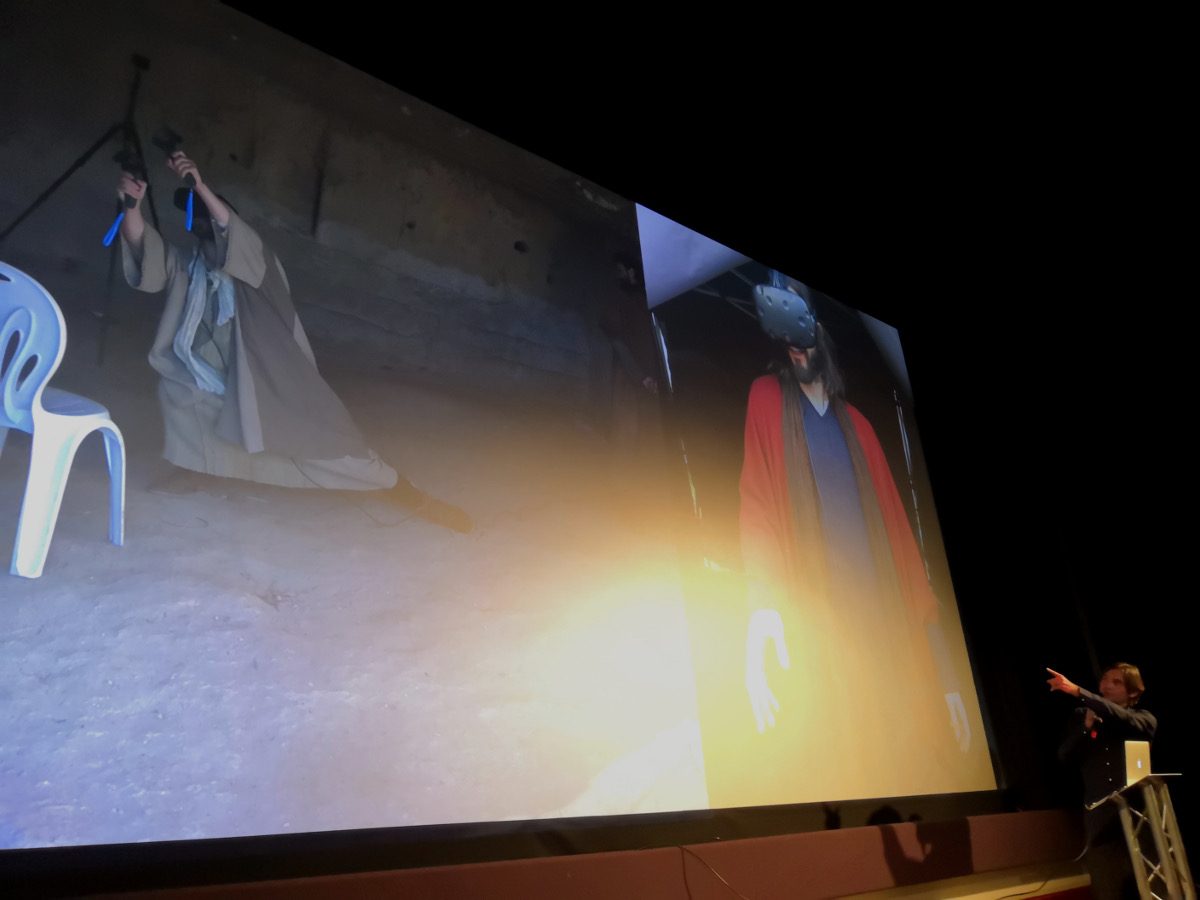 Breton started his career at SEGA Genesis. He developed and published over 250 videogames over the years and although he says he’s stopped counting them years ago, they do include iconic titles like Sonic the Hedgehog, Donkey Kong, Quake and Doom.

Executive Producer Enzo Sisti worked on more than 100 movies including Wonder Woman, Avengers: Age of Ultron and (appropriately) Passion of the Christ. He says he was initially very skeptical, but much like the non-believers in the film, he was converted.

“This is very exciting and I think this is the future. After 50 years in the business in I’m excited about starting a new career,” he said.

In spite of the myriad challenges, Director Rodrigo Cerqueira believes the technology – such as six degrees of freedom – and production values have moved far enough along so that we’re able to push the envelope much further than it has been pushed so far. 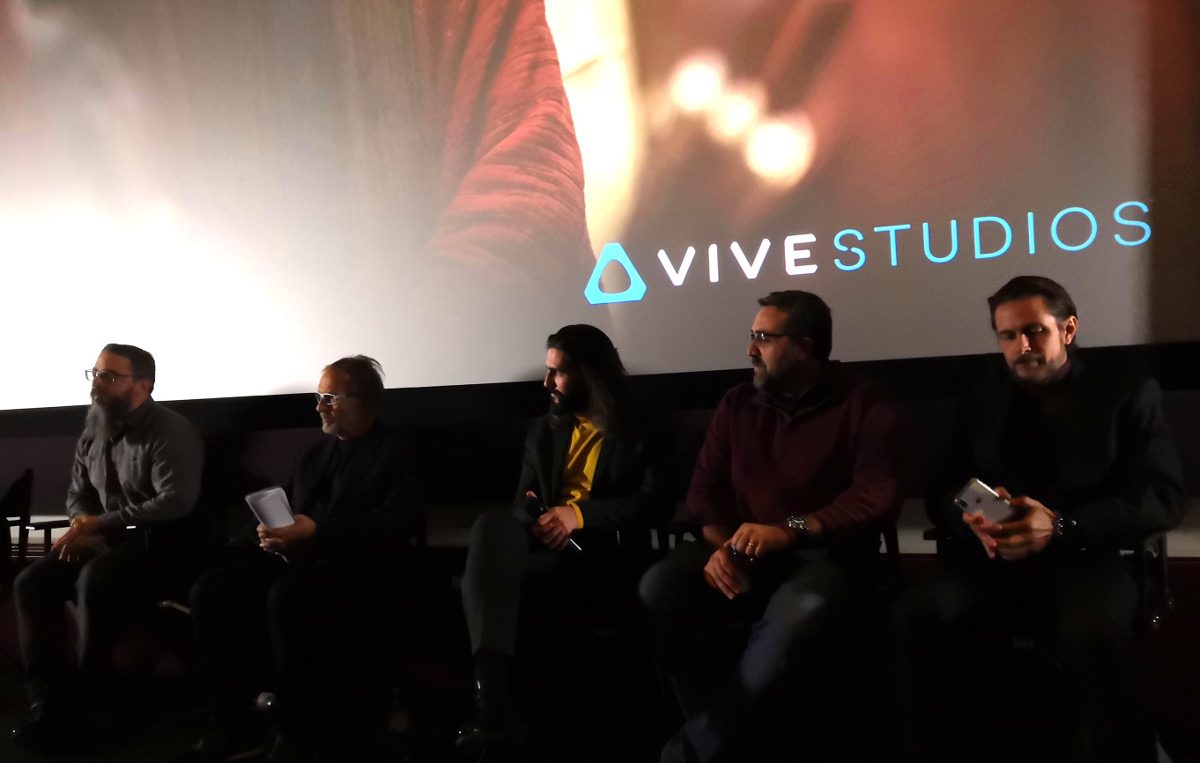 Cerqueira recalled how his company Panogramma had produced hundreds of short pieces between 2010 and 2015, but when they were asked to do a one-hour experience for the World Cup, it opened his eyes about the possibilities of longer-form content.

“As filmmakers we have the responsibility to push those boundaries, and others will follow in our footsteps and push it even further, and that’s how we advance the medium. That learning curve is so important and it’s also important that there is a learning curve. If you look at film they also started with short format and when they first started making them longer, most people thought that was crazy,” he says.

In many ways the production went along similar lines to a regular indie film. Sisti said they had between 80 and 100 people working on the shoot, which took around 15 days. Post production took over 10 months, which is certainly a lot, but again, many CG-heavy productions would demand similar resources. Where the VR production proved to be more labour (and time) intensive, however, was in the planning phase, where Cerqueira spent over 4 months planning the workflow.

I was Jesus for ten minutes, and it was a hell of an experience! Click To Tweet 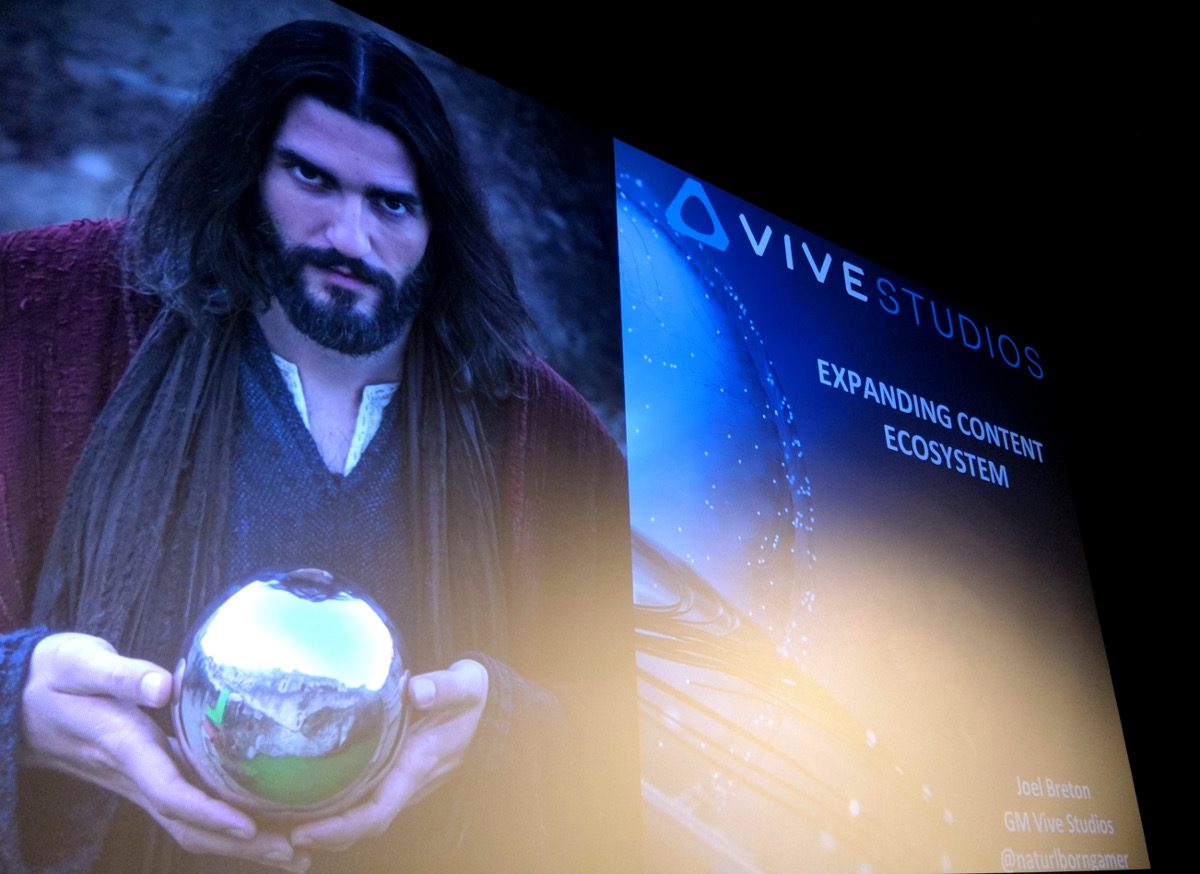 It is often the case in the creative industries that technical limitations lead to choices that shape the  direction of the medium. One example of how this happened in VR productions is the fact that using a 9-lens 360 camera rig means that all directions are filmed simultaneously, so there is no “behind the camera” where the crew can stand during shooting. They either had to be disguised as extras or find somewhere to hide (we were shown some funny shots of sound engineers lurking behind bushes next to a camel).

Dejan Bucin, who plays Jesus in the film, says that from an actor’s perspective it often felt much closer to playing theatre than doing a film, and that meant he could get really immersed into the role himself:

“I was Jesus for ten minutes, and it was a hell of an experience!” he laughs. “You can exaggerate and project. You forget about the audience, because you really get into those interactions. In a regular film you always see this amazing setup, all the crew, equipment, etc. But in VR, that all disappears.”

And kudos to them for not only tackling the challenges of producing feature-length VR, but also choosing to do so with a Biblical story, which comes with such baggage, so to speak.

For one, there’s the fact that as a Brit you definitely can’t get Monty Python’s Life of Brian references out of your head when watching any film about Jesus. Everybody knows that the only retort that logically follows anybody declaring themselves to be the Messiah is that he is in fact a very naughty boy… 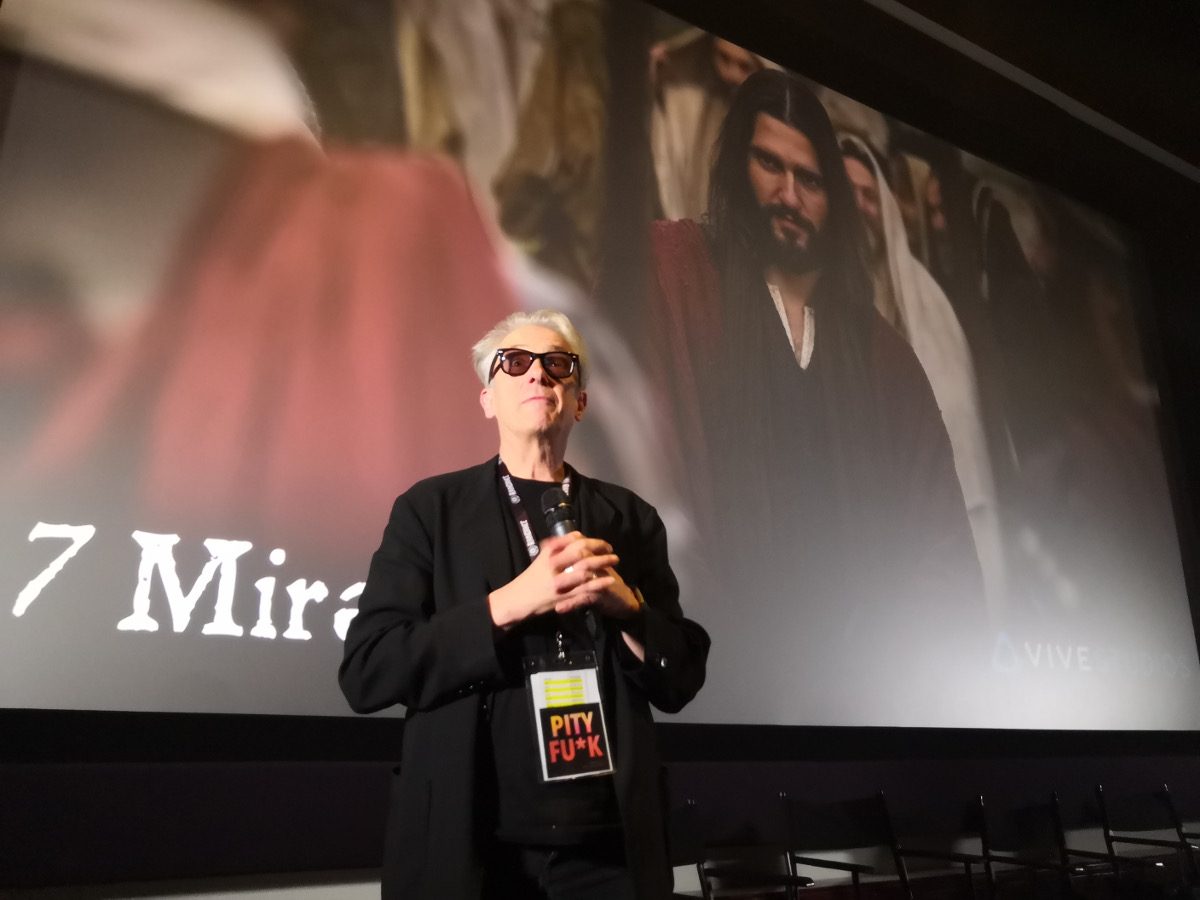 But that was my cross to bear rather than a reflection on the quality of the production. In fact, I was rather surprised at how much I enjoyed it, specially the chapter where Jesus turned water into wine. Jesus generally comes across as a dude you’d definitely invite over to your party. And yes, there is water-walking, so well worth a watch.

Audiences should be able to check out 7 Miracles for themselves soon, as it is planned for general release on all VR headsets later this year.