Tech Trends travels to the Basque Country to find out  how technology and science play a big role in gastronomic innovation.

“The evolution of modern gastronomy brought radically different ideas and models which blended new technologies, techniques, and embraced entrepreneurship and the dialogue between traditional cooking, science and art,” explains Joxe Mari Aizega, Director of the Basque Culinary Center as we tour the impressive facilities near Bilbao, in the Spanish Basque Country region.

The Center – founded in 2009 – was conceived from the need for an institution to advance knowledge in gastronomy through an interdisciplinary approach. Their 4-year bachelor degree in Gastronomy and Culinary Arts – which covers cooking, service management, applied science and culture – is a prime example of this, as Aizega explains:

“We have been pioneers in giving this holistic education in gastronomy, and our students learn physics, chemistry, biology, nutrition, statistics, science, but all in a very applied way. We now understand that gastronomy is a value chain that goes from products to technology to tourism.”

Spain became the epicenter of a gastronomic revolution back in the 90s, a movement spearheaded not only by chefs such as Juan Mari Arzak, Ferran Adrià, Joan and Jordi Roca and Santi Santamaría. Adrià, founder of elBulli (arguably the worlds’ most lauded and innovative restaurant) agrees that cuisine is driven by science – encompassing everything from physics to biology, chemistry and psychology. Much of his work also explored how different ingredients work together in terms of sensory perception, and how your senses can effectively be manipulated to enhance your enjoyment of food. 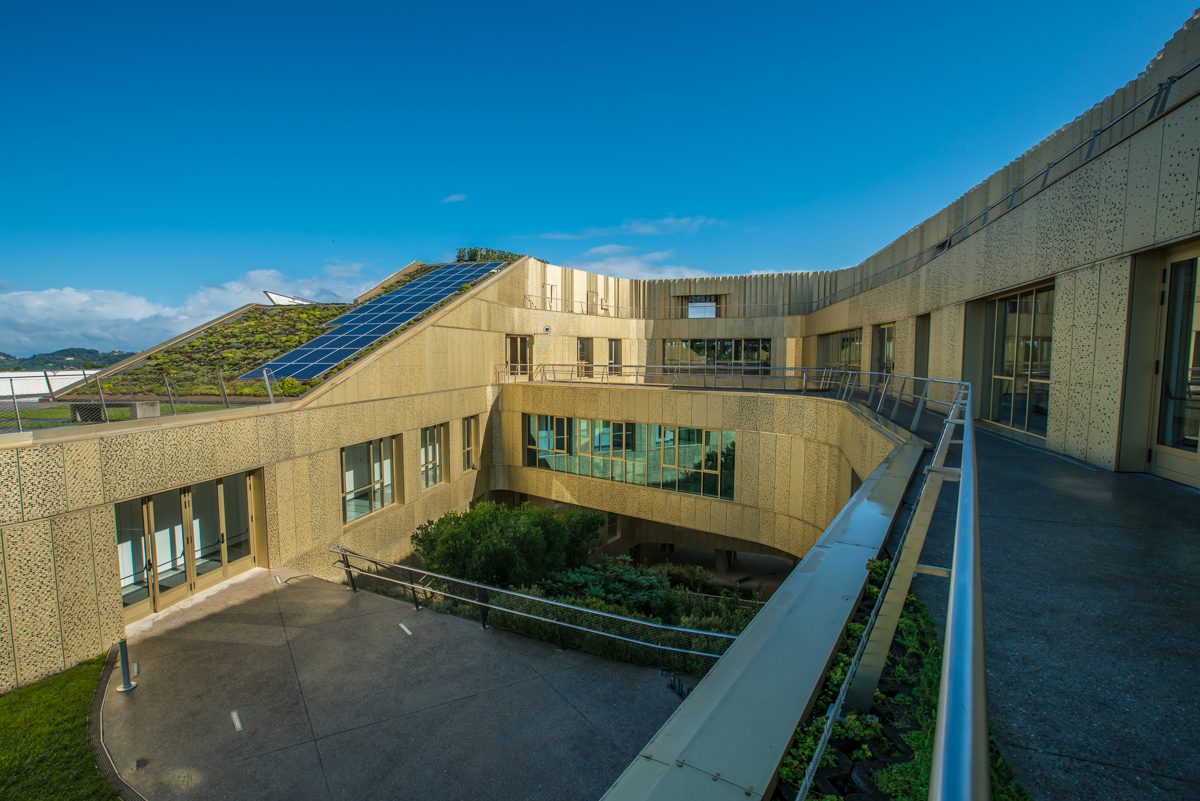 Professor Charles Spence from Oxford University collaborated not only with Adrià, but also Heston Blumenthal (who wanted to create sounds that were semantically complementary to his food) on experiments that explored how perception can affect the flavor of food. His research has shown, for example, that serving food on spoons made from different materials changes how we think about it, and that a dessert consistently tasted sweeter when presented on a white plate as opposed to a black one.

Initiatives like Brainy Tongue now want to continue exploring this intersection between gastronomy and neuroscience. While scientists study the neural mechanisms underlying sensation and cognition, chefs explore these mechanisms to create enjoyable experiences. 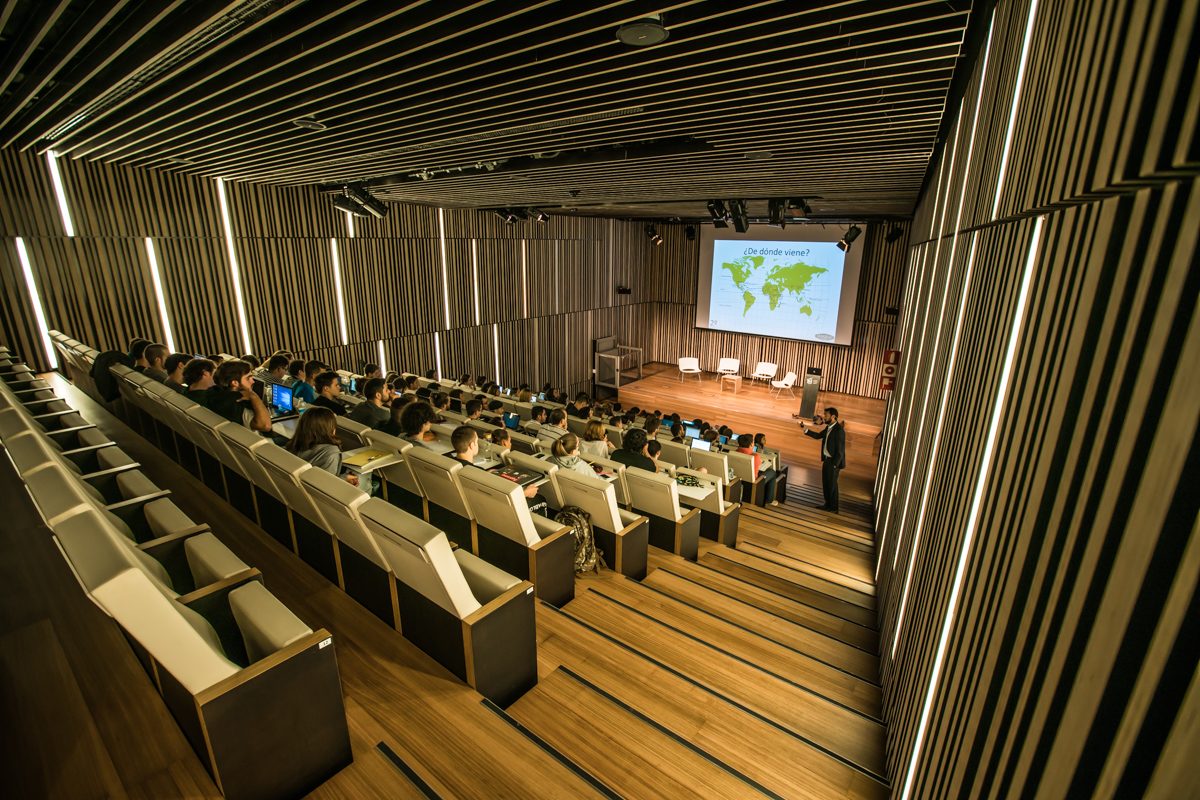 Adrià believes interdisciplinarity is crucial to the success of modern gastronomy, believing that creativity and talent only arise from a mash-up of science, the arts, philosophy and technology. He is so passionate about this concept, in fact, that a few years ago he closed his legendary restaurant, which had been many times voted best in the world, to start the elBulli Foundation – a center for innovation designed to rethink haute cuisine and marry it up with the latest digital technology.

This approach embraces openness aiming to share knowledge and create networks through which knowledge can be disseminated around the world. Which is why Adrià is also building a crowd sourced online database of crowd sourced gastronomic knowledge – La Bullipedia to use open data and visualization techniques to examine where innovation should occur next.

This all means big business – in Spain alone, the gastronomic value chain represents about 20% of its GDP – which explains the extremely high demand for places at the Basque Culinary Center. Aizega says they currently have around 550 full time students from 32 countries, with graduates consistently finding work in sectors as diverse as manufacturing, agriculture as well as hospitality. 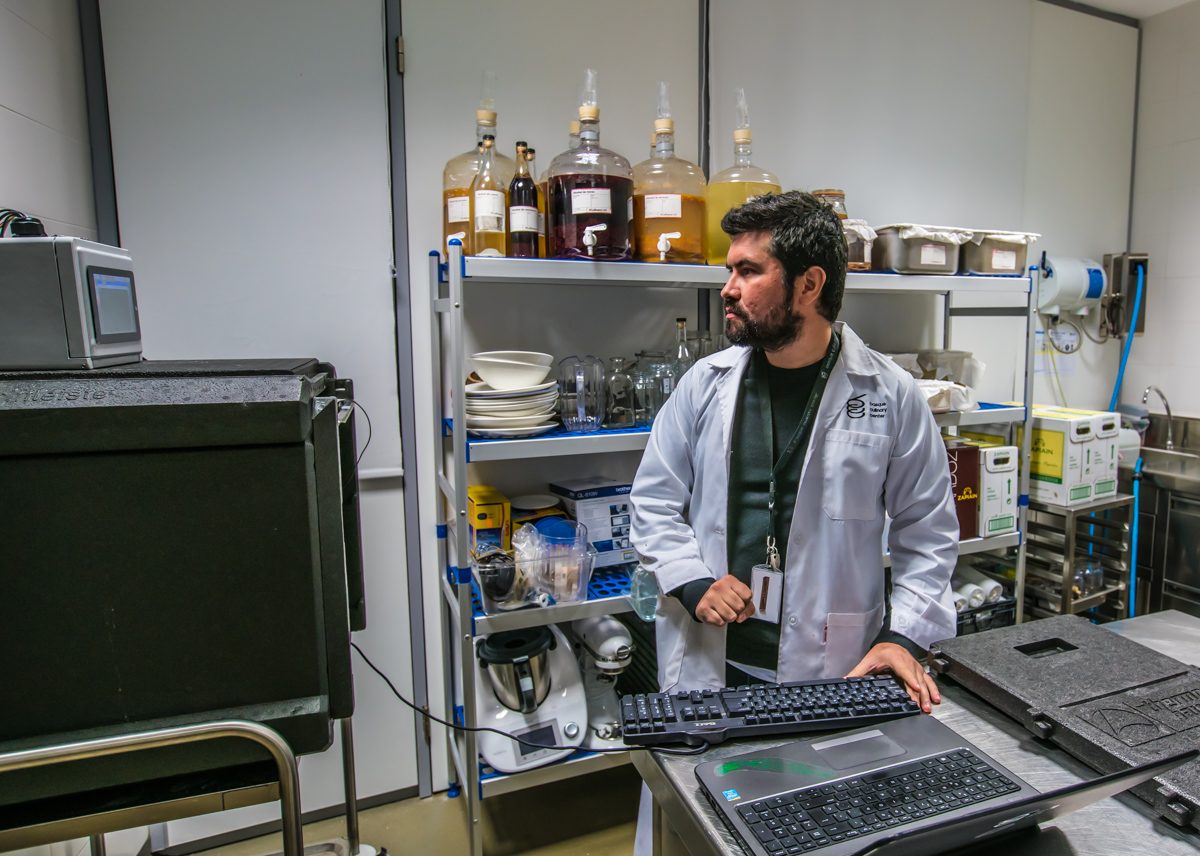 3rd year students can choose entrepreneurship as a specialization, and they have a chance to explore and grow their ideas through programs such as Culinary Action which seeks to foster the creation of an entrepreneurial ecosystem around gastronomic innovation through mechanisms like a dedicated incubator and accelerator.

“We accept very diverse types of entrepreneurs because we like the idea of very different companies from the value chain coming together,” Aizega explains, adding that the center also pursues a wide variety of collaborations with companies looking to test and refine their processes and products, as well as with other academic institutions around the world.

Diego Prado, an Associate Professor at the center, was keen to show me the result of one of those collaborations during our tour – a prototype nicknamed the ‘Fermentabot’ – which they have been working on with MIT’s Open Agriculture Group.

“It’s basically a very fancy sort of oven, with a lot of sensors, which is capable of creating its own micro-climate,” he explains.

The contraption is able to minutely adjust temperature, humidity, PH levels of oxygen and carbon dioxide, and electrical conductivity, and then monitor how ingredients react to these.

Since even small variations in factors such as temperature can drastically affect enzyme levels during processes such as fermentation, this sort of data gathering can prove incredibly useful to make food production more reliable, consistent, and resource-efficient without sacrificing flavor.

Quinoa, for example, has half the carbohydrate content and twice the protein of soy, so the center is working Bolivian restaurant Gustu (the latest enterprise from acclaimed chef and sustainability champion Claus Meyer) to develop a way of using it as a base for making products such as soy sauce and miso. 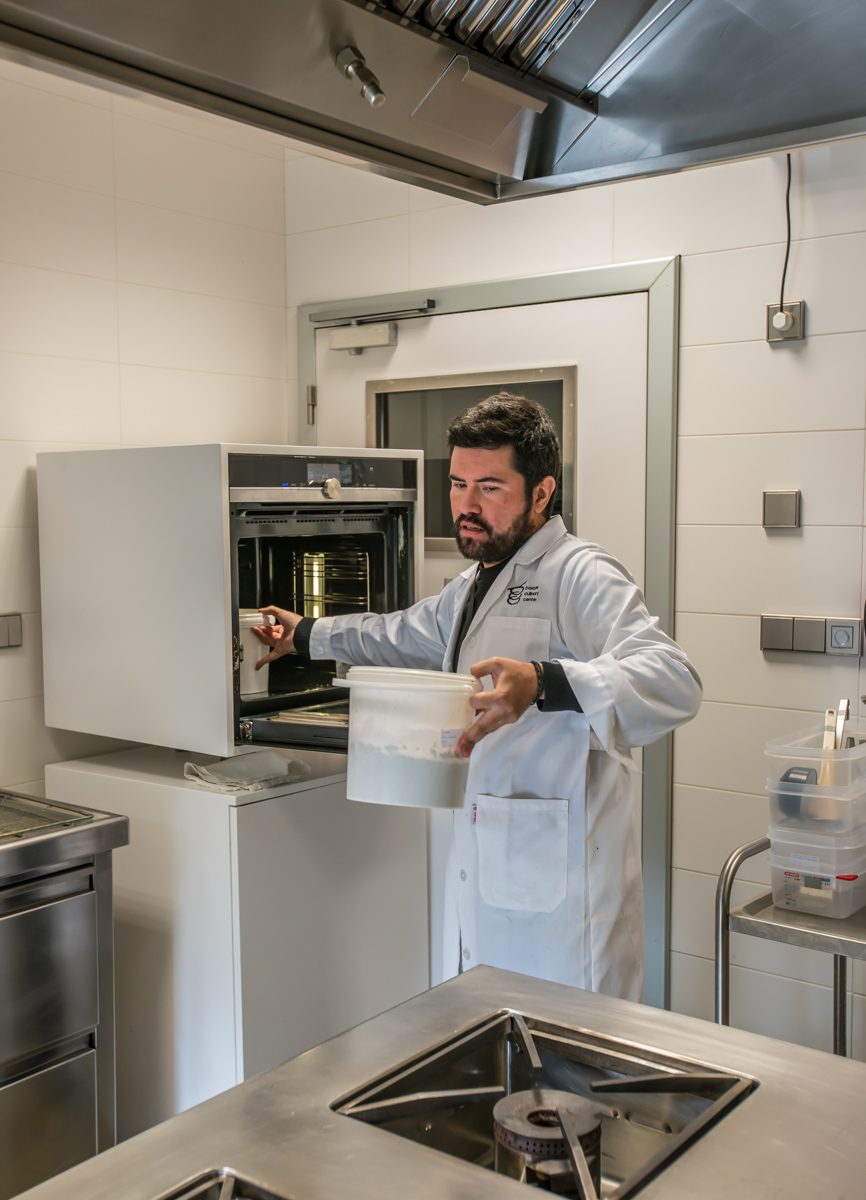 As he explains this, Prado brings out their latest batch of koji (the name given to the fungus used as a base in the process of brewing soy sauce and making miso). It does not look appetizing but actually smells really appetizing in spite of needing about 15 days further fermentation.

At the lab, they also explore many surprising ways of curbing food waste, such as using vegetable peelings and old bread to make things like vinegar or mash for fermenting koji.

“The gastronomic sector can and must be part of the solution to achieving sustainability and food security. The more variety and quality we have, the more sustainable our production, the more significant will be the contribution of gastronomy in the social, cultural and economic development of society,” says Aizega.

This socially conscious gastronomy movement was pioneered by people like Carlo Petrini who created the Slow Food movement in Italy, and Danish chef René Redzepi – who sparked a worldwide passion for foraging for wild, native produce, through to Alice Waters and Dan Barber who championed the farm to fork movement in the US. Project Gastronomía is one of many initiatives that now capitalized on the movement’s momentum and uses food as a catalyst for change through knowledge sharing.

Practices such as destructive farming can threaten biodiversity, yet so can indifference, argues Mexican Chef Ricardo Muñoz Zurita, adding that by ensuring ingredients are valued, chefs can be among the best guardians of that biodiversity: “When we don’t value their taste and use them in our kitchens– we can be oblivious and indifferent to their destruction. It is only when they are on our table that we have an interest in keeping them alive.” For him, not understanding how a natural ingredient can be used is another form of extinction. 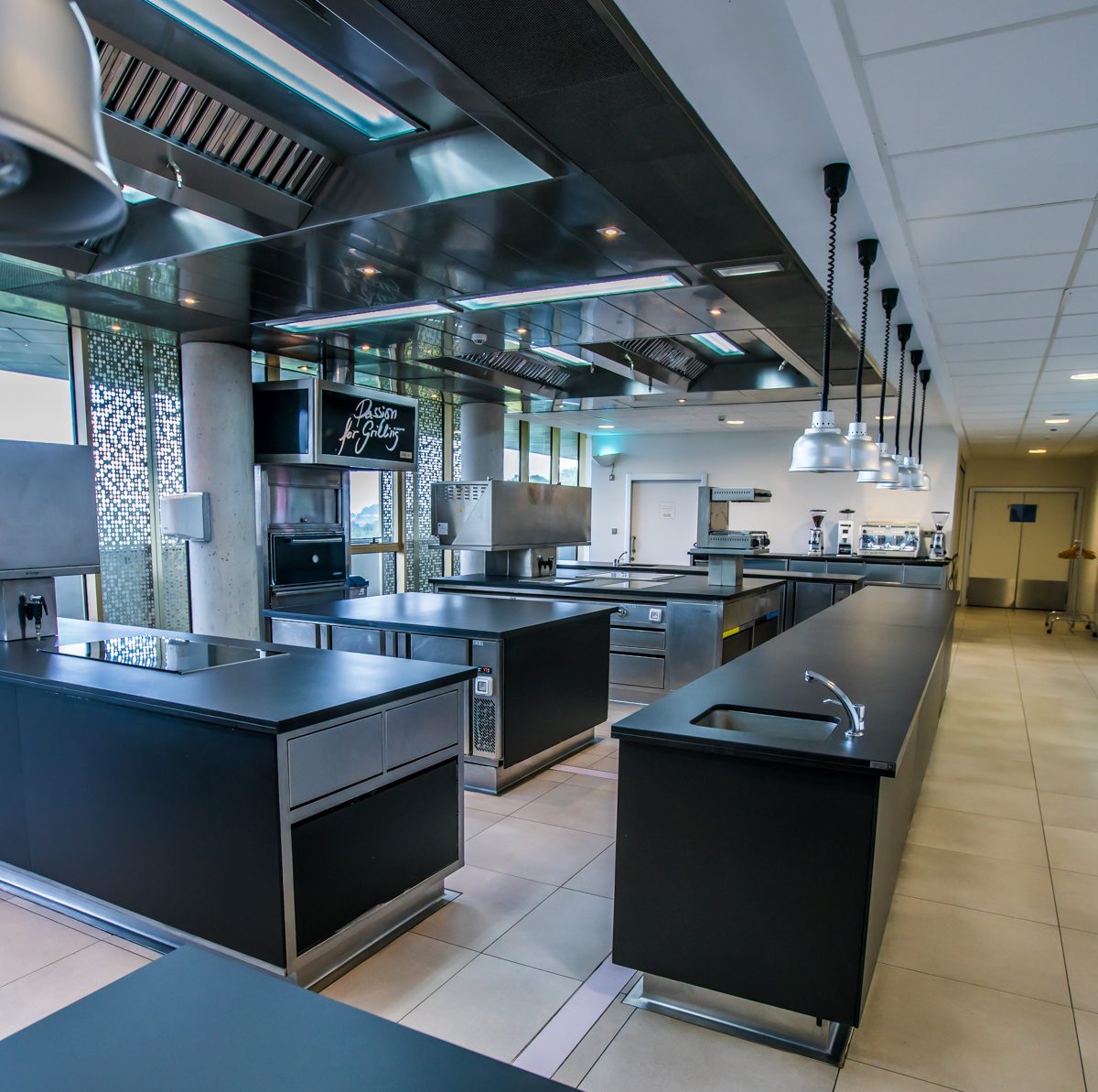 Another prominent figure in this growing band of chefs determined to preserve biodiversity is chef Leonor Espinosa, winner of the 2017 Basque Culinary World Prize, which recognizes projects that impact society ‘beyond the kitchen’. An economist by training, the celebrated Colombian chef promotes the sustainable use of local ingredients to combat climate change and support food security, taking a ‘whole food chain’ approach to her cooking.

“To understand Colombia’s national gastronomy,” says Espinosa, “you must begin by analyzing the relationship of its people with its ecosystems,” explains Espinosa, who now plans to use the 100,000 Euro Basque Culinary prize fund to support various local projects along the Nuquí Pacific coast.

Enabling indigenous populations to make a living from their local native produce is key to the success of her approach. Many of the traditional ingredients she uses at her Le Cocina y Cava restaurant are adopted from the indigenous, afro-descendant and peasant communities that she champions. Through her foundation Fundación Leo Espinosa (FUNLEO) she uses her knowledge to promote cultural and social development in indigenous and rural communities through culinary innovation.

It isn’t surprising that the Basque Country is home to initiatives such as the Culinary World Prize and the Culinary Center, as well as some of the world’s most innovative chefs. The region’s vibrant food heritage is firmly rooted in a connection with its land and culture, explains Ivan Jimenez, Managing Director of the Bizkaia Talent Network.

I had the chance to experience this first-hand during a recent trip to Biscay, where we were lucky enough to not only be hosted by Jimenez at his Txoko (a typical gastronomic society where members share access to restaurant-like facilities and cook regularly for friends and family) but also visit a variety of restaurants that showcased the many different ways that connection could be explored, from the classic Yandiola to the rustically traditional Baserri Maitea to the bold Japanese-Spanish fusion of Kuma, there were many expressions of creativity and innovation through food.

Yet the best example that embodied all these ideas was the recently opened ENEKO restaurant. Located just below the world-famous Azurmendi, this is the latest venture of Eneko Atxa, who was the youngest chef at the time to receive 3 Michelin stars. There is a strong focus on sustainability (Azurmendi was named the most sustainable restaurant in the world), as well as an emphasis on working with local farmers to source local ingredients. 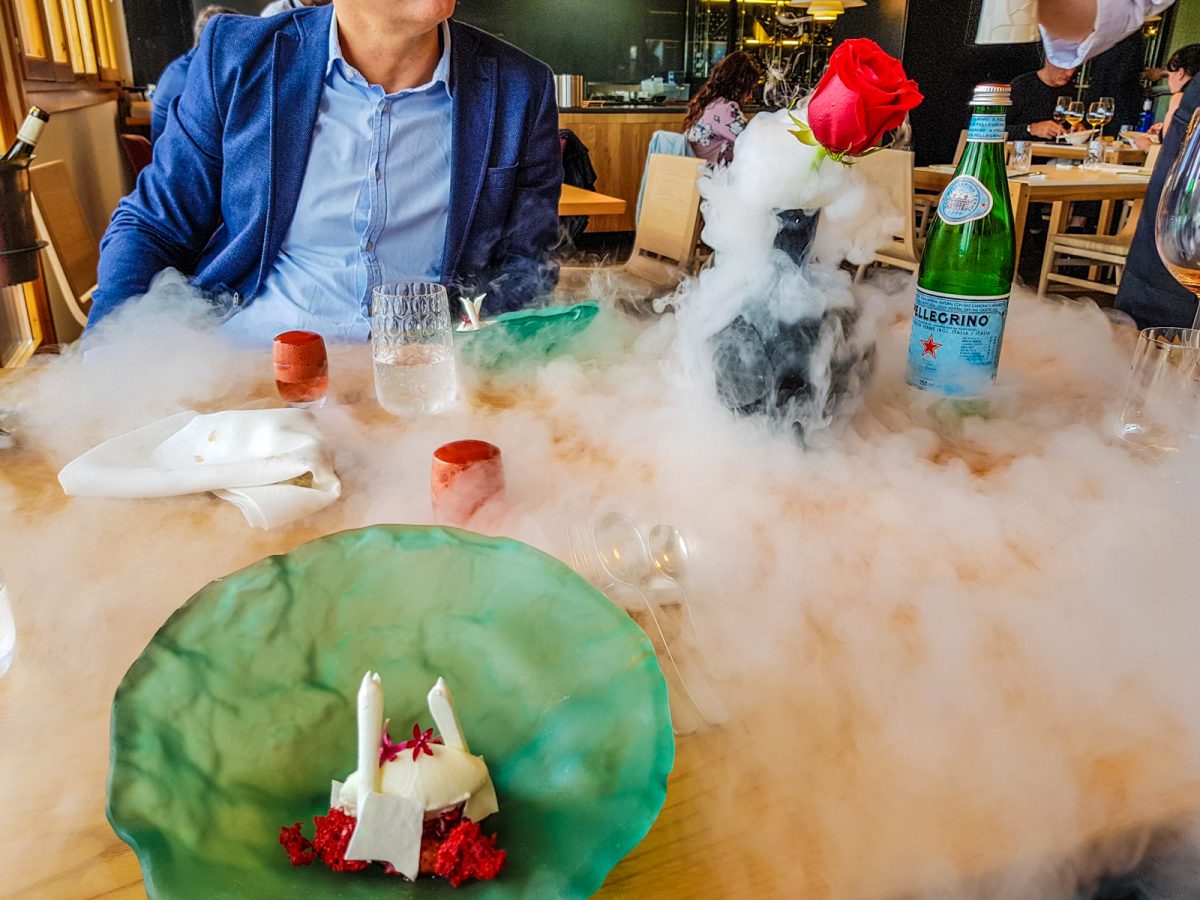 Our impressive 9-course tasting menu managed to harken to traditional Basque cuisine roots while also showcasing a wide variety of modern flavors and techniques, all wrapped up in a carefully curated experience where every aspect of presentation – such as pouring liquid nitrogen on a fresh red rose so that we could smell the flower’s aroma as we ate our dessert – was carefully considered to complement the food. 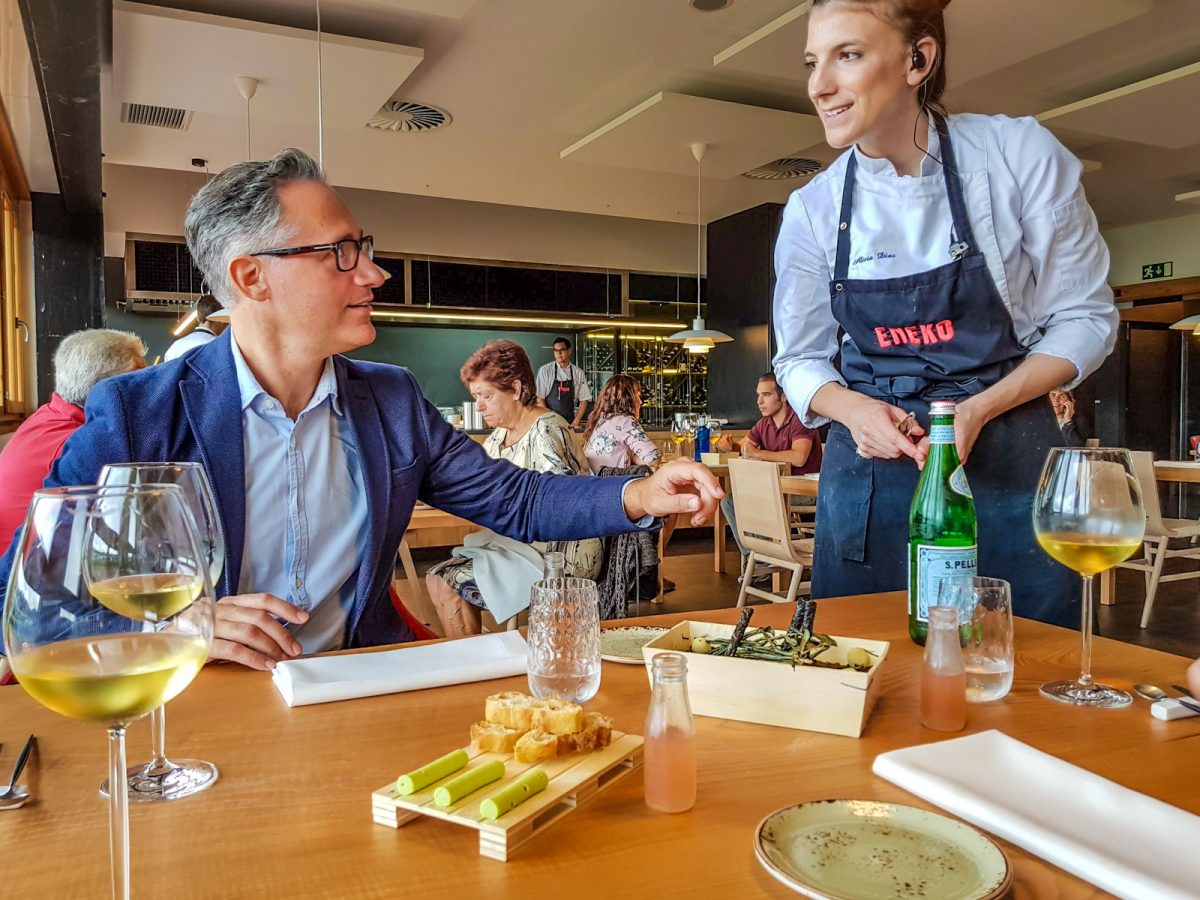 Everything was prepared in front of us in the open kitchen, a concept called Sutan which in Basque means “by fire.” This idea has become rather fashionable in restaurants around the world, but after talking to Jimenez and seeing the pride and happiness he took in cooking and eating with guests at his Txoko, it becomes clear that in places like Eneko this goes well beyond a gimmick. It’s an antidote to the outdated idea that the genius of gastronomy comes down to some sort of “secret recipe.”

Instead, the most innovative chefs nowadays recognise that producing outstanding and authentic food in sustainable and consistent way is a collaborative effort that thrives on knowledge sharing. And like the best technology, understanding what makes it work doesn’t take anything away from the magic of the experience.

This article was originally published on the Huffington Post