Could this be the future of agriculture?

John Deere is here at CES 2022 to share some of the history and innovation at John Deere that lead to this fully autonomous tractor.

Jahmy Hindman, Chief Technology Officer at John Deere, talked about the history and founding of the company during the press conference. In the 1830s, economic difficulties sent blacksmith John Deere from Vermont to Illinois where the soil was different. The cast-iron plows people used had to be cleaned and adjusted every few feet “because of the sticky Illinois soil.”

Deere created the “first steel plow” to deal with this problem. He focused on “the exact curvature of the tool” to create a steel plow that could be pulled easily by horses. This saved time and labor for farmers and allowed for a more streamlined process.

For the last couple of decades. the John Deere company has been focusing on pushing the envelope even further on advanced agriculture tech. In 1997, Deere began testing their first self-steering machine. The machine uses a “global satellite-based augmentation system to improve positional accuracy.” In 1991, John Deere purchased NavCom in order to “provide our own in house GPS and correction signal technology.” 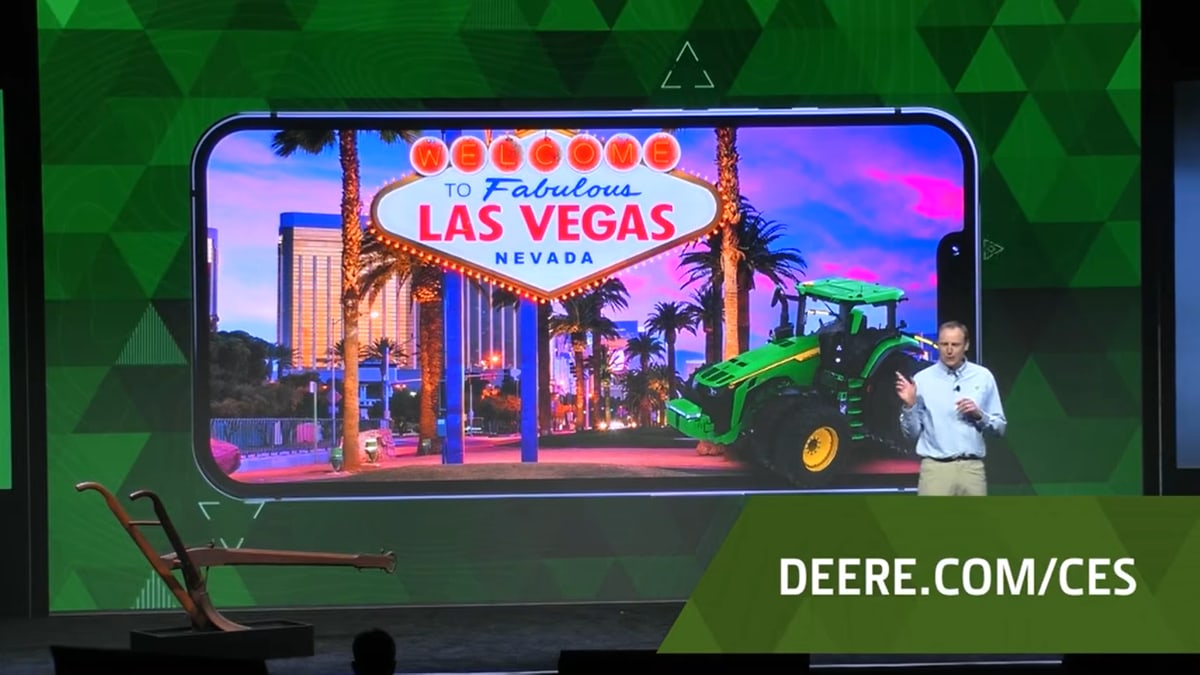 Now, with “Deere owned GPS technology and correction signals” they are able to guide machines throughout the field within 2.5 centimeters or about one inch of accuracy. This precise location-sensing technology allows farmers to spread nutrients, place seeds, and harvest their crops “without ever having to touch the steering wheel.

While the farmer sits in the cab of the truck they can look at real-time data they are collecting or focus on other tasks instead of constantly having to focus on steering. Hindman explains that this steering automation gives farmers the opportunity to make better decisions. 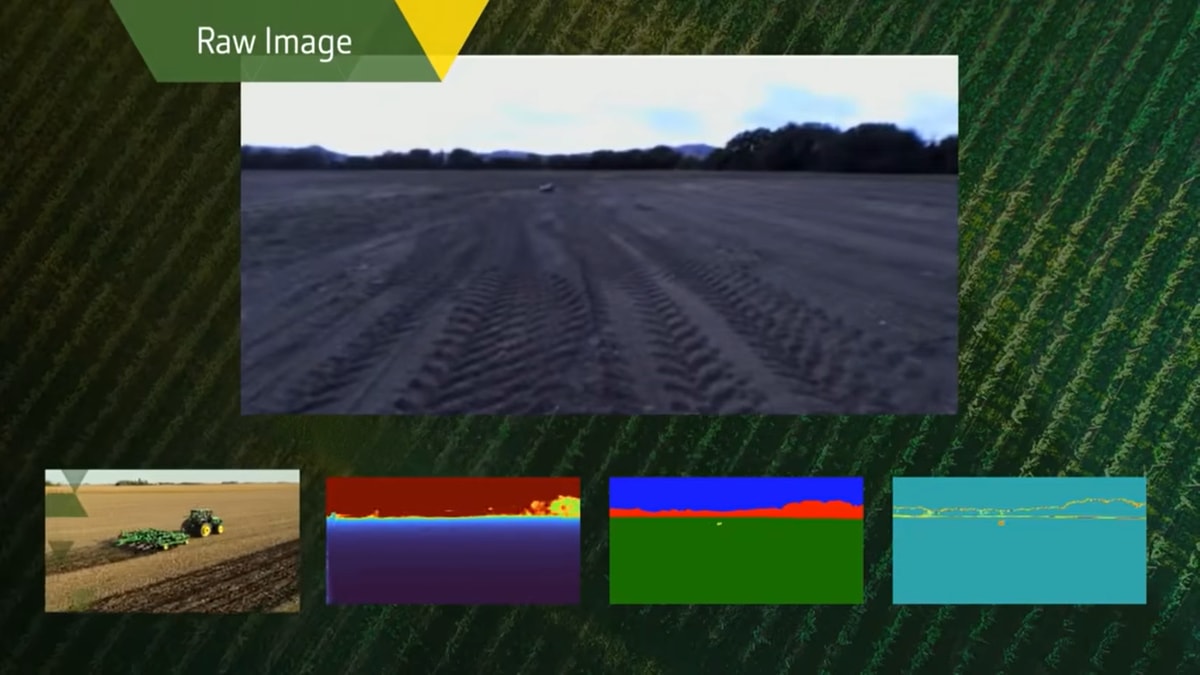 Hindman states that “until recently” agriculture was about doing “more with more” and “more horsepower – more inputs and more acres – yet the last decade has become about doing more with less and using additional tools to make more informed decisions. He believes that AI and machine learning will lead to a continually smart, ever-evolving, and more efficient farm.

Deeanna Kovar, Vice President of John Deere’s Production and Precision AG business, takes the stage to explain some of the challenges faced by farms today. She relates some of her experiences growing up on a family farm and the challenges facing current farmers.

On a farm, there are always tasks to be done and competing priorities, she explained. Many of these jobs are time-sensitive and there are not enough hours in the day to do them. Missing a time-sensitive deadline can have a harsh effect on the productivity of a farm. For example, when a farmer misses the optimal time window to plant seeds in the spring, it can reduce that year’s total crop by up to 1% every single day. 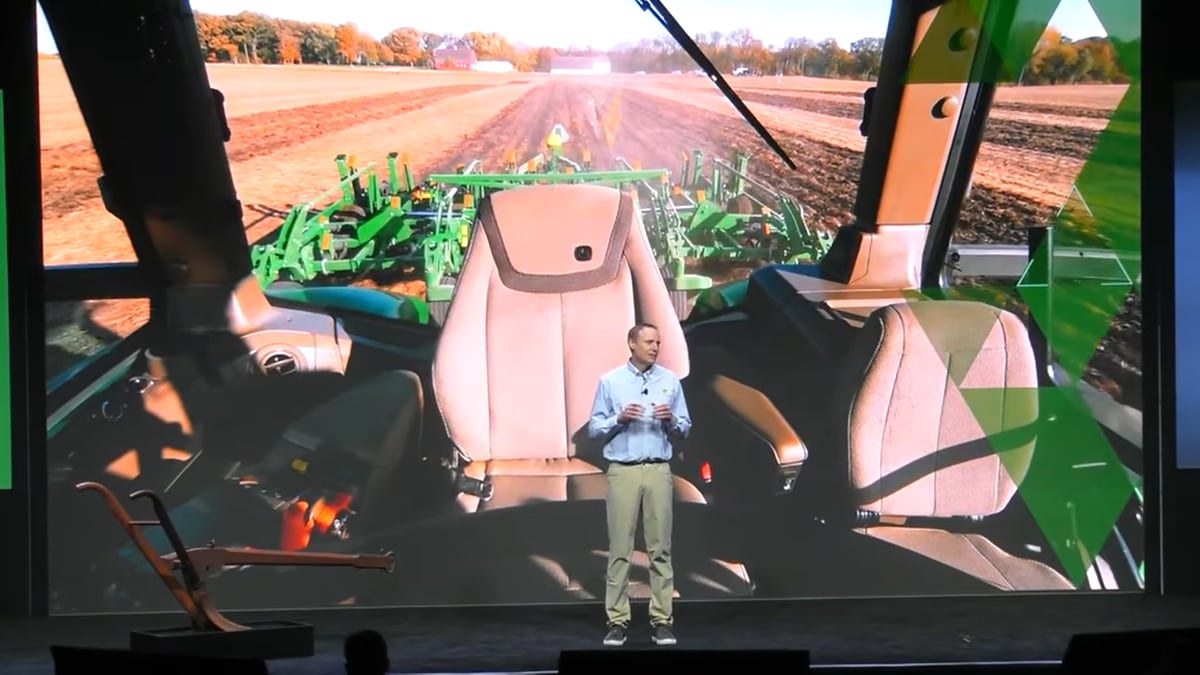 When a farmer misses the optimal time window to plant seeds in the spring, it can reduce that year’s total crop by up to 1% every single day #CES2022 Click To Tweet

Kovar asserts that there is also a shortage of labor. She says the average farmer is over 55 years old and the overall workforce is aging. As more people move from rural to urban environments this issue is further exacerbated. She sees the fully automated tractor as a potential solution to both of these problems.

These fully autonomous tractors have the flexibility to manage these time-sensitive and intricate tasks within their operation at scale. The tractor can handle some of the work that the farmers don’t have the time or labor to tackle.

In some ways, the automated tractor has a more difficult job than the automated vehicle. Kovar explains that a car needs only to get the passengers from point A to point B safely.” A tractor has many other concerns. It must do a precise job, on a precise path, and accomplish tasks such as prepping soil, planting seeds, applying nutrients, and harvesting crops.

What is the Autonomous Tractor

Willy Pell, Vice President of Autonomy and New Ventures goes into more detail about how the autonomous tractor works. He sees the tractor as a robot and explains that “fundamentally robots need to be able to do two things perceive their environment and make good decisions about what they perceive.” 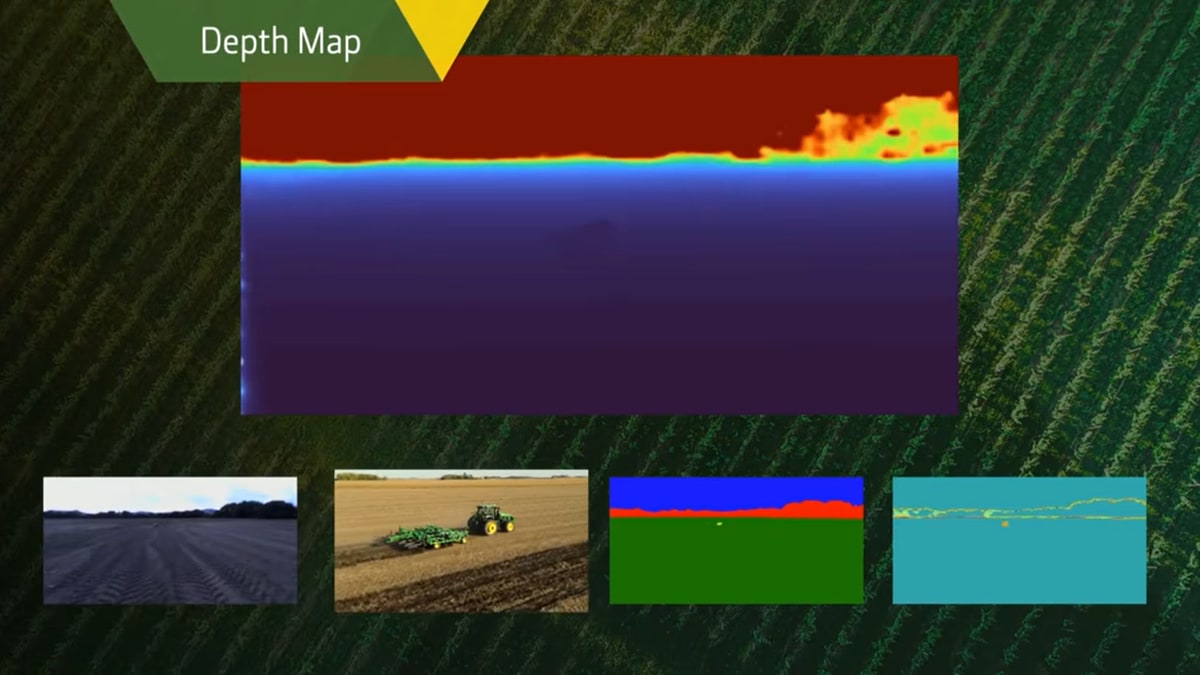 For perception, the automated tractor has six pairs of stereo cameras that enable 360-degree obstacle detection. These stereo cameras “work just like the human eye.” A human has “two eyes but only one image and the brain finds common objects between those two images and calculates the distance of the objects.” The tractor does “exact same thing with stereo cameras and machine learning.” After this, “machine learning algorithms running on GPUs interpret the output.” The tractor’s global position is tracked relative to a geofence, so it always knows where it is and where it is allowed to be.

The machine “sees” the environment around it and that information passes into “a deep neural network” where things are classified using Nvidia GPU processors. This neural network was trained on a large number of images which help it categorize objects like animals, branches, rocks, or things like that. The machine responds appropriately to the object based on the category.

If the machine encounters something it cannot categorize, like a “fallen billboard,” then it uses an “anomaly detection system.” If an object shows up and doesn’t fit “within the standard class of objects, the machine just stops.” Fortunately, there isn’t traffic in a field. So, when a tractor stops, “we don’t have to worry about getting rear-ended by a random driver.”

Julian Sanchez, Director of Emerging Technologies at John Deere speculates on a farmer’s potential experiences with an autonomous machine. He says that “the farmer only needs to transport the tractor to the field and configure it for autonomous operation.” After the machine is onsite, it can be started with a phone via their app. The tractor gives the all-clear beep and starts working.

The tractor's global position is tracked relative to a geofence, so it always knows where it is and where it is allowed to be #CES2022 Click To Tweet 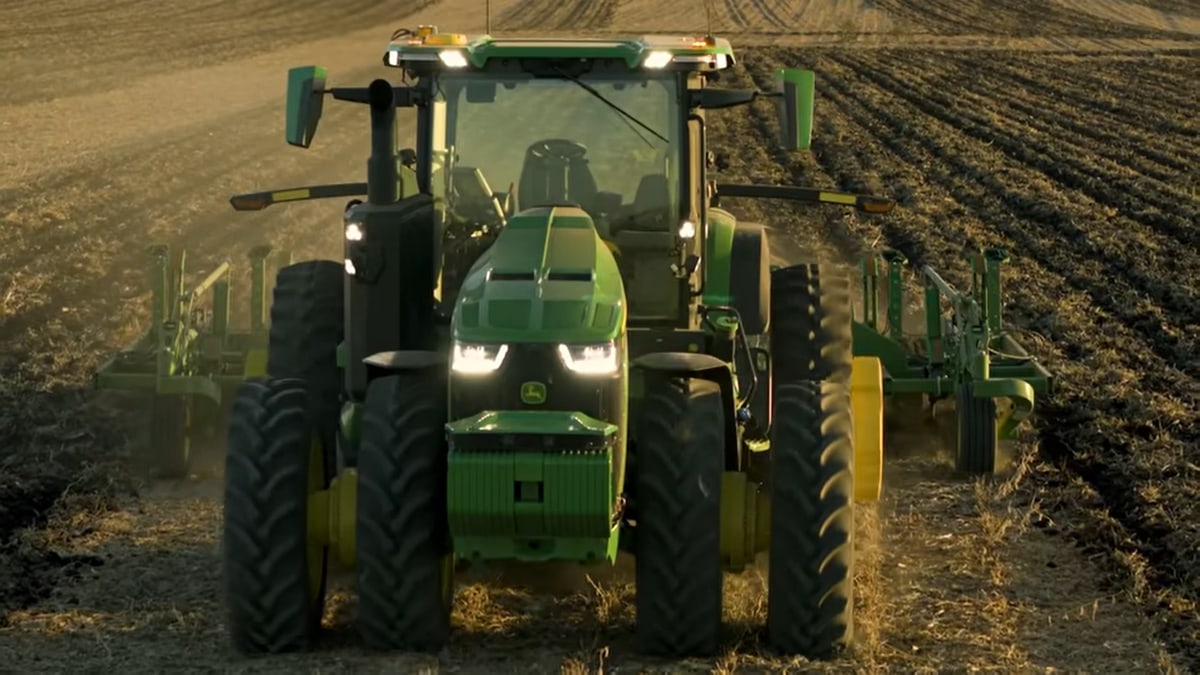 The tractor can run autonomously 24/7 and only requires a refuel every 8-10 hours. It collects data in real-time to help manage daily productivity and logistics, storing that data in an operation center for future strategic planning.

Jorge Heraud, Vice President of Automation and Autonomy explains some advantages of using this machine: For one, the tractor can place seeds perfectly in a field, at very precise distances, regardless of drive speed. This machine can also be used to differentiate between weeds and crops so that it sprays pesticide only on the offending weeds. This could save up to “80%” of the amount of pesticide a farmer would normally use.

The tractor can run autonomously 24/7 and only requires a refuel every 8-10 hours. It collects data in real-time to help manage daily productivity and logistics #CES2022 Click To Tweet 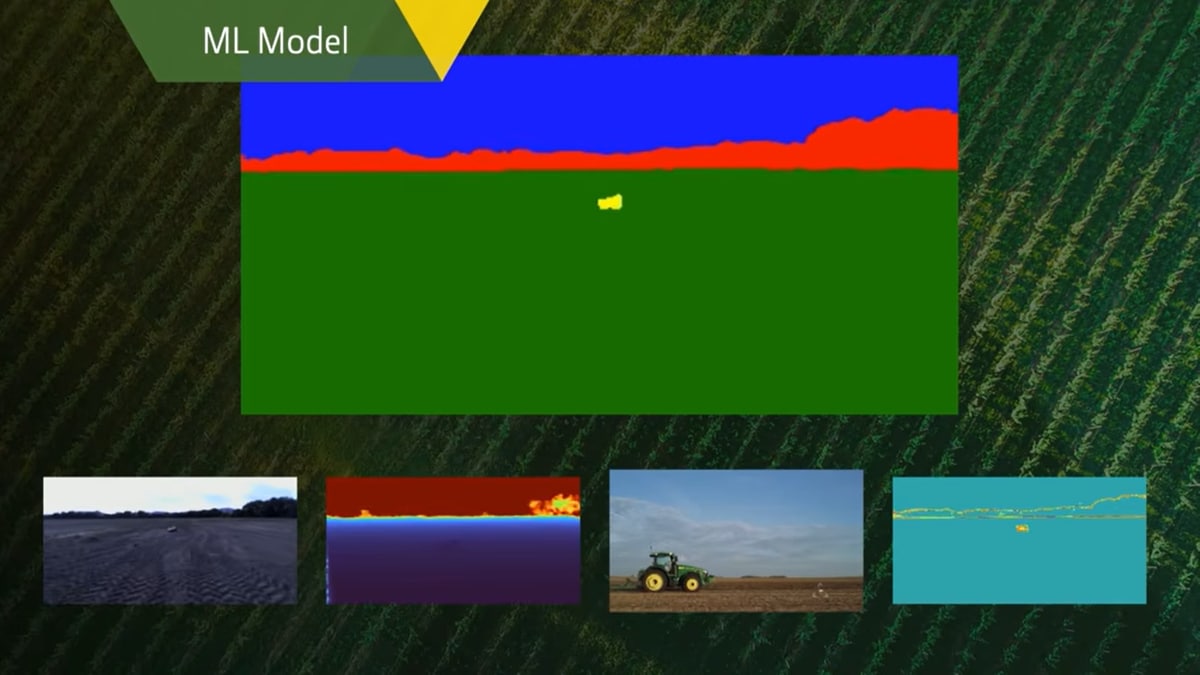 Heraud concludes with the idea that “autonomy is no longer just a concept or a demo.” These tractors will be available for sale later this year. This may lead to some big changes in the world of agriculture. If widely adopted, technology like this could have an impact across many industries. The future is here.

If you want to check out the design of the tractor, John Deere provides a QR code at their custom CES URL johndeere.com/ces