Making Virtual Reality social is all about building the right environment

“Facebook is the social network of this reality, but we want to enable thousands of new realities where people can socialize,”

Herman Narula, founder and CEO of Improbable, might be smiling as he says it, but he is very serious indeed about his company’s ambitions to take over the social VR space. Fresh out of one of the strangest VR experiences I’ve had, that started to make sense. The demo had involved me donning a HTC Vive headset and entering the MetaWorld. In this cheery, cartoon-like environment I met Dedric Reid, Founder and CEO of Berkeley-based HelloVR, who are partnering with Improbable in building the first of these alternative social realities.

As Reid appeared before me in the shape of a beardy head floating above Mickey-mouse-like gloved hands, we took our places across from each other at a chess board. I took a moment to marvel at the realistic physics of the game, where it really felt like I was holding the pieces in my hand. But as fun as that was, the most interesting thing was how it felt like I was really sharing that space with Reid – who was talking to me from San Francisco at what was for him 6:00am – much more so than with the 3 people in London who were physically in same room as me. In fact, when they spoke, THAT felt like the intrusion of a weird, other-worldly presence. My reality was very much the virtual one. 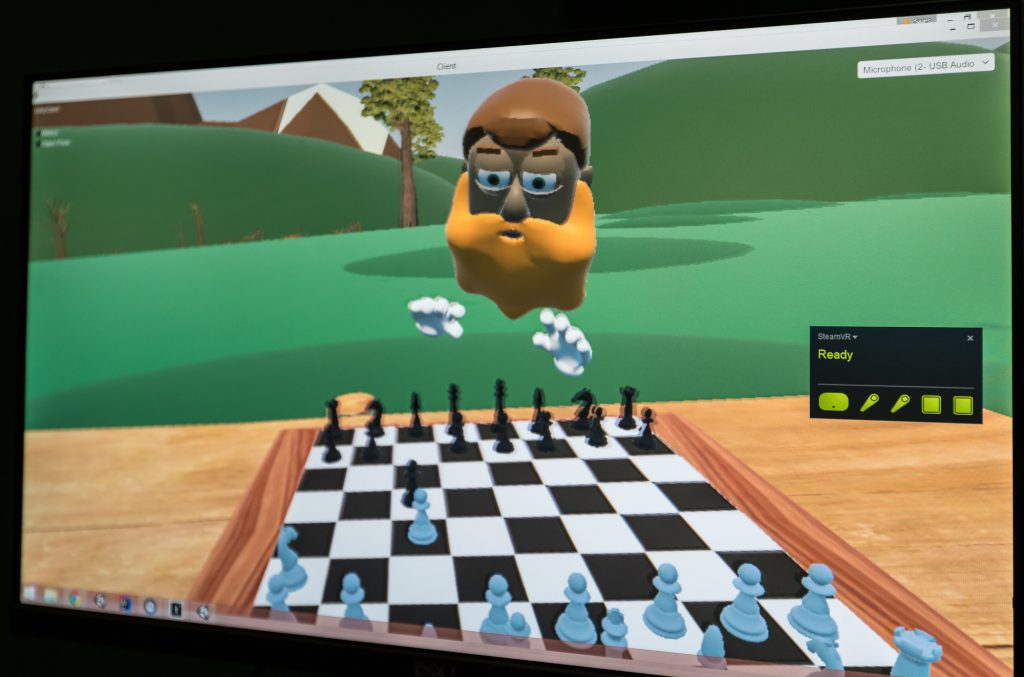 “Creating a social VR experience poses new challenges like head tracking on a massive scale, and networked physics so people can realistically interact in a persistent shared space,”

explained Reid even as he expressively moved his virtual hands to emphasise the point. The next step in improving that would be to figure out efficient ways of incorporating face tracking, to give avatars more realistic and responsive expressions. There’s even scope for using your tone of voice to convey your mood in the virtual world (they do say you can hear a smile or a frown over the phone, so perhaps that could work.)

But even at this basic level the experience is pretty powerful. If I turn my head, the sound of Reid’s voice fades, so that I automatically turn back from my inspection of the pitched tent behind me. We “walk” over to the campfire together, and as we get there the sparks float around his avatar, not through it, so that his face, which looks nothing at all like a real person, very much feels like one. The other strange thing is that, unlike with a phone conversation, I don’t find myself holding even a vague mental picture of what the person might actually looks like. The avatar gives my brain enough of a visual anchor, so I just focus on what they are saying. It opens up some really interesting possibilities for using avatars in meetings and interview situations to avoid bias based on physical appearance, for example.

The avatar gives my brain enough of a visual anchor, so I just focus on what they are saying Click To Tweet 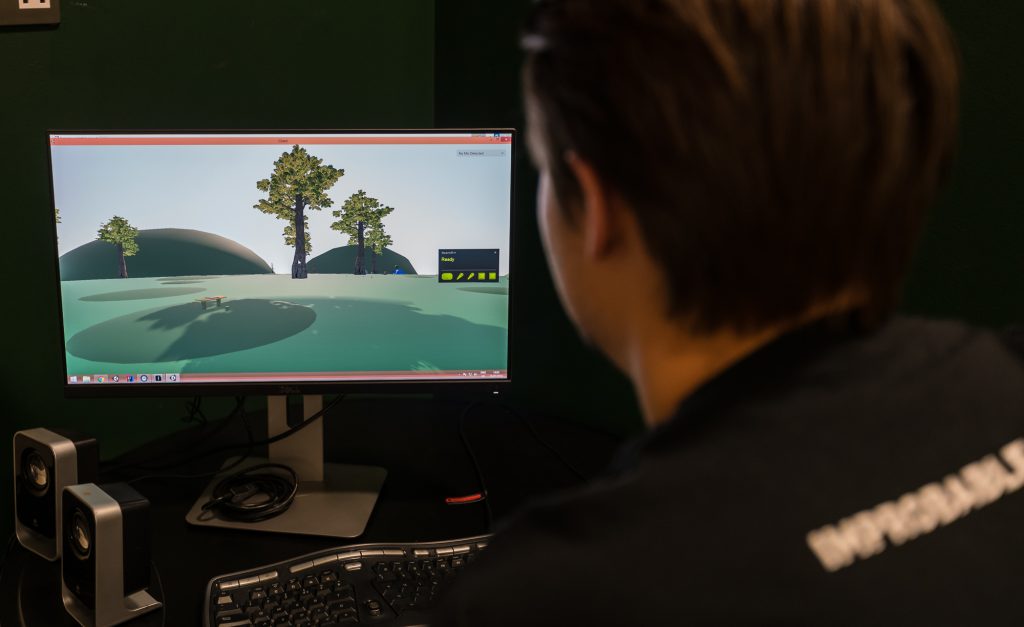 This is not about fancy graphics, at least not yet. What HelloVR are showcasing is the power of simultaneous presence in persistent worlds. Persistence translates into worlds which remember your actions, and where those actions continue to shape the world even after you leave. On our virtual chess board, for example, the knights were facing the wrong way because Callum – who had set up the demo and was admittedly not big on chess – had placed them that way. That did as much to bring the environment to life as all the impressive physics around it. The world was further enhanced by realistic flocks of birds flying past at what felt like random intervals, all controlled by IBM Watson. These mechanics will scale up to cover nearly 10,000 square miles of this virtual world, all of which will be “always on” with something always happening whether or not users are there to see it.

This massive scaling is enabled by Improbable’s distributed operating system SpatialOS, which can harness the power of hundreds or even thousands of cloud servers in a single interwoven fabric, enabling real-time high-fidelity simulations without loading screens or artificial gateways. 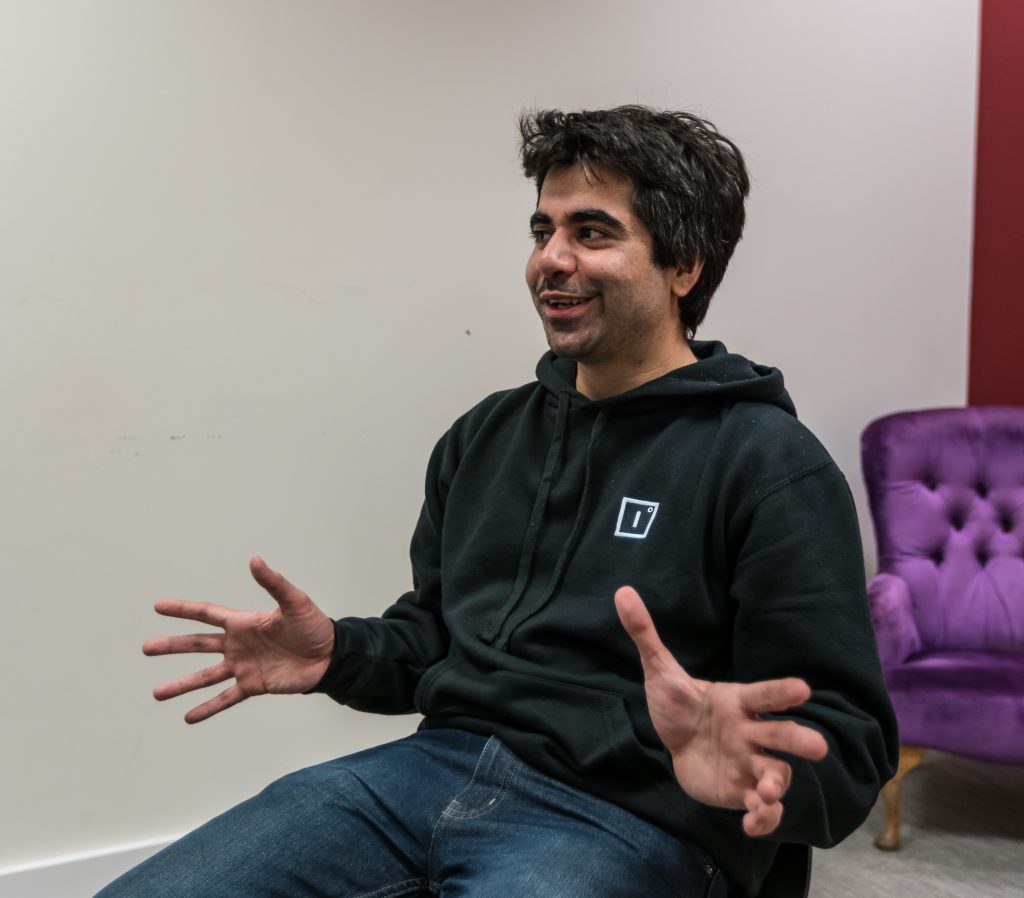 “The promise of VR is half about the devices and the immersion and half about the world and its meaning, but nobody is solving the problem of making that world come to life,” says Narula. “The Matrix is two pieces, and the other part of it is the actual Matrix.”

And that is the key to what makes Improbable so exciting. They are making the under-the-hood infrastructure that will enable not only individual VR experiences, but for us to build and share those experiences collaboratively, over time. So instead of building lots of mirror-image parallel universes that don’t talk to each other, you have massive persistent environments populated by creatures and objects over which you (and all the other players in that world) have direct influence. If you cut down a tree, it stays cut. If someone else kills an animal, you can stumble across the decomposing carcass, unless it’s been carried away by scavengers. In other words, instead of focusing just on making spaces, they’re building timespaces, where this sense of actions taking place persistently over time affords a real feeling of presence and permanence, and since this is the way we perceive our own reality, it follows that the latter feels that much more immersive.

“This is fundamentally a new technology. We’re talking about thousands of people and millions of objects interacting dynamically in the same world,” explains Narula. “These are massive infrastructure issues that no one developer is able to solve. When you scale a game in that way, we’re enabling a type of parallel computation across thousands of cores that simply hasn’t been possible before. Yes we’ve made it more accessible so that developers can easily build content on the platform, but we’ve also moved the goalposts in what it is those developers can do.” This is perhaps why Improbable has attracted such interest, recently securing $20 million Series A funding from Andreessen Horowitz and growing to over 100 employees.

The fundamental test, Narula explains, is what he calls the “Gibson Threshold”, named after science fiction author William Gibson. The key to achieving this threshold is consistency rather than realism, by creaeting a world so persistent that it starts to matter (really matter) to you. “When we get to the point where we ask someone whether their imaginary house matters to them as much as their real one, and they start to hesitate, you know you’re nearing that threshold,” says Narula. And you only get there by building an environment where your actions have consequences, and where you feel that you have real influence over others and the world which you share. That sense of connectedness is – perhaps unsurprising – the holy grail to making VR experiences immersive, compelling and social. 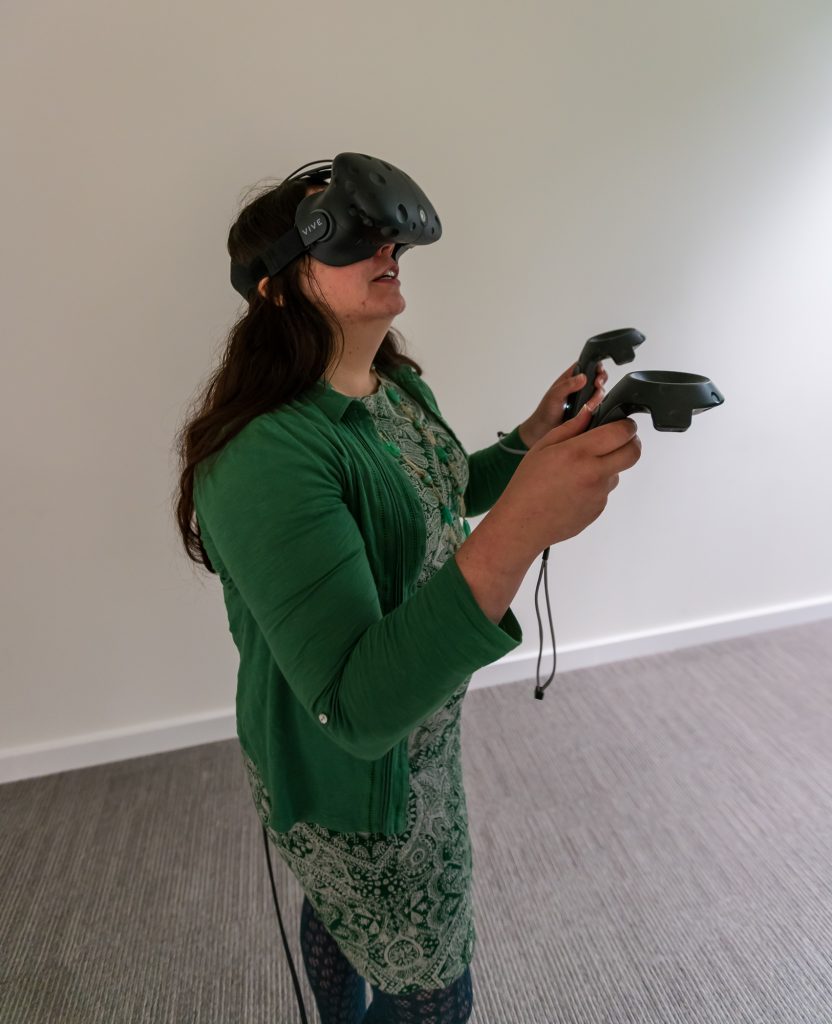 Creating a sense of connectedness is the holy grail to making VR experiences immersive, compelling and social. Click To Tweet

So, is Improbable building Ernest Cline’s Ready Player One “Oasis”?

“Well, sure,” laughs Narula, but the key difference that in the book you only had one Oasis, and we’re going to build lots of them, each with its own look, feel and rules.” These worlds will all be build on the Improbable SpatialOS, so will still be able to share elements between them where it makes sense.

He’s right. Even at this early stage there are already several of those worlds being built. In addition to MetaWorld they are working with Entrada Interactive (Rebel Horizons), Soulbound Studios (Chronicles of Elyria) and Bossa Studios (Worlds Adrift). We got a sneak preview of that last one in the improbable office and it looked quite impressive.

The environment in Worlds Adrift is, I’m told, roughly the size of Israel. But unlike other massive worlds, in this one every single part of it is reachable, changeable, and open for exploration. There is something distinctly otherworldly about knowing that “out there” really does exist, says Narula, “there are no loading tricks or fake backdrops or locked doors: if you can see it, you can travel to it.” 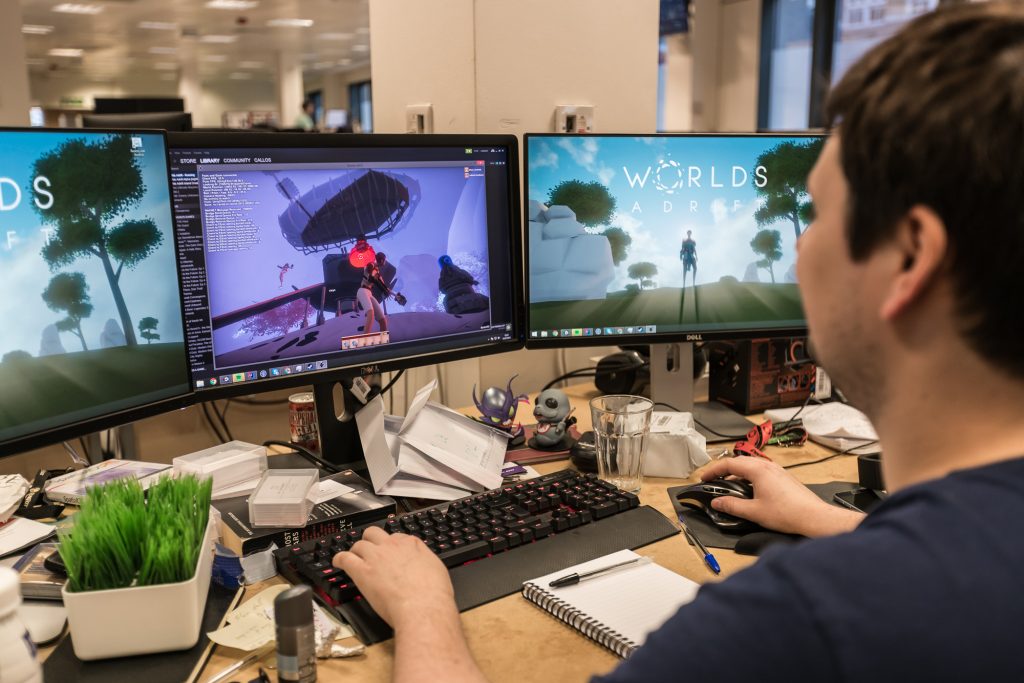 He points to a cloud in the middle of the sky in the game, and tells me that any player can travel to it if they wish. Granted, they’ll still need to build a ship powerful enough to take them there, but luckily a developer on the workstation around the corner was doing precisely that as we spoke. On his screen the complex-looking engine pieces were coming smoothly together, and it looked like it might indeed fly.

Narula believes there will be an explosion in new VR projects on the platform, helped by the fact that they’re open sourcing it. “All of the code for Worlds Adrift has been made Open Source, the first MMO to have done that,” he says.

MetaWorld is currently on closed alpha, with a Pioneer Edition expected later in the year, which will let users who sign up for early access take part in outdoor simulations including camping, fishing, farming, archery, hot air balloon flights and even meditation retreats (watching the birds flock above was quite relaxing, so I can see that working). Next year they will make a suite of creative tools available for users to start building their own experiences, using a ‘MetaBlox’ toolkit. The idea is that they will be able to do this either alone or collaboratively, and build things over time as there will be no “world wipes” to free up server space. And although it worked very smoothly on the HTC Vive, MetaWorld will be platform agnostic and available on other devices such as Oculus and PlayStationVR as well as non-VR users on standard computers and mobile devices.

The Matrix is two pieces, and the other part of it is the actual Matrix Click To Tweet

It remains to be seen how this compares to other initiatives such as Project Sansar, currently being developed by Second Life creators Linden Lab, which is also set to start opening up its platform to early adopters later this year. There is huge momentum building around social VR and user-generated content, however, and it will be interesting to see who gets a head start in that arms race. 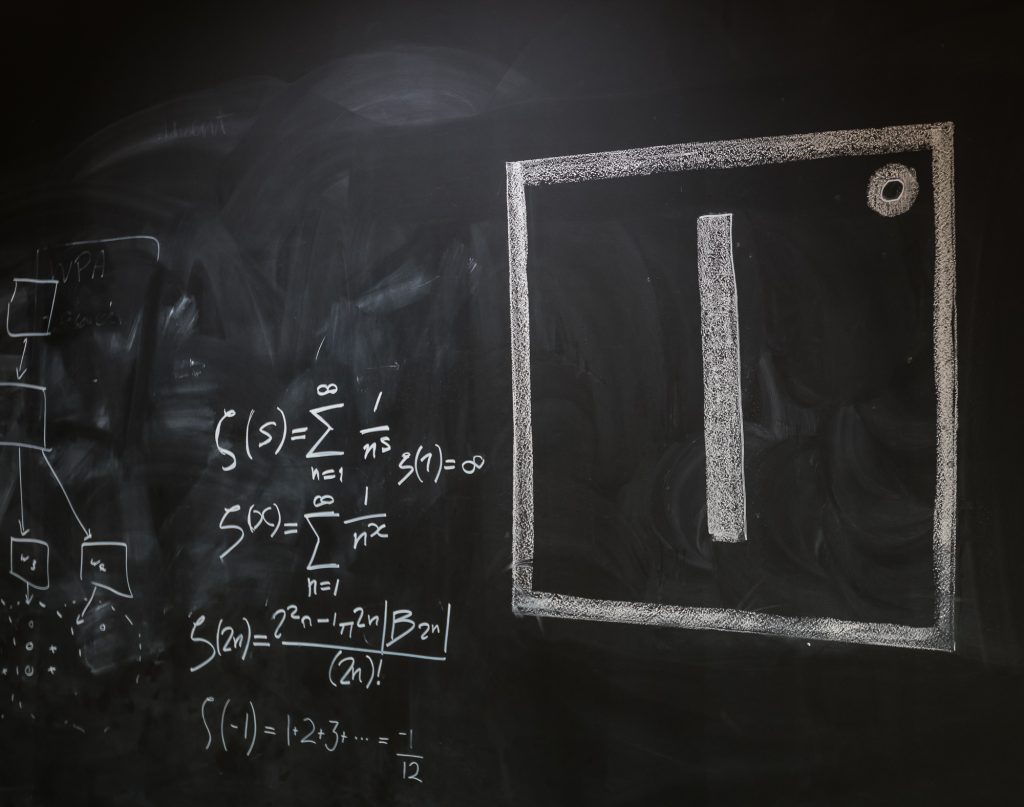