The report published today by global analyst company CCS Insight shows the worldwide market for virtual reality (VR) and augmented reality (AR) head-worn devices growing by an average of 50 percent annually over the next five years. In 2022, a total of 121 million units will be sold, with a value of $9.9 billion.

The firm’s research indicates that VR headsets have been the main source of growth in unit sales to date, and although this trend is expected to continue – particularly with smartphone-powered mobile headsets – there is also an expectations that the next generation of HMDs will ignite a new wave of consumer interest.

“We expect stand-alone headsets like the Oculus Go and HTC Vive Focus to ignite a new wave of growth that will help broaden the appeal of virtual reality, particularly with businesses and in education,” says George Jijiashvili, CCS Insight’s senior analyst for wearables.

Gaming remains the primary reason for sales of VR devices and this is unlikely to change over the next few years. The research shows that nearly 70 percent of customers who own a dedicated VR headset such as an Oculus Rift, HTC Vive or Sony PlayStation VR have bought games for it, and more than half of smartphone VR owners bought games for their device.

“There’s a growing array of exciting new content being developed. We saw in our latest consumer survey that virtual tourism, remote participation in events such as music concerts, and virtual social interactions are all emerging as further uses for virtual reality. Watching video is also proving popular, particularly on mobile headsets”.

AR smart glasses also show much promise for market growth according to Jijiashvili, as the report notes that in spite of businesses recognizing the potential of the technology, they have so far limited their adoption to purchasing a few units (just 24,000 AR smart glasses were purchased by business in 2017). However, CCS Insight predicts that over the next few years businesses will move from limited trials to wider deployment, with sales reaching a milestone of 1 million units in 2022.

“Given augmented reality is one of the hottest new technology areas in smartphones, it’s not surprising that interest is mounting in augmented reality glasses. Billions of dollars are being invested in this technology and we’ve seen significant improvements in the size, weight and design of smart glasses over the past 12 months. The potential of this technology is clear, but so far most companies are evaluating a few units to see how the technology fits into their operations”.

“We’re encouraged by the technology developments in smart glasses for consumers. Products such as Intel’s Vaunt glasses are a clear signal of the direction these devices are moving in, with a design little different from a pair of standard prescription glasses. It only takes a big company like Apple to jump into the market and we could be looking at market of millions of smart glasses in no time at all,” Jijiashvili concludes.

According to CCS insight, the forecast presents three scenarios (core, low and high) that plot the effects of different market developments, and is part of a broader suite of research into VR and AR devices, including an extensive database of over 100 devices in this area.

Stand-alone headsets like the Oculus Go and HTC Vive Focus will help broaden the appeal of virtual reality, particularly in business and education Click To Tweet 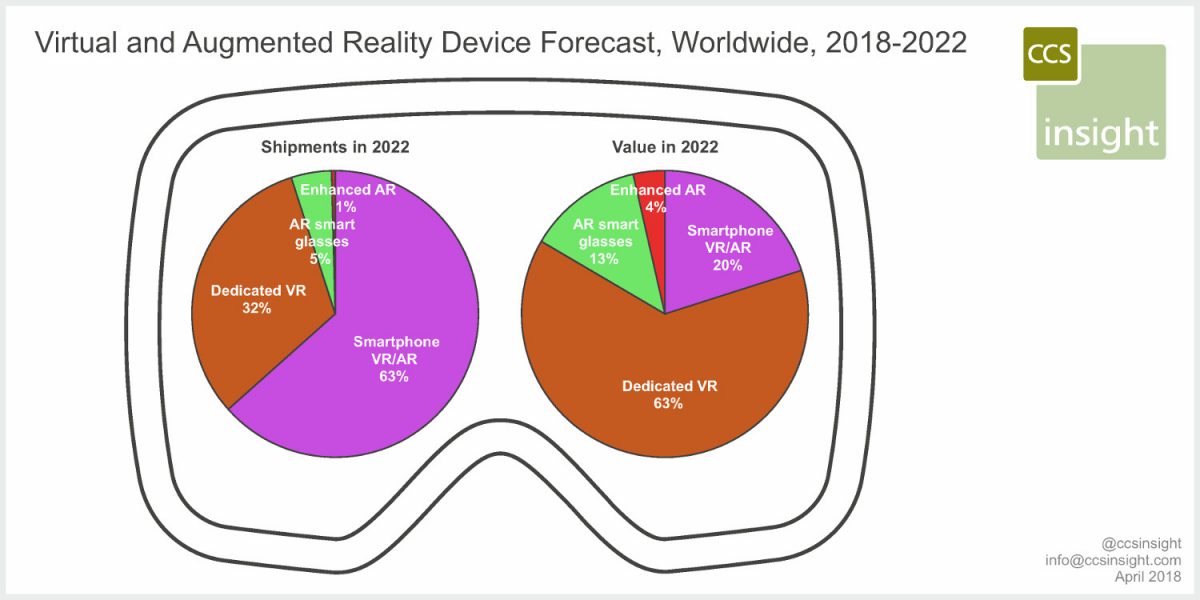 Key Insights from the report include: