With more retailers integrating immersive technologies in both their logistics and customer-facing operations, will consumers finally start buying into VR and AR?

These are doubtless challenging times for brick-and-mortar retailers who prove slow to incorporate new technologies in their operations – we don’t need to look much further than the collapse of Sears for a high profile recent casualty. But disruption also means opportunity for those who embrace innovation and are willing to reinvent themselves in the digital age, and immersive technologies are becoming an increasingly big part of that picture.

According to various analysts, AR will drive $122 billion in eCommerce spending by 2022 with e-Commerce expected to be the number 1 sector for AR. Smart retailers are looking to visualization tools like 3D products, Augmented Reality, and Virtual Reality as a way to show off more products in less space (or in the customer’s home), which reduces the need for square footage. 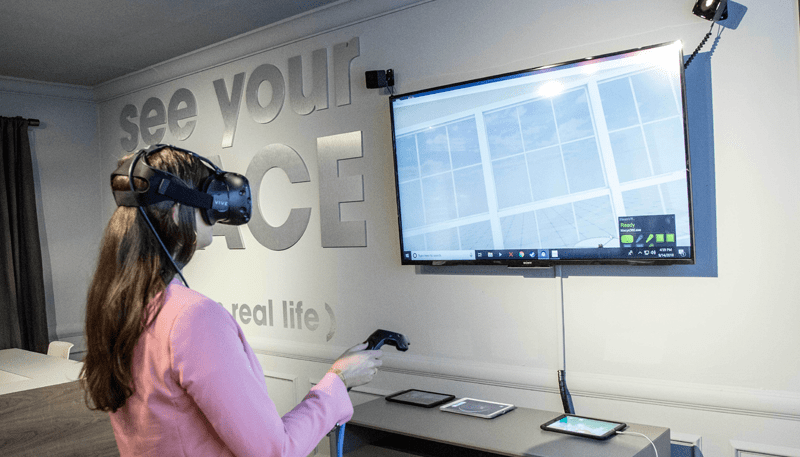 Amazon, IKEA, and Wayfair are all using these technologies to bring together the advantages of online shopping with brick and mortar retailing to add value to real-world shopping experiences with a minimal learning curve for both employees and customers. Macy’s Virtual Reality furniture experience, for example, allows people to design their own living spaces, populating it with items from Macy’s extensive catalog of products, using a headset VR headset to then walk around these spaces in Virtual Reality.

“There’s really no air between “traditional retailers” and “online retailers” anymore,” says Beck Besecker, Co-founder and CEO of Marxent, the 3D Cloud platform which powers the Macy’s experience. “The “traditional” players (like Macy’s) are embracing new technology and e-commerce sales tools, while online retailers are looking to move into the real world by opening stores or acquiring companies that already have them. (Think Amazon buying Whole Foods.) Moving forward, any retailer that’s not utilizing some combination of immersive technology with a physical presence in the real world is in danger of being left behind.”

Macy’s invested in a three-month pilot in stores of different sizes, and saw positive results. Based on those, they decided to roll out the technology to 70 stores, a process which was completed in October, with a further 20 locations set to go online by January 2019.

Amazon, IKEA, and Wayfair are all using immersive technologies to bring together the advantages of online shopping with brick and mortar retailing to add value to real-world shopping experiences Click To Tweet

“Customers can take a 2D floorplan and transition it to 3D in real time,” said Besecker. They also offer the opportunity for customers to use AR to place the product in their actual living spaces. Since implementation started, VR-influenced furniture sales have increased by more than 60 percent versus non-VR furniture sales, while returns are down to less than 2 percent when using VR.

“Since immersive technologies like VR still require some human assistance and expensive headsets most people don’t have at home, brick-and-mortar retailers have an edge to provide this type of on-site immersive shopping experiences,” Mickaël Jordan, Co-founder and COO of Augment, a company which works with many retailers to integrate immersive tech functionality into their offering. “In the meantime, the rise of the ‘endless aisle’ enabled by VR means that in the long run brick-and-mortar retailers will need to reduce the size of their stores drastically. The combination of physical and digital means much less space is required to show physical products, while a bit more space is required to provide high quality digital experiences.”

Ikea is one retailer that shows how this balance can be struck in a smart way by providing VR as an on-site service in strategic places where it makes sense to do so, such as helping shoppers build their kitchen with a specialist and visualize it in an immersive way. In parallel they also offer AR capabilities to let customers see how items look in their own home environment with the Ikea Place mobile app.

The world’s largest retailer, Walmart, has also embraced immersive technology in a wide variety of ways. They have actively explored the use of Mixed Reality technology such as the HoloLens to streamline its warehouse operations and recently integrated an AR functionality into their official app to help customers price-check items quickly in store (something that was created by a team of employees during an internal hackathon).

“When a customer launches the scanner, they get a direct connection between the digital and the physical world that their screen and camera lens creates for them,” says Tim Fields, Senior Engineering Manager at Walmart Labs.

In addition to filing patents for its own virtual showroom, the company also partnered with Spacee to create interactive Nest thermostat displays for several of their stores using what’s known as “post mobile AR” or “simulated reality” where any surface can be transformed into a touchscreen, effectively bypassing the need to use a device such as a tablet or smartphone.

Walmart’s most ambitious VR rollout to date, however, has been in staff training. They are scaling up their use of STRIVR’s VR training program on the Oculus Go in a bid to offer access to such training to every one of its U.S. based employees. Across the country, they will be sending 17,000 Oculus Go headsets to every Walmart supercenter, Neighborhood Market and discount store.

The world’s largest retailer, Walmart, has embraced immersive technology in a wide variety of ways Click To Tweet

Andy Trainor, Walmart’s senior director of U.S. Academies, says that the way VR promotes experiential learning translates into better results across the board: “When you watch a module through the headset, your brain feels like you actually experienced a situation. We’ve seen that VR training boosts confidence and retention while improving test scores 10 to 15 percent – even those associates who simply watched others experience the training saw the same retention boosts,” he explains.

“The immersiveness of well executed VR products and services creates an emotive connection between the employee and the content they are experiencing,” agrees Andy Mathis, Head of Partnerships, Oculus for Business. “We are seeing early results that when an employee feels a connection with training content through VR, they retain more of the training, and show better results, faster, in the execution of their jobs.  This illustrates very real ROI.”

Walmart plans to use VR to train associates in soft skills like empathy and customer service, and compliance, yet the technology is also particularly helpful in teaching employees how to use new technology. In a pilot test this summer, 10 of their stores used VR for training on new Pickup Tower units before they were even installed, with no instructors required on site. And although Walmart won’t share specific costs, it is clear that VR training compares favorably to traditional methods both in terms of pricing and flexibility, which is why, by the end of the year, the company aims that all of its more than 1 million associates will have had access to VR technology at their stores across the U.S.

“VR training helps us train more associates on a large variety of topics. We have more than 45 virtual reality training modules covering areas like compliance training, new technology and soft skills,” says Michelle Malashock, Corporate Communications at Walmart, adding that having access to the standalone Oculus Go headsets was a key part of scaling up the deployment. 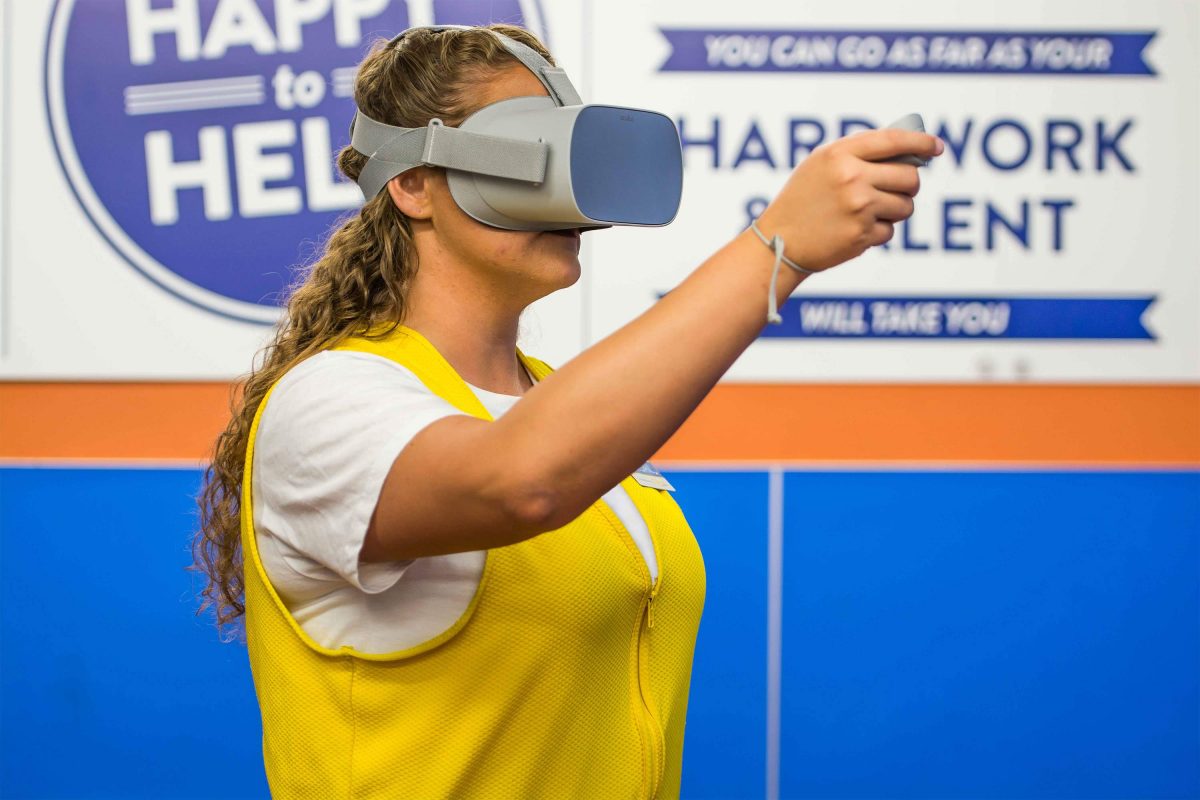 “The portability and low price point of Oculus Go lends itself to scaled deployments, and the Walmart deployment of the Oculus Go in all 4,500+ of their US retail stores for employee training will represent a truly scaled, nationwide deployment of VR in a retail setting,” Mathis adds.

Joel Breton, VP Global VR Content at HTC Vive, believes there is vast untapped potential in virtual commerce: “The Immersive retail content category is an absolutely massive opportunity that has yet to be fully explored or developed by most retailers, he says. “At Vive Studios, we are very engaged with several retail partners to help them develop and deploy immersive v-commerce solutions to their business,” he explains.

Besecker concludes that they are “beyond encouraged” by these initial results, adding that customers seem to really love this new immersive way of shopping. “We hear the same things over and over again: The furniture looked and fit in the real world exactly like it did in VR; the process made them feel more confident in their purchases; they would not have purchased that day without the VR. The customers we’ve talked to enthusiastically recommend VR visualization to their friends and can’t wait to use it again.”

If established retailers are able to use immersive technology to energize customers and give them reasons to not only visit their stores, but make more purchases and fewer returns, this could indeed prove a game changer for struggling high streets and provide a much-needed boost for the economy, as well as a way for people to become familiar with technologies such as VR without needing to commit to purchasing a headset for their home. It would be interesting if, rather than gaming or even porn, it was shopping that finally gave VR the biggest push towards mass-market adoption. Whether or not that’s the case will probably become clearer over the course of the next year or so as more merchants follow suit and bring out their own immersive offerings.

With more retailers integrating immersive technologies in both their logistics and customer-facing operations, will consumers finally start buying into VR in a big way? #VRhttps://t.co/4NuBIxgk3D