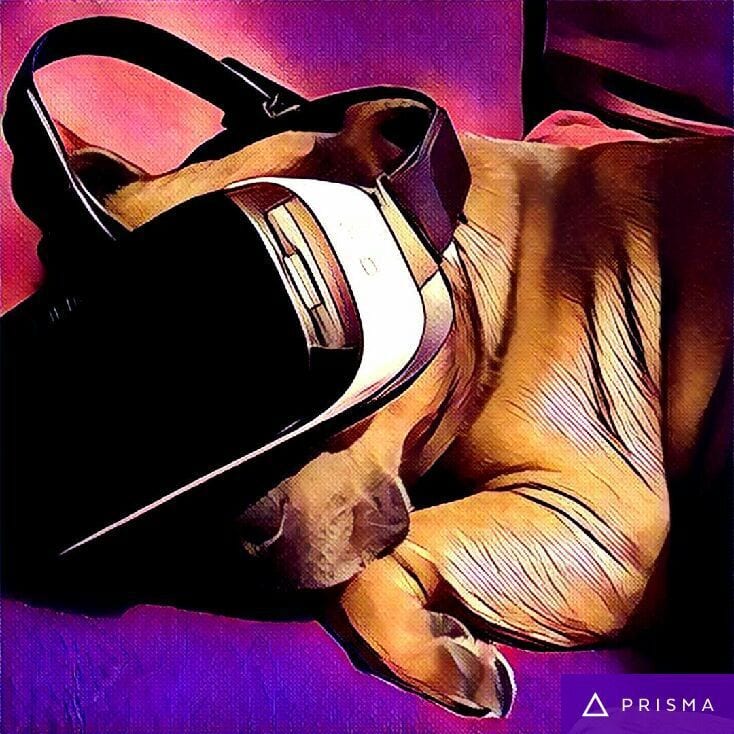 From the Internet of Things to Augmented Reality, Artificial Intelligence and Machine Learning, the Great Detective gives us some enduring insight into cutting-edge Technology.

In this article originally published in Quartz I examine how the Victorians who lived in Holmes’ London also lived in a time of huge technological upheaval, and how that revolution informed Arthur Conan Doyle’s stories.

The picture, in case you’re wondering, is of my dog Watson.

Sir Arthur Conan Doyle was a futurist, living at a time and place when the technology of the industrial revolution was radically transforming people’s lives. Many of the concepts he wrote about in Sherlock Holmes’s fictitious adventures formed the basis for pioneering forensics techniques that are still in use today. But the relationship between his best-known character and technological innovation goes beyond the techniques employed in the stories—Sherlock Holmes himself is technological disruption personified.

The Great Detective’s radical methods and innovation in the crime-fighting arena echo the collective hopes and fears of an era that saw technology both destroy and vastly improve people’s lives on a massive scale. For the Victorians, the first “horseless carriages” that started appearing in London toward the end of the 1800s—including in Holmes’s final tale, His Last Bow—must have seemed just as strange as driverless cars do to us today. But turn-of-the-century Londoners quickly became used to such technological miracles. Within a few short decades, they witnessed the introduction and popularization of railways, photography, and cinema, not to mention objects like typewriters, bicycles, gramophones, and sewing machines.

But much like for us today, the greatest disruption came from advances in communication technology. In 1866 Brunel’s SS Great Eastern (the largest ship of its time) laid a cable across the Atlantic that linked the two continents, and by the end of the century, a global telegraph network had been established that reached almost every corner of the world. (Sound familiar?) In 1887 there were many thousands of telephones installed in Britain and the US, and Marconi’s radio was also starting to take off.

Conan Doyle might not have been able to envisage today’s world, but the principles and philosophy that Holmes’s computer-like brain applies to solving mysteries are especially relevant today. In fact, they can help us make sense of some of the core technologies shaping our lives in the 21st century.

In a world where we create 2.5 quintillion bytes of data every single day, it is no wonder that some of the most valuable technologies out there are dedicated solely to helping people find information that is relevant to them.

Holmes lived at the cusp of the information era, and identified the hazards of a cluttered mind. In A Study in Scarlet, Watson discovers just how ruthless Holmes’s analytical approach to this problem is. When Watson is shocked that Holmes—whose “ignorance was as remarkable as his knowledge”—had no idea that the Earth revolved around the sun, Holmes quips that he will try to forget this fact:

“You appear to be astonished,” he said, smiling at my expression of surprise. “Now that I do know it I shall do my best to forget it.”

“You see, he explained, “I consider that a man’s brain originally is like an empty attic. And you have to stock it with such furniture as you choose. A fool takes in all the lumber of every sort that he come across so that the knowledge which might be useful to him gets crowded out, or at best he has a difficulty in laying his hands upon it. Now the skilful workman is very careful indeed as to what he takes into his brain-attic. He will have nothing but the tools which may help him in doing his work, but of these he has a large assortment, and all in the most perfect order.”

We need look no further than search technology to see this Holmesian principle in practice. The way in which Google constantly adjusts its search results based on what it believes to be contextually relevant to us is a prime example. In a world of information clutter, we’re constantly trying to clear our attic, yet there is also a fine balance between filtering out clutter and overlooking important information. The filter bubble effect that has been partly blamed for phenomena such as the shock of the Trump election shows what can go wrong when algorithms are tasked with making those decisions for us.

The Watson-Holmes dichotomy is also surprisingly useful in helping us wrap our heads around the concept of augmented/mixed reality (known as AR or MR). It is often difficult to grasp how virtual objects can be persistently anchored onto the real world. This means that someone wearing a headset such as the Microsoft HoloLens will see an entirely different reality than someone without it, yet those realities do consistently relate to one another.

By that logic, we can argue that Watson perceives reality as the un-enhanced “real” world while Holmes’s eyes allow him to see things through a spectrum enhanced by his analytical mind. The key—as Holmes explains to a befuddled Watson in A Scandal in Bohemia—lies in the difference between seeing and observing:

“You have frequently seen the steps which lead up from the hall to this room.”

“Well, some hundreds of times.”

“Then how many are there?”

“Quite so! You have not observed. And yet you have seen. That is just my point. Now, I know that there are seventeen steps, because I have both seen and observed.”

You know that feeling when something “clicks into place” inside your head? That’s basically what you get when your brain uses the information at its disposal to augment our reality. Someone can look at a car part and just see a lump of metal, while someone else with the necessary background knowledge will visualize it as part of a working engine. What AR can do is overlay that information onto the reality of someone without that pre-acquired knowledge. So if Watson was wearing a HoloLens, in this instance, he would not only see the steps leading up to Baker Street, but the added information regarding how many steps there were.

Similarly, In The Blue Carbuncle, Holmes applies this AR lens to demonstrate how objects hold a wealth of information to those who possess the right equipment to decode it. For Holmes, his formidable mind is all the equipment he needs, but nowadays these “enhanced objects” are becoming commonplace as Internet of Things (IoT) technology becomes increasingly pervasive. In the story, Holmes yet again surprises Watson by how much information he can extract from a seemingly ordinary lost hat that is brought to them.

“I can see nothing,” says Watson.

“On the contrary, Watson, you can see everything. You fail, however, to reason from what you see. It is perhaps less suggestive than it might have been, and yet there are a few inferences which are very distinct, and a few others which represent at least a strong balance of probability. That the man was highly intellectual is of course obvious upon the face of it, and also that he was fairly well-to-do within the last three years, although he has now fallen upon evil days. He had foresight, but has less now than formerly, pointing to a moral retrogression, which, when taken with the decline in his fortunes, seems to indicate some evil influence, probably drink, at work upon him. This may account for the obvious fact that his wife has ceased to love him.”

While Holmes clearly relies on the power of deduction to make Henry Baker’s hat “come to life” for Watson, technologies such as smart textiles have the potential to eventually record, retain, and decode data in such a way as to uncover all manner of interesting facts about their owners—and literally tell those tales to anybody with the equipment to listen.

In The Blue Carbuncle, Holmes applies this AR lens to demonstrate how objects hold a wealth of information to those who possess the right equipment to decode it Click To Tweet

After Holmes has furnished his “brain attic” with relevant information in the most perfect order, he then applies rigorously analytical processes to connect that knowledge and draw conclusions based on pre-set rules. This works much in the same way that we now use AI and machine learning to digest and leverage big data sets. In the Sign of Four, Holmes explains this in terms of the difference between observation and deduction:

“Observation shows me that you have been to the Wigmore Street Post-Office this morning, but deduction lets me know that when there you dispatched a telegram,” Holmes tells an astonished Watson, who confirms he is correct.

“Observation tells me that you have a little reddish mould adhering to your instep. Just opposite the Wigmore Street Office they have taken up the pavement and thrown up some earth, which lies in such a way that it is difficult to avoid treading in it in entering. The earth is of this peculiar reddish tint which is found, as far as I know, nowhere else in the neighbourhood. So much for observation. The rest is deduction.”

“How, then, did you deduce the telegram?”

“Why, of course I knew that you had not written a letter, since I sat opposite to you all morning. I see also in your open desk there that you have a sheet of stamps and thick bundle of postcards. What could you go into the post-office for, then, but to send a wire? Eliminate all other factors, and the one which remains must be the truth.”

As Holmes often demonstrates, having all the available facts is only part of the solution to a problem. The second half involves reasoning and deduction, which basically boils down to applying rules to a dataset and excluding possibilities in order to arrive at the most appropriate conclusion; it is no coincidence that IBM named its own AI engine Watson.

Holmes was as big part of my life as a teenager growing up in Brazil. I credit those stories with inspiring me to pursue a career I was passionate about as a technology journalist. Whenever I get befuddled by the awesome tech I write about, I take comfort in Watson’s example and remind myself that ignorance can be an asset that prevents you from taking a reader’s knowledge for granted, and losing them in the process.

As Holmes often demonstrates, having all the available facts is only part of the solution to a problem Click To Tweet

Those evocative tales of foggy streets actually inspired me to move to England, where I still live with my dogs, Watson and Mrs. Hudson. What I hadn’t realized until now was how these tales are not only a reflection of their era, but also a useful—and rather comforting—guide to those facing an uncertain and disruptive future.