I am alone in the empty streets of Austin. Everything has been simplified to geometric shapes and the stars are brighter than they’ve ever been in the middle of the city. Strange eyes look from high points and serve as a unifying aesthetic to the strange world. There are no bats, no rats, and no raccoons. The closest things I’ve seen to life are the hovering drones that await my instructions. Who made this strange, virtual, world? The story begins last March.

On March 6 of 2020, South by Southwest was canceled at the decree of the City of Austin. This occurred shortly before the event was scheduled to begin on the 13th of March and was one of the first of many large events that would be canceled as a result of the coronavirus.

#SXSW Online 2021 includes a variety of online meetings, sessions, musical performances, and many attempts at virtually recreating the interactive experience of SXSW Click To Tweet

This year, restrictions remained in place that prevented a full return of the in-person SXSW experience. However, the conference organizers decided to pivot to a digital format and that was the beginning of SXSW Online 2021.

SXSW Online 2021 included a variety of online meetings, sessions, musical performances, and many attempts at virtually recreating the interactive experience of SXSW. A notable addition to this is the SXSW Online XR experience. XR is an all-encompassing term referring to include Virtual Reality, Augmented Reality, Mixed Reality, and other forms of immersive media.

I sat down for a video chat with Blake Kammerdiener, XR and Film Programmer, to learn more about this project. 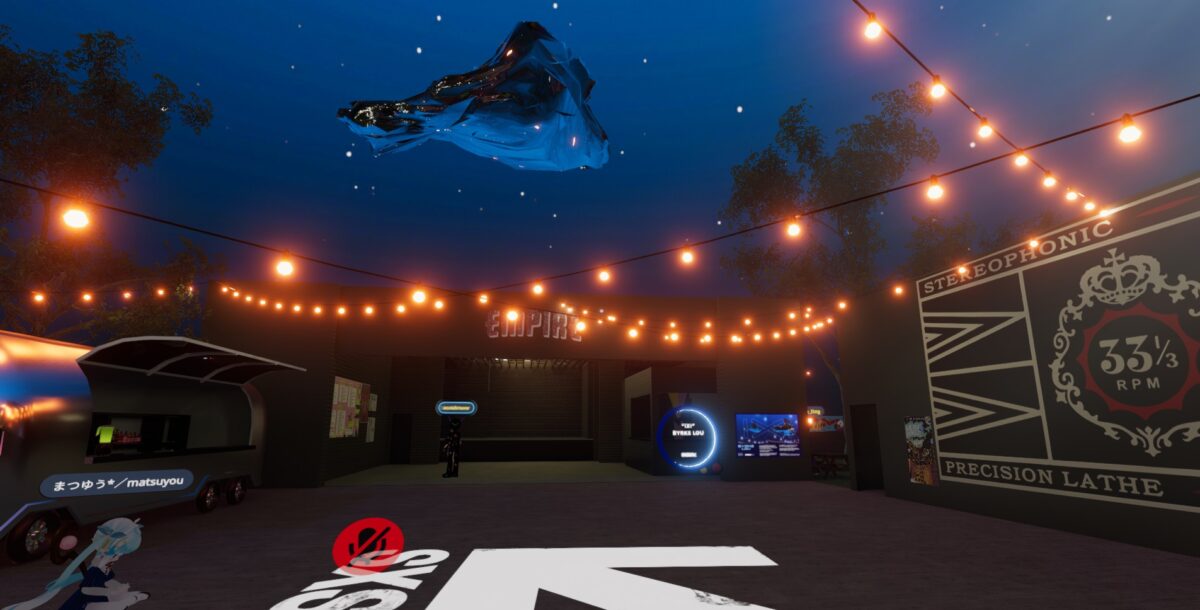 According to Kammerdiener discussions about the idea of a virtual Austin began in October of 2020, yet work on the project didn’t start in earnest until sometime between Christmas and New Year’s Day. It was initially a larger concept, but the scope was limited over time.

In order to create the world, they collaborated with Louis Cacciuttolo and his company VRrOOm. Kammerdiener already knew Cacciuttolo and had been looking for a chance to work together. VRrOOm was provided with basic concepts and blueprints as well as videos and reference images. Kammerdiener explains that “They really worked a lot of magic to make it all happen.”

Art direction was provided by Vincent Masson. His aesthetic ended up being an excellent match for this year’s SXSW. The overall look and feel of SXSW 2021 includes a variety of simple graphics of eyes and geometric shapes that meshed will with a virtual world. This theme had already been established before this particular project, so its suitability for VR was more of a happy coincidence.

To create the #SXSW virtual world, they collaborated with Louis Cacciuttolo and his company @_VRrOOm_ Click To Tweet

The world of virtual Austin exists within VRChat, an online, virtual reality, social platform. It begins on Congress Avenue and continues with a portal to Red River Street. Kammerdiener explains that they “had to scale it down in some respect.” The Paramount, Empire Control Room, The Mohawk and Cedar Street Courtyard are all venues that you can explore in the virtual world. This world also contains the Texas State Capitol building and the river.

Kammerdiener describes some of the other ideas the team had chosen to include, “Austin has these things called ‘moontowers’ which are these extra-large, big, lights that go up super high and have six or seven lights around them and they’re famous from Richard Linklater’s Dazed and Confused ‘party at the moontower.’ And so we threw a moontower in there, over there by the capital in the corner, and it’s a real scale model of the moon tower.” Kammerdiener would have liked to include some other iconic, Austin, details as well, “We talked about bats. Don’t think we didn’t talk about bats, at the very least.”

Another exciting feature, according to Kammerdiener, is the virtual concert that happens on demand at the Empire Control Room. If you travel to the virtual Empire, you can press a button and summon a tuba player. That player is Theon Cross, a British tuba player and composer. They did a motion capture recording of him performing at the legendary Abbey Road Studios in London and put that performance into the SXSW Online XR experience. Kammerdiener is very enthusiastic about this particular element of the virtual world.

One of the most fun things to do, from Kammerdiener’s perspective is go to virtual parties and meetups. These events occur at the virtual venues at specified times. At these events, you and your avatar can hang out and interact directly with other people’s avatars. These events included an XR developers meetup, a DJ at the Paramount, an avatar costume contest, and a virtual axe-throwing contest at The Mohawk. Kammerdiener said that the events created a different level of connection and simulated some of the real feelings of being at a SXSW event. He enjoyed attending the events then hanging out in the virtual spaces afterwards with fellow attendees.

Kammerdiener felt like these meetups really did help fill some of the missing spaces in a virtual SXSW experience. He explains that “from the very beginning, one of the biggest, most important, things that everybody agreed upon” is the importance of creating networking opportunities and interactions between attendees. These experiences are “the bread and butter of SXSW” because they bring in “creatives from all walks of life,” including the entertainment industries and technology sectors. The creative, who normally might not meet, have the chance to interact together in the same space. 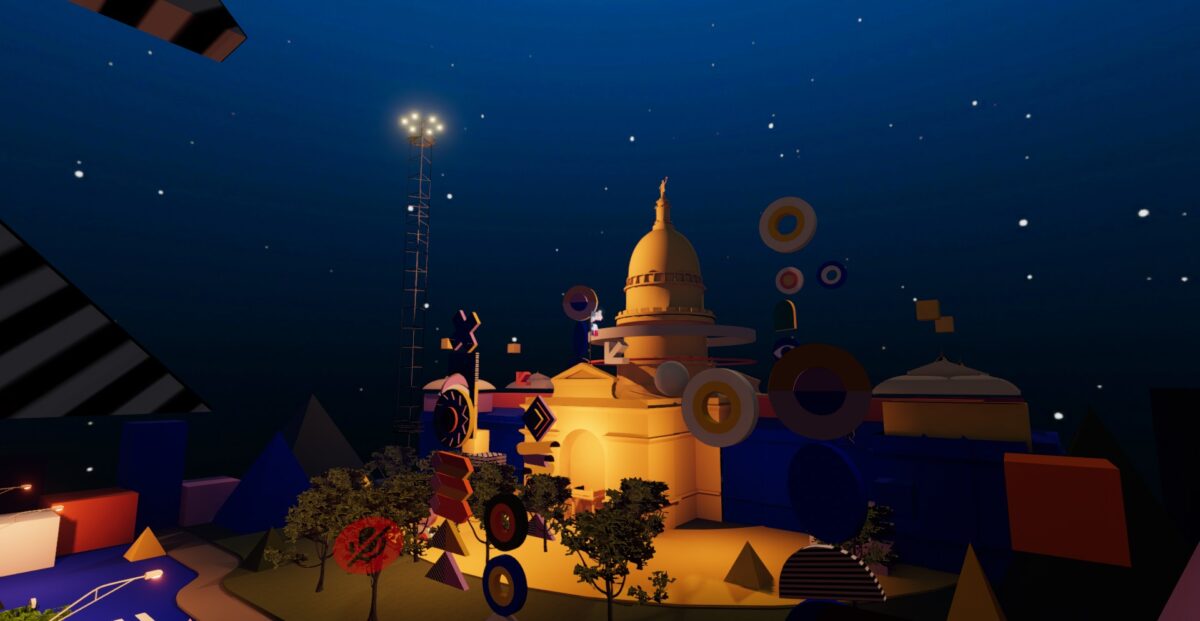 After speaking with Kammerdiener, I did some further exploration in the world of virtual Austin. The worlds are only available to PCVR, Oculus Quest and Windows PC users. I used a PC, without a VR headset. As a result, my experience did not contain the full range of 3D imagery available and I had less mobility for my avatar. However, using a mouse and the “W, A, S, D” keys (forwards, left, backwards, right), I was able to explore a nice range of the world map.

The world begins at Congress. From there, you can either walk or you can grab onto a drone. The drones carry you across the map from a great height so you can quickly move from one space to the other. Without a VR headset, I don’t have as much control, but I am able to traverse the world anyway. 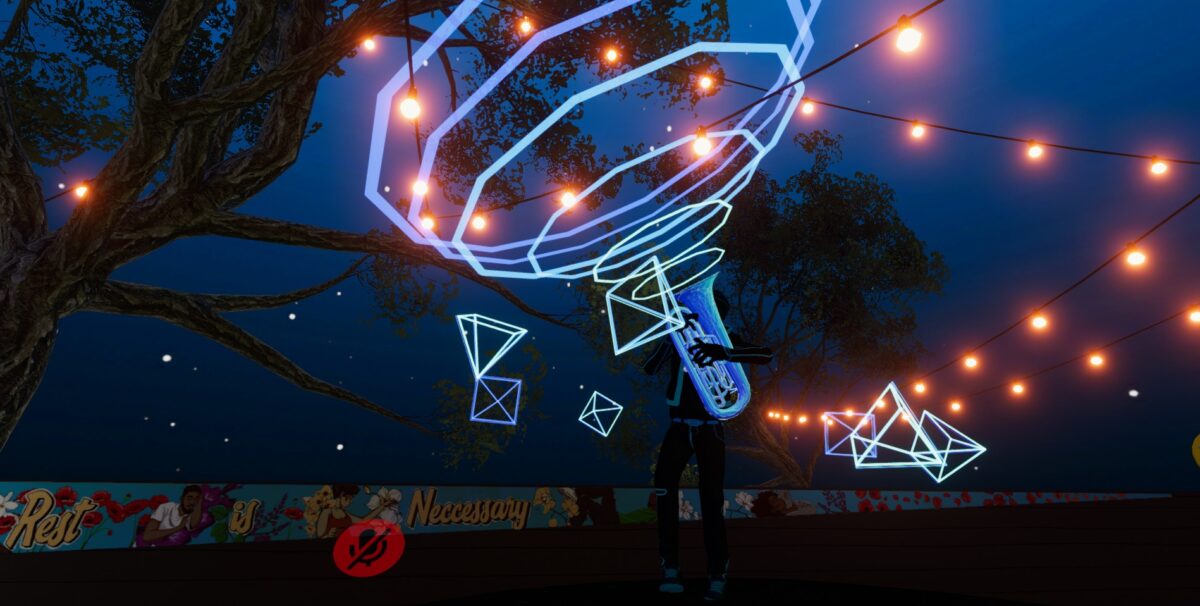 The world of Congress Ave looks a great deal like a simplified 3D rendered cartoon of Austin with a geometric aesthetic. Quiet, pleasant, music plays in the background. Simple eye shapes hover at various points and rotate slowly. At night, you can see very bright stars in the virtual sky. I wander to the Texas State Capitol building and see the famous moontower nearby.

The SXSW Closing Party is happening at The Empire Control Room, so I decide to navigate to that destination. In order to move to the other worlds, you have to find a portal. The portals are large circles labeled with their destination. I walk down the empty street, north towards the Texas State Capitol building and find a portal that leads to “Red River Street.”

On Red River Street are more buildings. There are carts you can ride in if you want to move faster. The Empire Control Room is labeled and you walk through that portal to enter the virtual venue. The venue is a fairly accurate representation of Empire Control Room, complete with a stage, gig posters and a food truck parked in the yard.

The venue is surprisingly crowded with outlandish avatar characters. A great number of people have decided to become cats for some reason. There are robots and aliens and jalapeno peppers. As I walk through, I can hear snippets of other people’s conversations. The spatial audio gives an accuracy that allows me to tell where the speaking avatars are located.

Some people are making their avatars dance or hug or do other, more advanced, movements. I can see the gestures that accompany people’s expressions in conversations. The conversations include a variety of topics, but many of them are reflecting on the experience of a virtual social event. People chat and exchange contact information. Social interactions are happening here. 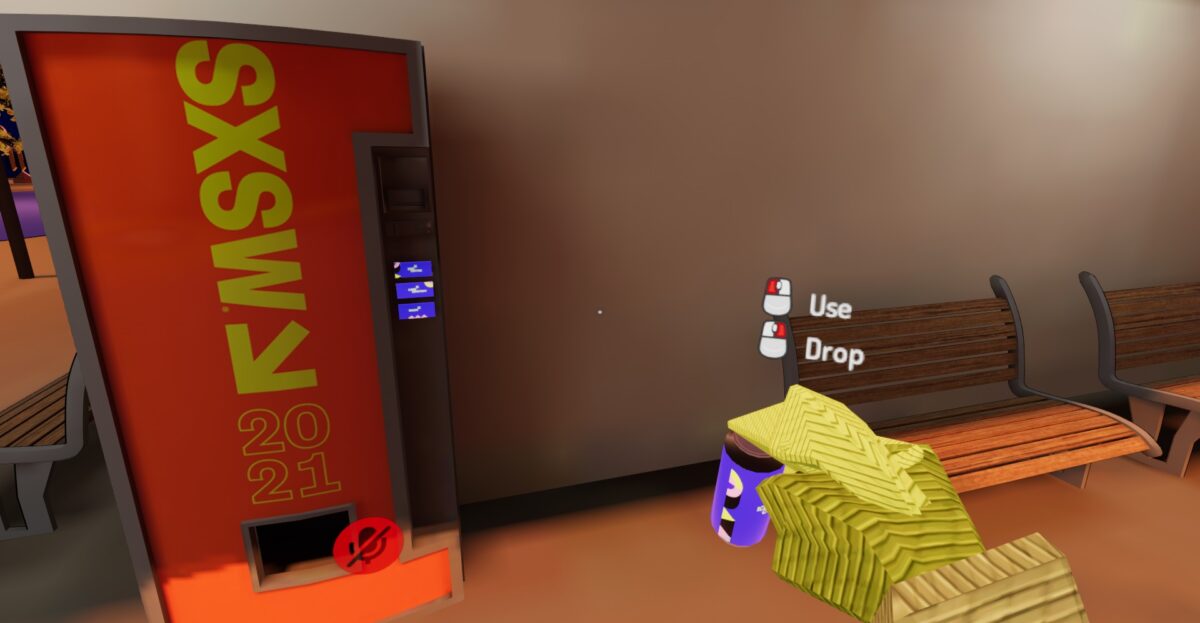 I go to the courtyard of the venue. It is replicated with some accuracy as well. There are benches and decorative lights. I find the pedestal sculpture that hosts Theon Cross. I summon him with the press of a button. A glowing figure rises from the pedestal to play a beautiful bit of jazz as light and animated details flow around him.

As the night goes on, avatars disappear one by one. The few that remain are some of the most enthusiastic people and also people who are involved with the event. It is an interesting and strange experience. I leave with the faintest feeling that I have actually been somewhere. SXSW Online XR is a pleasant experience that adds a layer of immersion and interactivity to this year’s online conference.