Tech Trends looks at how Google Earth VR for the HTC Vive fits into the company’s broader Virtual Reality strategy.

The key question for 2017 will certainly be whether Daydream can deliver on the promise of taking mobile VR to the next level, allowing people to experience something closer to the immersiveness of HMDs like the Vive without the prohibitive price tag or the need to be tethered by cables to cumbersome computers. 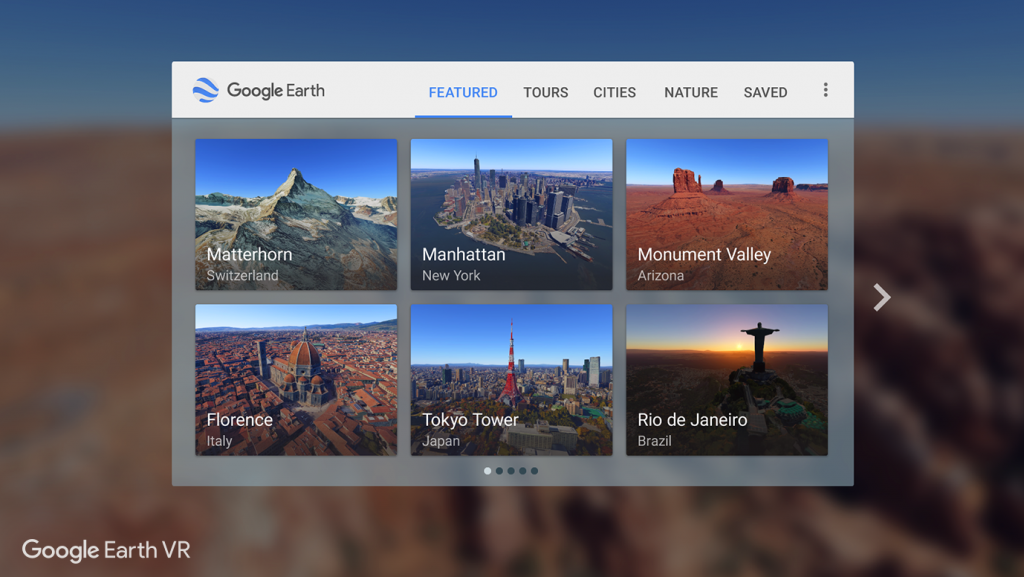 Earlier this year I was treated to my best-ever VR experience when I visited the Virtual Human Interaction Lab at Stanford.  I put on a HTC Vive, and by moving my arms in certain ways I got to free-fly around a computer-generated city, just like Superman (or woman).

Although it was just a demo and the graphics were nothing that special, I felt I could have explored that virtual city forever, regardless of the fact I am actually afraid of heights. When I finally did – reluctantly – remove my HMD and got back to reality, I told the researcher they really needed to make that into a game. I, for one, would buy it at a high price.

But now Google has just gone and done it, only a whole lot better, and for free.

When Google Earth VR was recently unveiled, you could feel a huge piece of the Virtual Reality puzzle finally clicking into place. It’s as if Google Earth – a product the company has been painstakingly building and improving for over a decade – had only been waiting for Virtual Reality to fulfill its true promise.

And what a promise that is.

Although it was just a demo and the graphics were nothing that special, I felt I could have explored that virtual city forever Click To Tweet

The Google app, which is available for free on Steam gives you that same God-like power I experienced at my superhero demo at Stanford. You start off by seeing the Earth from space, and can zoom in anywhere you like. It will be a familiar interface for anybody who’s used Google Earth before, but of course, now you’re flying, and that really does make all the difference in the world.

The juxtaposition of using real places, but giving you the freedom to interact with them on your own terms (terms which are utterly impossible in real life) is both utterly thrilling and elegantly simple.

The juxtaposition of using real places and giving you the freedom to interact with them on your own terms is utterly thrilling and elegantly simple. Click To Tweet

Apart from the sheer fun factor, there are many exciting future applications for this technology in allowing users to use those environments as canvases for their own guided experiences.

One example is Google’s own Expeditions – which uses Maps panoramas and work on Cardboard devices – which have been used by over a million kids worldwide in the first year since it launched as a pilot program (both Expeditions and Google Earth VR actually started out as 20 percent projects, where Googlers are free to pursue side projects and interests that further the overall company goals). Eventually Google would like to enable users to create their own Expeditions using such content, says Jennifer Holland, Google Apps for Education Program Manager.

Before that can be done, however, there are still technical issues that need to be addressed, as she explains:

Not all Street View/Earth content is great as some of them have stitching artifacts, which can really takeaway from the experience. That said, we know that being able to create your own Expedition would be really powerful.

Those technical details – such as improving the resolution when you get right up-close to objects – will surely be addressed in the months and years to come, but what is already there is certainly enough to warrant some excitement.

Mike Podwal from the Google Earth VR team says that currently 54 percent of the planet’s land mass is covered by this experience, including 175 cities with full 3D data. The idea of having all those virtual-real worlds to explore is simply mind-blowing, and it’s difficult not to see this actively feeding into Google’s VR strategy.

What will be really interesting to see in 2017 is how exactly Daydream ends up fitting into that overall picture. There is a distinct feeling in the air that Google is moving several elements into place in preparation to stake a dominant position in the VR market.

Currently 54 percent of the planet’s land mass is covered by this experience, including 175 cities with full 3D data Click To Tweet

What began with the introduction of millions of new users to Virtual Reality through Google Carboard will now be consolidated by this alluring offer of an absolutely unrivaled treasure trove of content and worlds ready to be explored and built upon.

If Daydream manages to enable high-level affordable mobile VR experiences that bridge the hardware and experiential gap between the low-end cardboard and the tethered immersiveness  of the Vive, it could very well be checkmate.