Tech Trends went along to Facebook’s Christmas Event in London to try out the best Virtual Reality games and applications for the Oculus Rift. 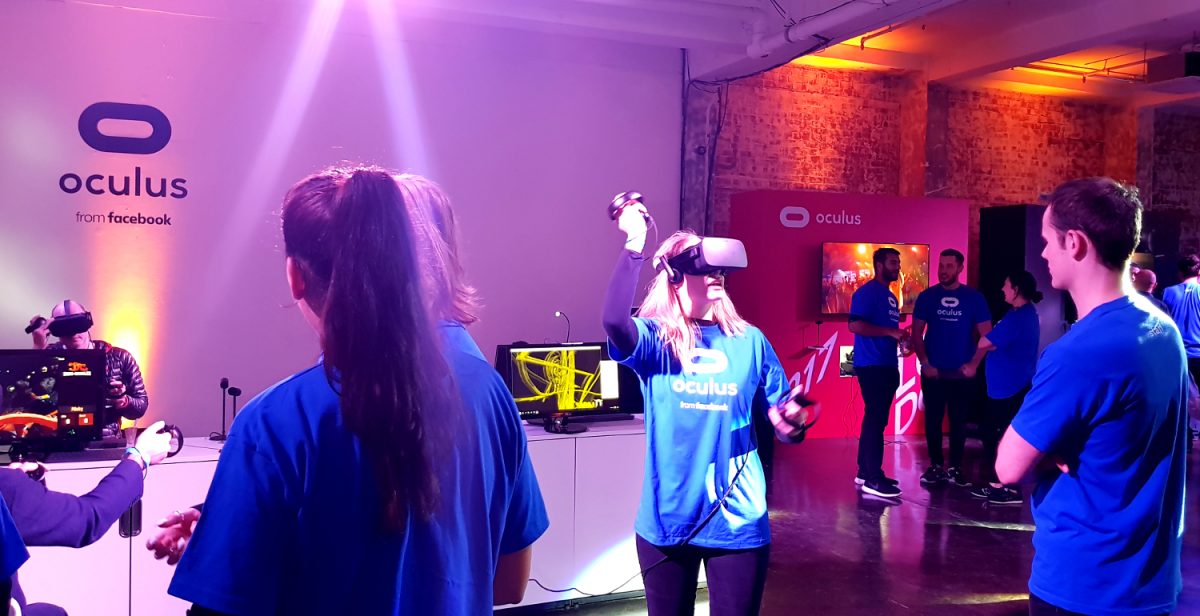 We were invited to an exclusive London event where we got into the festive mood by demoing a range of fun virtual reality content for the Oculus platform. 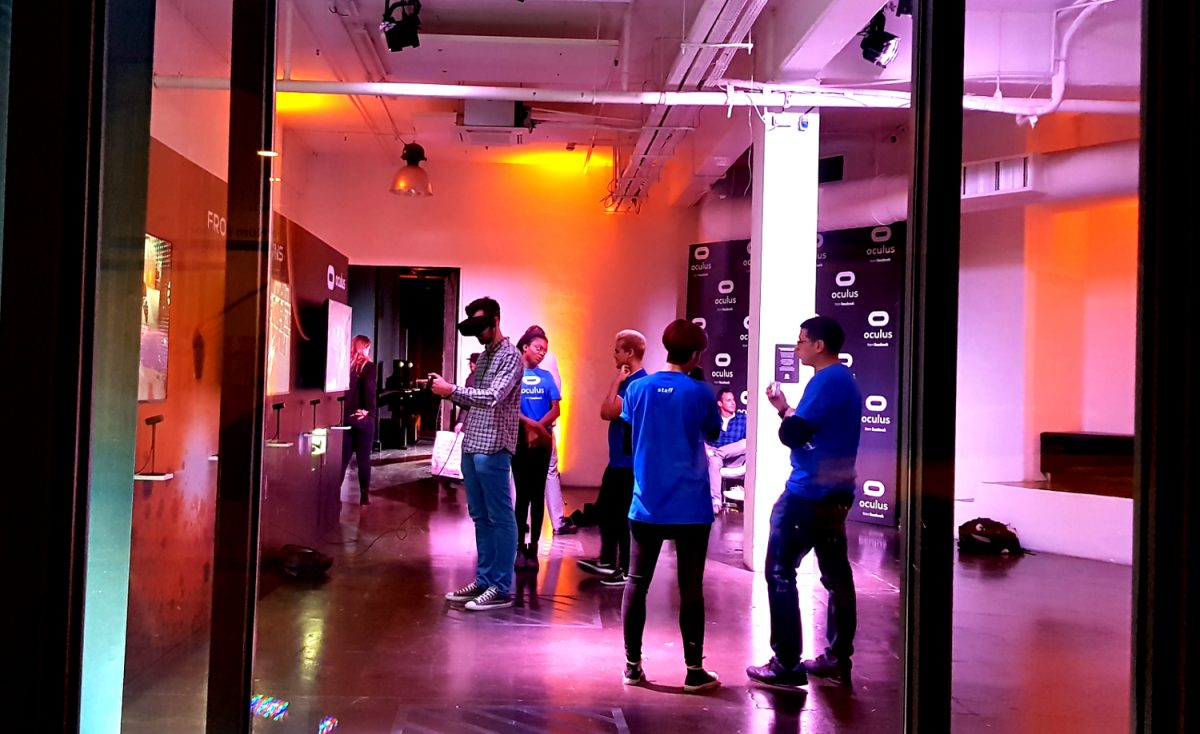 Some of the experiences like Fantastic Beasts I had already tried on other platforms (in this case the Google Daydream) but still good fun. I stand by the fact that casting spells is one of the greatest and most natural applications of VR. It just feels right, and downright wizardly… 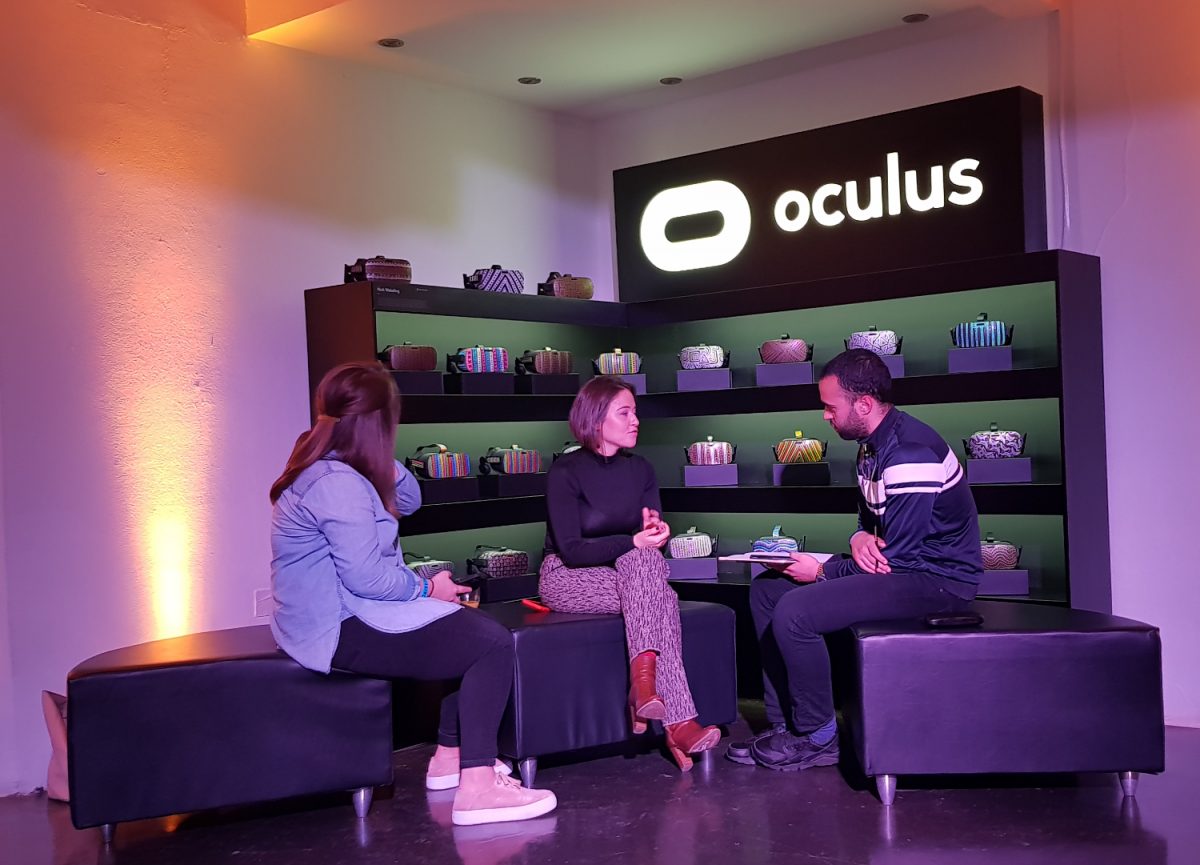 The other highlight of my visit has to be getting exclusive access to a demo of the Marvel Powers United game, where you get to play The Hulk (SMASH!).

It was very hard not to get entirely carried away with the whole smashing thing, and every once in a while I could feel the attentive minder steering me gently back to my space to stop me from punching a nearby player in the face. 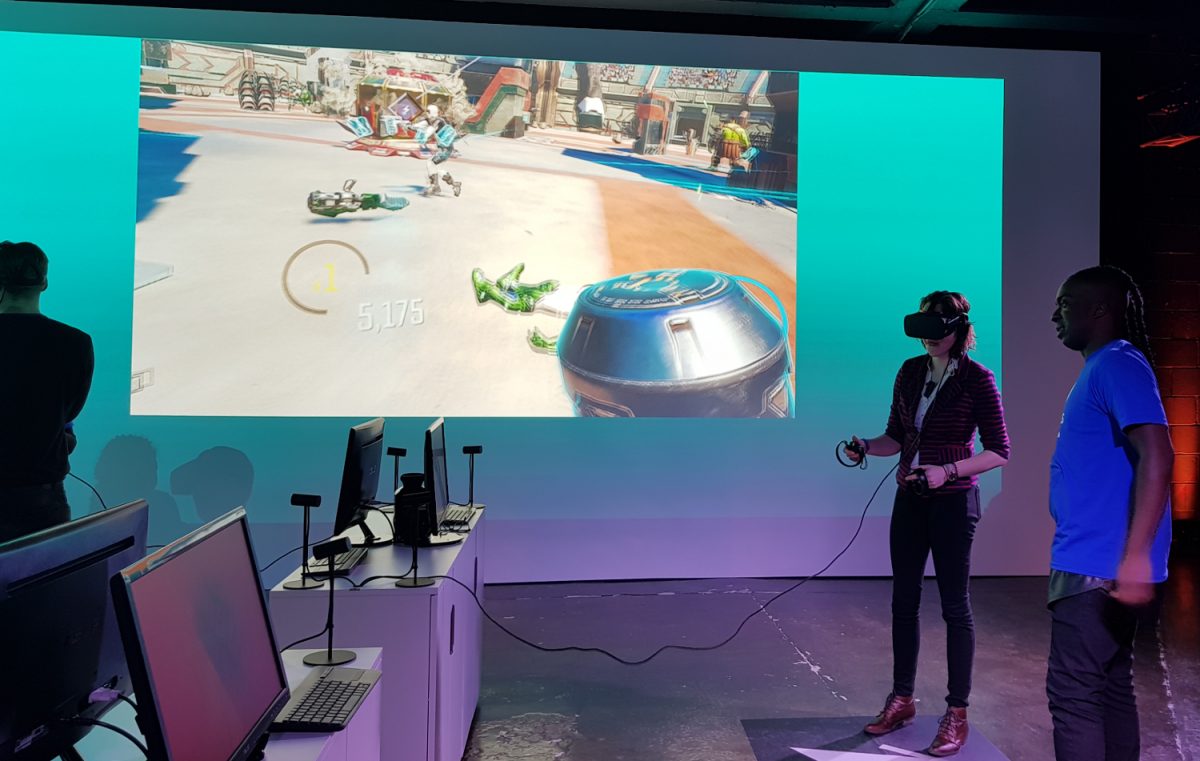 The only downside was that the gliding motion made me feel rather queasy, but I am prone to it (which makes my job endlessly interesting).

Whatever marks were lost to the sudden urge to throw up, however, were set off by the fact that the game boasts a (sadly unplayable) character that looks just like my dog Watson. I mean, it’s downright uncanny, and of course I spent a large amount of game time just trying to pet it with my huge green hands… 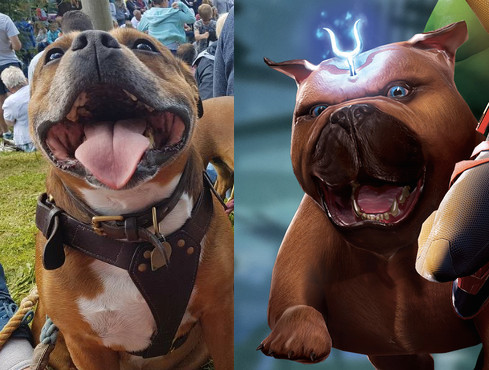 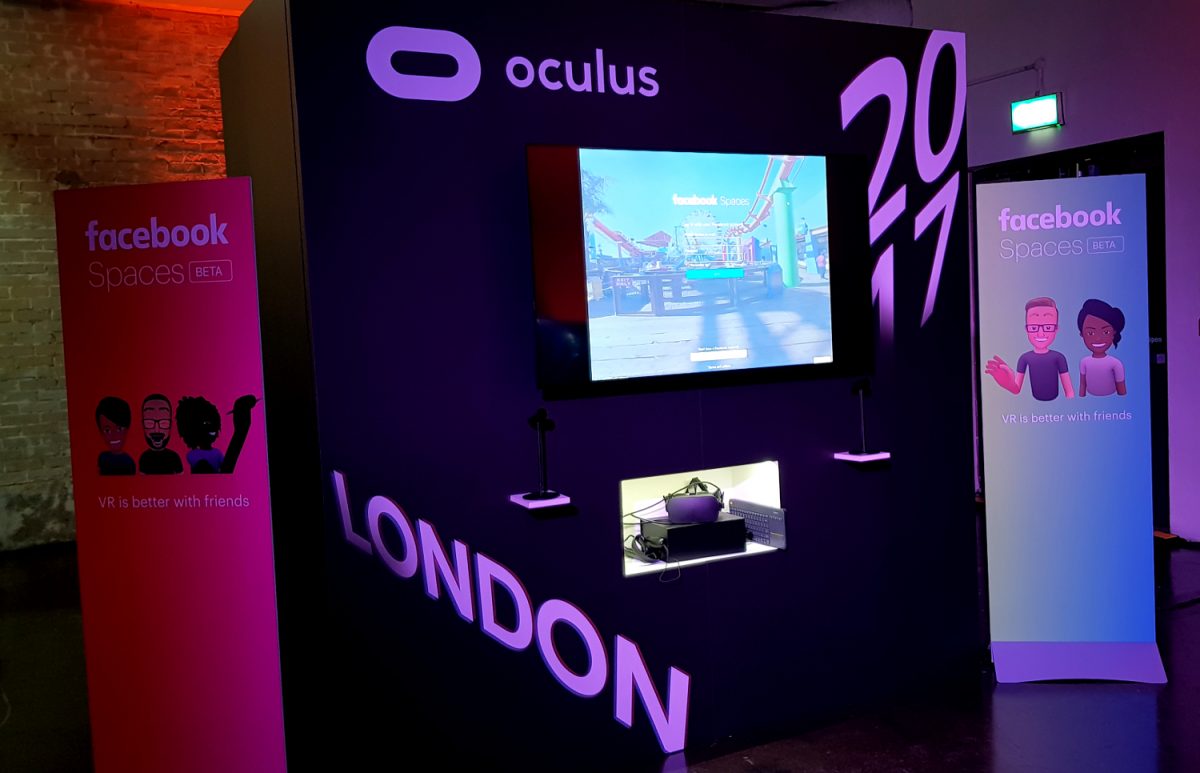 Spaces is still very much in Beta, so I try not to hold the cartoony look of the avatars, grainy resolution of some of the environments, and various glitches against it. Like a lot of emerging tech, you sometimes have to use your imagination a bit, and I am most of all excited about the potential for how it could develop in future. 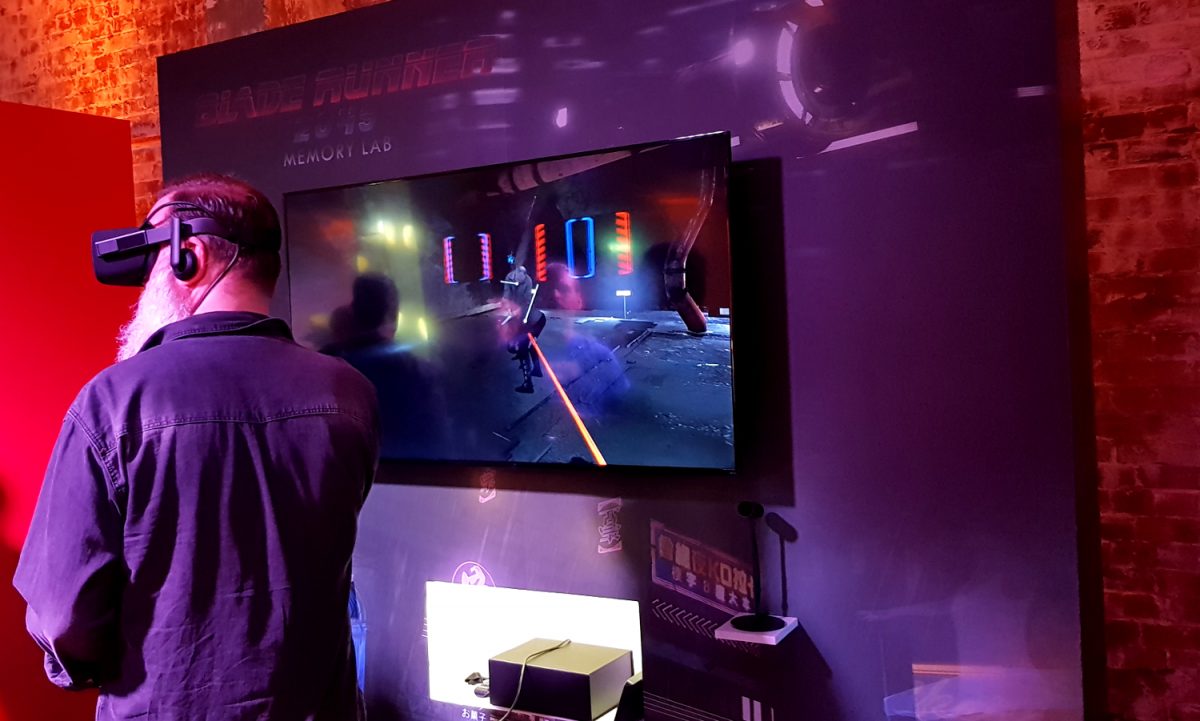 The seeds are all there, such as the idea of creating environments that you can invite your friends to and where you can hang out together, or making live video calls using animated avatars (I surprised my husband by springing that one on him during my demo).

When I finally caught a fish, I was so excited I promptly dropped it Click To Tweet 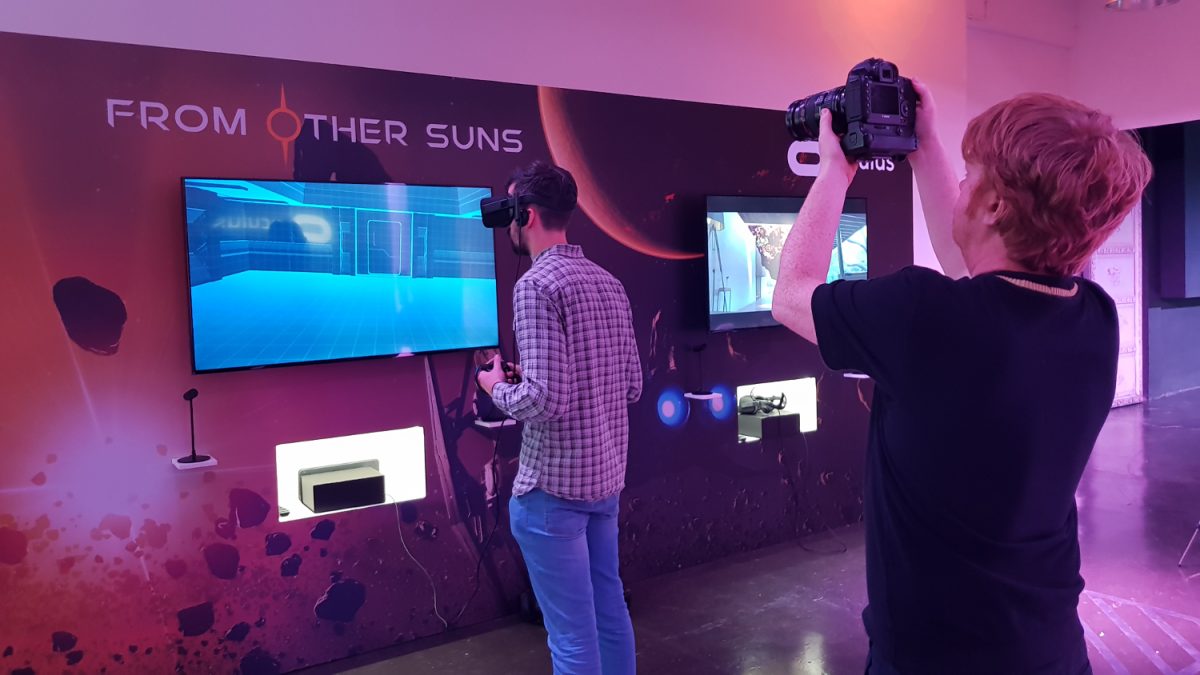 Often it turns out that the simplest actions are the most pleasing in a VR experience, and with Facebook Spaces it was no different. The best thing for me was the way that the movement of my projected hands felt rather natural, and I was able to high-five my guide – triggering an emoji explosion – grab and use objects such as a pen, fishing rod or selfie stick (which I used to take the picture below) just as I would in real life. 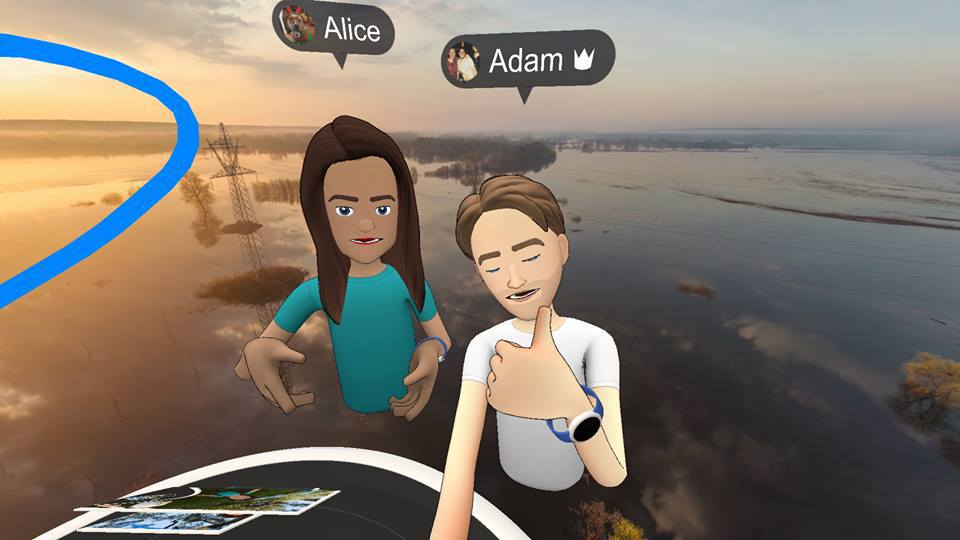 And speaking of fishing, the prize for most fun I’ve had in VR for a while definitely belongs to Bait!

This is the result of a collaboration between Facebook Spaces and their first developer partner Resolution Games and it does what it says on the tin. Grab a fishing rod, throw your bait in the water, and wait for an adorable array of fish to bite. Even though I absolutely sucked at it – while my Facebook guide pulled in catch after catch, my line broke the first time, and when I finally managed to catch something, I got so excited I promptly dropped my fish – the physics worked so well it was immensely satisfying. I could definitely see this becoming a thing.

The prize for most fun I’ve had in VR for a while definitely belongs to Bait! Click To Tweet

Some of the other experiences showcased included:

A visceral, jetpack-fuelled VR Arcade Shooter where you fly through deadly Orbital Arenas in hostile space, facing off in extreme battles. Coming in 2018.

Join a team of up to two other players and face off against the competition in a zero-gravity clash of robotic glory as you glide, boost, and punch your way to scoring goals in a breath-taking virtual arena. Available now.

An immersive VR experience that lets you sculpt, model, paint, and create tangible objects in a VR environment. Available now.

Brought to you by Funomena’s uniquely diverse team of veteran developers (Journey, Flower, Boom Blox, The Sims 2) Luna is an interactive fable about learning by the light of unexpected mistakes. Available now.

In this single-player adventure from the world of Blade Runner 2049, you’ve been transported to the Wallace Corporation’s Memory Lab where an eager Joi-Tech model hologram is ready to scan your mind to reveal thecircumstances behind your latest retirement. Available now.

Coco VR is Pixar’s stunning debut into virtual reality: an adventure into the beautiful Disney-Pixar film, Coco, coming to theaters November 22. You can choose either a single or multi-player experience, and follow the magical alebrije into the luminous world of Coco filled with lovable characters and beautiful settings from the film. Available now.

In Killing Floor: Incursion, players must take on the role of an elite Horzine Security Forces soldier as they, along with allies, fight their way through a story driven zombie campaign using an array of weapons including pistols, shotguns, axes, and more. Available now.

Brass Tactics takes real-time-strategy to the next level by placing you in the middle of the action on a fantastic clockwork battlefield. From Hidden Path Entertainment, experience the thrill of directly moving and interacting with your clockwork creations: grab structures and place them on the battlefield and direct your units with the sweep of your hand. Coming in early 2018.

From the creators of the Metro series comes a new vision of the apocalypse. ARKTIKA.1 is a highly immersive, action-packed, first-person shooter designed exclusively for Oculus Touch. Nearly a century in the future, the world has fallen into a new ice age in the aftermath of a silent apocalypse. Only the equatorial regions remain habitable, yet pockets of humanity survive in small numbers all over the planet, hanging onto existence in the resource-rich territories to the north and south–resources that everyone wants to control… Protect the colony in the wastelands of old Russia from raiders, marauders, and horrifying creatures. Be the saviour. Available now.

Scale huge heights and feel the exhilaration of extreme free solo climbing. Explore and enjoy the view or compete for the fastest times on leaderboards with Touch or gamepad controls. Developed by Crytek and achieved with CRYENGINE™.

Grab a helmet, polish your lucky bat, lace up your kicks, and sharpen your skates as you step out of the tunnel and onto the gridiron, ballpark, hardwood, and ice as an elite athlete in VR Sports Challenge. Available now.

Take a trip into orbit and experience life on board the International Space Station! In this Emmy-nominated simulation, learn how to move and work in zero-gravity using Touch controllers. Dock a space capsule, take a spacewalk, and let real NASA astronauts guide you on the ISS through archival video clips.

An all-new single-player chapter in the world of The Unspoken. It reveals the untold story of Chicago’s secret spell-casting duels. You’ll travel through neon alleys to face down other-dimensional Demons, cross vertigo-inducing rooftops to battle large-scale Wraiths, and sneak into hidden sanctums to investigate the murder of an acolyte. You’ll cast spells with your bare hands. From a finessed flick of the wrist to a visceral push, the play style is up to you– five classes channel their energies to cast over thirty spells. You’ll levitate cars, unleash electricity, and see the future. Coming soon.

Robo Recall is an action-packed VR first-person shooter with visceral Touch gameplay and an in-depth scoring system. Earn the high score by using creative combat tactics and skill shots as you teleport through city streets and rooftops in an awe-inspiring ballet of bullets. Purchase and activate Touch to get Robo Recall for free! Available now.

Return to the world of Windlands, alone or with friends. Armed with grappling hooks and a bow, embark on a journey to destroy the gigantic titans and save the world from an ancient danger. Coming soon.

From the creators of Game Informer’s 2016 VR Game of the Year, Chronos, From Other Suns is an action-packed co-op VR space adventure designed from the ground up for the Oculus Touch. Available now.

From Emmy-Award Winning Oculus Story Studio comes Dear Angelica, a journey through the magical and dreamlike ways we remember our loved ones. Entirely painted by hand inside of VR, Dear Angelica plays out in a series of memories that unfold around you. An immersive, illustrative short story starring Geena Davis and Mae Whitman.

In 2026, the world is rapidly deteriorating due to climate change. Anaaya, a brilliant Inuit female scientist, is appointed to find a planet that humans can inhabit, and she’s joined by Melita, an advanced A.I sent to help her on the task. Together, they will embark on a journey against time to save humanity from extinction. We are exploring new ways to interact with a linear story, having two possible camera views. Available now.

The People’s House takes you on a historic visit to President Barack Obama and First Lady Michelle Obama’s White House. Through the transportive power of VR, the Obamas take you on an intimate journey inside the West Wing, Executive and Private Residences, reflecting on their time there, and recounting the building’s profound history since its creation over two centuries ago. Available now.

Step to the Line

In this VR short documentary shot in prison, we see how the release from incarceration can be just as jarring as the intake and how parallel lives diverge when someone serves time. Step to the Line has been selected for the 2017 Tribeca Film Festival. Available now.

Just another day in Hawkins, Indiana. October 31st. Getting ready to hand out candy. What could happen, in such an idyllic town? Certainly there’s no chance of you getting sucked into the Upside Down, fighting off Demogorgons, and desperately trying to get back to the real world. There’s a very slim chance you’ll make it through the night! Available now.