Raindance is a very well-established and well-respected independent film festival, but it isn’t a particularly flashy one. Yet that lack of over-the-top glamour actually suits it very well. There’s a certain tongue-in-cheek, down-to-earth British vibe here (right down to its playfully deprecating name) that makes it feel really accessible, so that people can feel comfortable coming in and discovering content they wouldn’t have come across otherwise.

Raindance is a very well-established and well-respected independent film festival, but it isn’t a particularly flashy one Click To Tweet

And that’s also one of the reasons why VR pieces suit it so well. The festival does a great job of making this all about the stories, and the technology takes a back seat. Just like people in a movie theater aren’t constantly marveling at how a projector works, punters who actually paid to experience the whopping 9 hours of VR content at the festival were after new stories and new experiences. And they got those in spades.

The other reason why this year’s festival has been such a success on the VR front is down to the tireless work of its curator Mária Rakušanová, who has managed to scale this year’s VR showcase in a really impressive way. Whereas last year’s setup still felt a bit like a tag-on, the 2018 edition received well over 500 submissions from all over the world, from which they shortlisted 33. In the space of a year, Rakušanová also found that the quality bar had been considerably raised across the board, which was reflected in the fact that the Raindance Gallery of Immersive Stories and Interactive Worlds was entirely sold out over the 3 days when it was open.

Just like people in a movie theater aren’t constantly marveling at how a projector works, punters who actually paid to experience the whopping 9 hours of VR content at the festival were after new stories Click To Tweet

Below are some of the highlights from the Gallery, including various VR category winners for the Raindance awards (3 new categories were also introduced for the first time this year) some of which we’ve previously covered, such as the BBC project Nothing To Be Written which won Best UK experience and 7 Miracles which bagged the Spirit of Raindance: VR Film Of The Festival gong.

Transference, which was co-directed by Elijah Wood and produced by his company SpectreVision, was the winner of Best Interactive Narrative Experience award. It’s a psychological thriller placing you face-to-face with a fractured family as you delve into their minds. As you navigate a home filled with secrets you need to collect evidence of the family’s history in order to find out how you can help repair their lives. 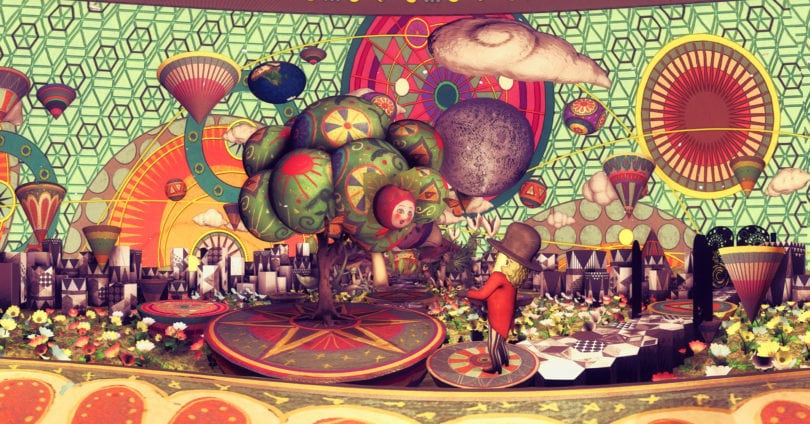 The Apple is a Chinese, Japanese and Korean co-production which won Best Multi-Person Experience award at Raindance Click To Tweet

The Apple is a Chinese, Japanese and Korean co-production which won Best Multi-Person Experience award at Raindance . This is a room-scale (50m2) multi-person VR experience for up to 4 people. You don a Vive Pro headset, equipped with leap-motion sensors for hand tracking, and are also able to communicate with your partner via voice. Together you journey through various stages of life entering new fantasy worlds. Here and there you’re guided by a cute cat that appears out of nowhere and disappears when you jointly arrive to a new destination. Each life stage is represented by distinctive styles of movement that are a metaphor for the human journey from beginning to end.

“The experience has references to Adam and Eve in the Garden of Eden, Newton and Gravity (you move up and down various platforms to enter new worlds), and the lead character, The Philosopher, resembles Steve Jobs,” explains Rakušanová, who said it was one of their most popular experiences. “Audience members intuitively held hands during the entire experience, and freely walked around the space.”

My Africa allows you to become an elephant keeper and care for Dudu, an orphaned baby elephant, nursing her back to health. Click To Tweet

My Africa is a project by Conservation International to educate audiences about Reteti, a community run Elephant Sanctuary in Kenya, working to save elephants, reknitting an ancient coexistence between people and wildlife. The VR experience consists of two elements. The first is a 360 film, shot by British cinematographer Chris Campkin, who literally had to battle lions running off with his camera rig during the shoot, as this video shows. The room-scale interactive VR experience created Elliott Round, on the other hand, allows you to become an elephant keeper and care for Dudu, an orphaned baby elephant, nursing her back to health. Dudu was created from thousands of photographs and detailed CGI to look incredibly real. Rakušanová says the experience proved extremely popular with kids and adults alike at the festival, and rates it as the most engaging VR for Social Impact experience she’s seen in 2018. 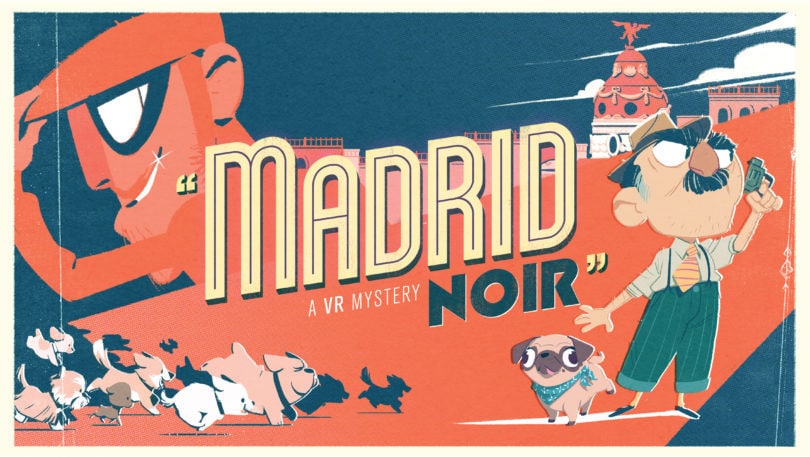 Madrid Noir (winner of Discovery Award: Best Debut Experience that recognises first-time VR creators) A beautifully animated, fun and playful VR short in which you encounter Manolo, a detective from Madrid, who falls in love with Paquita, an almost painfully cute pug puppy that Rakušanová swears behaves more like a pug than real-life pugs (I have a feeling that she might have a thing for pugs, but then that’s hardly unusual, hence the popularity of the experience).

Madrid Noir is a beautifully animated and playful VR short where you encounter Manolo, a detective from Madrid, who falls in love with a pugpy Click To Tweet

Hotel Zentai This is another piece that explores what can be done with longer-form VR content. Clocking in at 40 minutes long, this 360 film is a surprising mix of comedy and sensuality. For those not familiar with it, Zentai is the practice of having sex without actually having sex – by wearing full body suits while rubbing and hugging one another. The film takes place in the eponymous hotel based in Santiago De Chile, and through music and dance tells four intertwining stories: a mother and daughter recognise each other in a ritual, a man can’t decide what to wear, a coach loses his authority, and two lovers never see each other’s faces. Ambitious and intriguing, this really shows how VR enables people to tell different stories in a different way. Well worth checking out.

Inside Tumumaque is A room-scale animated VR documentary featuring Tumucumaque, the largest rainforest preserve in north-eastern Brazil You switch between a third-person POV and first-person through the eyes of five different animals: a poison dart frog, a black caiman, an eagle, a tarantula, and a vampire bat. When you’re embodying each animal, their perceptions are interpreted as sensory experiences using a huge range of tools such as ultraviolet colour spectra, movements in super-slow motion, visualizations of echo sounder tracking and colour night-vision as well as spatial 3D sound. There has clearly been a huge amount of work and care poured into this, and Rakušanová tells me that the team at the Interactive Media Foundation meticulously recreated over 2000 plants in CG, developing the models, textures and animations of plants in collaboration with scientists from the Berlin Museum of Natural History. The binaural sound design incorporates original sounds which were recorded on site and atmospheric acoustics developed with original animal voices to create an authentic spatial sound impression of the Amazon region.

Best Documentary Experience  went to Grenfell, Our Home combines witness testimonials from the London Grenfell Tower fire (filmed in 360) with computer-generated animation to offer a view not only of how the fire affected the lives of those survivors, but also of the vibrant community that existed there before the tragedy, something that can now only be experienced through this type of virtual reconstruction. It opens up some interesting possibilities around the power of VR pieces to help address trauma and repair communities.

Awake: Episode One also won a Special Jury Mention for Best Interactive Narrative Experience, telling the story of Harry, a prisoner in his own house and lost in his mind, obsessed with discovering the truth behind a recurring dream of his departed wife.

But if there were a prize for best-named experience, surely it would have to go to the piece named The Evolution of Testicles which in fact won the Best Social Impact Experience category. Produced for the Male Cancer Awareness Campaign, this is part of the Oculus VR for Good Creators Lab, where filmmakers are paired with nonprofits to make great VR in the name of social good. As the name suggests, the experience aims to raise awareness about testicular cancer, but does so through the medium of laughter, brilliantly delivered by one of my favorite comedians, Chris O’Dowd, who can pretty much make any topic sound hilarious. O’Dowd commented after the win that the social impact of the medium was very important, but also marveled at the fact that, in his words, “we’ve won for a film about men checking their balls!”

It’s a brave and exciting new world for VR content. Can’t wait for next year.