Every nation has its quirks, and the U.S. has more than its fair share, but what stands out the most to me – as a tech journalist who recently made the move across the pond – is that in many ways, the nation of Silicon Valley is still stuck in the 90s.

Take cheques (or checks as you Yankees would call them) for example. In England it had been years since I’d last seen one of those things, much less written one. Up until five years ago our in-laws might have used them to give us Christmas or birthday money, but even they switched to Internet banking and just transferred the “green gifts” over to our account when they were feeling in a generous mood.

In many ways, the nation that gave us Silicon Valley is still stuck in the 90s Click To Tweet

But in the U.S. it quickly became apparent that these things were very much still in vogue. A paycheck is, quite literally, a pay check. And if you’re paying for something, the logical thing to do is write out one of these things, address an envelope, put a stamp on it, and trust that it will arrive at its destination between 3 and 30 days, at which point, if it hasn’t, you’ll need to repeat the steps above.

What tickles me the most, though, is that I have quite a nifty little banking app on my smartphone. And that app is really capable of doing all the things you would expect of such an app, such as moving money around without ever having to put pen to paper. Does it have that facility though? Not really.

What it does let me do is pay in my checks via the app. Yes. Once I receive my paper check from the pony express delivery, and sign the back of it with my ink pen, I can finally use my app to take a photo of both sides and pay it into my account. Huzzah!

And at that point, I will then likely have to find an ATM (or actually go to an honest-to-God old fashioned bank counter) and pay a few bucks for the privilege of withdrawing my own money into paper cash form.

I just did a mammoth roadtrip across America, listening to audiobooks I got from my local library… On Cassette Click To Tweet

Because in the good old U.S. of A, money really does make the world go around, and people do like their cash. Sure, most places will take cards, but more often than not it’s just easier to pay cash. In England I’d go for weeks without carrying any cash at all in my wallet, mainly because everybody did contactless payment (and you don’t tend to complicate things by tipping unless you’re at a restaurant) so it took a millisecond to pay and walk out.

Once I receive my paper check from the pony express delivery, and sign the back of it with my ink pen, I can finally use my app to take a photo of both sides and pay it into my account. Huzzah! Click To Tweet

When I opened my American bank account and finally got my bank card (about three weeks later by pony express) they proudly announced that my card contained this amazing chip and pin technology… Contactless is still a bit of a science fiction thing in a lot of places as far as I can tell.

Everywhere I look there are relics of the old world order, and not in a proper vintage sort of way either. Vinyl records, that’s retro cool. DVD machines at Walmart, WTF? But then again, don’t get me started on how expensive and bad the broadband service can be depending on where you live, so maybe Netflix is not as universally accessible as it seemed to me in the UK. 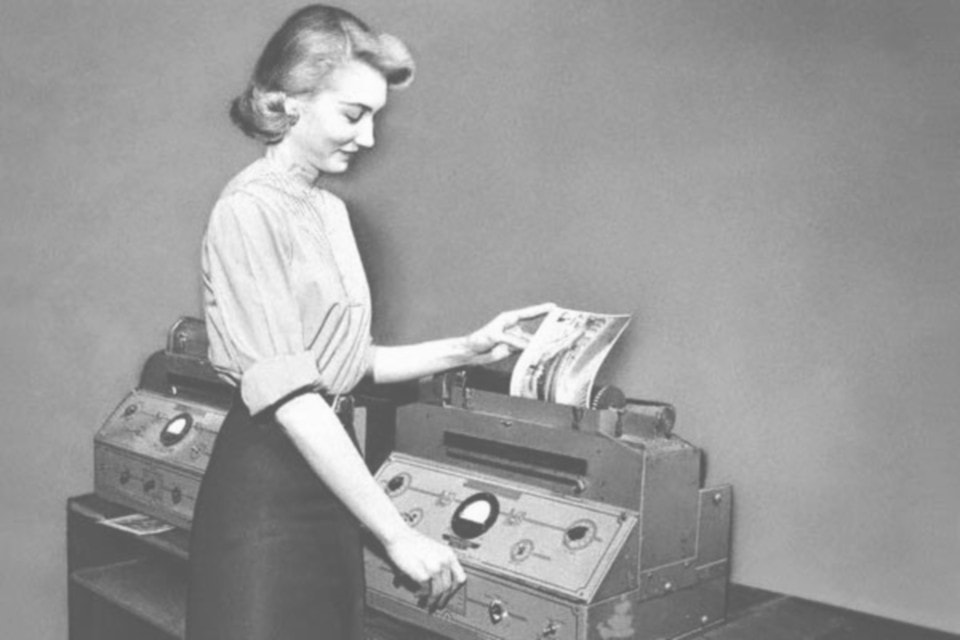 I just did a mammoth roadtrip across America, listening to audiobooks I got from my local library… On Cassette tapes. I swear that at this point I would not be surprised to be handed a file on a floppy disk.

I also get endless paper catalogs in the mail. I literally cannot think of any circumstance which would tempt me to purchase something from them as opposed to ordering from Amazon. For one, it would probably involve writing a check.

And then, for the love of God, there is the fax. The first time someone suggested I fax over a document to them I laughed out loud and waited patiently for them to join me in the joke. They didn’t. After double checking I hadn’t fallen through a wormhole and come out in 1995, I informed them I did not possess such a machine, but would be happy to send them photographic scans of said documents from my phone (I have an excellent app called Camscanner which accomplishes this brilliantly) but alas, no, for many it is a matter of fax it or mail it. Email is not considered “secure.”

I can’t help but cast my mind back to the days when I did use fax (yes, I am that old, I just choose not to live in the past most of the time) and it seems to me that people used to send their sensitive documents to the wrong number all the time, specially since what you got at the other end was just a series of bleeps rather than a confirmation of who the fax number actually belonged to. But, sure, it’s safer than email or an app… If you say so.

But they do say so. I lost count of the times over the past few months I found myself bitterly wishing I did own a damned fax machine. And I have finally learned how to fill in a check properly.

When in Rome… use contactless. But in America, be sure to carry cash.