The games giant joins VRM Consortium in Japan as an observer, but does that mean they’re closer to entering the immersive space?

As early as 2016, former Nintendo President Tatsumi Kimishima had already hinted that the company was “looking into” VR. In a later interview in 2017, that interest had been somewhat upgraded to say they were “studying” the possibility of perhaps adding a HMD accessory to the Nintendo Switch once they were convinced users could play for longer durations without experiencing issues. Yet it’s safe to say that overall Nintendo has been quite noncommittal about dipping their toes into immersive tech – at least in public.

So the recent news that the videogame giant is to join a newly formed “VRM Consortium” is likely to get some fans excited. The consortium brings together several Japanese companies, which – from February this year – will coordinate activities with the aim to develop the Virtual Reality business.

Members of the consortium, which will officially launch in February 2019, include Unity Technologies Japan, several VR development companies as well as livestreaming and distribution platforms.More specifically, however, the consortium (as the name suggests) is actually championing the VRM file format and hopes to make it an industry-wide standard for 3D avatars (or 3D Humanoid Characters to be precise).

Why is that a big deal? Because up until now, when creating such 3D models, the output depended on the modelling tools used, and varied greatly in terms of scale, expression, initial pose, and a range of other factors. For instance, when in first-person view, how do you obtain the coordinates for correct positioning of the body, which parts of the body should be excluded from view at which points, the list goes on. This makes it very labour-intensive for developers, limits user choice, and generally makes for poorer experiences. 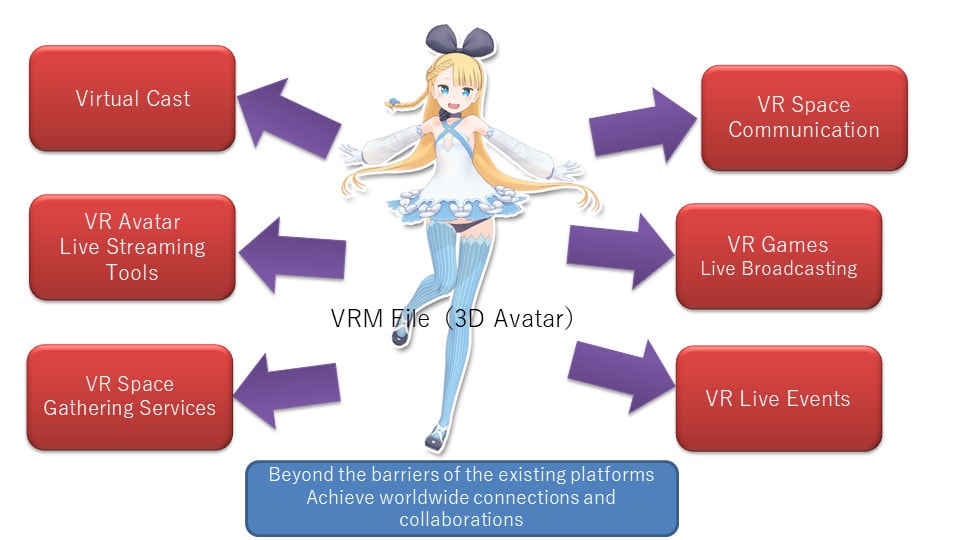 Members of the VRM consortium, which will officially launch in February 2019, include Unity Technologies Japan Click To Tweet

Each company’s datasets are different and have often-complex specifications. It is also not uncommon for the full information about file formats not to be provided with the avatar, so importing and exporting can be pretty much impossible outside of a very limited ecosystem, and therein lies the problem.

Up until now, when creating 3D models the output depended on the modelling tools used, and varied in terms of scale, expression, and a range of other factors Click To Tweet

One of the main barriers to the mass consumer adoption of social VR is the fact that at the moment, each platform pretty much requires you to start from scratch. You have to create an avatar (often with limited options for customization) and can generally only use it within the confines of that specific world.

With VRM, however, the same data can be used across any application that supports the format, meaning that users can easily create and personalize them with a broad range of tools. They can then use that same avatar across different applications and platforms, moving seamleassly from one to the other.

This is possible because the format is platform agnostic and open source, allowing developers to integrate it in whatever product or platform they like. VRM is based on the 3D standard format glTF2.0, All data including textures and materials is compacted as one file. To import a VRM model, only one single file needs to be handled, an it carries not only metadata such as the title and the author name, but also the thumbnail and the license information, making each avatar traceable and unique, so it would be possible, for example, to send your avatar data to your friends so they can see your appearance in a shared virtual space just as you intended.

If the enduring popularity of platforms such as Second Life has taught us anything, is that people can become incredibly invested in their virtual personas, and see them as a true extension of themselves, a key part of their identity.

So the idea that your avatar would be truly “yours” to take anywhere in the virtual multiverse is a really powerful one, and something that might eventually tempt doubters into not only trying VR, but coming back repeatedly and sticking around for longer when they do.

For now, however, Nintendo remains ever cautious – they are joining the consortium in an “observer” capacity only – and there are no hints of an actual VR product from the company coming out in the near future, but then, you never know with these things…