Share your world with friends through the Display.land App then build an engaging AR experience and play together from anywhere on the planet with the new Studio creation tool

The goal of hot startup Ubiquity6 is to improve interpersonal communication by enabling friends and family to easily share augmented spaces where they can meet, chat, play and have fun creating AR games and experiences claims CEO and co-founder of Ubiquity6 Anjney Midha. Last month they launched their first public Beta of their Display.land app for iOS and Android smartphones. Unlike most AR apps to date Display.land is not a single user, standalone AR experience but rather a portal or browser through which users can connect, share their world and play in AR.

“Multiplayer, cross-platform 3D, AR and VR experiences are among the most successful types of media on the planet today, from Fortnite and Roblox to Pokemon Go and Snapchat Lenses.” explained Anjney Midha, CEO and co-founder of Ubiquity6.

This concept has attracted a lot of interest and to date, Ubiquity6 has raised over $37.5 million in funding from investors including Index Ventures, First Round Capital, Google’s Gradient Ventures and KPCB. All this capital and more than two years of development mean that under the hood Display.land is doing some very clever and interesting things, check out some examples of 3D scans created by the app in the video below.

Multiplayer, cross-platform 3D, AR and VR experiences are among the most successful types of media on the planet today Click To Tweet Ubiquity6 has raised over $37.5 million in funding from investors including Index Ventures, First Round Capital, Google’s Gradient Ventures and KPCB Click To Tweet

We’ve been dogfooding and iterating on the Studio and engine to create immersive play experiences over the past two years – from our Voxel Sandbox that brought over 150 concurrent players together in one physical space in San Francisco’s SF MoMA, to the thousands of 3D captures and life-scale animated scenes that have been shared by the Display.land community since our public beta launch a month ago.

The Display.land app claims to be “the world’s fastest way to create, edit and share real-world 3D environments and assets using everyday mobile cameras,” so what does this mean exactly? Well, basically you can use the app and your phone camera to scan your real environment, be it your living room, office or favorite cafe then the app sends the data to Ubiquity6’s cloud servers where it is stored and can be shared with your friends via a simple URL.

“By building a way for creators to publish these types of experiences with unprecedented speed and ease, we are offering players a single destination for immersive experiences that brings them back everyday to play with a community of friends they can’t find anywhere else.” said Midha.

You can then use the app to both share the same 3D digital space (created via your phone) and use simple AR creation tools to create persistent, dynamic multiplayer AR experiences and generally have fun playing with each other. With over 92,000 user-created spaces from 142 countries, it’s safe to conclude that this is something people want and enjoy doing so the company have just released the next part of the puzzle.

“The Displayland app is the world’s easiest way for creators to capture and turn real world locations into assets for 3D, AR and VR experiences. The Studio is the world’s easiest way to make multiplayer 3D, AR and VR experiences using those assets that can be played within the Displayland app and any web browser. Together, they form an end-end creation and publishing experience for anyone to blend reality and imagination with the kind of speed, scale and fidelity only currently available to high end gaming, graphics and VFX professionals.” enthused Midha.

Hot on the heels of December’s app release Ubiquity6 has now announced the next step in their journey, Display.land Studio. The Studio is a serious step up from the app, offering a more advanced toolset to help you create and share complex multiplayer 3D, AR, and VR games and experiences.

“Display.land Studio is intended for anyone interested in creating and modding multiplayer 3D, AR and VR games and experiences. It is a cloud editor that offers rich player customization and level layout options that include built-in templates. All in-world textures and assets can be replaced with your own photos, videos and 3D environments and objects captured by your camera.” said Midha.

The Studio is a visual and code-optional playground for those of us who love to create and bring people together through social play. Experiences created with the studio can be entirely virtual or anchored to any real-world location precisely to a few centimeters.

Logic and gameplay features are easily changeable via lightweight scripting and custom components. Users can also create and publish shared, persistent AR games and experiences using the Studio’s built-in AR Cloud positioning service. It allows anyone to publish cross-platform, multiplayer experiences that can be shared and played instantly on mobile, desktop and head-mounted devices. No prior programming experience is required, but if you know a little bit of web development and javascript, you’re already off to the races.

For developers, Display.land Studio offers flexible APIs to the underlying 3D engine that powers all Display.land experiences, with an engine that ensures you can develop in JavaScript and uses familiar web patterns, libraries, and asset formats, without sacrificing on security or best-in-class performance across all supported platforms: AR, VR, Mobile, and Web.

Where the app gives you the tools to scan a 3D model of your real-life environment and share it the Display.land Studio now gives you the tools to build more advanced, sharable and interactive AR experience and blend them with your 3D location models. The results will also be sharable beyond the app and accessible across platforms including VR, Mobile, and Web.

We’ve also taken care of many of the difficulties in building engaging, cross-platform, real-world experiences. With plug and play multiplayer networking, persistence, cross-platform input handling, integration with our AR Cloud service, and more, our engine has been built to allow you to focus on what makes your experience unique – your creativity. 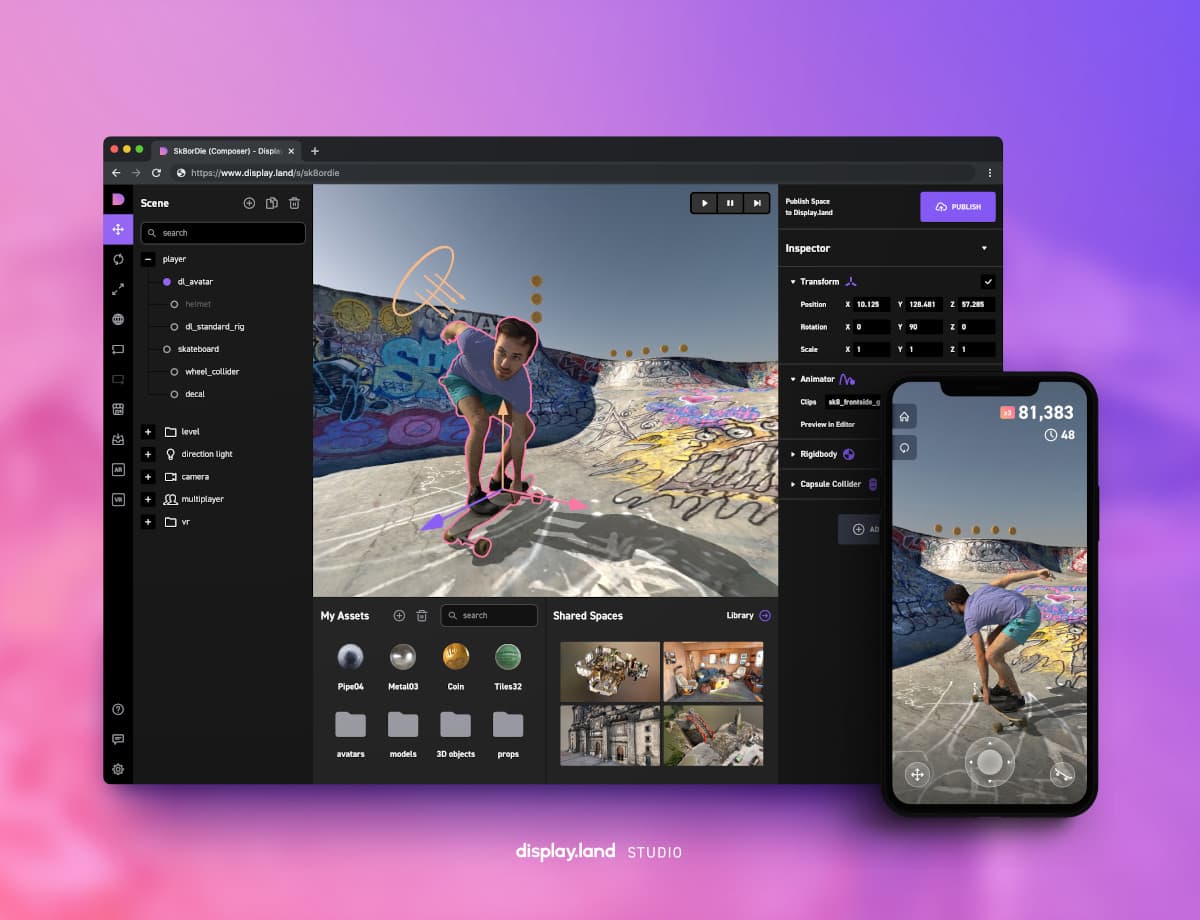 If the goal behind all this was to create a better, more interactive way for friends and families to keep in touch and communicate more effectively, sharing more of the world around them and playing together then I think you can say Ubiquity6 has succeeded. The app is simple to use for the less tech savy and now the Studio offers more skilled creators a way to build advanced and engaging AR experiences that all users can access. Remember, we are still in the very early stages of immersive tech and are a long way from the day our lives are truly enhanced and augmented but Tech Trends is watching Ubiquity6 with keen interest. If consumer AR is going to really take off enabling people to build their own personalised AR easily and making those experiences sharable across platforms might just prove to be a tipping point.