For the last couple of years, SXSW has done the “The SXSW XR Experience,” which is “an exhibition that showcases outstanding immersive projects.” This event is always an exciting chance to see what sort of innovation is happening in the world of XR (which includes Virtual Reality and Augmented Reality). 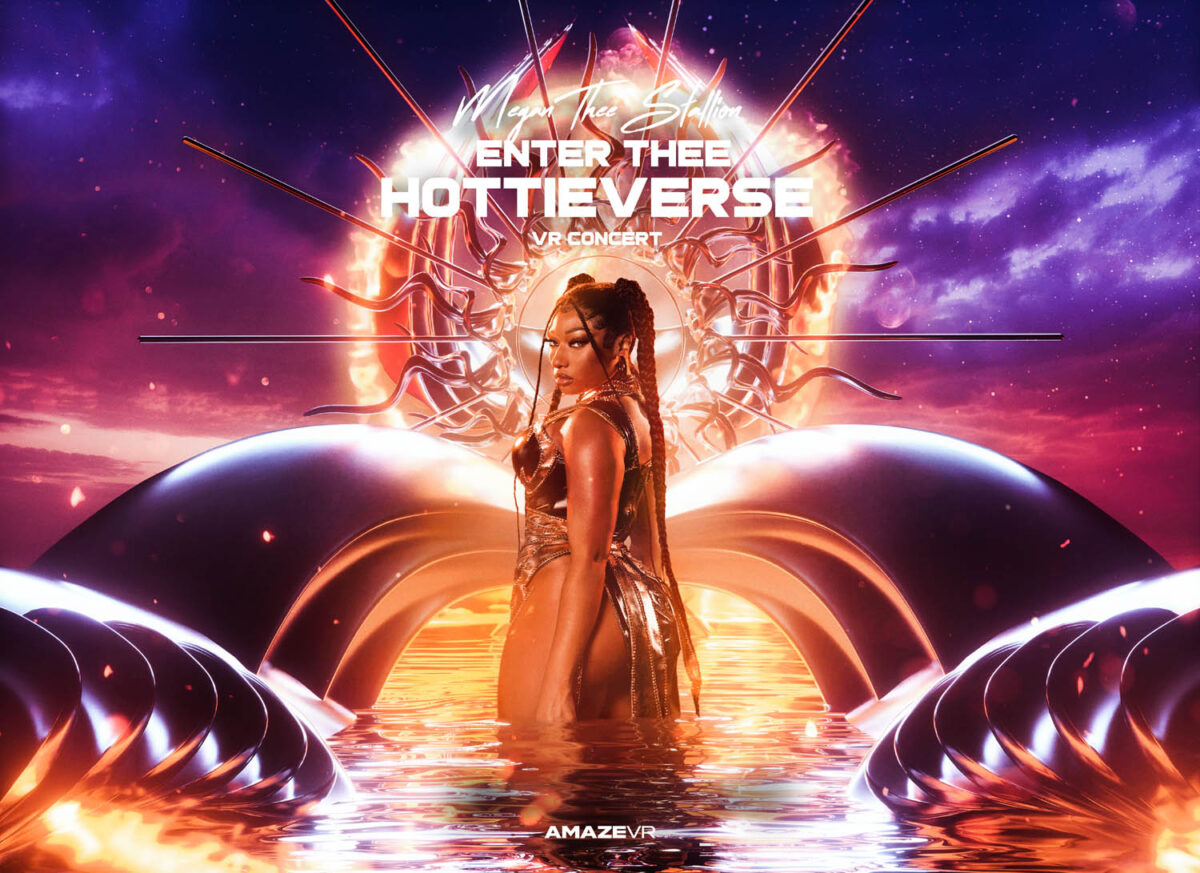 This experience begins, like some others do, with a chance to get used to the controllers. You are in a virtual world. You look down at your hands and see that they are floating and glowing. A mini-game begins. Using hand gestures, you shoot diamonds. After the shooting game, the concert begins.

You can see Megan and her backup dancers on a stage. They feel very close, maybe six feet away. In the background is a giant virtual sculpture of Megan’s face, somewhat stylized and looming with ominous beauty.

Megan dances in your general vicinity while performing. The virtual Megan is almost entirely photorealistic. There is a subtle underlying perfection to the Digital Megan. She has walked out of the “uncanny valley” into a place where she is recognizably human, albeit with a slight sheen of filtered perfection.

Spatial sound puts Megan’s voice right in front of you. Turn your head and the sound is appropriately oriented. It is as though Megan is performing for you and only you. She moves closer. At certain times, she seems only inches away from your face. She plays to the camera (your personal perspective) with wry winks and directed gestures. This artist does an excellent job at performing for a virtual space.

I spoke with Co-CEO, Earnest Lee to learn more about this project. Earnest Lee first mentioned that the other Co-CEO, Steve Lee, is not related to him.  After that, he got into a bit more detail about this company.

AmazeVR was started by co-founders and early executives of a company called Kakao. Kakao started as a texting app in the mobile era. Lee explains that Kakao was founded around a “paradigm shift in technology.” The mobile era was a paradigm shift and Kakao talk took advantage of that.

Lees sees a similar paradigm shift happening now. He explains that AmazeVR was founded in 2015. This was around the same time as Facebook’s (now Meta) acquisition of Oculus, as well as other exciting VR innovations. Lee and AmazeVR viewed this time as a sign that “the next big paradigm shift, was being able to experience things you can’t in real life.”

He says that by replacing the “2D display” with ones that are capable of 3D elements, you can do exciting, new, things. AmazeVR was initially, in Lee’s opinion, focused on building “YouTube of, VR” or “the Netflix of VR.” However, they decided to pivot away from that philosophy when they realized that “if your focus is on everything else you’re not focused on anything.”

So they focused on being a VR concert platform and doing it well. Lee explains that you can’t just say “we made a concert of this, let’s just make a VR version of it.” For a good VR concert experience, you have to plan things from the early stages and learn to work with the medium.

The Enter Thee Hottieverse experience was a chance for Amaze VR to create an artistic experience in a VR environment.  Earnest Lee explains that “AmazeVR is a VR concert platform company trying to bring artists closer to fans than ever before.” For the moment, this “very highly customized project” is their main focus. However, “ultimately our mission is to allow every artist to perform a VR concert on Amaze.” 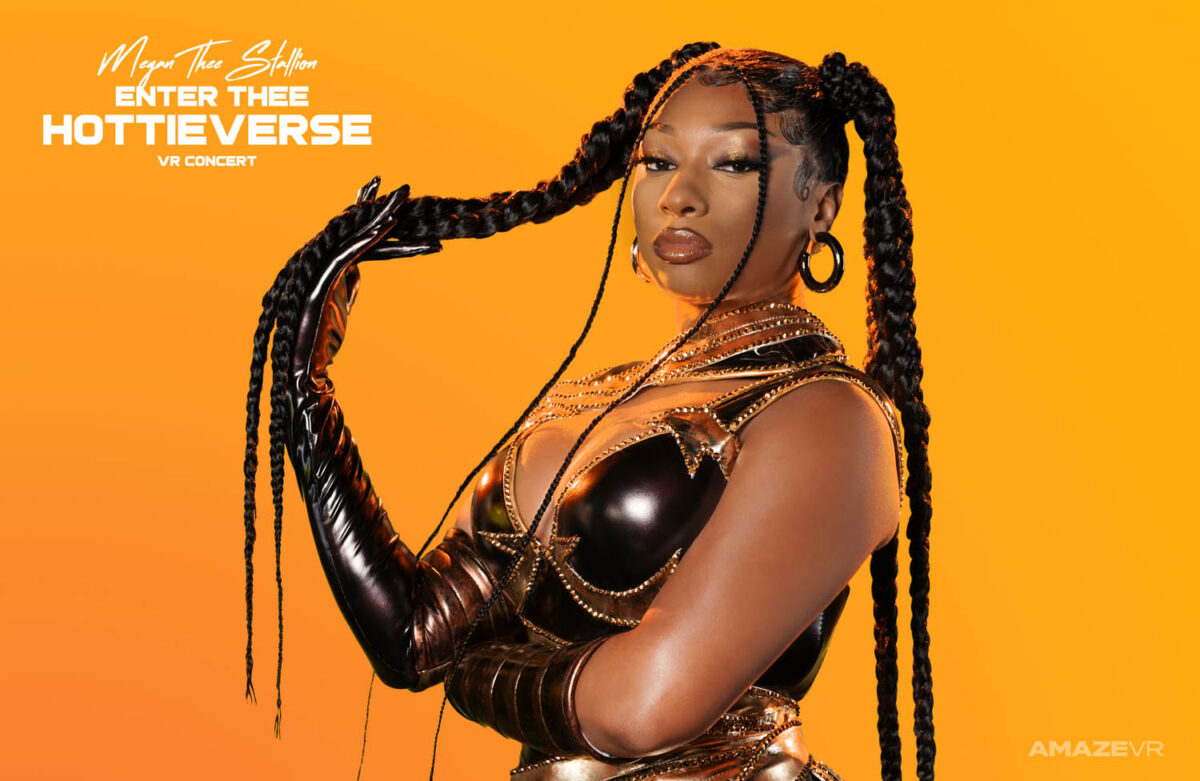 The process of working with Megan helped AmazeVR move forward with its goal of bringing artists closer to fans.  They used their tech innovations to provide a platform for artistic collaboration.

Some of their technology is based on “a foundation of our custom cameras; all built in house, the stereoscopic 9k cameras.”  They had also “built some AI technology around it” so they can “actually calibrate the cameras.”  With the combination of the cameras and AI tech, they were able to send content to their “VFX pipeline” based on “Unreal Engine,” a suite of tools used for creating 3D immersive environments.

They had “decided to fully focus on VR concerts in 2019” because they “believed in the perfect medium of music and VR.” When making a VR concert experience they first focused on the unique “values of VR.” Lee talks about the “feeling of closeness” you can get in a VR experience. “Eye contact” and “presence” can be used to create the “feeling that you’re actually sharing space with somebody.” They made a point of trying to optimize for that.

For the Enter Thee Hottieverse experience, they wanted to bring artistry to the table. They chose Lewis James, “creative director for Post Malone and for some other big artists,” to work on the project. When they collaborated, they ended up teaching him how to use the tools they created. They showed him the unique values of the technology, best practices and things to avoid. With that perspective, he “was able to create a creative treatment” that was pitched to Megan.

When Megan actually experienced a demo of a VR concert experience by AmazeVR, “it just instantly clicked.”  Once she experienced the “visceral reaction” that people can feel in a well-executed virtual world “she knew how to create for that medium.”

This is something that shows in the way she performed. In this VR medium, Lee says that she chose to perform like she is “actually engaging the fan one-on-on as if the fan is actually there in real life.” Her performance included these “moments of intimacy” unique to a VR world. Subtle gestures in her choreography and moments of eye contact were a good use of this particular medium that elevated her performance in a VR space. 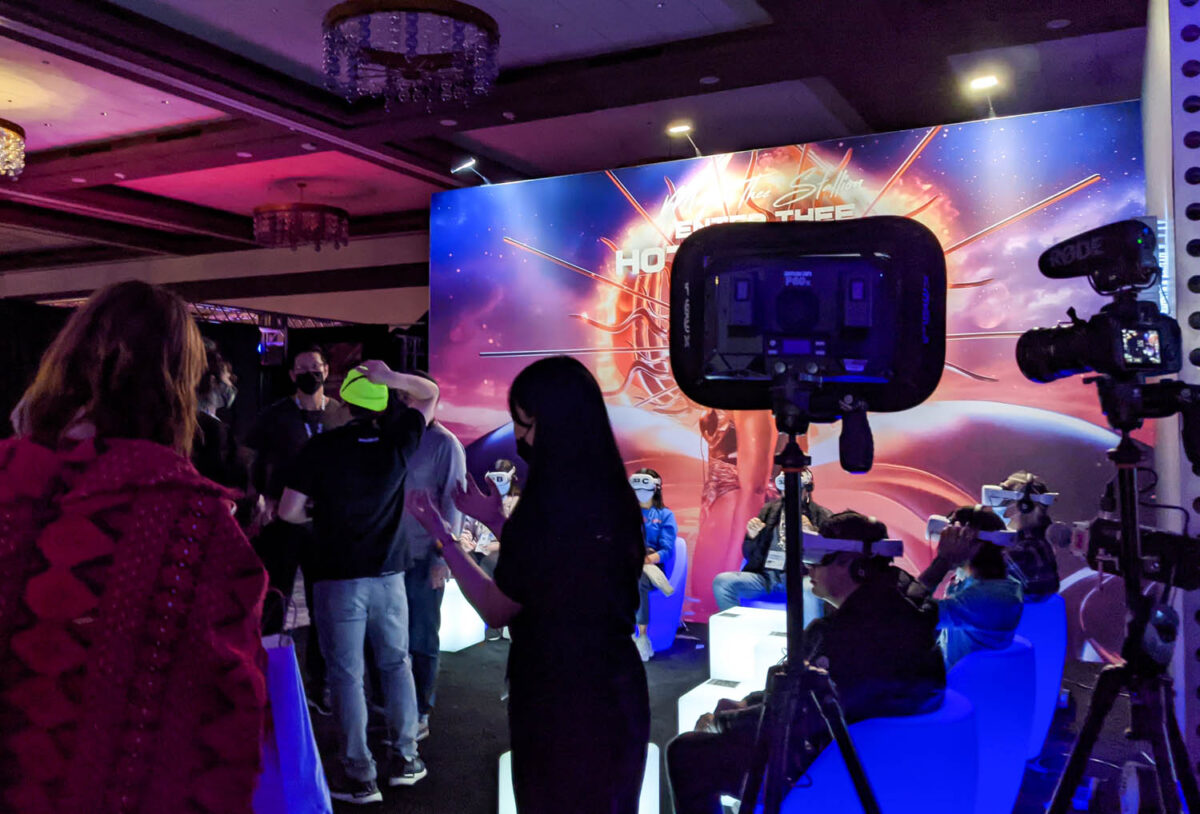 Creating the experience with Megan was enlightening for AmazeVR because she was able to give “very direct feedback, in terms of what to improve on.” Lee explains that she “knows her brand,” “knows her aesthetics” and “knows what voice she wants to convey.” Working with her challenged AmazeVR to create new tools that may be of use to future projects.

One example is how they “created fire.” The first song in the performance is “Savage” and you enter the show over a “vast, open, sea” to reach a “stage engulfed in flames.” These flames were typical “game engine fire.” It was something that reached the current artistic standard for gaming, but it might not reach the aesthetic standards of Megan’s “hotties” (the nickname of her fervent fans).

According to Lee, these “game engine” quality flames didn’t cut it for Megan and she asked them to “make it better.” They didn’t know how, but they got to work. The engineers did “a bunch of R&D” and in the end, they were able to make fire that “actually looks realistic in a way that we can scale.” By working with an established artist who knows her brand, they were pushed to a new artistic standard and now that fire is part of their tool kit for future work with artists.

AmazeVR wants people to “believe in this medium.” So, in addition to creating genuinely artistic VR concerts, they want people to experience these concerts as they were intended to be consumed. For that to happen they want people to have the full VR experience, which requires a headset. So, in order to make that possible at scale for fans, they are “taking it to the masses by working with theaters.” They will be “outfitting these theaters with VR headsets using the 5.1 surround sound audio and allowing some more interactive social elements as well.”

The list of theaters is available on their website https://amazevr.com/ and the tour kicks off in Los Angeles in April.