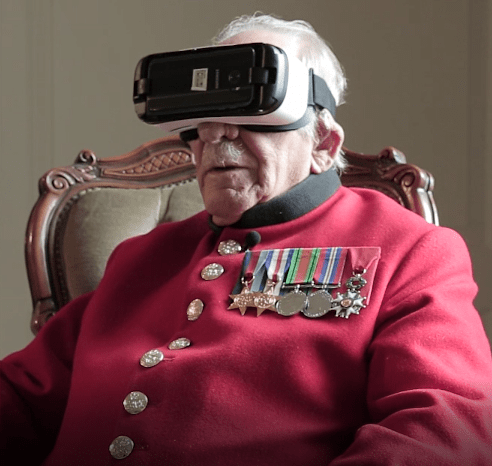 It seems that now, more than ever, we need to remember the price of freedom. In such turbulent times – where we the same discourse of isolationism and racial scapegoating that nurtured Fascism in the buildup to the Second World War seems to be taking hold in Britain and America – we would do well to honour people like Frank Mouqué.

In these troubled times, we would do well to remember the sacrifices people made to defend the persecuted Click To Tweet

Frank is 91, and a Chelsea Pensioner (the iconic charity that provides over 300 veterans with a home and care in recognition of their outstanding service). He was born in Putney and was a corporal in the 263 Field Company of the British Royal Engineers. He participated on the D-Day assault on Sword Beach and in the following weeks joined the action of allied forces that took Pegasus Bridge and liberated several northern French towns from Nazi occupation.

One of those liberated towns – which Frank remembers most fondly – is Armentières. And this week the town used Virtual Reality technology to show how they remembered him too.

In this moving video we see him wearing a Samsung Gear VR headset as he’s given a virtual tour of the town as it looks today. At a local school, he listens to a group of children singing a song in his honour, before going to the Town Hall, where the current mayor presents him with a special medal in recognition of his role in securing the town’s liberation all those years ago.

As the headset is removed, it is clear that the gentleman is clearly moved and delighted by the experience, talking about how it felt “like they were right there.” At that point he is presented with the actual medal that was shown in the video, which he says he will treasure as a family heirloom.

This was a collaborative project between Mutiny Media, Twine and the Royal Hospital Chelsea Click To Tweet

This amazing project was a result of a collaborative effort brokered by creative platform Twine and realized by VR Production company Mutiny Media. It goes to show that the impact of VR goes well beyond gamers and early adopters, bringing such experiences to those less able to physically travel, for example.

Find out more about the Chelsea Pensioners and support them here.