The world is in desperate need of more qualified, motivated, and empowered teachers, as education is the key to achieving global development goals. How can tech help achieve this?

Here’s one statistic that’s hard to wrap your head around: In order for every child to receive a primary education by 2030, we need to recruit and train 25.8 million school teachers. To put this into some perspective, that’s the equivalent of recruiting and training over one third of the entire population of the United Kingdom, and to do so across some of the most poorest and most remote areas of the planet.

The solution, some argue, is to leverage technology to bridge that logistics gap and stretch existing resources to meet the demand.

Yet although this might seem like an impossibly ambitious goal, there is no shortage of passionate individuals willing to join the teaching workforce. The crucial obstacle, however, is the chronic lack of training capacity to empower those individuals to teach.

This problem is most evident in sub-Saharan Africa. The region currently needs 2.7 million teachers and with a fast-growing school-age population this demand will grow by nearly 50 percent in the next decade or so. The Ghanaian Ministry of Education estimates that around 63,000 of the country’s primary school teachers and a further 31,000 secondary school teachers remain untrained.

As the number of primary school teachers in Ghana rose sharply by 61 percent over the last decade according to UNESCO the available training resources simply could not keep up and schools were forced to hire teachers with little or no training. This meant that the percentage of trained teachers fell from 72 percent to 53 percent from 1999 to 2013.

That trend is only set to increase as the demand for teaching soars. To meet its agreed Sustainable Development Goals of providing every child with 12 years of quality education by 2030, Ghana needs a further 189,000 teachers, in addition to training existing ones.

The lack of resources and the challenges of reaching teachers in remote and geographically dispersed areas makes this a daunting task, all but impossible to achieve using traditional training methodologies, which are time-and-labor intensive by nature.

The solution is to leverage technology to bridge that logistics gap and stretch existing resources to meet the demand. And this is precisely what a project called Train for Tomorrow, which was launched by the The Varkey Foundation  earlier this year, aims to do. 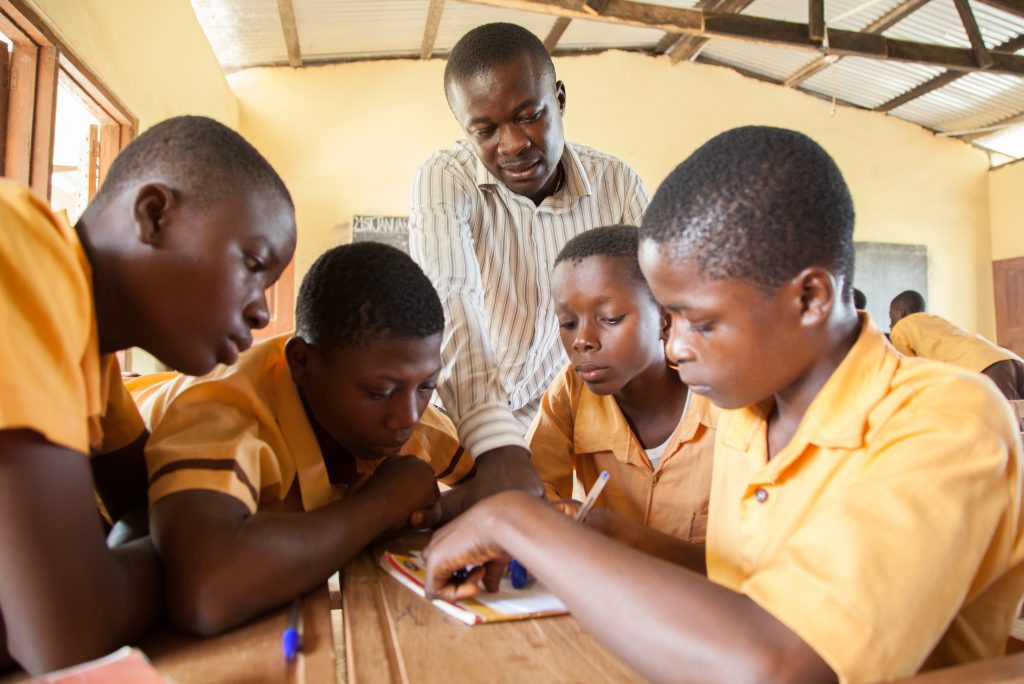 Train for tomorrow is Africa’s first interactive distance learning program aimed specifically at teachers. It works by enabling two-way interactions between trainers and teachers in geographically remote and dispersed locations, meaning they can be reached at a much lower cost. Over the next two years it will use the $2 million grant it received from Dubai Cares to train around 5,000 teachers in Ghana.

The project was inspired by an earlier initiative called Making Ghanaian Girls Great (also known as MGCubed) which successfully used solar-powered computers and projectors to broadcast live lessons by master teachers to schools in deprived and isolated areas.  Funded by the UK Department for International Development, MGCubed taught basic numeracy and literacy to over 8,000 boys and girls, and also provided additional after-school club activities to vulnerable girls on issues around early pregnancy, early marriage, girls’ rights, and financial literacy. The results showed improved maths scores across the board as well as significant attendance increase from 54 percent to 80 percent in less than two years.

What this shows is that there is no need to reinvent the wheel where it comes to using edtech to impact global development. The collaboration and viral spread of content that the internet facilitates is most evident in social media, but it goes far beyond cat memes and clever quizzes. The same technology can be used to create simple and effective solutions, which can be leveraged at relatively low cost to reach a large number of people. And the greatest impact is undoubtedly to be found in empowering teachers, since the ripple effects of knowledge distribution are rapidly multiplied as each trainee is empowered to better teach many children in turn.

The science fiction writer Arthur C. Clarke once famously said that “any sufficiently advanced technology is indistinguishable from magic”; enabling every child in the world to access education would indeed be something magical, but it’s also not beyond the realm of reason. The most exciting thing about using technology in education is that, once a concept has been successfully tested, it can usually be scaled at relatively low cost. That’s why projects like Train for Tomorrow are worth watching, because if they can train 5,000 teachers across Ghana in the next two years, it is not actually that large a leap to imagine that similar initiatives could reach the 2.7 million teachers needed across sub-Saharan Africa, or indeed the 25 million around the world. We will be watching with interest.

This article was originally published on EdTech Digest