As a techie, I count Helsinki as one of my favourite cities – It’s a hotbed of innovation and has a vibrant start-up scene – but there’s a lot more to the city than geeking out.

I regularly visit for events such as Slush – which has become one of the largest tech conferences in the global calendar – and a few months ago was invited to be the city’s resident blogger and cover the Millennium Technology Prize. But one can’t live on algorithms alone, and if the idea of sampling Finland’s cuisine doesn’t immediately excite you, it’s time you thought again. There are plenty of fantastic gastronomic options in town, and I thought I’d share some of them here:

“Typical” Finnish food is hard to define exactly. The country has been independent for less than 100 years, so what you get is a mix of influences from its legacy of being part of Sweden, then the Russian empire – think vodka, caviar and beetroot (you see beetroot burgers on a lot of menus). On the Swedish side, if you’re one of those people who go to Ikea to get your meatball fix, you should stop by Café Engel for tasty and very large portions of the stuff, complete with mash, gravy and cranberries (which work surprisingly well together).

Typical Finnish food is hard to define exactly, but Russian and Swedish influences are prominent Click To Tweet

To see what a typical meal in Lapland looks like, head to Savotta. It’s the kind of place that could feel really gimmicky with the staff wearing traditional attire and a menu featuring things like reindeer stew and bear salami. However, the homely décor comes across as genuine and the staff is friendly, not seeming to resent the uniform in the slightest. We had a selection of entrées which included bear salami (I passed on that but my husband assured me that it was nice enough, although “it’s difficult to tell with salami”. His slow-cooked lamb stew, served in a traditional (gigantic) wooden bowl, was amazingly tender, and the reindeer had a surprisingly delicate flavour, much more subtle than venison. Do save room for pudding though. Not only does the dessert menu come etched on a silver birch log, but the light and sumptuous blueberry cake is a revelation. Blueberry seems to be the national fruit of choice, perhaps because the colour matches the Finnish flag, so you’ll see it featured in many desserts across town.

I enjoyed many great meals in Helsinki, but the beautiful Meripavilionki takes some beating. Located on a pier overhanging the water. It is understandably popular and not very big so making a reservation is definitely advised (we did not get in the first time we tried so booked to come back the next day). The waterside location is ideal for sampling local seafood, beautifully prepared and exquisitely presented. My prawn dish was delicately balanced and the lightly smoked salmon main perfectly cooked. Our favourite was my husband’s starter though, a 3-way mackerel plate showcasing the humble little fish in various cooked and pickled forms. Perfect spot for a relaxed lunch or romantic dinner. 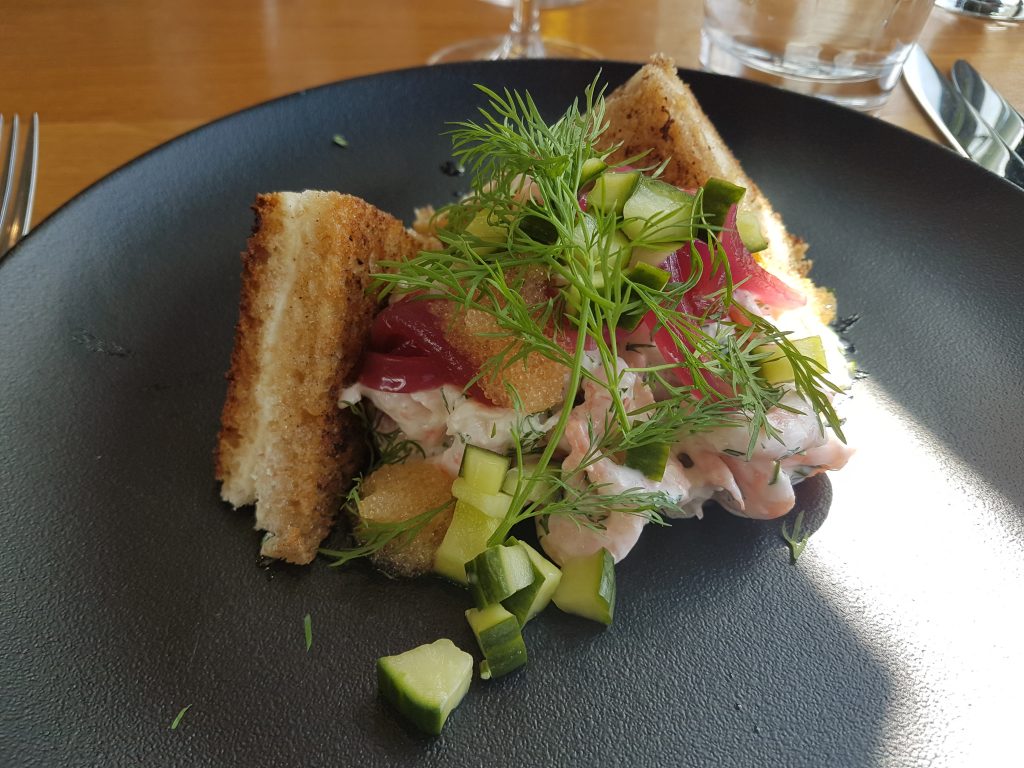 Recently, in San Francisco, my friend (who’s a self-confessed sushi snob) took me to a hidden-away restaurant where we had a meal so extraordinarily good I’m still having trouble believing it was real. That deserves a separate article of course, but my point is that there’s sushi, and then there’s sushi. In Finland the all-you-can-eat buffet options like Konnichiwa, Käpylän Majakka and Kin Sushi are quite popular with those who are not sushi snobs. I feel able to enjoy both kinds of experience, so think the buffets can be a good option for a tasty and good value lunch, although I tend to avoid the more mayonnaise-heavy creations which the Finns seem to be fond of.

If you’re into that sort of thing (and if you aren’t, what’s wrong with you?) it’s nice to sample some local craft beers in the sunshine when hitting a new town. Most restaurants in Helsinki stock at least a couple of local brews such as Karjala or Lammin, and the city has several lovely bars that and microbreweries where you can get a good variety of different styles on tap. If you’re around in the summer when the days are ridiculously long, you have plenty of time to sample all the different kinds before it even starts to get dark.

Most pubs and breweries also serve food, and the atmosphere is usually cosy and laid back. My favourite find was Bier Bier which – as you’d expect – had a fantastic selection of beers in bottles and on tap, plus some of the most comfortable pub furniture I’ve ever sat on. I like a place that makes it hard for you to leave. Other central options include Il Birri and Bryggeri Helsinki, but if you’ve got a couple of days to look around, it’s definitely worth taking a short boat trip from the market square to the fortress island of Suomelina. Once there, just follow the signs to the brewery for more local delights. After a bracing walk you’ll have earned a pint or two.

Street Food is definitely a thing in the Nordic countries, and Finland is no exception. Helsinki hosts a huge extravaganza in March that lasts for several days, but there are celebrations of street food culture happening throughout the year. When I was there in May every square in town got taken over by one such event where anybody is allowed to sell their food wares without a specific licence. There’s something really nice about the organized and good-natured chaos it generates, not to mention the cloud of delicious smells as you walk through. Some of the setups are quite elaborate and professional-looking, while others constitute of little more than a Tupperware dish on a folding bench. What brings it all together is a philosophy that the act of cooking and eating food is a joyful thing to be shared with friends and strangers alike.

Finns REALLY love their coffee, and per capita they consume more than any other nation in the world (a whopping 12 kilos per person per year) which might have something to do with those long months of darkness they have to endure in winter. In Helsinki there’s no shortage of the sort of upmarket craft roastery setup you’d expect to find in places like London or San Francisco, as well as some pretty decent chains such as Espresso House and Robert’s Coffee providing a quick and classy alternative to your usual Starbucks (which inevitably also has a presence in town). Karl Fazer is a nice option in the centre mainly because it offers an array of typical pastries. My favourite of those was a sweet (which I can’t recall the name of, would welcome input in the comments!) looking a bit like a pig’s nose and made from potato flour. You also get a free chocolate with your coffee, which is always a plus.

On the quirkier side, I’d recommend trying Andante, a hybrid of coffee house and flower shop, which means the place not only smells wonderful, but looks beautiful. My barista was Japanese, and a perfectionist bordering on obsessive. My coffee took a long time because he made it again after not being happy with the first try. Worth the wait though.

That mind-set of s “why have one shop when you can have two?” also applies to my favourite Helsinki find, a little place in the design district, Plootu, is a furniture shot/ café. Choose your poison, and then sip it while perching on the wonderful designer and vintage wares. The only downside is that you might be tempted to buy some pretty expensive and large items. I for one was thankful that my own suitcase limitations saved my credit card from a taking a serious beating. It reminded me of a passage in Paulo Coelho’s book The Alchemist, where the owner of a shop selling crystal glasses is convinced by the book’s protagonist to serve cool mint tea to passers-by, thus vastly increasing his sales as customers swear the tea tasted better when supped from the beautiful crystal. That concept that beautiful objects can also be practical, and that are meant to be used, is at the very heart of Finnish design.

Liquorice, like Marmite, tends to be one of those love-it-or-hate-it things. Although I’m very much on the ‘hate’ camp, I felt that it was such a big part of local gastronomy that I ought to give it another chance. At Graniittilinna I had a liquorice-infused Crème brûlée and at Savotta I tried their liquorice ice cream. Both, to my surprise and delight, extremely tasty and not at all overpowering. I’m still not a convert to the actual candy, but I do urge doubters to come to Helsinki with an open mind towards the black stuff.

Yes, you read that right, and no, it’s not a euphemism. Yes Finns go to sauna naked, but it’s just not a thing, except for foreigners, since locals use them regularly pretty much from the time they are born. Because they’re also seen as places to socialize, it is common to eat and drink during a sauna session, and there are usually break areas outside the actual sauna (Sauna Hermanni is one of those) where you can have drinks – not unusual to have beer, and many places let you bring in your own, up to a reasonable limit – and snacks. And that’s where the sausage comes in (get your mind out of the gutter please!) because traditionally you’d roast them on top of the coals in the stove, either wrapped in foil or hanging from a string on top. Clearly that works out better in the traditional wood-fired setups rather than the more modern stoves, but you can still find those around if you look.

Yes Finns go to sauna naked, but it’s just not a thing, except for foreigners Click To Tweet