“At Lush we’re all about feelings, from the way we work to the products and experiences we deliver to our customers and audience,” Adam Goswell, UX & Technology at Lush, tells me as he explains what prompted them to make the Lush Spa Experiment video I’m watching. 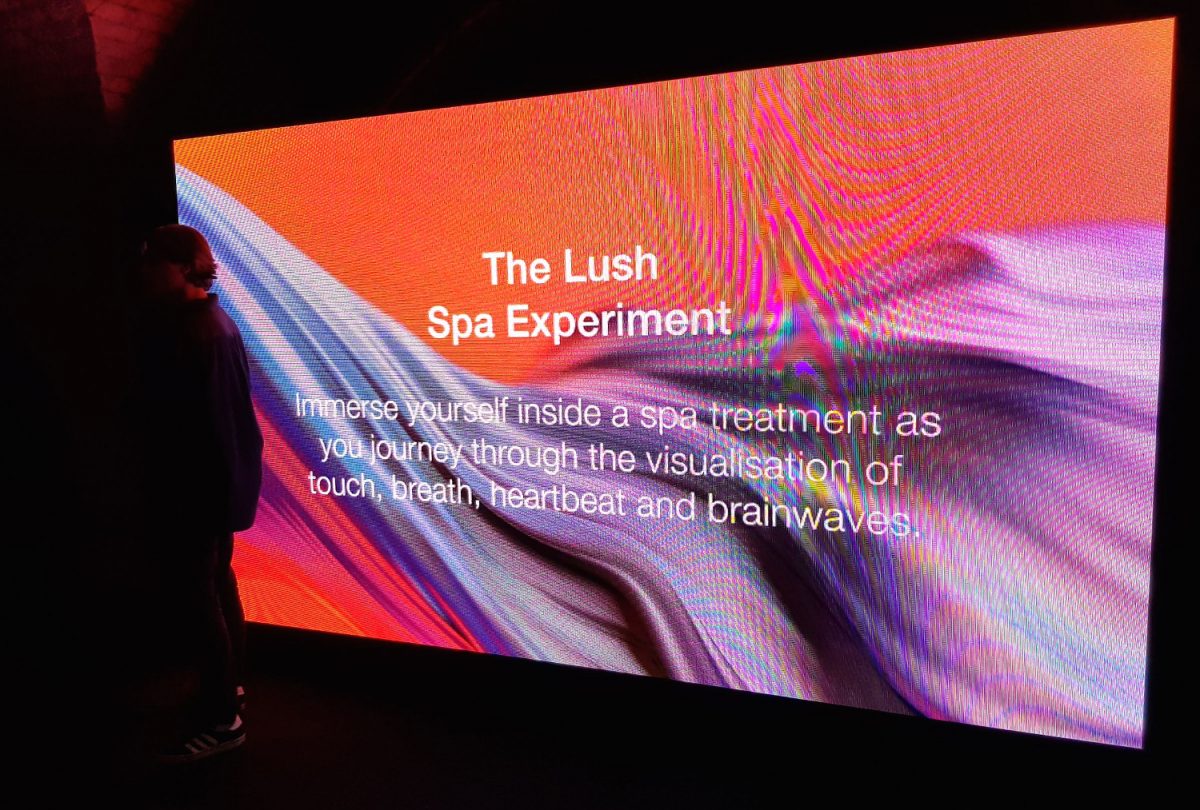 A partnership between Lush and The Mill the project involved capturing and visualizing biofeedback data to show people the effects that a spa treatment has on their bodies and minds.

“The data captured was fascinating. It shows a clear correlation between the treatment and the subject’s biometric response. You can actually see the moments when a sound or touch elicited a shift in brain wave which then triggers a reaction in breath and heart rate,” says Creative Director Carl Addy, who headed up the project at the Mill.

“What started as a film to build awareness around the spa treatments has turned into an iterative exploration of how we can visualize the bodies reactions to varying stimuli within the treatment,” he explains. More recently, they extended the idea into a physical space – which I experienced at the Lush Creative Showcase, where people could observe their heartbeat as it triggered a lighting display. “This gets really interesting as the act itself affects the heartbeat by slowing it down as one focuses on the display.” 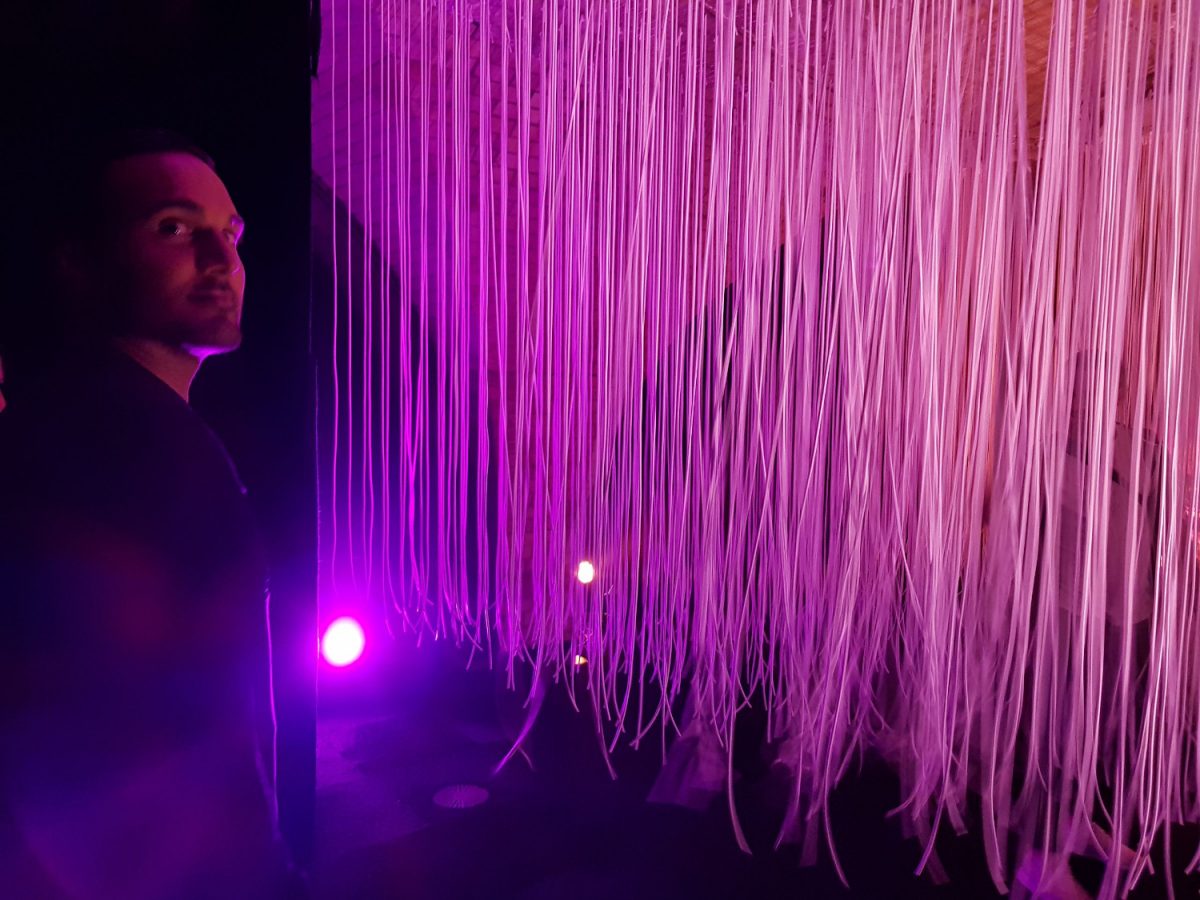 Although the feedback they captured – things like heartbeats, breath, and brainwave patterns – could be used scientifically, the primary objective of this first project was simply to visualize the data in a beautiful way, similarly to projects such as The Art of Data which we wrote about last year.

“We wanted to create an emotive film that is driven by data rather than fixate on the data itself. Our main criteria was to depict a correlation between the choreography of the treatment and the data, to see if the intention of the spa was successful.” 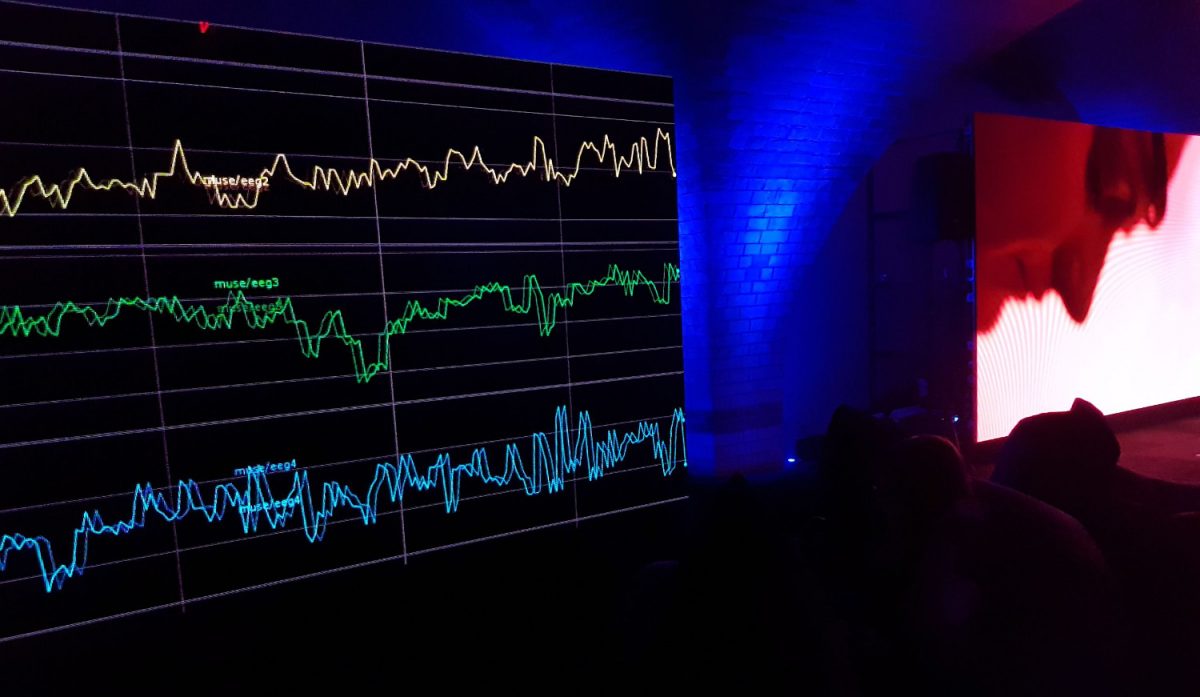 Goswell adds that Lush has also been considering how such biometric data can be used to enhance the customer journey, but they are very mindful of the potential privacy implications of using such intimate data.

“If we can take a read on someone’s feeling and change it for the better and report that result to them that would be amazing….” However, he stresses the need to carefully consider the ethics of using personal biometric data, and ensuring it is clear to users from the onset what will happen to it.

You can check out this hypnotic experiential video for yourself below:

But while this is all well and good, purely in the name of scientific research Tech Trends also felt compelled to collect first-hand data by having some of those Lush Spa treatments ourselves. 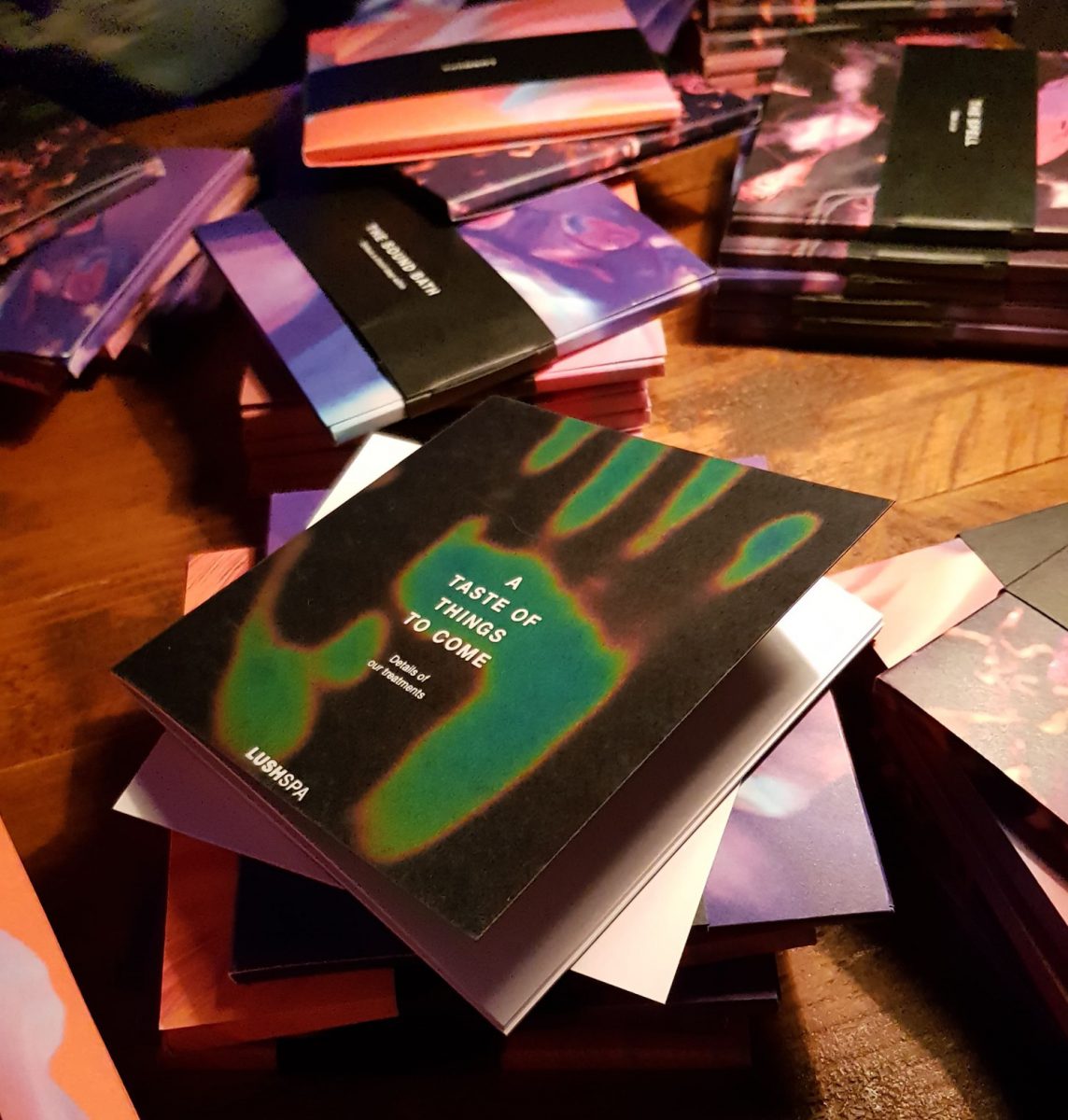 Thus it was that myself and our Digital Arts Correspondent Naomi Hepwork bravely volunteered to take one for the team and head down to Bath, where Lush’s newly refurbished shop houses extensive Spa facilities in its sizeable basement. I know, it’s a hard job, but someone has to do it.

My treatment – The Spell - was a most relaxing blend of a pedicure, reflexology and head massage, delivered – as all Lush Spa treatments are - to a specially composed soundtrack Click To Tweet 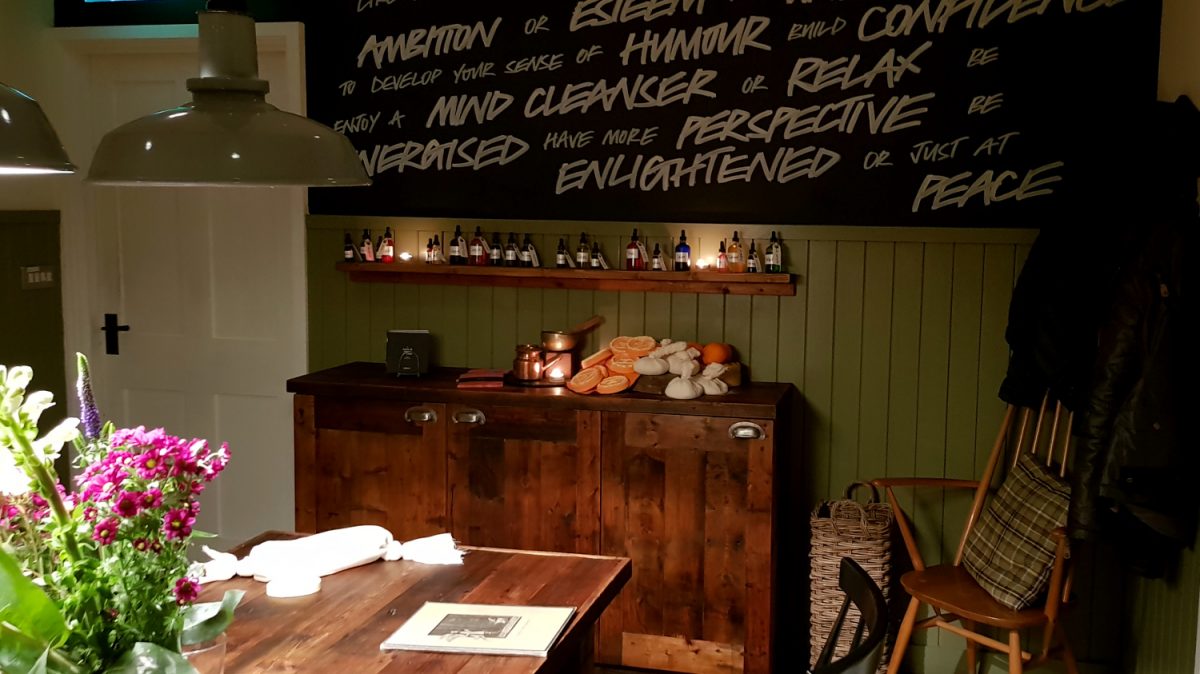 My own treatment – The Spell – was a most relaxing blend of pedicure, reflexology and head massage, delivered – as all Lush Spa treatments are – to a specially composed soundtrack.

There were many original and interesting aspects to the treatment, but one that really stuck with me was that before we went into the room – as we sat at the wonderfully decorated farmhouse kitchen area chatting and filling out the usual form about allergies, preferences and medical conditions – I was given a fountain pen and ink pot, and asked to write down a worry on a scrap of parchment. This was then ceremoniously burned in a little kettle. 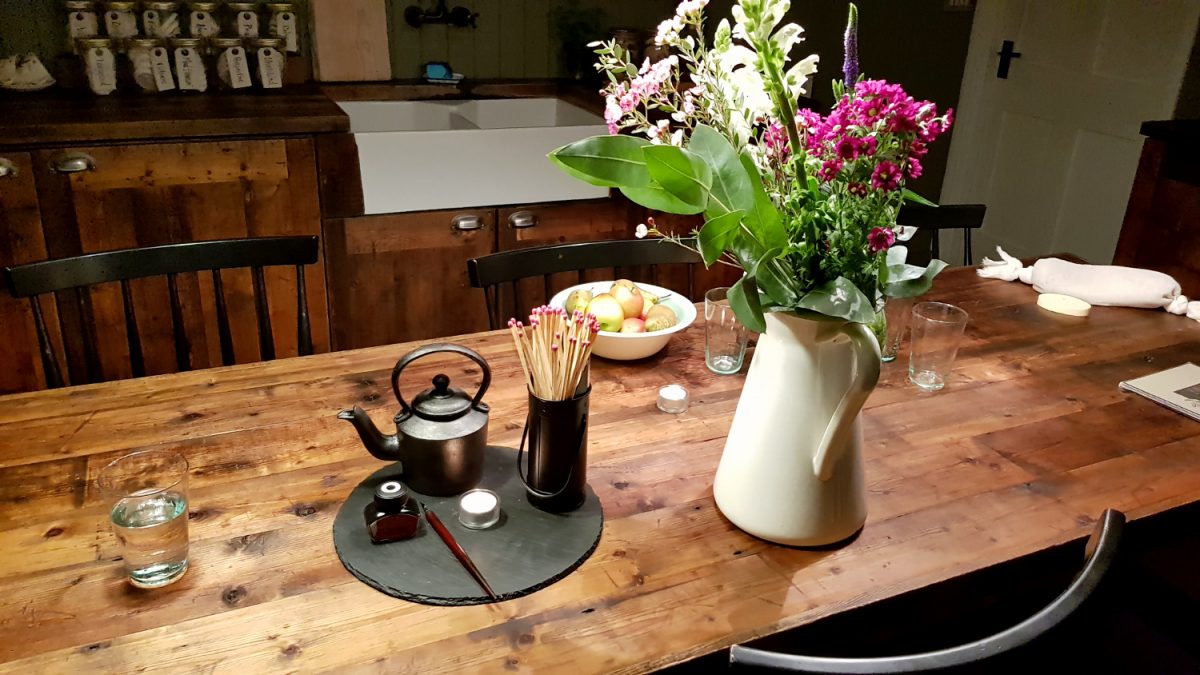 I was given a fountain pen and ink pot, and asked to write down a worry on a scrap of parchment Click To Tweet

These little touches were everywhere: Antique books, the beautifully delicate teacup where they made me a fresh lemongrass and mint tea, the bathroom brimming with products we were encouraged to try… I am seriously picky and borderline OCD where it comes to my spa treatments, and I tend to notice the tiniest things. I seriously could not spot a single area that did not shine with care and careful consideration. The Lush Spa is clearly a labour of love. 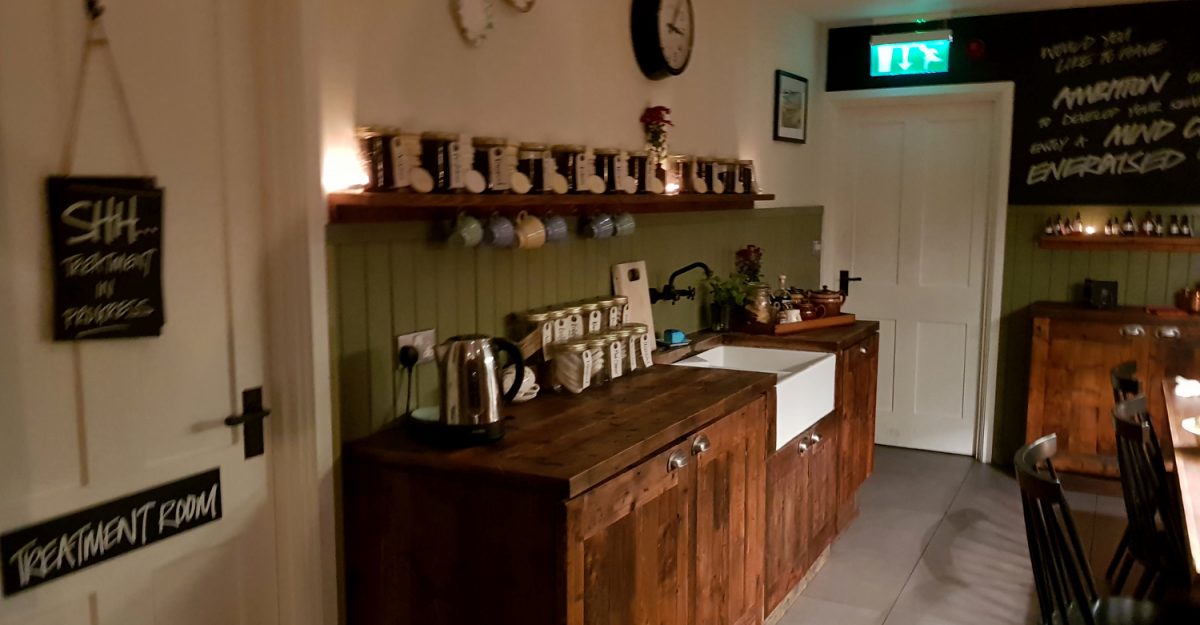 As for my colleague, who was in great need of a pampering break from a lengthy spell of baby-induced sleep deprivation, she dove straight into an elaborate treatment which is exclusive to the Bath Spa, and… Well, I’ll let her tell you for herself…

What could be more uplifting in the dead of winter than a visit to Bath to try out the Lush spa?

Lush have eight spa locations, in which you can have a variety of highly customised or location specific treatments. We went into the Lush store on Union Street and were greeted at the door by friendly staff, then ushered into the basement which has been transformed into the most extraordinary setting – a fully furnished country kitchen with a corridor leading off to a suite of treatment rooms, all created with beautiful detail, something like a cross between your most tasteful friend’s house and a really high quality immersive theatre experience.

I had opted for ‘Tales of Bath’, a head and shoulder massage, followed by a bath, followed by a body massage, and it was like no other treatment I’ve ever received. First of all, the therapist was really top drawer, obviously highly trained and confident. She set me at ease straight away in the pre-treatment chat, and reduced me immediately to a state of near torpor as she gently but thoroughly unkinked my dodgy shoulders. The sound track for my treatment was custom made and recorded in caves under the city. As I lay in the bath, with an absolutely vast, light-up Lush bath bomb, the music gave way to a fairy tale about the origins of bath which was both calming and held my attention. I can’t emphasise enough how much care has gone into every aspect of these experiences; the Lush website talks about sending two musicians down the length of India solely to develop the music for their ‘Karma’ treatment and it was clear that this same amount of attention had been paid to every detail of the spa.

After the bath I lay on a heated massage table for my full body massage, which seemed to synchronise with the music and was totally unhurried. It felt like every muscle in my body had been comprehensively pummelled without being painful at all. We then re-convened for tea and a chat with the staff who again seemed to have endless time for us.

All in all, with its immersive themed treatments, bespoke décor and custom designed sound, this was as much art installation as traditional spa experience. Now that I’ve been to the Lush spa, others will seem pretty shallow by comparison, all clichéd ‘luxury’ décor and dreadful piped music. It is a uniquely creative, comfortable, multisensory experience, NOTHING like other spas.

It’s safe to say that had they been monitoring our biofeedback after our respective treatments, it probably would have shown two flat and happy lines. I can’t remember the last time I felt so happy and relaxed.

Naomi Hepworth is Tech Trends’ Digital Arts and BabyTech correspondent. You can follow her on Twitter @NaomiHepworth and connect with her on LinkedIn.