Can deep learning and blockchain technology help us slow or even reverse the ravages of the aging process?

Longevity research has momentous implications for our lives, because it goes beyond merely living longer. We’re talking about living better, healthier lives, and potentially also shifting the goalposts where it comes to the “ticking biological clock.” Just think for a second about what that could do for gender equality in levelling the career playing field for women considering whether or not they want to – or can afford to – have children. It quite literally changes the rules of the game.

So it’s no wonder there was such buzz around Insilico Medicine – a Baltimore-based AI company specialized in the application of deep learning for drug discovery and aging research – at the Pioneers Conference in Vienna last month. As Dr. Alex Zhavoronkov, Founder and CEO of Insilico says in the video below:

“Modern artificial intelligence now has the ability to capture some of the most important biological features that change during aging and we can now use it to reverse some of those processes.”

Longevity research has momentous implications for our lives, because it goes beyond merely living longer Click To Tweet In 2017, NVIDIA selected Insilico Medicine as one of the Top 5 AI companies in its potential for social impact, and recently it was also named one of the global top 100 AI companies by CB Insights. Insilico’s approach of running whole-body personalized simulations in high performance computer systems is disruptive because it means that drug discovery can be done more quickly and effectively whilst also minimizing the need for animal testing and human clinical trials.

“More than 90% of the molecules discovered the traditional techniques and tested in mice fail in human clinical trials. Our goal at Insilico Medicine is to develop advanced end-to-end AI solutions to discover the optimal pre-clinical candidates,” explains Zhavoronkov. “Our collaboration with WuXi AppTec enables us to focus on artificial intelligence without the need to invest in the expensive laboratory infrastructure. It also enables us to collaborate with some of the world’s brightest medicinal chemists and biologists to optimize the drug development process.”

Now Insilico has just announced a new research collaboration with WuXi AppTec, which will enable the company to perform the rapid experimental validation of the molecules discovered using AI and generate the valuable data to advance its AI research.

“We devised series of experiments to test the capabilities of the novel molecular generators and generate valuable data for the AI-powered drug discovery. The results we saw so far look very promising and provide some confidence that artificial intelligence and deep learning can be helpful for drug discovery,” said Dr. Tao Guo, Vice President, Head of International Discovery Service Unit of WuXi AppTec. “The compounds generated by Insilico’s approaches to artificial intelligence have the potential to shorten cycle times and improve the quality of pre-clinical candidates.”

The amount of their latest investment round (which also included Pavilion Capital, BOLD Capital and longevity therapeutics company Juvenescence) was not disclosed, but the Insilico had previously raised over $14 million according to Crunchbase.

Insilico is headquartered at the Emerging Technology Centers at the Johns Hopkins University Eastern campus in Baltimore, with R&D and management resources in Belgium, Russia, UK, Taiwan and Korea sourced through hackathons and competitions. Their work is dedicated to extending human productive longevity and transforming every step of the drug discovery and drug development process through excellence in biomarker discovery, drug development, digital medicine and aging research.

It pioneered the applications of the generative adversarial networks (GANs) and reinforcement learning for generation of novel molecular structures for the diseases with a known target and with no known targets. Since 2016, Insilico Medicine published multiple research papers, demonstrating the capabilities of GANs and RL systems for de novo generation of diverse molecules with the desired molecular properties, and preliminary experimental validation uncovered the most promising research directions.

“What impressed us the most about Insilico Medicine was the breadth of its technological capabilities and applications, ranging from target identification and small molecule generation using next-generation artificial intelligence to expertise in blockchain and aging research,” explained Mr. Edward Hu, Chief Financial Officer and Chief Investment Officer of WuXi AppTec.

In addition to working collaborations with the large pharmaceutical companies, the company is pursuing internal drug discovery programs in cancer, dermatological diseases, fibrosis, Parkinson’s Disease, Alzheimer’s Disease, ALS, diabetes and many others, so needless to say Tech Trends will be monitoring their progress with great interest, watch this space. 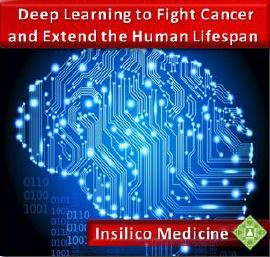