Some of the biggest names in English football are partnering with Intel to make their matches more immersive.

Arsenal, Liverpool and Manchester City supporters will be able to experience the biggest match moments from every angle Click To Tweet

In 2018 alone, technology investments in sports reached nearly $1 billion, but the industry is far from immune to disruption as consumer behaviour is shifting among sports fans too. This is driving technology, leagues and brands to look at new ways to meet the expectations of supporters for more powerful, meaningful, and emotional experiences, and immersive technologies are an ideal fit for delivering that.

“Imagine watching a season-defining moment, then reliving it from any angle including from the perspective of your favourite player as they run up to take a penalty or make an improbable goal-line clearance.” That is the promise that Intel’s latest partnership is selling to Premiere League fans of three of the most popular clubs in Football (or soccer if you’re American)

From March 10th, Arsenal, Liverpool and Manchester City supporters will be able to experience the biggest match moments from every angle, whether they’re watching a live broadcast and highlights or reliving post-match from their clubs’ official website, mobile app or social media.

The feature will be delivered with Intel’s True View technology, which will be rolled out Emirates, Anfield and the Etihad Stadium. It will include a “Laser wall” – a virtual plane giving viewers a clear picture as to where players are positioned on the pitch – and a “Be the player” capability which freezes a particular moment in the match so you can see the pitch from the eyes of a particular player. This last one promises to be not only fun for the fans, but also presents tantalizing possibilities for commentators and even referees, as it gives you unique insight into tactics, decisions, and play outcomes.

“Intel True View enables fans to immerse themselves even further into the game and has the power to add a new depth to match highlights, which can significantly improve the supporter experience. This technology has the potential to add a new dynamic to how people interact with the game and create different conversations with our fans around the world,” explains Billy Hogan, Managing Director and Chief Commercial Officer, Liverpool FC.

The process uses volumetric capture whereby footage is recorded from 38 5K ultra-high-definition cameras that includes height, width and depth of data to produce what are called voxels (pixels with volume). After this content is captured, huge amounts of data is processed with servers powered by Intel Core i7 and Intel Xeon processors. The software then re-creates all the viewpoints of a fully volumetric 3D person or object, and the information is rendered into a virtual 3D environment where you can experience all the plays and angles with 6 degrees of freedom. This will re-create the action on the pitch and present it to fans from various vantage points – effectively allowing fans to choose the point of view from which they want to experience a particular play.

Intel’s True View technology will be rolled out Emirates, Anfield and the Etihad Stadiums Click To Tweet 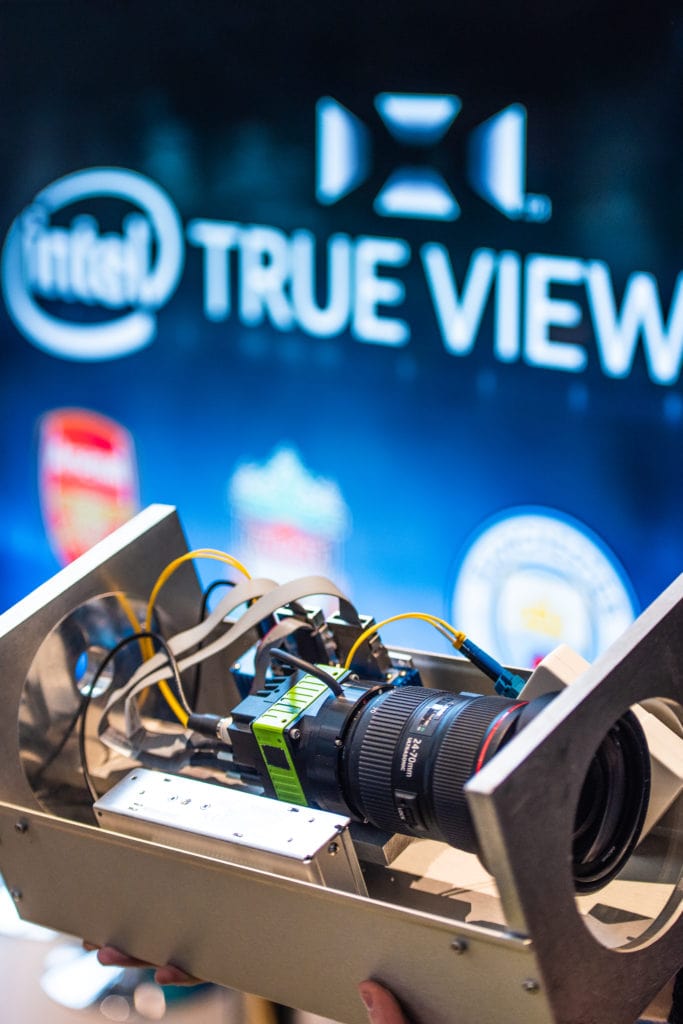 “With dedicated supporters across the globe, football fans are passionate about the tactics as much as the goals scored, and Intel True View will highlight the immersive experiences unique to the style and skill of football,” says James Carwana, Vice President and General Manager of Intel Sports, who believes the technology has the potential to transform the experience for fans of the beautiful game: “Immersive media experiences continue to create more opportunities for sports teams and leagues to put the fan experience first,” he adds.

The fact that three of the biggest names in the world’s most popular sport are on board with this shows how major sports brands are getting wise to the power of immersive technologies to engage their fans in new ways.

“We have seen the impact this Intel technology has had in other sports leagues across the world and are excited that it will be installed at Emirates Stadium,” says Peter Silverstone, Commercial Director of Arsenal FC, which has a staggering 780 million fans around the world. “This partnership will give our fans a whole new view of the game, as the technology effectively allows a supporter to step into the boots of players and see the game from their perspective”.

Intel’s ‘True View’ Puts Fans In the Boots Of Their Favorite Footballers via @alicebonasio https://t.co/x8aa9PYecf pic.twitter.com/Sh5RY1hMpP