Much has been made of the use of robots to increase efficiency in warehouses – with e-tailers such as Amazon announcing significant investment in that area. But as impressive as those robots might look, they are still extremely expensive, and much better suited for picking large items and crates rather than putting together individual items to be shipped out to customers. For that, you still need to have a human walking around a warehouse for 8 to 12 hours a day, picking each item out of a shelf by hand. 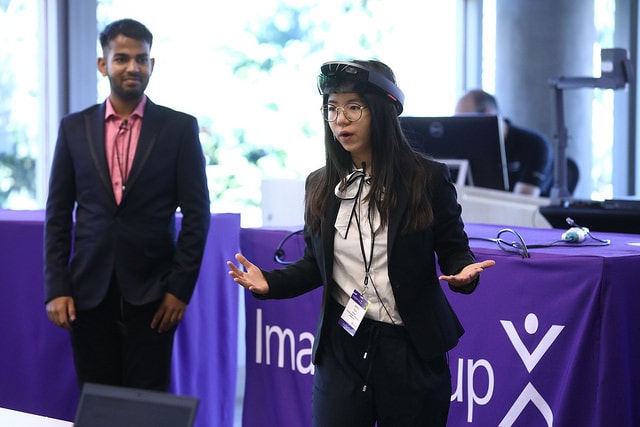 But a team of students from Georgia Tech believe they can make that manual process a whole lot more efficient: They developed an application called PickAR, which promises to dramatically streamline that process by using HoloLens Mixed Reality technology.

Their company – called Oculogx – has already attracted attention from major retailers such as Walmart, and were the runners up in this year’s Imagine Cup, Microsoft’s global student technology entrepreneurship competition.

The app combines features such as GPS-style mapping and path planning, head-mounted barcode scanning and checklist management into a single hands-free interface. This leaves a warehouse pickers free to use both hands to handle the actual items he needs to pick up, as opposed to managing handheld instruments like a handheld barcode scanner and a clipboard with a checklist.

“In our lab, when we were comparing against other dense picking mechanisms like voice pick, paper pick, and tablet pick, we saw a 37% decrease in the time taken to pick with wearable headsets and an improvement in accuracy,” says Industrial Engineering student and Oculogx Co-Founder Charu Thomas.

She met her Co-Founder Sarthak Srinivas outside the office of Thad Starner (Google Glass’s inventor) at Georgia Tech. As they started talking about their respective mixed reality ideas, they found a common interest in the technology’s supply chain applications – Thomas was looking at maximizing the use of space when packing bins into trucks – so it made sense to join forces and start working together. 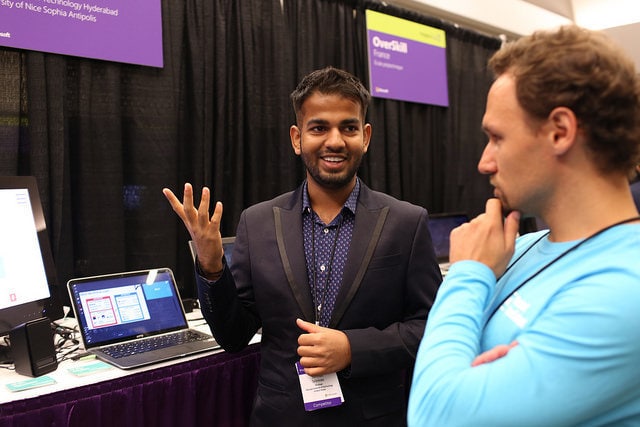 At the time, Wenqi Xian was also working with Srinivas at Georgia Tech’s Augmented Environments Lab and she – together with computer science student Cheng Hann Gan – joined the Oculogx team to build their first prototype for HoloHack Atlanta – a HoloLens hackathon sponsored by industrial devices manufacturer ThyssenKrupp.

“Initially, we wanted to build a general mapping application, which could map out a space and then provide directions to get from one place to another within that space. However, while discussing with ThyssenKrupp and Microsoft representatives at the venue, we decided to narrow the scope of the app to warehouses, adding features like barcode scanning and warehouse mapping to focus on improving the efficiency of the order picking process,” explains Gan.

Srinivas had previously studied the logistics of order picking during his research for the Contextual Computing Group (another MR lab he worked in at Georgia Tech) but after the hackathon he started visiting warehouses to get a sense of how order picking actually worked on the ground. Seeing the huge technology gap between what is used in a typical warehouse and what they were working on in the lab convinced them that they were on to something.

“By the time we arrived at the Imagine Cup World Finals in July, we had visited over 20 warehouses and interviewed over 60 people involved in logistics and supply chain relating to our application,” Srinivas recalls.

Based on feedback from judges in the Imagine Cup US Finals – that they would to see the product working in a real warehouse, the next step was to test the app as a paid proof of concept in a real in the metro Atlanta region. This led to them working with Walmart, feeding the company’s historical data into the system and offering them estimates of time savings based on their current operations and the use of Mixed Reality technology in comparison to their current methods.

“We now want to make this a real product rather than just a cool demo,” says Thomas. And Srinivas adds that they have identified several facilities in Europe, Asia, and Australia who have expressed interest in actually piloting the technology, and are in the final stages of deciding which one they will be integrating with for the upcoming proof of concept and pilot which they’re aiming to launch next semester.

Oculogx are also continuing to work together with Walmart, but are not yet disclosing the details of the next phase of the partnership. Given the fact that all the students in the team are now working full-time on product development over the Summer and Srinivas is even taking a break from his studies next semester to focus on PickAR, momentum does seem to be building as more companies are getting wise to the potential of Mixed Reality to increase efficiency and save them money.