Connected data and devices are set to transform city living, but what exacly will that look like?

Tech Trends was invited to an event in London exploring the future of Smart Cities and the role Data will have in making them run smoothly. And the experts gathered to discuss these themes at One Canary Wharf were well placed to comment on the challenges ahead, as they’re working on the front line of the data revolution. 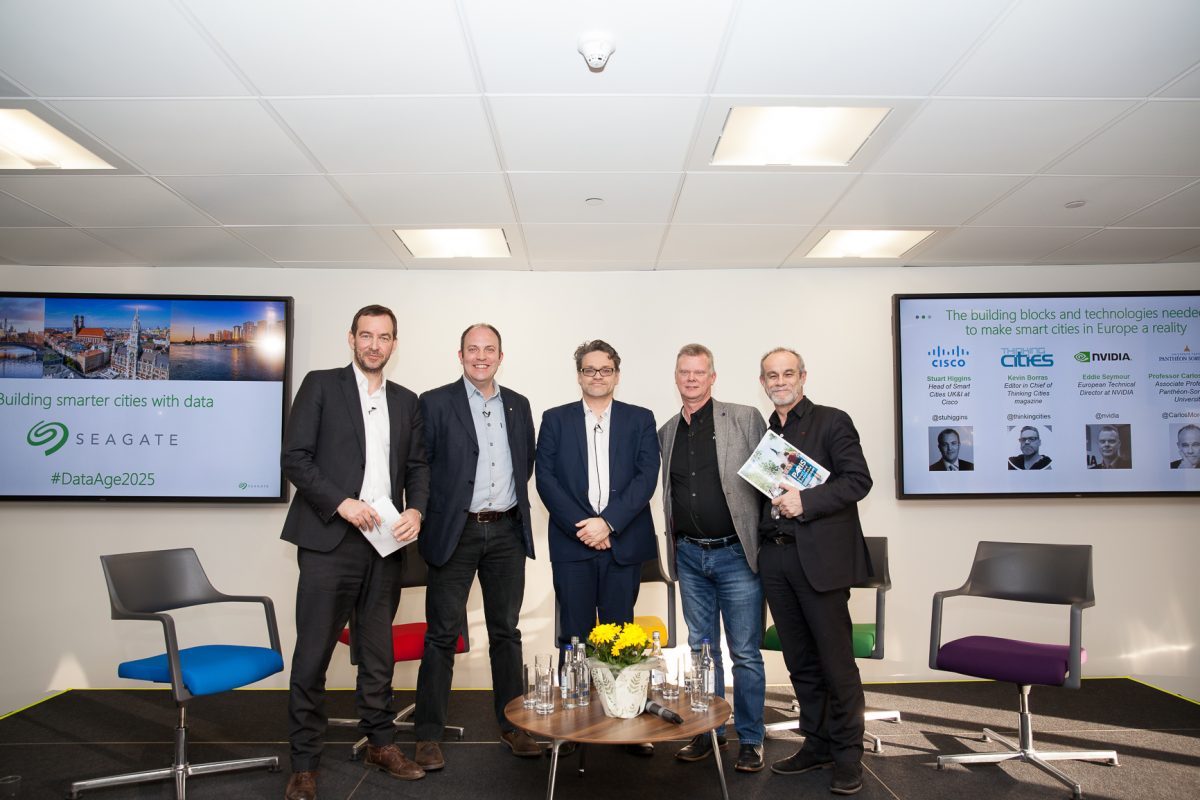 This concept of Smart Cities is certainly something we’ve keenly interested in at Tech Trends – we’ve recently covered topics such as automation and intelligent mobility on the blog – but it’s actually incredibly difficult to grasp what that actually means. The implications of having a truly smart, networked city – in terms of how it could change our lives for the better, how it might impinge on our privacy or how it will certainly drive changes to the law and society – are truly momentous. Some of these were detailed in the white paper released at the event, Data Age 2025 which outlined some interesting findings:

“Cities across Europe are gradually becoming more digitalised and connected, and subsequently being flooded with an overwhelming amount of data.” explained Kate Scolnick, Senior Vice President of Investor Relations and Treasury at Seagate, “In fact, our Data Age 2025 whitepaper revealed that in less than 10 years’ time, the average person anywhere in the world will interact with connected devices nearly 4,800 times per day – that’s one interaction every 18 seconds.”

The advent of real-time data has brought with it a clear shift from past decades where data was used in a more academic, retrospective way to analyse the past, to the present where instant information is consumed not only to inform but to determine our actions in the moment, often in life-enhancing and life-critical ways. It is the lifeblood of our rapidly growing global economy. Our very digital existence, as defined by the sum of all data created, captured and replicated on our planet in any given year, is growing rapidly, and this white paper defines it as the ‘Global Datasphere’.

The IDC forecasts that by 2025 the Global Datashphere will grow to 163 zettabytes (a trillion gigabytes). That’s ten times the 16.1ZB generated in 2016. The IDC also estimates that by 2025 almost 20% of data will be critical to daily life and nearly 10% of it will be hypercritical. Yet flipping through at the Data Age 2025 report I get the impression these numbers are on the low side of what is possible.

“With such an increasing amount of data available, it becomes apparent just how big a role data storage will have to play in developing smart cities. Data storage mobility, latency and reliability will all be key and being able to turn data into something actionable and of real benefit to citizens will be of critical importance to enable the smart cities of tomorrow to thrive.” concludes Scolnick.

In the past few decades society has witnessed a transition from analogue to digital. What the next decade will bring in terms of our demands on systems of data storage and connectivity is literally unimaginable. From power grids and water systems to hospitals, public transportation and road networks, the growth in real-time data is remarkable both for its volume and its critical significance. Today it is a vital element in the smooth operation of all aspects of daily life for consumers, government, the military and businesses alike. And that trend will only continue to ramp up, so we’d best get ready.

In the past few decades society has witnessed a transition from analogue to digital. What the next decade will bring in terms of our demands on systems of data storage and connectivity are literally unimaginable Click To Tweet