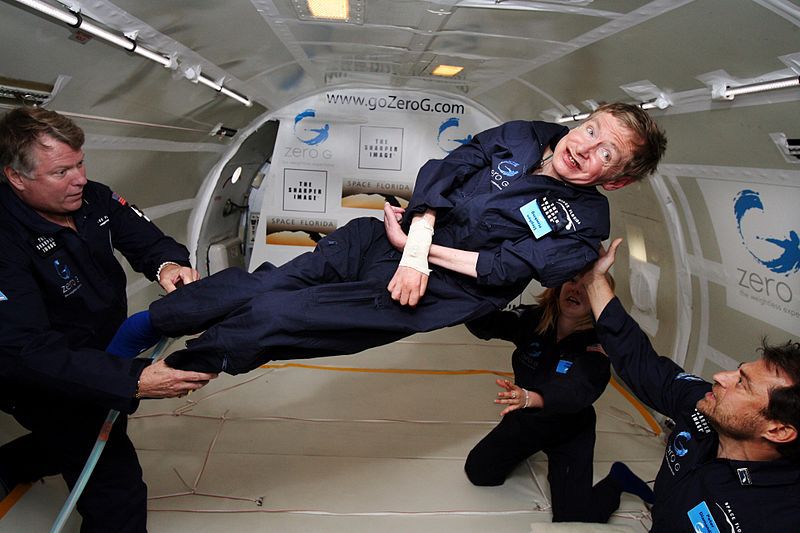 How the world’s most beloved scientist taught us about life, the universe, and everything.

I once met Professor Stephen Hawking as he was coming out of the elevator at the John Lewis store in Cambridge (UK – The original one), where we both lived at the time.

And although I’ll admit this might be far from the most interesting Stephen Hawking story out there, it’s still one of my favourites. Being in his presence was an incredible feeling. I felt ridiculously honoured to have bumped into him in this ordinary shop.

What made Stephen Hawking so special wasn’t just the fact he was a genius. He was, above all, a fantastic teacher Click To Tweet

Now, after his death, I feel much the same way about having had the honour of sharing the same time-space with him. In an age of fake news, President Trump and imminent Brexit, he was our steadfast voice of reason. Right to the end, he advocated for the things he felt passionate about, such as defending the National Health Service against the likes of Health Secretary Jeremy Hunt who – with a level of misguided arrogance I can’t begin to comprehend – actually chose to argue with him (with entirely predictable results).

And all this he achieved with wit, wisdom, and a wicked sense of humour, which endeared him to millions around the world. When combined with the inspiring way in which he defied an illness that should have killed him and transcended the disability which left him only able to move a few muscles on his face, he is indeed a formidably inspirational figure.

But what made Stephen Hawking so special wasn’t just the fact he was a genius. He was, above all, a fantastic teacher. Someone who found a common language for incredibly complex ideas, so we could all share the infinite wonders he saw in this universe of ours.

As I return to Dubai to cover the Global Education and Skills Forum, I find myself amazed all over again by the many stories of how teachers inspire and enable us to reach higher and become better people. Which is why I’m an enthusiastic supporter of the Varkey Foundation’s Global Teacher Prize, which recognizes their monumental contribution to society, so often underappreciated.

So it wasn’t really a surprise when I found this video of Professor Stephen Hawking, announcing the 2016 finalists of that prize and talking about how he, too, had been encouraged and nurtured by a teacher at a crucial point in his early life.

In an age dominated by megalomaniac leaders, the fact that arguably the smartest man in the world never took himself too seriously was enormously refreshing, and that world feels much emptier and scarier now that he’s no longer amongst us.

I remember when I went to watch the Monty Python comeback show in the O2 a few years ago, one of the sketches had Brian Cox popping up on the giant video screen on stage, ranting against the scientific inaccuracies of the Pythons’ “Galaxy Song” only to be run over by Hawking, who was then sucked up into the ether to sing out the rest of the song while surfing through a brilliantly animated universe. That is how many will remember him, and I don’t think he would have minded.

In an age dominated by megalomaniac leaders, the fact that arguably the smartest man in the world never took himself too seriously was refreshing Click To Tweet

A fan of cult comedy Sci-Fi series Red Dwarf, Hawking also graced several episodes of hit geeky TV show The Big Bang Theory and was the only guest to ever appear in Star Trek playing himself. Most people will also recall his appearance in The Simpsons, and an action figure of his incarnation from the show sat proudly on his Cambridge desk as he featured in John Oliver’s Last Week Tonight, in a segment aptly entitled “People Who Think Good”

This Tweet from a BBC reporter sums up that sense of humour beautifully, as he was certainly not adverse to playing a prank:

Hawking story was doing rounds at Newsnight. Producer left in room setting up for interview. Pulled out lead for light and Hawkins slumped forward in chair like disconnected something vital. Producer runs for help, returns to room to find Hawking chuckling. #RIPStephenHawking

The world without Stephen Hawking feels like a much scarier place. You somehow felt that if aliens invaded or a meteor was hurtling inexorably towards earth, he’d be the one on speed-dial, the sort of person who could come up with a “42” type of answer to our troubles, like in Hitchhiker’s Guide to the Galaxy.

Yet that also feels a bit selfish, because he gave us so much, and maybe it was just time for him to go on a new adventure. So I will echo President Obama’s wish, and picture him, much like in the Monty Python song, happily gallivanting through the universe.

Have fun out there among the stars. pic.twitter.com/S285MTwGtp

Alice Bonasio is a VR Consultant and Tech Trends’ Editor in Chief. She also regularly writes for Fast Company, Ars Technica, Quartz, Wired and others. Connect with her on LinkedIn and follow @alicebonasio on Twitter