Originally developed as a Sony product, the Vegas Pro & Movie Studio editing packages have had a revamp after being recently bought by Magix.

Previous versions had felt a bit stuck between two very different target markets, with its professional software too basic for professional filmmakers and its consumer version too complicated for the average amateur home user. Its latest release, the Vegas Movie Studio 14 Platinum does still seem to be aiming for both, describing itself as”easy-to-use pro-level” software. As a professional who routinely uses a range of high-end video editing packages such as AVID I was curious to find out exactly what that meant. 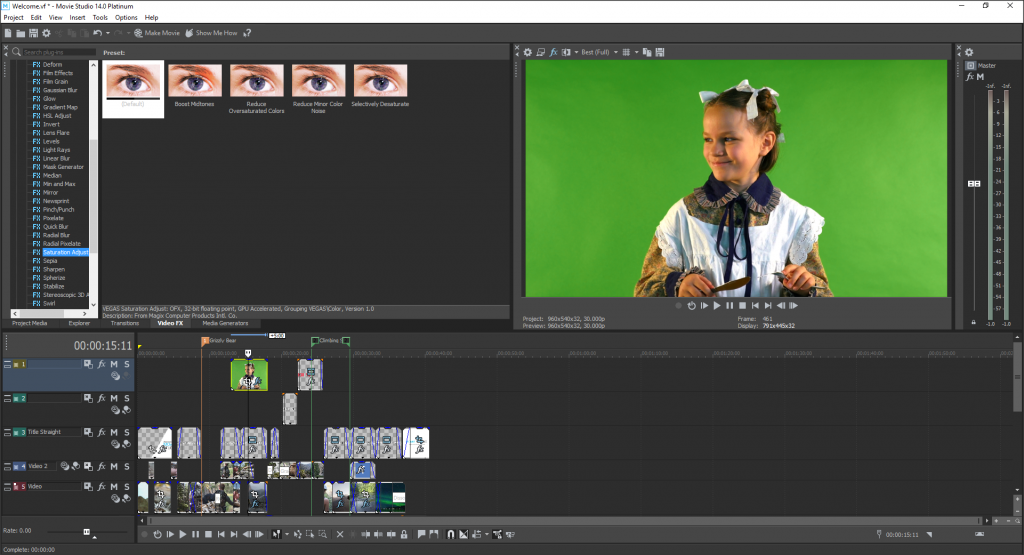 Firstly, I have to say that Magix have to be congratulated on their support and learning tools. These come in the form of basic but tip-filled online video tutorials. They are well made and give enough practical information to get a new user cutting in Vegas Movie Studio right off the bat.

The software then provides on-going support via three interactive learning tools which enable editors to learn about the software’s capabilities on the go. “What’s This” and “Interactive Tutorials” give you quick answers to explain the more complex functions while the exhaustive “Program Help” should have an answer to any more complex questions that come up during the editing process.

It is great to know these learning tools are available, but just how intuitive is the software? The interface has been updated since version 13 and looks simpler and more stylish, which is a good start. The dark colour scheme and design theme works better, and the overall aesthetic of the UI feels much more modern.

The Project, Timeline and Preview windows are more clearly laid out and – most noticeably – some major changes to the Track Header have made it easier to monitor and control the tracks in the Timeline.

The buttons and icons in the Toolbars are relatively self explanatory but detailed pop up info windows appear when you hover over them so the button functions are very easy to learn as you edit. The dropdown menus are also much simpler than in previous versions, with functions grouped well under specific menu items.

As with all such software, there is a learning curve and you do tend to get out as much as you put into it, so some time dedicated to delving into the available Transitions, Effects and Title options certainly pays off in the long-run. That said, the capable learning tools are there to support you and utilising these while messing about and actually making some stuff is a great way to learn. 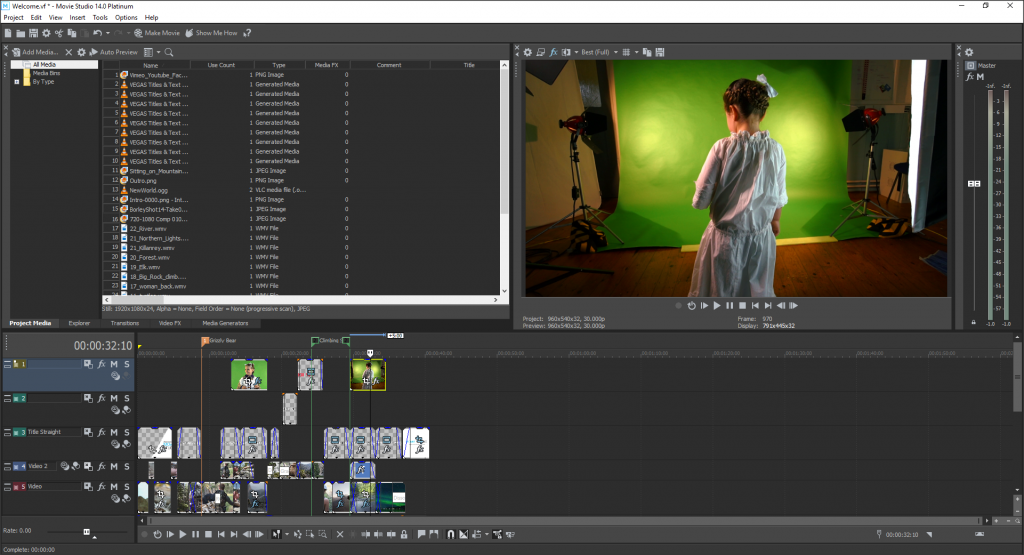 In the Project window the Transitions, Video FX and Media Generator tabs are really nice with hover-over demos of the effects that quickly help you find the creative look you are after, and there are lots of options! In fact that was one of the pleasant surprises about the Vegas Studio software, in that it comes with such a capable set of Video FX and Transitions, which a newbie should have lots of fun experimenting with.

This version 14 update also brings some key performance improvements such as quicker loading times for large projects, and I’m pleased to report that I didn’t have a single crash while putting it through its paces, which was a first for me with Vegas. In fact, I was able to cut a short but resource-heavy video in 4K and export it as a 1080p MP4 without any issues. Admittedly my PC is very powerful and has 32GB of RAM but even so this is a vast improvement over previous versions.

It also has much improved RAM preview so Timelines play quicker and more smoothly as you edit, speeding up your workflow and making Vegas much more fun to use. There is also a new multicam editing option which, while it’s not something the average user might need, it’s a nice to have for people cutting two camera interviews or multi camera event videos, even though you still need to synch the videos using the audio waveforms which is a bit of a pain.

Vegas Movie Studio also now offers direct upload to YouTube, Facebook and Vimeo which speeds things up for delivering video for web streaming or Vloging regularly, which is a nice touch and likely to be a popular feature. When combined with the increased Timeline tracks available and the addition of NewBlue FX and Titler Pro plugins plus HitFilm Toolkit, SmartSound Sonicfire Pro 6 and Music Maker, Vegas Movie Studio 14 Platinum looks like a very easy to use, solidly designed and creative package, specially considering the £69.99/$79.99 price point which makes it vastly more affordable than any professional-level industry alternative. So, in answer to the question of whether they managed to turn out a product that hits that elusive “prosumer” market, I believe they might just have.

This is a guest review post by Tom Atkinson from R3Digital. Images are from his latest production in partnership with Carrion Films, the highly anticipated gothic horror masterpiece Borley Rectory starring Reece Shearsmith and narrated by Julian Sands.