Tech Trends checks out the AR Bose Frames as we wrap up our coverage of the South by Southwest 2019 festival in Austin.

This year, they are back at that same Rainy Street bar to continue the story and share what progress they’ve made over the past 12 months. The current Frames were released in January and are described by Bose as “the world’s first audio augmented reality platform.” Like sunglasses, they block up to 99% of UVA/UVB rays and feature uniformly-tinted lenses. 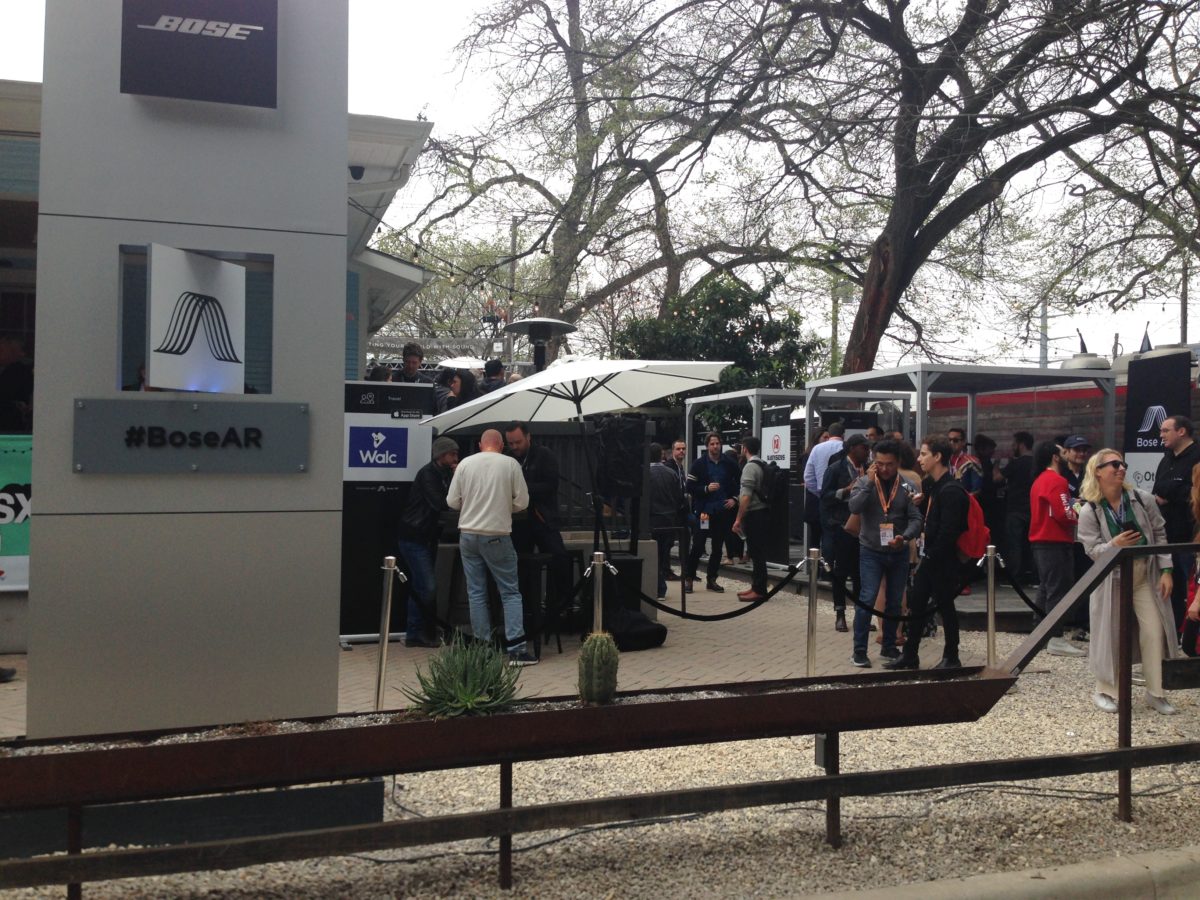 But this is where the similarities with regular sunglasses end: For starters, they have “a minuscule, wafer-thin acoustic package” that is “set seamlessly in each arm’s interior — rather than an earbud.” This allows for “discreet” personal listening. They are made with Augmented Sound technology, there is no visual element. It augments your sound experience because “it knows where you are and what you’re facing using a 9-axis head motion sensor and the GPS from your iOS or Android device.” Using that data, it “automatically adds a layer of audio, connecting that place and time.”

This sense of sound, orientation and place can be used for a variety of situations. That’s part of what brought Bose to SXSW.  According to their representative “one of the reasons we’re here at South by is there’s a really great community of content creators and developers that we want to talk to and see how we can best support the development efforts.” 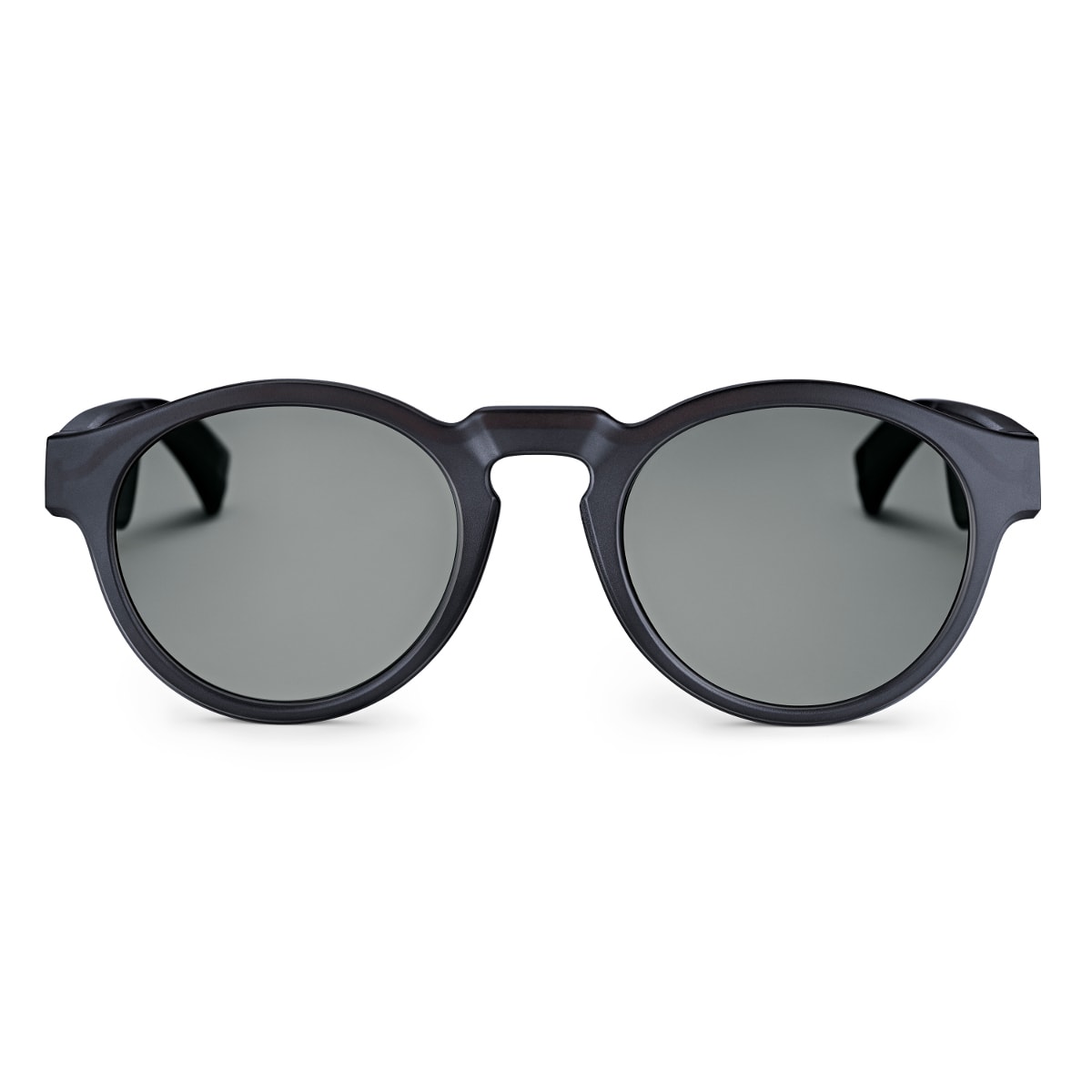 The sunglasses work nicely as headphones. They tap on or off. The sound is quite discreet. It is not a bone conduction system, as some may have assumed. The representative explains “one of the troubles with bone conduction is that you don’t really get a great quality sound.” This system is “a totally proprietary acoustic system that’s actually taking a real speaker driver and playing music no differently than a speaker would through this port, using these geometry supports to cancel it in the far field.”

When you put the glasses on “you’re getting a full volume speaker into your ear but then 99 percent of that gets canceled by the time it reaches the outside of your ear. ” The end result is that you can hear your sound, as well as sounds from the outside world, but other people can’t hear your sound. So no one knows what music, or questionable audiobook, you’re listening to. 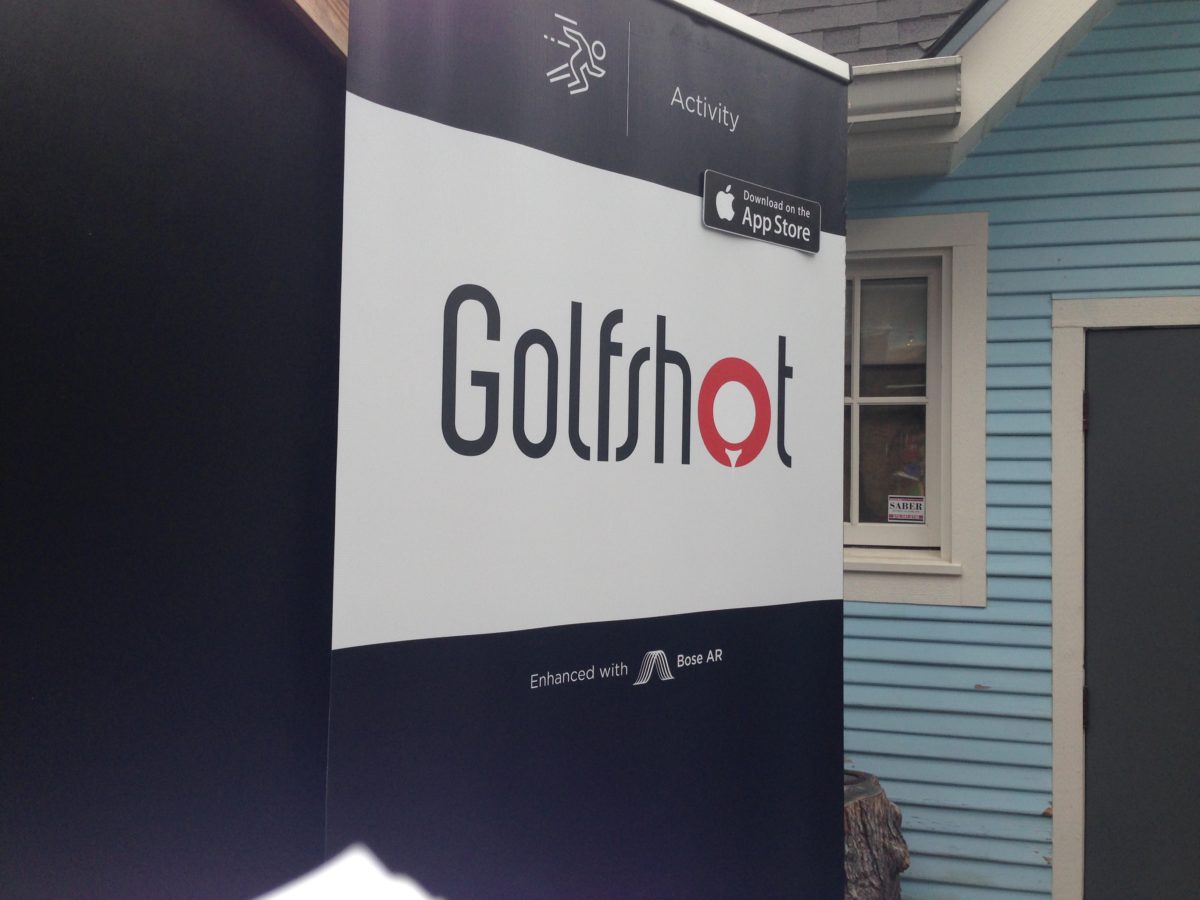 Golfshot, an app that helps golfers with on-course GPS, scoring, statistics, and tee times, is here at this event to show how their app uses Bose Frames. John, the lead native developer of Golfshot, explains: “Bose actually reached out to us, they had some developers who used our product and they just thought it would be a good integration so they contacted us and we went from there.”

One aspect of their app is providing GPS data for the golf courses. Normally, you’d have to take out your phone, a forbidden act on some courses, but “with Bose AR you just keep it in your pocket and tap on your frames from anywhere on the course and contextually, based on where you are in your GPS location, we give you whatever information you need.” You can get course data without getting out your phone, or getting in trouble. 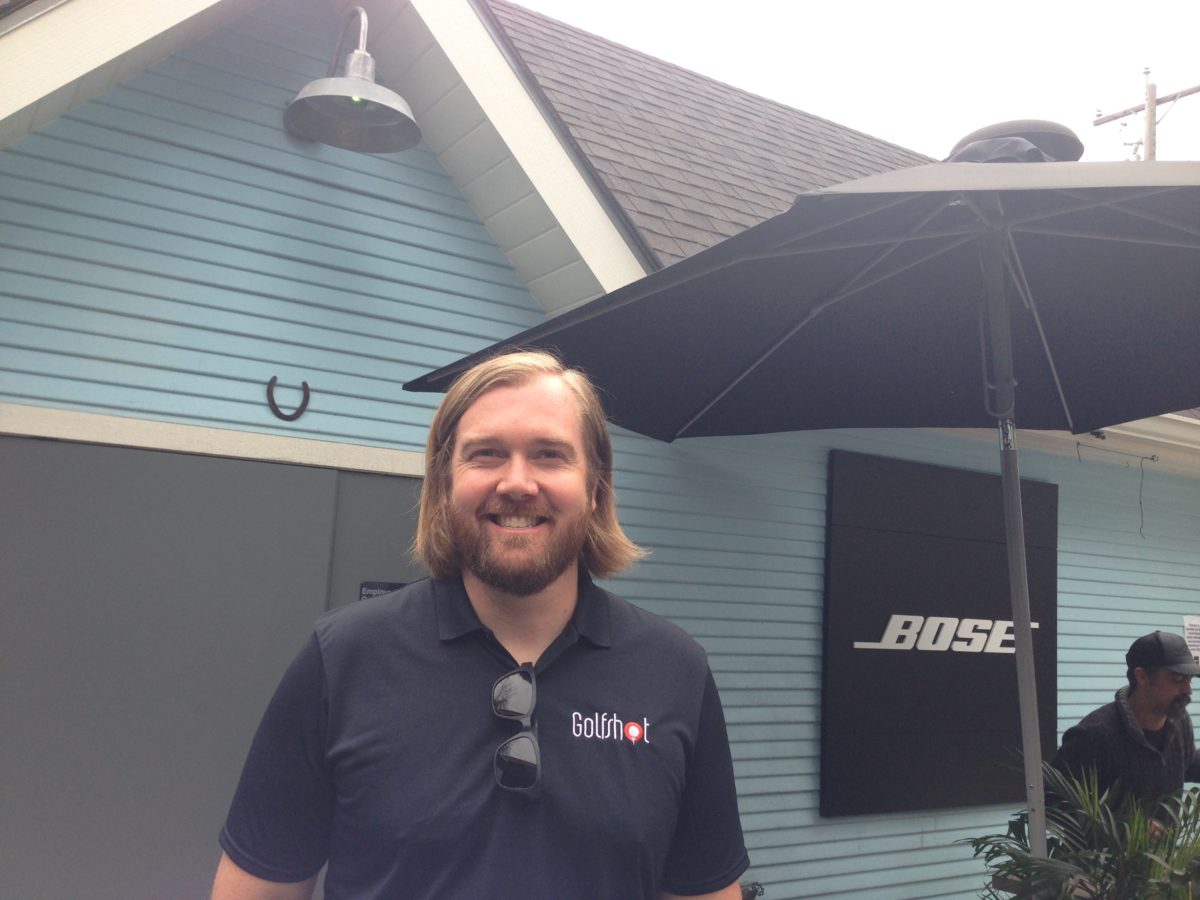 In the future, they’d like to utilize “the compass information” that the glasses can collect. John explains that “sometimes you’re teeing off and you have trees in your way or a different elevation, you don’t know if you want to pull to this or the other side of the fairway and that can make a big difference in the golfer’s game.”

Normally you’d have to get in your cart and drive out to see then return, “ but, with this, we can just project your visual out with the glasses and find the green for you, or you can see it on your mobile device, but if you don’t want to pull out your phone you can just double tap your frames.” 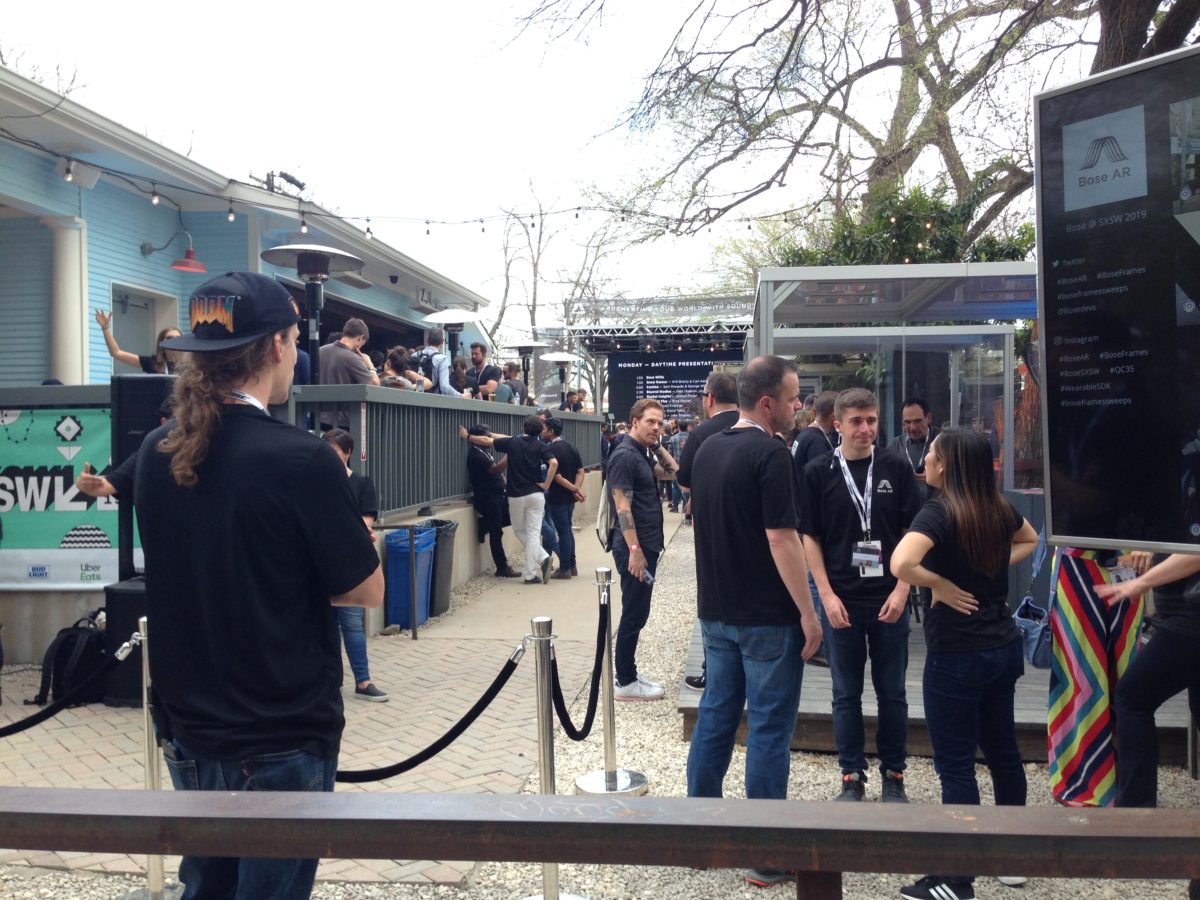 The way that the current app works is by using “3D audio cues so if you double tap you get a ringing in your ear. It’s almost like a radar system and as soon as you find the green it will go to a solid tone, and then you know, okay, I need to hit over to this side.”  With the glasses, you can turn your head one way, listen to the beeping, and keep turning your head till the solid sound lets you know you are facing the right way.

@GolfshotGPS is just one possible use case for the Frames. It should be interesting seeing what the future holds for Augmented Reality and sound Click To Tweet