If Virtual Reality Demos were a game of Bingo, I’d be shouting out and waving my card in the air.

The PlayStation VR was the last of the major HMDs (Head Mounted Displays for the less geeky amongst us) that I hadn’t yet tried, so it was with titillation that I unpacked the box that contained my loan from Sony this week.

There was, understandably, quite a long wait to get that loan, however, so by now there are many (MANY) in-depth reviews available on the web, done by people with quite a bit more time to play games than I can manage these days. So if you’re after one of those knit-picking, dissecting accounts full of technical minutiae, you won’t find it here. This is a brief account of my experience, from the perspective of a VR fangirl.

I won’t compare the PlayStation VR to mobile headsets such as the Samsung Gear, Daydream or even Cardboard, nor to the Microsoft HoloLens, as mobile VR and Augmented/Mixed reality provide quite different types of experiences. The PlayStation VR sits in the same category as the HTC VIVE and the Oculus Rift – powerful, tethered devices that have to be connected to a powerful computer via a cable.

One of the key selling points of the PSVR is that if you’ve already got a PS4 console it retails for about half the price of those equivalent headsets. The other – after having tried it on – is that it is by far the most comfortable of those. After playing a broad range of games, demos and experiences on the headset, I never felt discomfort from actually wearing it, and it was very easy to adjust accurately to fit around my head. I was also extremely impressed by the high resolution of the display.

We're still a long way from being able to comfortably play long, intensive games in VR Click To Tweet

But although I felt no discomfort from physically wearing the headset, the intensity of the experience made it very difficult to play games – specially fast-paced ones – for any length of time. 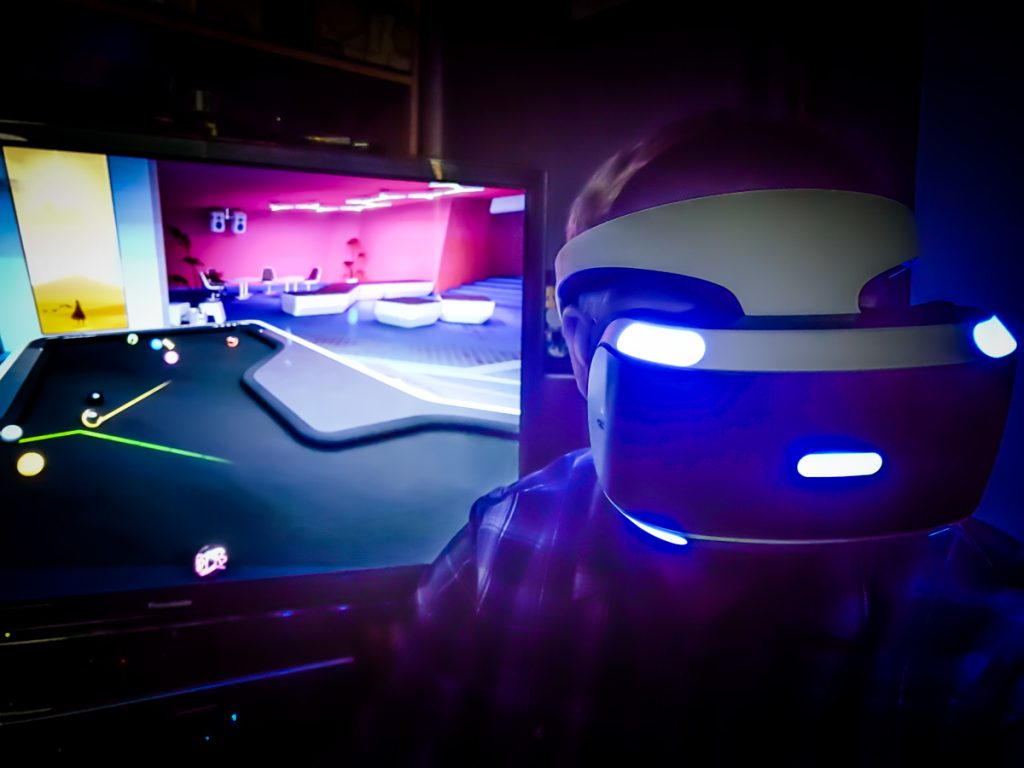 Being a snooker fan, my husband insisted I tried on Hustle Kings, and I have to say that – even though it’s absolutely not my bag – I was rather surprised by how much I enjoyed just hanging out in that hall, listening to the naff music that somehow always manages to get itself stuck in my head. It goes to show that in VR, it is often the ordinary experiences that turn out to be the most pleasurable and addictive.

I’m a huge fan of Resident Evil, and was very much looking forward to playing Resident Evil 7 Biohazard in VR, but I couldn’t last more than 10-15 minutes at a time before having to take quite long breaks to settle my queasy stomach. Now, I should caveat that I am very sensitive to simulator sickness, so it is entirely possible that other people might last much longer, but from what I heard, we’re still a long way off from being able to play long games such as RE7 entirely in VR.

OMG OMG OMG I just got my PlayStation #VR on loan and Resident Evil 7 is arriving on Amazon Prime tomorrow. Not soon enough goddammit!!!! pic.twitter.com/FWzjFvqlDM

The biggest thrill is to step into your favourite game, just stop and stare Click To Tweet

Yet the biggest thrill is still to step into your favourite game, and just stop and stare. And it’s exactly in these open world, sandbox-type experiences – such as you get in games like The Last of Us – that VR in its current form becomes most enjoyable. Eventually, as features such as frame rate, graphics processing and resolution continue to improve, the discomfort I felt is also likely to become less of an issue. It is important to remember, after all, that all of these devices are first-generation headsets. But judging by what I’ve seen so far, we’ve got a long and bright road ahead.