Love them or hate them, there’s no doubt that memes are here to stay.

Composing a good meme is a mixture of art and science, but this infographic published by Mashable dives into some of the key ingredients that many successful memes share. 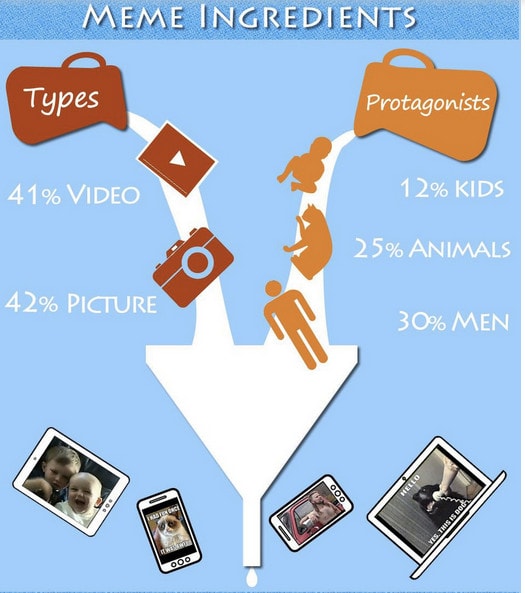 But if you think that these whimsical marriages of clever words and opportunist imagery are a digital-only phenomenon, well, think again. Getting your Meme to go viral online is one thing. Seeing it materialize in the real world, however, has to count as an extra achievement unlocked. And that’s what is increasingly happening, with people and companies printing their favourite memes as stickers.

And that’s what one of Canada’s fastest-growing companies is dedicated to catering to. StickerYou recently opened a store in Toronto to complement its thriving online business proviving custom stickers for individuals and businesses of all sizes. StickerYou’s Founder and President Andrew Witkin says that memes are some of their most popular sticker themes, and that this fun element is a big part of what draws people to stickers, and why they often become collectible items.

“People have always collected stickers, but the difference these days, of course, is that technology gives people and small brands not only great content like memes to play with, but also the chance to produce customized stickers much more easily. The design tools are intuitive and you can test the ground with a small batch to start with,” he explains.

Many artists and designers are now turning to stickers as a way of extending the creative reach of their work, which makes sense given the way that our virtual an digital worlds are increasingly blending together, not least due to XR technologies that blur those boundaries between atoms and bits every day.

One of those artists is Ricardo Cavolo, an illustrator native to Salamanca, Spain, who has recently developed a special edition of the iconic blue Chiquita banana stickers. You can see the artist at work in the video below, appropriately using a Virtual Reality headset and Tilt Brush to go about creating the stickers that make liberal use of flamboyant colours, vivid imagery, and graffiti/pop art iconography, as well as Cavolo’s emblematic symbol of a heart with flames, which he says is a representation of the power that lies within all of us to overcome adversity.

Luggage brand RIMOWA has also recently launched a range of stickers inspired by sustainability entitled “A collection of stone, lava, meteorite, ice, driftwood, and lichen stickers.” This came about as a result of the collaboration between Olafur Eliasson’s Little Sun Foundation, a non-profit organization with a mission to deliver solar energy to the most vulnerable communities worldwide. Only 500 stickers were made in numbered units packaged in eco-friendly boxes and became available to purchase online on December 3rd, as well as at select RIMOWA retailers.

And RIMOWA is certainly not alone. Many big brands are capitalizing on the social and collectible nature of stickers as a medium to engage fickle fans.

According to a recent article in the Guardian, branded stickers are now among the fashion industry’s most sought-after items, as consumers eagerly slap them onto their laptops and other possessions to convey not only affinity with a label, but to reflect their own tastes and personalities. In other words, it signifies you’re part of a subculture.

Skateboard brand Palace for instance, released a sticker pack that sold out within an hour, and rare versions were reselling online for hundreds of dollars soon after. Other examples include stickers of the classic Calvin Klein Jeans image of Brooke Shields (you know the one) and fashion brand Coach which has produced leather stickers, while Berlin-based magazine o32c published a sticker sheet from Louis Vuitton’s creative director, Virgil Abloh.

Electronic musician James Lavelle says there is something about the tactile nature of stickers that gives them an authentic vibe as opposed to a massive digital marketing campaign, which can often feel rather impersonal.

“There’s been a surge of interest in streetwear lately and stickers are a core part of those cultures,” says Alex Powis co-founder of Stickerarchive, an online collection of popular graphics. He compares stickers to a form of coded messaging that lets people know what tribe you belong to.

Maybe one of the reasons I’ve always liked stickers is because mixing and matching – or even deciding where to place them –  lets you be creative without having to possess outstanding artistic talents of your own. I’m OK with the fact that my skills do not extend to drawing (pray you never get paired up with me on a game of Pictionary) but that doesn’t mean I don’t enjoy visual artistic expression. Stickers are very democratic. Literally anyone can join in the fun on an equal footing.

I am, in fact, writing this on a laptop covered with stickers I bought or collected at various places I visited, conferences I attended, or places I can’t even remember. But the stickers are still here, and long may they endure.