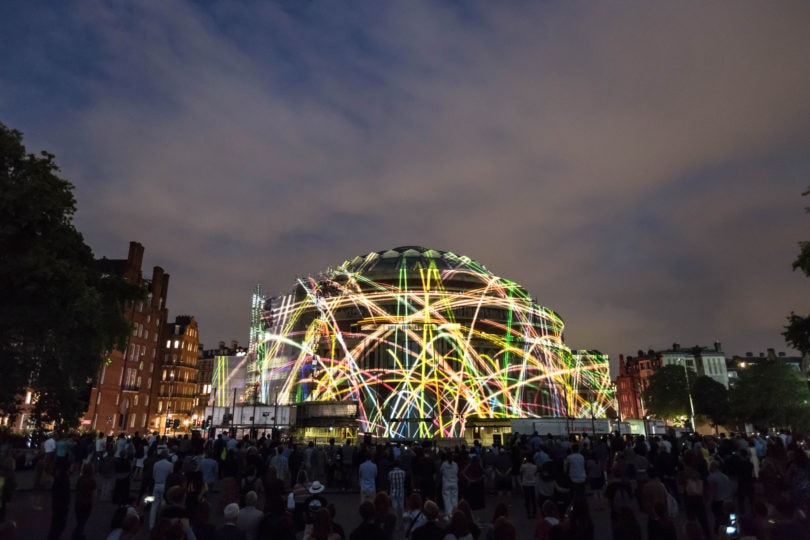 This summer for the first time, the BBC Proms are holding an event in virtual reality. Produced by BBC VR Hub, Nothing to be Written commemorates the centenary of the First World War and was created by composer Anna Meredith and 59 productions – the Tony Award-winning company of artists behind the video design of the Opening Ceremony of the London 2012 Olympic Games.

This summer for the first time, the BBC Proms are holding an event in virtual reality Click To Tweet

The experience conveys the atmosphere of hallways across the United Kingdom during that time, when families and friends waited quietly for news while violence raged in the trenches. It was developed primarily for Oculus Go and will be available on public release to other major VR and BBC platforms later this year.

Produced by BBC VR Hub, Nothing to be Written commemorates the centenary of the First World War Click To Tweet

The music featured in this 25-minute experience was recorded live on the First Night of the Proms, and captured in spatialised sound with high quality ambisonics. This new work for orchestra, choir and projections explores the varied forms of communication from the front lines. Its second movement, entitled ‘Field Postcard’, forms the basis of the VR experience, drawing on the talents of both the BBC Proms Youth Ensemble and the National Youth Choir of Great Britain, alongside the BBC Symphony Orchestra under the baton of their chief conductor, Sakari Oramo.

“To me, it mirrors the music I wrote by allowing you to experience the texture both at a distance or really zooming into the detail of the Field Postcards and the stories they tell beyond the prescribed text,” says Composers Anna Meredith.

The project helps to bring some of the lesser-known stories and history of the Great War to life, while enabling viewers to see and hear the BBC Proms in a new way. It comes in two iterations: Nothing to be Written – a seven-minute immersive experience inspired by one of the First World War’s primary communication modes, the ‘field postcard’; and a from ‘within’ the Royal Albert Hall.

The project helps to bring some of the lesser-known stories and history of the Great War to life, while enabling viewers to see and hear the BBC Proms in a new way Click To Tweet

As the music plays, the walls and geometry of the building morph and change.  “You find yourself alone in this spectacular space. There is a reverent hush alive with possibility. The space feels real, but heightened. As the music begins, the hall begins to transform in response to the music,” comments Lysander Ashton, Director of 59 Productions. The architecture around you shifts and changes, becoming a canvas on which the music is painted.”

“Five Telegrams has already been seen by thousands of people at live events in London and Edinburgh and hundreds of thousands more on television and online. I am delighted that this latest VR incarnation will reach even wider audiences and add a further ground-breaking development to the project,” says BBC Proms Director David Pickard.

Over 300,000 censored letters were sent each day from the front lines during the height of World War 1. During the war, censorship of mail meant that soldiers had few ways to regularly correspond with their loved ones at home. ‘Field postcards’, for example, offered soldiers the chance to quickly communicate their status, but at the cost of detail. “I am quite well”, “I have been admitted into hospital”, “I have received no letter from you” – for many, these stock phrases were their only regular link between families at home and soldiers on the Frontline.

Virtual Reality is the most exciting new technology in media today, and we’re using it to give viewers a new perspective on music and art with the BBC Proms Click To Tweet

Nothing to be Written takes the viewer on a highly emotive journey, positioning them as the main protagonist in the narrative: civilians transported on the same journey fared by their loved-ones during World War I. The piece merges two worlds – the hallways across the country with families and friends waiting for news, with the unrestrained violence of the front.

“Virtual Reality is the most exciting new technology in media today, and we’re using it to give viewers a new perspective on music and art with the BBC Proms. The experience helps the viewer understand the terrible gap between families at home and soldiers on the front line by putting them right at the heart of it. Anna’s beautiful, haunting music accompanies the viewers as they gain a greater understanding of the stark realities of life on the front line a century ago, and the painful pragmatism of the field postcard forcing interactions with loved ones into an expedient but heart-breaking tick box exercise,” says Zillah Watson, Commissioning Editor, BBC VR Hub.

The music featured in this 25-minute experience was recorded live on the First Night of the Proms, and captured in spatialised sound with high quality ambisonics Click To Tweet

“It’s always fascinating exploring the possibilities of VR, as a nascent medium, which seems to invite a mixture of filmic and theatrical approaches,” adds Ashton.

Nothing to be Written will have its world premiere at the BBC Proms on Tuesday 21st August. It then travels to 14-18 NOW (the UK’s arts programme for the First World War centenary) – linked events throughout the Autumn, followed by an international premiere at Raindance Film Festival.

You Can Now Watch The BBC Proms Music Festival In VR via @alicebonasio https://t.co/5rOhlWsJZn pic.twitter.com/NV8kwO5wsX