We’ve seen a lot of folks jumping onto the 360 video bandwagon in the past year as commercial platforms like YouTube have started to support the format natively. What’s interesting about the Fifty Shades Darker experience that was release this week, however, is that – unlike most film-based “companion pieces,” which come across very much as an afterthought – Universal dedicated some impressive resources to it, involving over 200 actors and incorporating the VR element into the film’s production.

To do this, they partnered up with 5th Wall, a creative studio and agency specializing in the production of Virtual and Augmented reality videos. 360 videos are generally created by recording footage with multiple cameras simultaneously and then “stitching” it in post production to create that familiar “surround” effect where the viewer is free to look anywhere inside that scene, as opposed to having their gaze guided by the director’s choice of shot.

Chris Olimpo, Creative Director at 5th Wall explains that they were keen to bring the mythology of the Fifty Shades trilogy to life so that fans could literally step into that world. What initially inspired them to do the ballroom scene was the moment in the film’s teaser trailer where Christian Grey puts on a mask for the ball: “We thought: “Wait a second! That kind of looks like someone putting on a VR headset. What if we invited all the fans of this film franchise to “put on their mask,” in the form of a VR headset, and step into the film?”

Shooting in VR is inherently different, he explains. Whereas in a regular film shoot looking directly at the camera is a big no-no, with a 360 setup the camera becomes just another person in the room, and the actors were instructed to not be afraid to look at it, acknowledge its presence, and engage directly with it. They coordinated the ball’s choreography with the crew, filmmakers, the full principal cast and over 200 extras. In a bit to minimize the already challenging post-production demands, they looked for ways of crafting the sequence movements along the stitchlines.

“Everything that was done, was done to make the audience feel as though the world of Fifty Shades was real. This wasn’t a film set. This was a real place – a place where you attended the Masquerade Ball. That’s where the power of the medium is its most powerful, true immersion,” says Olimpo.

They used the Nokia OZO camera to capture stereoscopic VR footage together with a binaural microphone to capture the ambient sound space. The idea is that if you close your eyes you can tell (or rather, feel) where Christian Grey is speaking to you from.

5th Wall integrated their work with the actual film production, which meant they had the luxury of using the actual film sets, but also the challenges of making it fit around an existing busy production schedule. “Within four hours, we had to set our camera, rehearse the scene with the cast and extras and then shoot the scene. It was only possible because of the buy-in and help of the studio, the actors, the producers and directors,” explains Olimpo. The biggest challenge, however, came during the post-production phase where the team had to spend months analysing every frame and painstakingly removing every crew member and every piece of equipment from shot. In 360 video, there’s literally nowhere to hide since you’re filming all around you. 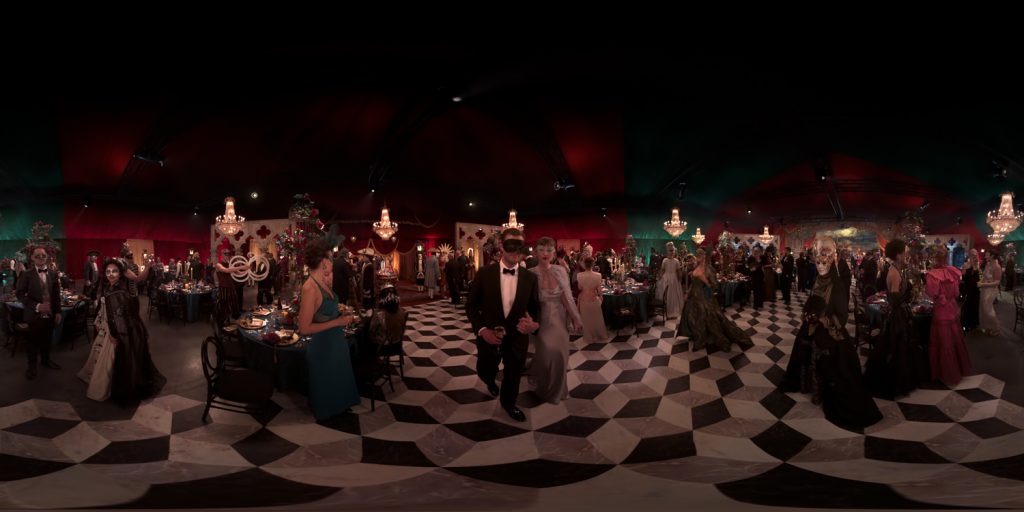 Fifty Shades director James Foley was definitely sold on the transformative nature of VR in storytelling after seeing the shoot and the resulting experience: “My own personal instinct is that cinema is going to move to VR because it’s an extension of the visual language. For myself, watching the material they generated expanded my brain,” he said.

“At Sundance, Universal Pictures saw it as important to see the reactions of the fans. We watched them put on the headset and escape to the Masquerade Ball. And every time Christian Grey would lock eyes with them, acknowledging their presence, they would laugh and blush. You couldn’t ask for a better reaction,” adds Olimpo.

In addition to going to the ball, fans will also have the chance to explore Christian Grey’s apartment by using a ‘floating motion’ navigation (as opposed to the usual mechanism you see in applications such as Google Maps) which 5th Wall used to connect four of the film’s sets into the 360 apartment experience.

The videos were released to coincide with the film’s Valentines day premiere, but hopefully we’re still in time to capture the romantic mood. You can join the almost 900,000 people who already viewed the video on YouTube (nearly 3 million on Facebook) by checking out the video below, or if you have the Samsung Gear VR you can also embark on the Masquerade Ball experience or visit Christian Grey’s Apartment in all their glory.

Cinema is going to move to VR because it’s an extension of the visual language Click To Tweet
And in case you’re wondering whether this is Safe for Work viewing – fear not – it’s all rather sleek and classy, for the kinky stuff you have to buy a ticket.