Industrial collaboration tools are one of the fastest-developing areas for the Microsoft HoloLens, with many companies such as Object Theory looking for ways to diversify and broaden the market for Mixed Reality. On the other hand, selling this technology as an everyday working tool in places like construction sites, offshore facilities and mining projects means making it robust enough to be used as such, which means it has to comply with very specific and stringent safety and environmental standards.

Which is how Microsoft finds itself in the somewhat unlikely position of endorsing a hard hat. They have been working with Trimble to come up with a design – complete with MSA V-Gard hard hat, suspension system and quick-release accessory clips – which allows workers to wear the HoloLens comfortably without voiding the warranty of the $3000 device.

It also meets basic impact protection requirements of ANSI Z87.1, CSA Z94.3 and EN 166 (the most common protective glass certification standards) and IP50 rated testing, meaning the device will be able to perform as dust protected. And while that might not sound like the sexiest list of features, it seems to have got this construction crew excited enough:

As they point out in the video, these workers already routinely use technology such as tablets to access plans and data on site, but going from 2D to 3D at scale brings that to a whole new level. “Superimposing the digital model on the physical environment provides a clear understanding of the relations between the 3D design model and the actual work on a jobsite,” explained Olivier Pellegrin, BIM manager, GA Smart Building.

The application they are using is called Trimble Connect. It turns data into 3D holograms, which are then mapped out to scale onto the real-world environment. It gives workers an instant sense of where and how various elements will fit in best, and exposes mistakes early on in the process.

Trimble Connect turns data into 3D holograms, which are then mapped out to scale onto the real-world environment Click To Tweet

It does that by combining multiple models – structural, mechanical, electrical – and aligning each one precisely on a 1:1 scale onto the job site structures. This means workers can review and make changes to the models in context with the physical environment they’ll be applied to. It can be used not only to plan work more efficiently, but to train workers and compare plans against tasks completed. Other features enable users to view and capture data with onsite measuring tools, make annotations, and assign tasks. 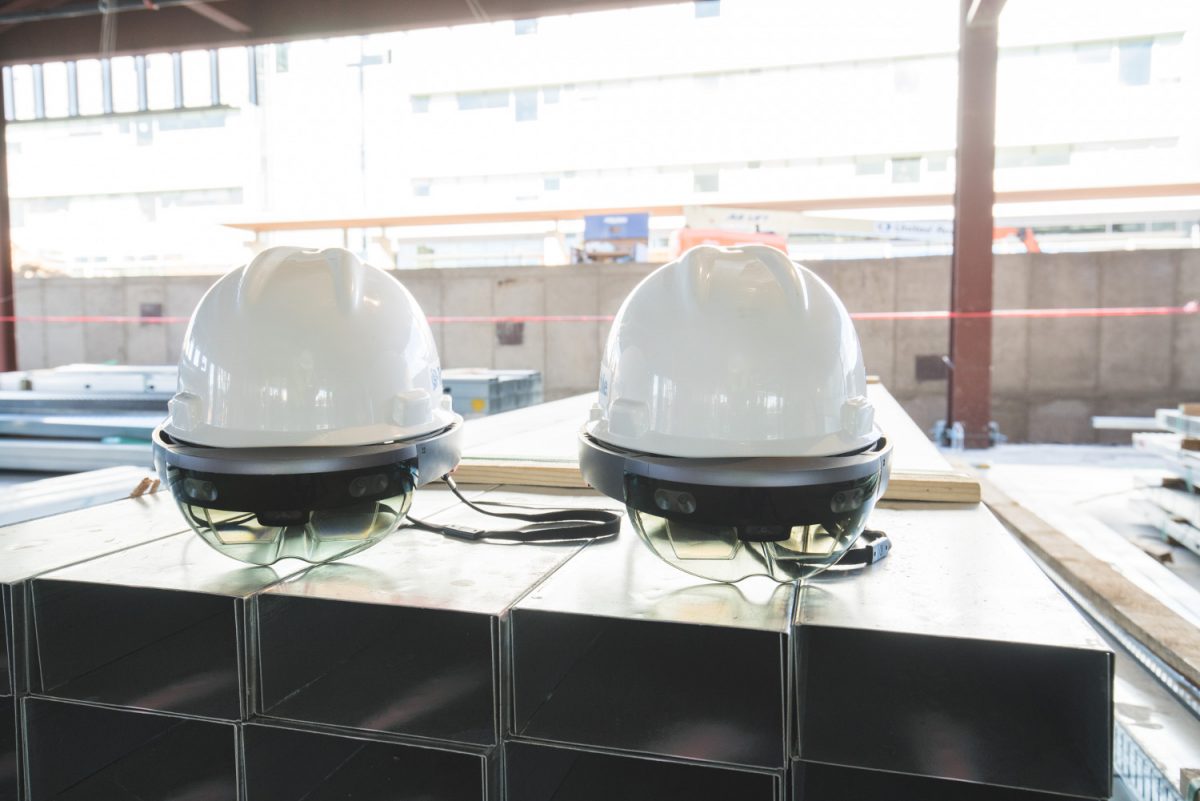 Trimble – a California-based company that specializes in advanced location-based technology – was one of the first HoloLens partners that Microsoft onboarded back in 2015. Later that year, Trimble company launched its Mixed Reality program and released the first commercially available enterprise-level product for the device – called SketchUp Viewer – in partnership with multinational engineering firm AECOM.

With Trimble Connect – which is available now on the Microsoft Windows App Store with a free trial option – users will be able to not only use the functionality in training scenarios, but also visualize and share holographic data to collaborate in projects and manage tasks such as quality control and progress monitoring.

“We are expanding the opportunities for implementation of Mixed Reality in a broad range of industries,” says Aviad Almagor, director of Trimble’s Mixed-Reality Program. “With the rise in acceptance for mixed-reality solutions in business, the need for 3D visualization outside the office is driving this next wave of innovation.”

The Hard Hat Solution, which is expected to be released later in the first quarter of 2018, will – excuse the pun – build upon what has been Microsoft’s HoloLens strategy from the very start, which has been to focus on enabling Industry 4.0 efficiencies and capturing the lion’s share of the enterprise market.

Which is not to say that they are ignoring the average user, however, as the new wave of Windows Mixed Reality headsets proves. These HMDs incorporate many of the features the company developed for the HoloLens, such as inside-out tracking capabilities, which make them a lot more comfortable to wear and brings the tech a step closer to looking like a viable consumer proposition. It does mean, however, that Microsoft can afford to play the long game as far as mass-market adoption goes, and that’s a pretty nice place for it to be, specially as we start to anticipate what the next generation of the HoloLens will look like, and how it will compare with other newcomers in that space like Magic Leap.

This is what a #MixedReality hard hat looks like https://t.co/CaF1rE6SwQ

Tech Trends’  Virtual Reality Consultancy services offers support for companies looking to get a foothold in the growing Mixed Reality spectrum and enhance their brand strategy with immersive technologies.