Two odd gadgets this month, one for cleaning up sh*t and one that just was!

First up is the PetSafe ScoopFree Self-Cleaning Litter box. Cleaning out a filthy litter tray was one of my least favorite childhood chores. Back then the best you could hope for from your litter tray was that it contained the unspeakable byproducts and that the sawdust dried things out enough that manual cleaning wasn’t quite as slimy as it might otherwise be. The smell remained unchanged.

The PetSafe ScoopFree Original Self-Cleaning Cat Litter Box is an automatic litter box that stays fresh and clean without the hassle of scooping. Simply plug in the box and watch it work. The automatic rake system sweeps waste into the covered compartment 20 minutes after your cat uses the litter box. 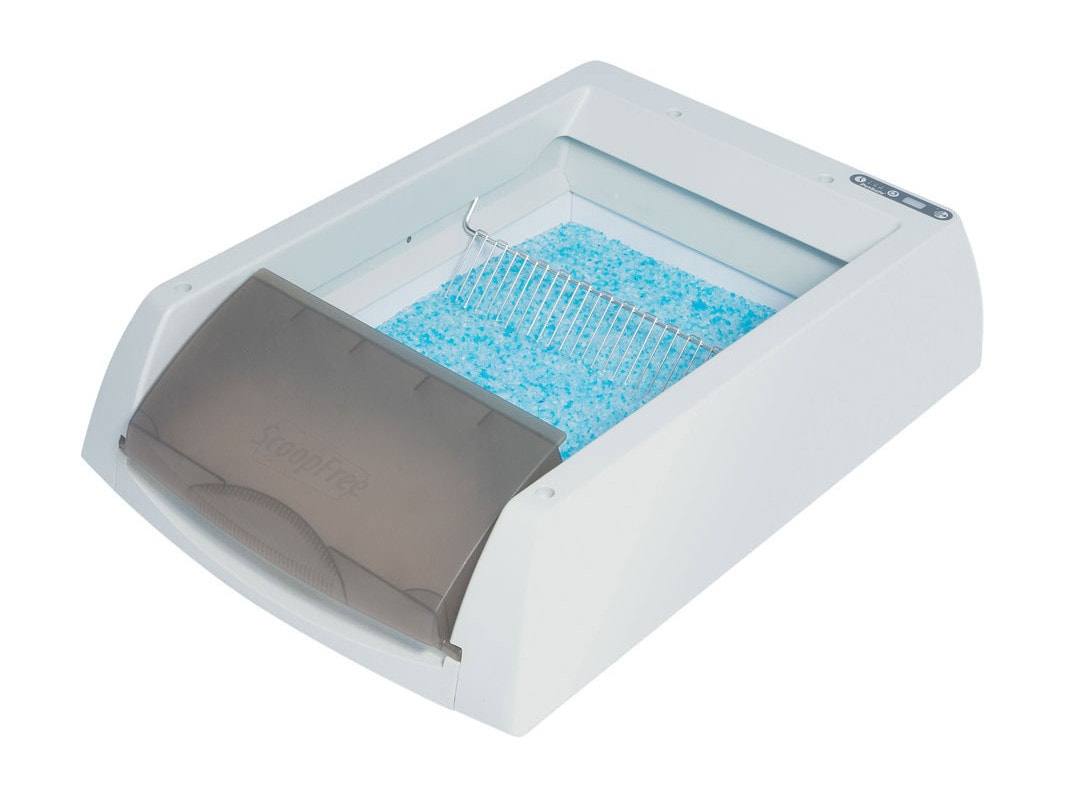 The key claims of this ScoopFree tray are:

So how did it do in the Tech Trends trials? Well, we had to farm the testing out to a friend due to the fact we have dogs not cats but reports were mixed. Training a cat is a bit of a job but re-training a cat to use a new system when it has been used to an older fashioned tray for years is, well, a task of special proportions. The fun our colleagues had transitioning their aging moggy to the new tray will not be part of this review but be warned, factor this work into your plans! However, once acclimatized to the new whizzy electric tray from PetSafe the cat and the owners enjoyed most of the claimed benefits. 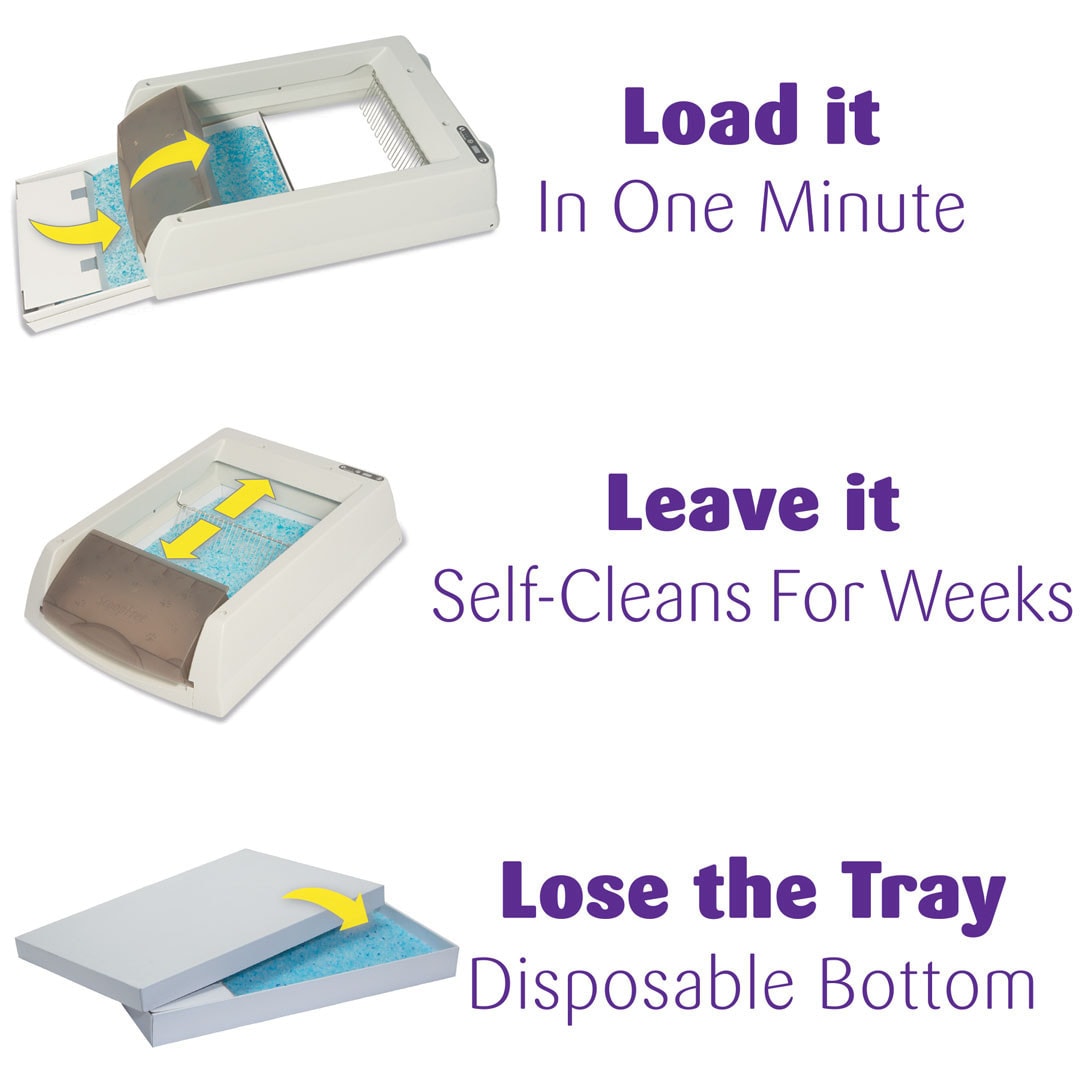 The special crystal cat litter, packed in a convenient disposable litter tray, is 5 times more effective at reducing odor than clay or clumping cat litters. Your cat will always have a clean, fresh-smelling litter box, and you’ll enjoy a home that’s effortlessly odor-free.

The auto rake worked like a charm and made a noticeable difference to the smell. It didn’t eliminate the smell but having the poop swept into a compartment rather than sit out in the open and pong definitely made being around the cat litter tray-less unpleasant. A few minutes after the deposit has been made and the crystals have had a chance to suck out most of the moisture the rake activates and sweeps the waste into a small contained section of the tray, out of sight and almost out of small. The rake worked as advertised and only got a bit icky when the cat’s poop was not as solid as it should be. Then it only really moved the mess around rather than tidying it away and then needed cleaning itself. However, this can’t really be a criticism of the design just a point to make, the poop rake is good but not a solve all design.

The crystals were also a general success, keeping the smell down and not tracking around the room. They are pretty absorbent but cats are creatures of habit and tend to wee in the same part of the tray, day after day, overwhelming the crystals powers to absorb the pool. It is now that we found the built-in plastic coating on the replaceable cardboard trays doesn’t hold up well to cat claws so we definitely advise you to stir the tray every day or two to avoid pooling as our only real design issue with the PetSafe Scoop-Free tray occurred when we did not do this.

The crystals were also a general success, keeping the smell down and not tracking around the room Click To Tweet

Our testing moggies liked to claw around the tray a bit before depositing their little gifts resulting in holes in the plastic coating. If the tray is not stirred and when liquid pools in one place it can soak through to the cardboard making the tray wet and soggy. If you replace the tray every week or two this is not a huge deal but any longer and it can get rather smelly and floppy and be a pain to remove and replace. Our testers said the crystal litter was as good as any other brand they had tried so this is just a bit of a weakness in the sealing of the cardboard trays. 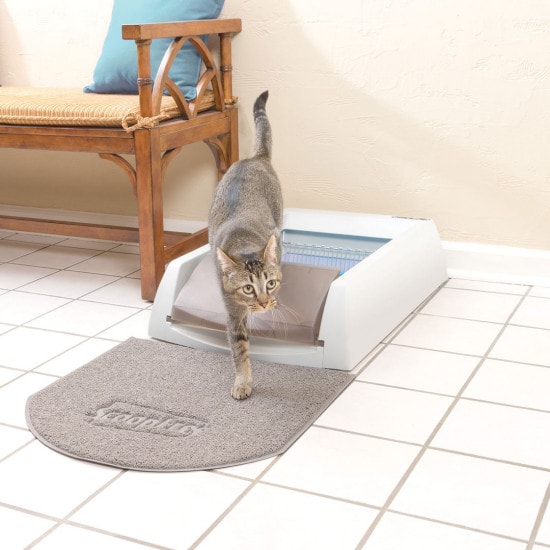 The price of these trays might be a problem for some users and the frequency with which they need replacing will be entirely dependent on the personal habits and quantity of your cats. My childhood small, red, plastic litter tray was a very economical buy and lasted the lifetime of our two cats but did need scrapping out and hand washing every week but the convenience gained by this new automated system from PetSafe will come at the cost of just under $100 per six new trays. You must bear this cost in mind going forwards and weigh it against your squeamishness when handling poopy litter in an old fashioned tray.

All in all, this is a well designed and functional self-cleaning litter tray under normal circumstances and worked well with a little light maintenance but as tends to be the issue with all modern tech products the cost involved can become uncomfortable. Apart from the sealing on the trays we have no major complaints so weigh up the costs and benefits and if you decide to make the leap PetSafe ScoopFree Self-Cleaning litter trays are available here for just $144.99.

These are very nice looking earbuds and claim high sound quality, great battery life and bass to remember. These are promises I have heard before from every headphone manufacturer but I live in hope of it all being true so was very happy to receive a pair of these True Wireless 5.0 BT Earbuds to review. Little did I know how much fun reviewing the cat litter tray would be compared to these trendy little gadgets. My first impression was that the charging case is damn ugly but the earbuds themselves are very nice looking and that’s what counts. I charged them up and went to hook them up to my smartphone to feed them some high-quality Flac and Wav based tunes.

Qualcomm® aptX™ audio is an industry leading technology that ensures you receive the highest possible sound quality from your Bluetooth® device. Experience low latency CD-like quality audio on any mobile device whenever and wherever you choose with HELM True Wireless 5.0 with aptX™ audio.

Well, it did not go well. Each separate earbud showed up in the phone’s BT settings and pairing with one or the other resulted in the depressing realization that I could listen to Johnny Cash in one ear or the other but not both. Okay… I looked a little closer into the Android 10 BT settings and was pleased to see I could connect to two BT devices at the same time and stream them both the same signal, woohoo, problem solved, well… no. Now I got the same song in both ears but out of synch by one second or so. 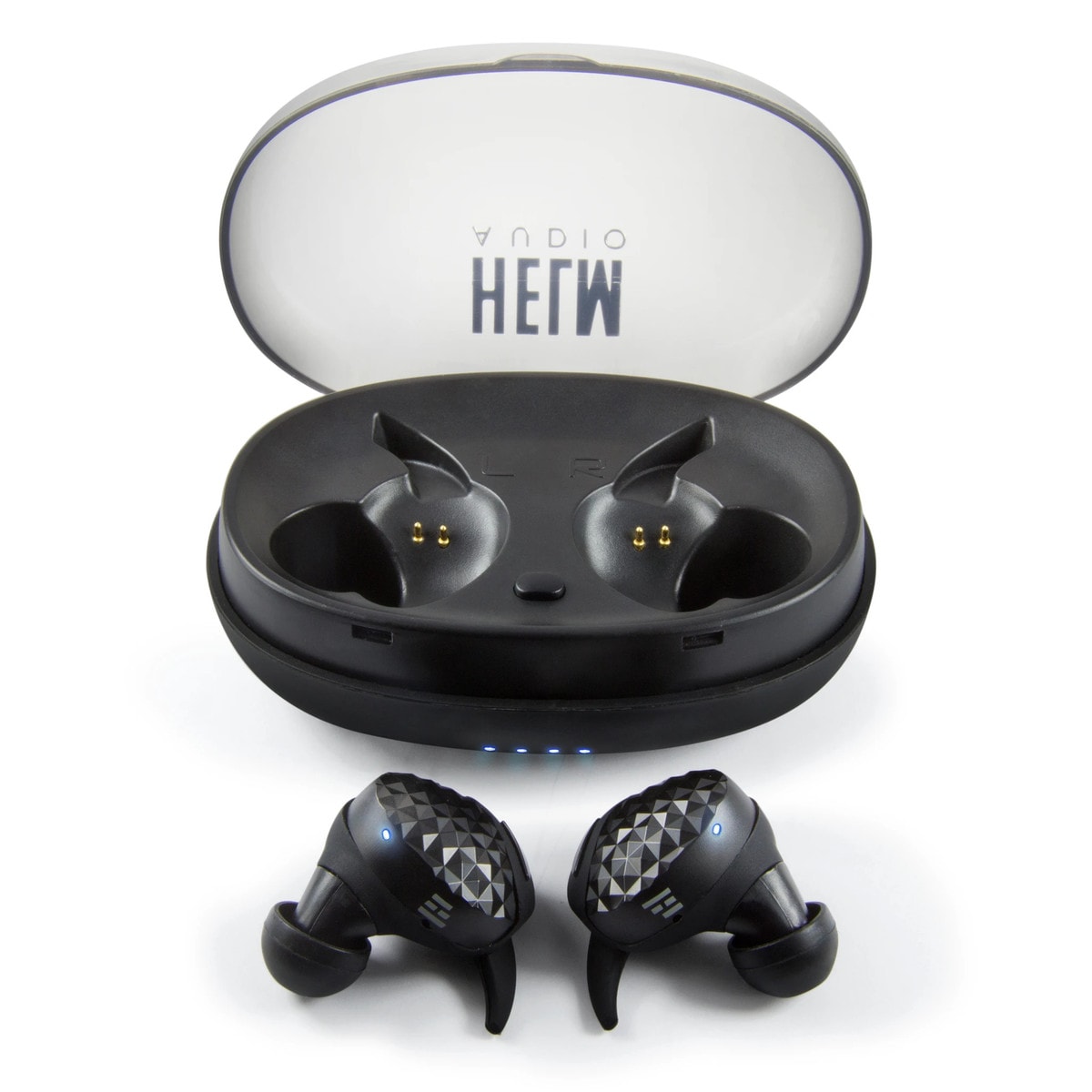 Hmmm time to read the instructions, stupid man, it must be my fault. Indeed, the instructions detail how to pair the earbuds to each other before you connect them to your phone. I tried rather unintuitive procedure described but to no avail. Despite these issues, the buds are a great fit in the ear and I can see why they are popular with athletes as once they are inserted they gain a very snug, almost vacuum-like seal that keeps them in your head while effectively blocking out the noisy world around you. They are the best fitting earbuds I have tried to date, no doubt.

Sadly I still had no music from my Samsung Galaxy phone. Yes, both earbuds showed a blue light so they must be connected right? The instructions say to connect the phone to just the Left one in your settings and it should work in both, right? No! Let’s reset them as per the instructions and try again. No! I got 2 seconds of music in both ears then back to just the Left one working.

Simple auto-pairing with Bluetooth 5.0 pairs to any current Bluetooth enabled device. Simply remove the earpieces from the portable charging case to sync and pair with your device seamlessly, and our HELIX antenna will keep you connected up to 60 feet. 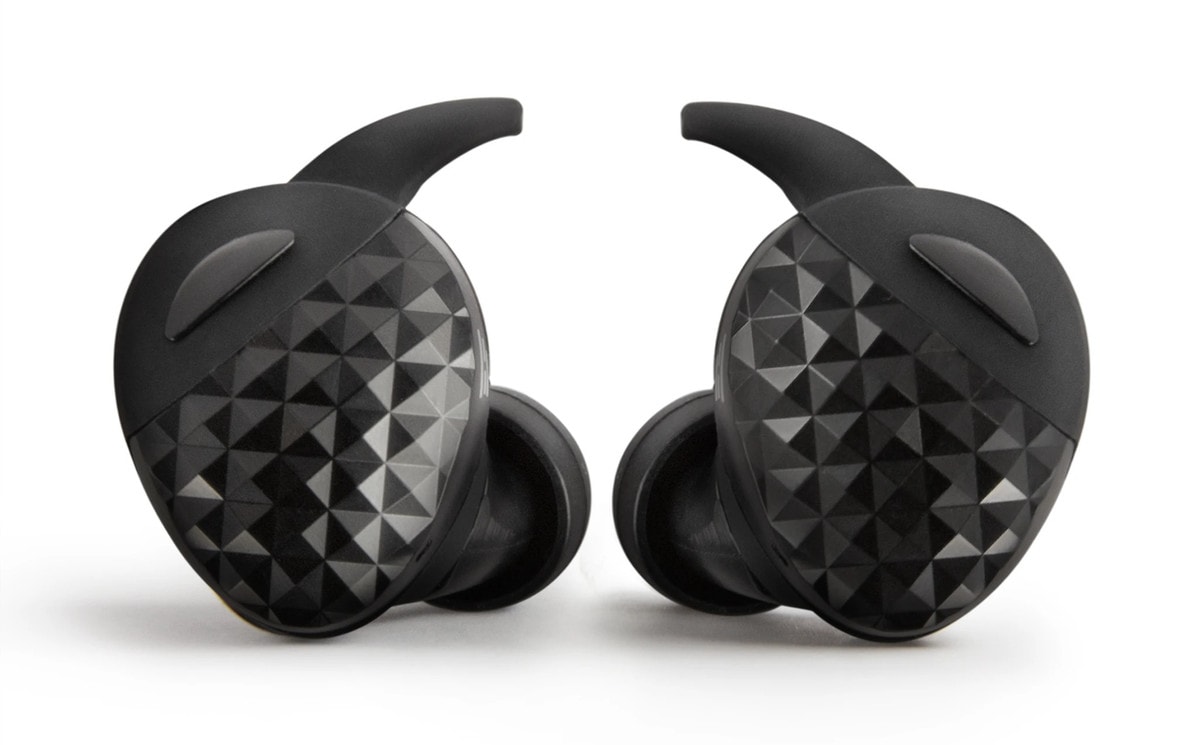 I really wanted to get the damn things going so I put them back in the case again, reset them again and tried the whole, overly complex set up and pair procedure one more time Click To Tweet

At this point, I was tempted to chuck them in the bin as nothing, in this day and age, should be this complicated and if it costs over $129 it should just work. This is not new technology and there is no excuse but I really wanted to get the damn things going so I put them back in the case again, reset them again and tried the whole, overly complex set up and pair procedure one more time. This time I restarted my phone and reset the earbuds and went along with the instructions plus I even tried some different music but only the left earbud worked so after testing them on a second handset with the same results in the bin they went. In their defense, they worked very well when paired with my MacBook Air and sounded great. I can only assume I received a faulty pair which is a real shame. If you want to try them out, they are available for $129.99 here.