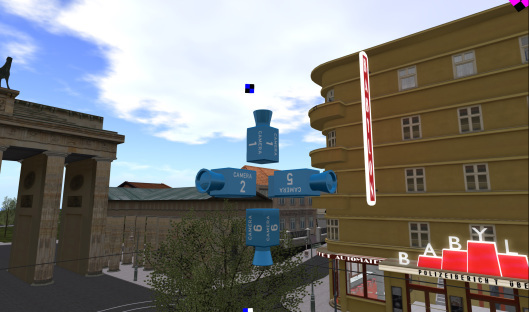 I take a look at a bold experiment which takes 360-video footage shot in Second Life (the massive virtual environment created by Linden Lab) and projects it in real-time onto Microsoft’s Hololens.

This shows the amazing possibilities that are opening up for user-generated content in the VR arena, and for seamlessly blending the real and virtual worlds Click To Tweet

Admittedly, at first glance the HoloLens video featured above might not look like mind-blowing stuff, but this isn’t about the quality of the visuals. Instead, this is about where the images are coming from, how they were generated, and where they’re being projected.

Jim Reichert, a former Senior Creative Technologist at Microsoft, flagged this up to me as he’s a huge fan of Second Life, an online, multiplayer social virtual world, and was excited when last week the first 360 video footage was recorded in the SL Metaverse, featuring Jo Yardley’s authentic rebuild of 1920s Berlin.

This is effectively a proof-of-concept for how easy it will become to make user-generated content for both VR, AR and Mixed Reality in the future Click To Tweet

Since Jim’s role at Microsoft involved overseeing ‘next gen experiences’ (one of the coolest job titles I have ever heard of), he wanted to check out how this footage would look when projected onto HoloLens. As this was a quick pilot, he decided to lower the resolution and frame rate so he could iterate it faster, hence the rough-and-ready look.

The result you see in the test at the top of this article is therefore 360-degree footage, which had been recorded live in a virtual environment (Second Life) and then projected back onto the augmented reality (AR) gear, superimposing it, in real time, with the real-world background of Jim’s office. And if that doesn’t make your head hurt just a little bit, you’re not doing it right. The possibilities it raises are tantalizing.

This is effectively a proof-of-concept for how easy it will become to make user-generated content for both VR, AR and Mixed Reality in the future.  The SL film shows a train pulling into the 1920s Berlin station, which is a direct reference to the first-ever movie – Arrival of a Train at La Ciotat – by the Lumière Brothers.

The in-world footage was shot by Draxtor Despres, Phil Toma and Arduenn Schwartzmann using a simulated goPro Rig of 6 cameras, and they say that the workflow of filming, exporting, stitching and correcting that 360 footage from Second Life was actually faster than doing so in real life.

I see a lot of wonderful learning coming out of the Second Life residents, not just Linden Lab Click To Tweet

That opens up all sorts of possibilities for users to create their own content, as they would be able to use this technique to insert virtual sequences into live-action 360 video without having to painstakingly construct it element-by-element with CGI. The advantage of Second Life is that all the assets are already in place, so you can effectively film in real time. There is still a need to use a render engine, but that is no different than filming 360 video in the real world, which evens out the playing field.

Second Life creators, Linden Lab, are currently busy developing their dedicated Virtual Reality platform Project Sansar, which is set to launch to the public next January, and will also focus heavily on user-generated content. Yet this goes to show that, far from being obsolete, SL still has a few neat tricks up its sleeve. With a track record of over 13 years of creating virtual experiences, the Metaverse is the granddaddy of Virtual Reality, and it still provides an important creative outlet to an engaged community of more than a million users.

“I see a lot of wonderful learning coming out of the Second Life residents, not just Linden Lab,” says Reichert.  “Even today, there’s no better place for artists and scientists working at the fringe of what is possible. It’s time for people to give Second Life a second look.”

This article originally appeared on UploadVR

You need to see the @HoloLens project a 360-video into the “real world”.
via @alicebonasio @LindenLab @SecondLife https://t.co/Z7Fx01Lre4