Why extended Reality (xR) is an Effective Tool for Environmental Health and Safety Training: A Brain Science Analysis.

A critical function in nearly all industrial and manufacturing settings is to provide high-quality and effective training in environmental health and safety (EHS). Although one might argue that EHS is not the most exciting or engaging topic, a strong understanding of EHS guidelines and most importantly an ability to ACT quickly and effectively under ANY CONDITIONS, including high stress and pressure, can be the difference between a smooth-running operation with only minor safety issues, and an environmental disaster.

The terms “act” and “any conditions” are emphasized for a reason. It is one thing to know “what” to do, to have the cognitive ability to verbalize the EHS guidelines, and to pass a written compliance test, but it is another thing (and mediated by different learning and performance systems in the brain) to know “how” to do it, and to be able to perform those behaviors under any conditions, including under high stress or pressure (referred to as situational awareness). The ability to verbalize and pass written tests is important for communication and compliance concerns, but the ability to behave appropriately regardless of the level of chaos and stress, is often the difference between life and death.

In this brief report I show that extended reality (xR) technologies hold great promise for training behavior and situational awareness in EHS. xR technologies reduce the burden on cognitive systems whose processing is adversely affected by stress and pressure, provide the opportunity for limitless behavioral practice in virtual or real-world settings, and speed learning and retention by broadly engaging multiple learning systems in the brain in synchrony.

Brain Science of Learning in EHS

The key to xR technologies for training is that they are experience-based. As Albert Einstein so eloquently stated

“Learning is an experience. Everything else is just information” 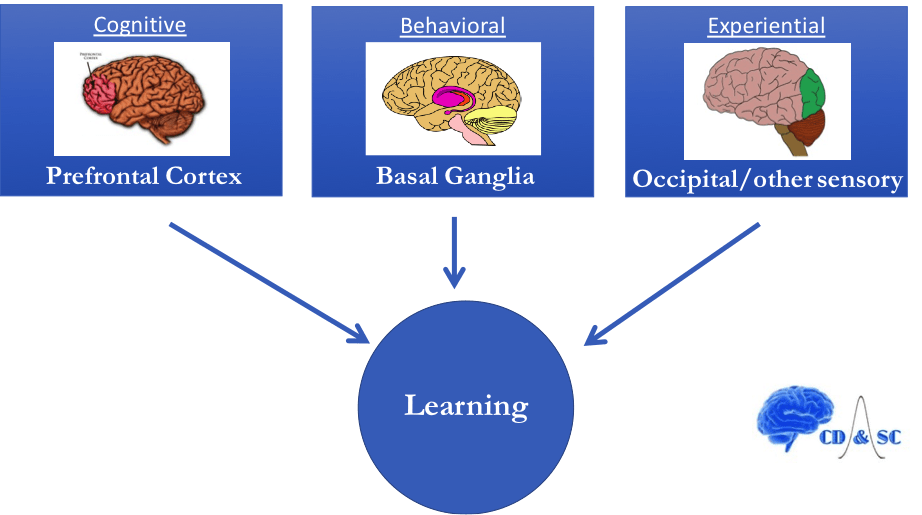 The behavioral skills learning system in the brain has evolved to learn behaviors. It is one thing to know what to do, but it is completely different to know how to do it. Knowing the safety rules and regulations is completely different from knowing how to initiate those behaviors in an emergency. Memorizing the location of the fire equipment and the steps to take to use it is completely different from being able to take the shortest path to the equipment and quickly and accurately engaging the equipment in fighting a fire. Behavioral skills are learned by doing. Processing in this system is optimized when behavior is interactive and is followed in real-time (literally within milliseconds) by corrective feedback. Behaviors that are rewarded will be more likely to occur in the future, and behaviors that are punished will be less likely to occur in the future. Interestingly, this system does not rely on working memory and attention, and “overthinking it” hinders behavioral skills learning. Behavioral skill learning is mediated by the basal ganglia and gradual, incremental dopamine-mediated changes in behavior. The ultimate goal of this system is to train direct neural connections between sensory regions and motor regions in the brain that drive behavior.

One advantage of VR is that you can be transported into any situation, including chaotic situations in which you will need to make fast and accurate decisions under pressure Click To Tweet

The experiential learning system has evolved to represent the sensory aspects of an experience, whether visual, auditory, tactile or olfactory. Every experience is unique and adds rich context to cognitive and behavioral skills learning. Experiential learning (in combination with emotional learning systems; not displayed in the figure above) is the key to situational awareness. By training individuals under a broad array of setting including those that occur infrequently, those that involve chaotic and high-stress conditions, or those that require quick action, you are training the broad-based situational awareness that is critical in EHS. It is the nuance and unique aspects of an experience that lead to generalized learning and transfer from the specific training scenario to other related situations that develops situational awareness. The critical brain regions associated with experiential learning differ as a function of the sensory input. Visual representations are formed in the occipital lobes and auditory representations are formed in the temporal lobes. Tactile representations are formed in the parietal lobes and olfactory information is represented in the piriform cortex and olfactory bulb.

Some xR Applications in EHS

Suppose you work in a chemical plant with a large number of flammable chemicals. Should a fire break out, there are a number of steps that you must follow to contain the blaze. This includes:

To “learn” these steps you could read a manual with text and figures. This places a heavy load on working memory and attention to translate the abstract information into a visual representation of the steps you would need to take during a fire. Alternatively, you could read the manual and also watch a video that demonstrates the steps being taken by an actor or via animation. This is better because the experiential systems in your brain are being engaged to some degree. However, in both cases, you are likely sitting at a desk and are attempting to store this information in memory for use later during a real-world situation in which your and your co-worker’s safety is in jeopardy from a chemical fire.

Alternatively, suppose an AR tool, such as a Hololens, is used during training. You pick a random location on the factory floor, don the Hololens and start the AR fire training protocol. The system knows your location and tracks your movements. Using visual cues like colored arrows, you are directed to the fire suppression equipment via the shortest possible path. You are given step-by-step directions (verbally, visually, or both) on how to don the appropriate safety equipment, prepare the fire suppression equipment, and are then directed to the fire. Once at the fire, visual cues are provided that direct you on how to start the equipment. This whole process is timed, the system notes what steps you performed correctly and incorrectly, and all of this information is made available to you and your supervisor. In this case, you are “learning by doing” with step-by-step guidance and feedback being provided. You are not only gaining a cognitive understanding of the steps to take, but you are being trained simultaneously on the relevant behaviors. You can repeat this process periodically from different locations on the factory floor, and at some point, you can be tested without the AR cues.

An AR tool could also be used to provide general training on all of the safety equipment in the plant. You might don some AR glasses that direct you to predefined locations in the workplace. At each location, your view of the workplace is augmented with static text overlays or dynamic video that provides specific information on the safety guidelines or usage of safety tools. For specific safety equipment, you could receive step-by-step instructions or visual labels describing exactly how the equipment works. You might then be asked to demonstrate your skill with a specific safety tool, with or without text-based prompting and receive real-time feedback.

VR tools are also effective for EHS training. One advantage of VR is that you can be transported into any situation, including chaotic situations in which you will need to make fast and accurate decisions under pressure. For example, you might don a VR headset and be transported into the middle of a workplace emergency. You might scan your virtual environment watching personnel follow or fail to follow the guidelines within this chaotic situation while receiving auditory feedback on the appropriate actions. VR also allows you to experience rare, but potentially catastrophic situations, such as a chemical explosion or chemical spill.

In these AR and VR examples, there is minimal need to translate abstract text or figures into a visual representation because this information is being supplemented with experiential learning that is proximal and salient. Because multiple brain systems are active, the memory traces in each system are strong and interconnected. Behavioral learning will also occur when you demonstrate your skill with safety tools and receive feedback either with the AR tool, or in VR with haptic feedback incorporated. The applications of xR technology in EHS are many.