Sometimes great things come in small packages. This Mini LED Projector might be cheap but boy is it fun!

You can pay a packet for a home cinema projector. Remember the Sony VPL-VZ1000ES? Admittedly that is one of the finest short throw projectors out there, but it costs circa £20k ($28k), not including the Sony 4K Advanced SXRD screen… Well, what about the other end of the spectrum – cheap and functional?

Affordable tech accessory manufacturer DBPower specialise in giving you the most bang for your buck! I loved their budget 4K Action Camera. Their products are generally good quality for minimum cost so we were very keen to look at their RD-810, a budget yet flexible mini LED home cinema projector that boasts connections for HDMI, USB, VGA, AV RCA and supports 1080p from your device, be it a PC, Laptop, DVR TV Box, Chromecast, Amazon Fire Stick (both powered by the USB port), X-Box, Playstation or even a Smartphone. Now that is an impressive array of input options!

Affordable tech manufacturer DBPower specialise in giving you the most bang for your buck, and the RD-810 Mini LED projector is no exception Click To Tweet

If you need an affordable home theatre setup for films, gaming, sport or multimedia of any kind the RD-810 might be the solution. Now, it is important to note, it supports HD 1080p signals but only outputs 800X480 pixels with an aspect ratio of 16:9 and projection ratio of 1.4:1 so this is a standard definition (SD) projector. For true HD you will need to pay quite a bit more but for family use, this is just the ticket. This new RD-810 claims to have upgraded LED light technology for brighter and clearer images, an updated quieter fan system (now lower than 20db) and a larger maximum projected image size of 30-176″ which when combined with the throw distance of 1.5-5m sounds about right for most living rooms. 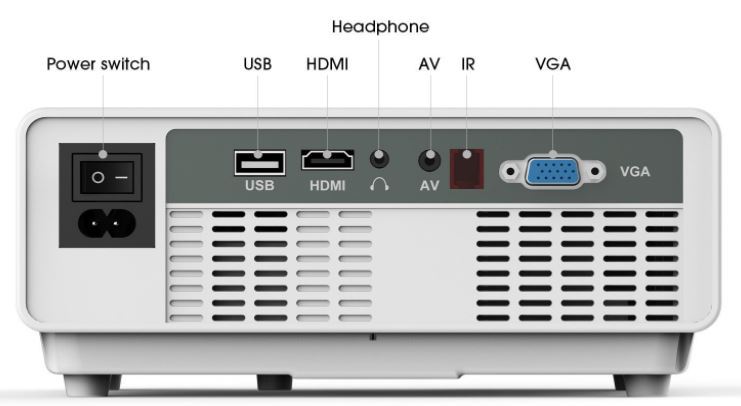 If you need an affordable home theatre setup for films, gaming, sport or multimedia of any kind the RD-810 might be the solution Click To Tweet

The RD-810 is a simple design and the build quality reflects the price but is not too bad. However, measuring 6 x 8.2 x 2.6 inches and weighing just 2.18 pounds it is very portable. There are four grippy feet, a ceiling mount connector on the base plus a simple height adjustment knob and it comes in Black or White. On the back panel, there is an impressive range of connections, including a USB port, a VGA port, an HDMI port, an AV RCA jack (adapter comes in the box), an infrared LED and a headphone jack. On a budget device this a spectacular range of options and means you can connect almost anything you might need. Imaging is via TFT LCD claiming a 10% boosted maximum brightness of 1500 lumens and contrast of 1000:1, these are not high specifications but are certainly powerful enough for your average user in a dark room, although definitely not bright enough to use in a lit room.

On a budget device, this is a spectacular range of options and means you can connect and project almost anything you might need Click To Tweet

You can’t expect much picture quality at this price but I hooked up my PS4 via HDMI, and bingo! It just worked (as we say in the trade)! The image was downscaled from HD but looked bright and colourful and playing Hustle Kings was great fun on such a large screen. The easy-to-use Keystone correction helped me get the angle of the screen right for my projector height and the only real drawback was the fan. It might be quieter than the previous version but you will absolutely need to run the audio through a separate system to get enough volume to drown it out – that’s easily done though. The headphone jack can be connected to an external amp or speaker for more volume and improved sound, the RD-810’s single speaker’s sound is pretty basic, as you would expect, but follow my headphone out advice and you need never hear it. I tried a movie (stereo) via USB and the picture was again better than I expected with no real lag and lovely colours. 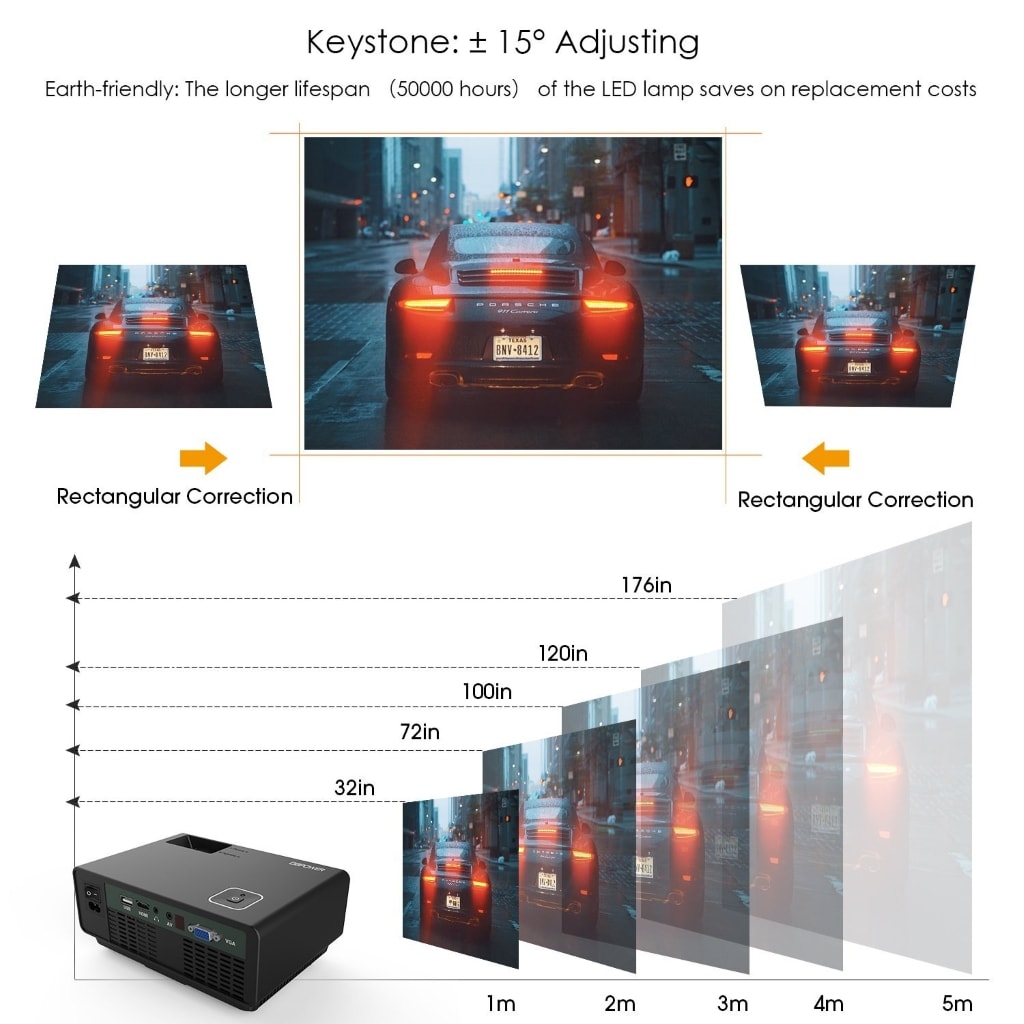 The remote is cheap-looking but does the job perfectly (which is all you need) and I know I will go back and try the RD-810 out for a full film soon.However, we did hit a snag when we looked at the audio options: If you are playing a movie off a USB stick then the sound is coming via the USB but the RD-810 doesn’t support Dolby Digital so those movie files will not have sound. Stereo files will be fine and the solution is simply to play Dolby files via a secondary player like a laptop or a Blu-Ray that can convert Dolby to a Stereo output. This adds a layer of complexity but for any movie buff, it is not much of a challenge.

You can set it up in your living room for the evening, then stow it away in a cupboard due to its small size or even suspend it from the ceiling or mount it on a tripod using the mounting thread Click To Tweet

Yes the picture quality is not HD and there is a bit of an issue with Dolby 5.1 audio tracks but for the price, this projector is amazingly flexible and fun to use. You can set it up in your living room for the evening, then stow it away in a cupboard due to its small size or even suspend it from the ceiling or mount it on a tripod using the mounting thread. It will connect to virtually anything and give you a good result, for this alone is worth recommending.