The other day I confess to feeling rather stressed. Deadlines were building up, noisy building works rattled all around me, and I was moving house the following week. That constant tight feeling in my chest couldn’t be healthy, I figured, so I decided to do something about it.

I remembered that a while back I was regularly using this site called calm which offered bite-size meditation sessions. You got to choose a soothing background, the length of time you wanted to spend (from 3 to 30 minutes) and off you went. Somehow those 5 minutes managed to make a real difference, I felt all my knotty muscles relax, my breathing was no longer shallow and painful, and I came close to nodding off a few times. I REALLY needed that. It was one of those days.

But when I arrived on the site and pressed the familiar “begin” button, it did not take me to my happy place. It led me to a ginormous list of unfamiliar meditation options, and nowhere could I see my 5-minute quick fix. In desperation, I clicked on the “emergency calm” option. Seemed appropriate. Unfortunately, that linked to a page telling me I had to subscribe to one of the premium packages in order to access it. That felt sadistic.

there’s a time, a place and a way to try and extract money from people, and this wasn’t it Click To Tweet

Now far be it from me to deny anybody their 30 pieces of silver, we’ve all got to make a living, I suppose, but frankly, there’s a time, a place and a way to try and extract money from people, and this wasn’t it.

This felt a bit like that episode of Black Books where Bill Bailey’s character Manny desperately seeks The Little Book of Calm to alleviate his panic attack (he ends up swallowing it to hilarious results, but I won’t spoil it in case you haven’t seen it yet)

Like Manny, I persisted, and eventually managed to find a few options which were still subscription-free. Bingo! Surely these were the original ones I remembered? I didn’t want anything fancy. No seven-day program, no “non judgment” meditation. Just my five minutes of mindfulness.

Finally, I spot it. Timed, guided meditations. I choose 5 minutes and prepare to be rescued. This is going to be good. I earned it. Soon, I will be hearing the familiar gentle voice… No I won’t. The British one has been replaced by an American.

Don’t get me wrong, I’ve got nothing against American voices, but as a rule, they are better suited for action rather than relaxation. Maybe that’s just me, but I had also got used to the other voice, and this felt like a final betrayal. 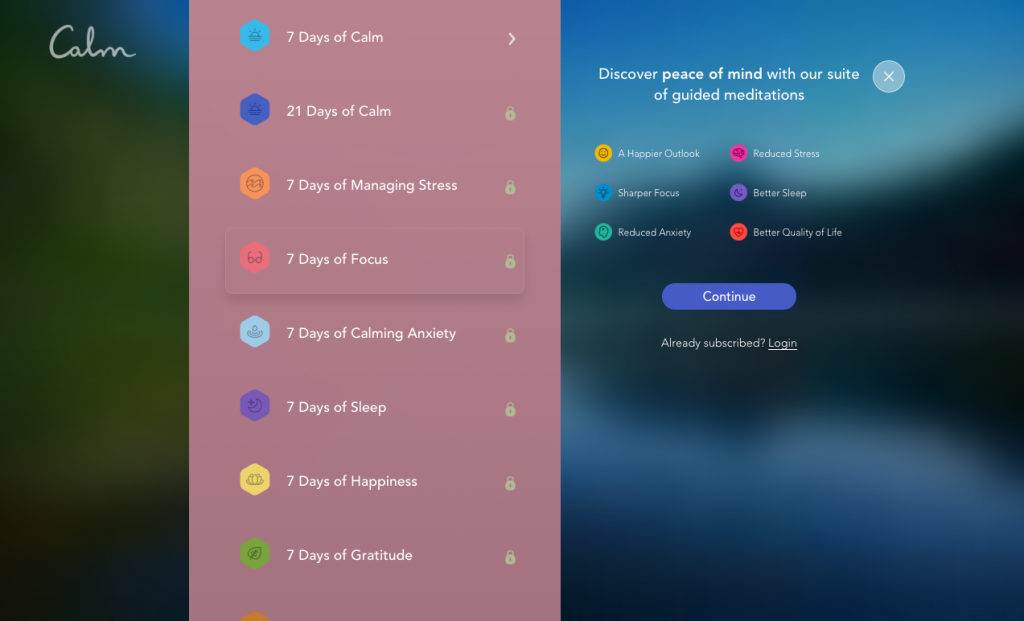 I skulked away, much more stressed than when I started. To me, this perfectly illustrates the pitfalls companies face when monetising their product. The very thing that people love most can become repulsive if you just randomly shove it behind a paywall. Managing user expectations and gently guiding them towards becoming paid subscribers is hard.

For better of for worse we’ve grown used to having things for free. Tech companies have to either find a way to make us love their product so much we naturally feel we should be paying for it, or they have to figure out how to use our data to make money – an equally unattractive option to many users as reaching into their pockets.

I don’t have an easy answer to that. If I did, I’d probably be much richer – and less stressed… In the meantime you could always try out some of these tips from Health Ambition on ways to relax, all of which take less than 5 minutes, so worth a go!

The Coronavirus pandemic has become a catalyst for us to embrace immersive technologies in our...

ThirdEye Gen believes its technology could help save lives during the coronavirus pandemic. The X2...

A new free web-based tool lets you track coronavirus contagion in real-time virustrack.live is an...