Forecast for immersive technologies like Augmented and Virtual Reality remains positive, but there has been some decline.

The latest forecast from technology analyst firm CCS Insight highlights some of the challenges facing makers of head-worn virtual and augmented reality devices. Despite early enthusiasm and a continued expectation of significant long-term potential for the technology, there is much work yet to be done on improving user experience, developing software platforms and – above all – making attractive content for those platforms available to consumers.

“We continue to believe that content is the key to unlocking adoption of VR. Although some games companies and adult content creators have embraced VR technology, much more needs to happen to persuade consumers that VR devices are a must-have item,” says Ben Wood, CCS Insight’s chief of research.

This sober yet positive message is the main conclusion of the company’s recently published global market report for VR and AR devices. In it, the research firm forecasts 8 million virtual reality (VR) and augmented reality (AR) headsets and glasses will be sold in 2018, down from 10 million in 2017, but growing to 14 million in 2019 and eventually to 52 million in 2022.

The market for VR has gone through several phases, according to Wood. “The first wave of consumers used basic cardboard viewers, which helped them understand the potential of the media, but the limited experience meant most people quickly lost interest. We don’t even include such devices in our forecast anymore”. He continues, “Attention then turned to smartphone-based devices such as the Samsung Gear VR and the Zeiss One Plus VR. These have played an important role in raising the awareness of the technology over the past three years, but interest in these devices has now waned”.

Accordingly, the firm’s forecast shows a dramatic drop in sales of smartphone VR devices, from nearly 8 million units in 2017 to fewer than 3 million this year. This decline has occurred despite heavy price cuts and extensive promotions over the past 12 months.

“We believe the device market has now shifted away from the early wave of cheaper, less-functional cardboard and plastic smartphone VR viewers. We expect the next wave of adoption to come from dedicated devices that offer a more compelling, wire-free experience,” Wood concludes.

CCS Insight believes the advent of standalone VR headsets – which overcome the awkwardness of being attached to a PC, smartphone or games console – will help to reinvigorate this product category both for consumers and businesses. Its forecast shows demand in that category growing over 16 times between 2018 and 2022, when 29 million standalone VR headsets are expected to be sold.

The company believes devices such as Facebook’s Oculus Go and Oculus Quest, which are being offered at retail prices of $200 and $400 respectively, are good examples of the future of VR. Wood also notes that the Chinese market is looking particularly promising and Facebook’s partnership with Xiaomi has helped those headsets make a strong start there.

There is still, however, a role to be played in this market by tethered devices like the Sony PlayStation VR, HTC Vive or Oculus Rift, as currently they still offer a higher quality experience than standalone devices are able to deliver. Accordingly, CCS Insight forecasts that 5 million tethered VR headsets will be sold in 2019, growing to 18 million in 2022.

52 million VR and AR devices will be sold in 2022 with a market value of $8.5 billion Click To Tweet

Sony, which CCS Insight considers as the most successful manufacturer of tethered VR headsets to date, looks set to continue with its strategy of offering its VR headset as an accessory to the large number of PlayStation owners as these devices are best suited to meet the needs of the most dedicated gamers, who want a best-in-class experience.

The report also assesses the market for AR smart glasses, which have so far seen significantly slower adoption compared to VR. The main use for AR devices continues to be in business operations such as customer service, logistics, remote servicing, design and other related applications, and interest remains high in those categories. Although businesses have taken a cautious approach to AR devices, initially focusing on pilot deployments, but CCS Insight believes there are signals of growth as the chart below demonstrates.

The company believes devices such as Facebook's Oculus Go and Oculus Quest, which are being offered at retail prices of $200 and $400 respectively, are good examples of the future of VR Click To Tweet 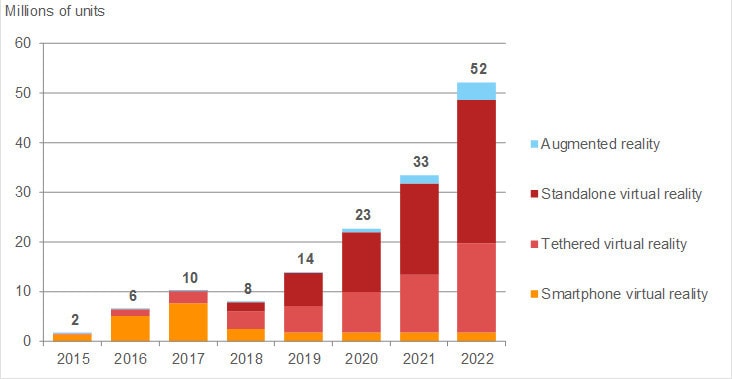 “We are seeing a rising number of companies committing to deployments of tens or hundreds of augmented reality glasses as they start to see the clear benefits of head-worn technology in the workplace,” explains Wood, although he cautions that this market growth will take time, with cumulative global sales not expected to top 1 million units before 2021.

When thinking about AR glasses for consumers, Wood notes that these devices continue to be “more common in science fiction than in real life” with little evidence of a product with mass-market appeal any time soon. Nevertheless, CCS Insight’s long-range forecast does include a scenario of accelerated adoption if a major consumer brand like Apple decides to enter the market.

Yet in Tech Trends’ humble view, with Magic Leap finally entering the arena this year and a new version of the HoloLens expected to be unveiled by Microsoft next year, it could be that this tipping point might arrive even sooner, and perhaps even driven (perish the thought!) by players other than Apple. Watch this space…