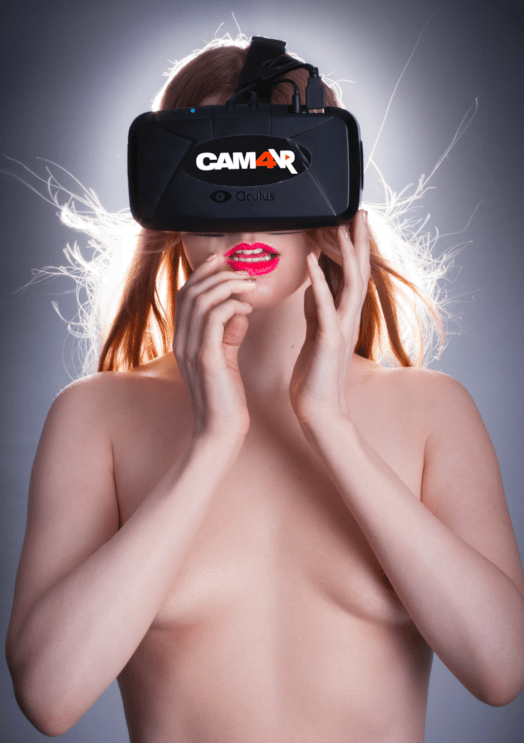 Well, screw that – literally – says pornographer Ela Darling, co-founder of VRTube. If you’re looking for the usual story of abuse and deprivation leading a promising young woman astray into the clutches of an exploitative industry, you’re fresh out of luck. Following a happy childhood surrounded by a close-knit supportive family, Ela graduated with a Master’s degree at 21 and landed a stable job as a Associate Director and Head of Reference at a Massachusetts library. She was happy until she got hit by a serious case of existential ennui, which gave her an itch to see what else was out there. Quite a lot, as it turns out:

I thought to myself: “Do I want the rest of my life to start at 22?” I had a lot more free time working this full time job than I did in college, when I was taking an inadvisable number of classes while working two jobs. I had been modeling since I was 18 and decided to try something more risqué just for fun. I made more money in an hour than I made in a day working at the library, and more in a day than I made in a week. I shot a few more times before realizing that this was a viable career option and if I wanted to seize it, I should do so immediately. They say “fortune favors the bold” so I took a chance and I moved out to LA where I shot my first hardcore porn scene. From there it was history.

When I was on set for my very first porn scene, my parents called me and asked what sort of photoshoot I was doing. I hesitated for a few seconds before telling them the complete truth. They taught me that there is no truth too hard for them to handle and that they will support and love me through anything I can throw at them, but the worst thing I can do is lie to them. It’s something I’ve carried into my adult relationships: the expectations I have in my personal relationships are “Honesty, Respect, Communication.” These are characteristics instilled in me by my parents and I’m so grateful to them.

It’s funny, because when I was a librarian some of my patrons called me a “hot librarian” but now people call me a “smart pornstar” and to be honest, I’d rather be the “smart” anything than the “hot” anything. I know that guys are into the sexy librarian fantasy, which I also think is alluring, but I try not to hypersexualize the people in a career which is often undervalued and I try to support libraries as much as I can. At AVN, if my fans show me their library card, I’ll show them my tits, but I also encourage people to realize that librarians are freedom fighters for privacy and our right to access information. They’ve gone to jail to defend our rights to consume information without censorship. Librarians are pretty badass.

Women are still taught in schools that their sexuality is like a piece of gum: once it’s been chewed by one person, nobody wants it anymore. We’re taught that our bodies are LITERALLY GARBAGE if we have the audacity to have sex. Men and women both feed into this harmful notion that women who have sex are inviting disaster or rape. There are people who stand at adult conventions with signs telling us we deserve rape.

What’s that phrase men talk about desiring? A lady in the street but a freak in the bed? Even the men who want to fuck us want us to pretend we don’t fuck when we’re in public spaces. I’m pleased to see a sex-positive and porn-positive movement of feminism that is inclusive of marginalized individuals. I do think that women feel more agency over their sexuality when they see women like me own it positively and unapologetically. I’ve had women tell me this personally and every time I hear it, it makes me feel stronger, like the work I do truly matters. It’s incredibly gratifying.

I started focusing on Virtual Reality after I met my business partner James Ashfield in 2014. I had been interested in VR since the first time I tried the Oculus Rift at E3 (the Electronics Entertainment Expo) several years ago. When I saw a post on Reddit about someone wanting to start a VR porn company, I seized the opportunity and reached out to him immediately. A month later we shot our first scene in his college dorm room, which I found very funny. When we watched the footage, we were blown away by how intimate and engaging the experience was, so we quickly realized that we were on to something great. We officially founded VRTube shortly after. Recently, we’ve teamed up with our new business partners Cam4 and we’re about to launch a sensational new approach to Virtual Reality live camming.

The response has been sensational. Initially people questioned Virtual Reality and assured me it was a gimmick that I was wasting my time on. Slowly, over the next two years, those people came to realize the value of it and they now ask me for advice on how to get started in it themselves. I see more and more VR producers entering the market every month and I’m excited to be on the cutting edge of this new content.

People’s fantasies don’t change because of the way they’re executed, but I think the way the viewer thinks about the hardcore porn they watch in VR will be much different than the way they think about it when they consume it through traditional platforms. When I watch Cam4VR performers, I feel a much stronger human connection with them, but my desires and fetishes don’t change as a result. Instead, I feel like I can have a more realistic experience with them. I believe that Virtual Reality will give people more empathy for the people involved and perhaps make them more inclined to implement a more ethical, considerate approach to the sex they have in their private lives.

I’m a feminist and I find my work to be empowering. That said, I am exhausted with people who insist that sex workers explain how their work is empowering. How many other careers have to justify themselves through empowerment? Do construction workers get grilled over how empowered they feel while building homes? Does anyone ever look at their barista with pity in their eyes asking them if they really want to be here or if they’re just doing this job because they have no other options? It’s an extension of peoples’ personal guilt over their own sexuality and I’m so tired of having that guilt projected onto my body and my career. I make money from the work I do. What’s more empowering than doing something I’ve chosen for myself and being able to support myself, my family, and my lifestyle? Through my porn work, I’ve been able to co-found a company without any big investors. That’s some empowering shit right there. But more than that, it’s the job I’ve chosen and it makes me happy.

Through my work, I've been able to co-found a company big investors. That's some empowering shit right there Click To Tweet

One of the biggest events in the XR calendar is back in person this year,...

By Laura Kobylecky I am alone in the empty streets of Austin. Everything has been...

Deepfakes are a hot topic, including at #SXSW 2021. By Laura Kobylecky Some people see...